You are at:Home»MARKET PREVIEW»CAD lower on dovish Bank of Canada; US Jobless Claims, BoJ Meeting 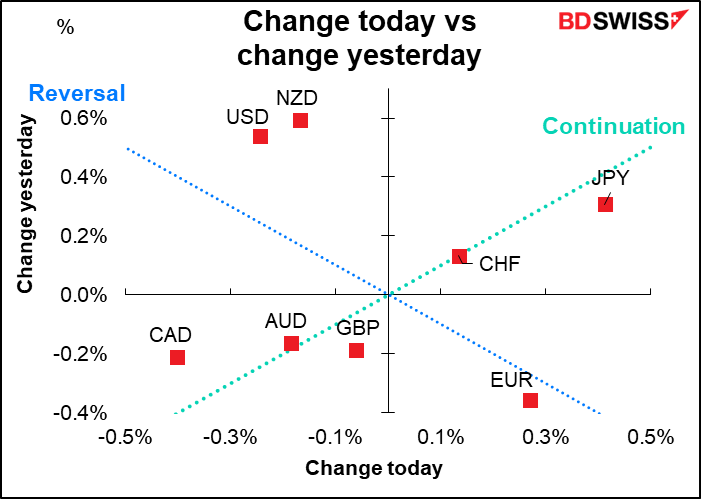 Market Recap
A neither-here-nor-there day for risk as most stock markets were little changed. S&P 500 was up a bit, NASDAQ was down a bit, not much there. The STOXX 600 did hit an intraday record high but closed slightly (-0.09%) below Tuesday’s record close.

The bond markets were more enthusiastic as Fed Chair Powell’s reassuring testimony enabled Treasuries to end their three-day decline. In his prepared remarks, Powell basically just repeated what everyone knew from the FOMC statement and minutes, but it was reassuring to hear it once again anyway: that the FOMC still views the US economy as “still a ways off” from having met the “substantial further progress” benchmark necessary for the Fed to start tapering its asset purchases. During the Q&A he said that the FOMC will be discussing tapering at the July 28th FOMC, but that as promised, they will give the market ample warning before doing anything. (The Fed did not “want to surprise markets or the public.”) Powell also admitted that the inflation data so far has been “higher than expected and hoped for” but he still sees much of the pressures as transitory. He pointed to lumber, which was up almost 400% yoy at one point but is now down 70% from its peak, as what could happen to many of the transitory factors. 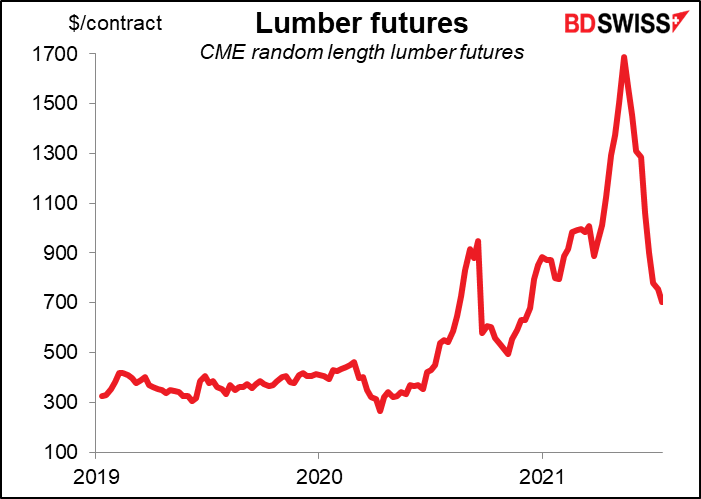 One notable point: Powell indicated how long “transitory” might be. He said inflation “is well above 2%. The question will be, where does this leave us in six months or so, when inflation, as we expect, does move down?” So we now have a guideline to judge when higher inflation might stop being just “transitory.”

Powell’s comments pushed down expectations of future fed funds rates by 4 bps in the long end. 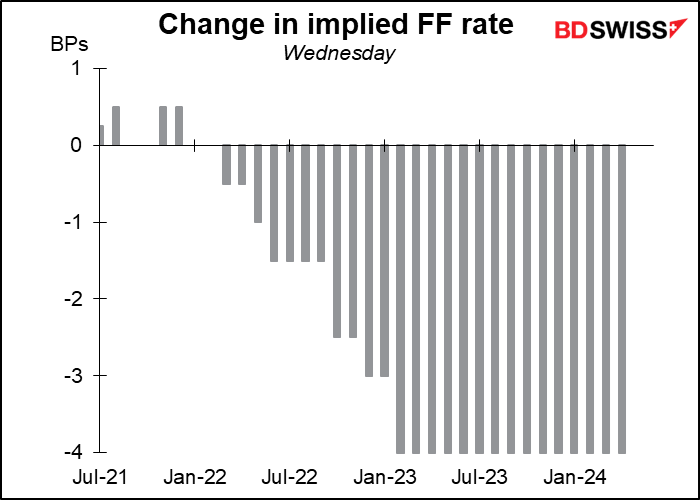 CAD was the biggest loser, in part because of the Bank of Canada decision and part because of the fall in oil. As you can see from the graph, USD/CAD was moving lower (i.e. CAD was strengthening) going into the BoC meeting, but then the pair jumped when the result was announced. The Bank did cut its weekly bond purchases to CAD 2bn a week from CAD 3bn, which is a tightening of policy. However, it left its guidance unchanged, that it wouldn’t be in a position to start hiking rates until “sometime in the second half of 2022.” 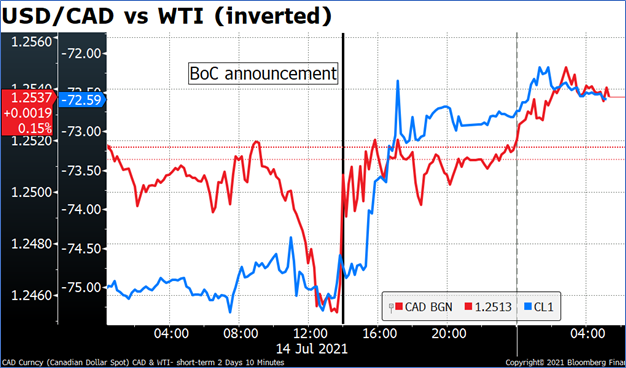 Here are the forecasts from the new Monetary Policy Report. Notice how they cut the growth forecasts while increasing the inflation forecasts for this year. They also said that there was “considerable excess capacity” in the economy and that the “recovery continues to require extraordinary monetary policy support.” That probably means lower real interest rates, which are a negative for CAD.

As a result, the market has pushed back slightly the expected date for Bank of Canada tightening. A week ago it was solidly March of next year, but now it’s sometime between March and June. (The overnight index swap (OIS) rates only go out to December; they show no hint of a rate hike by then.) 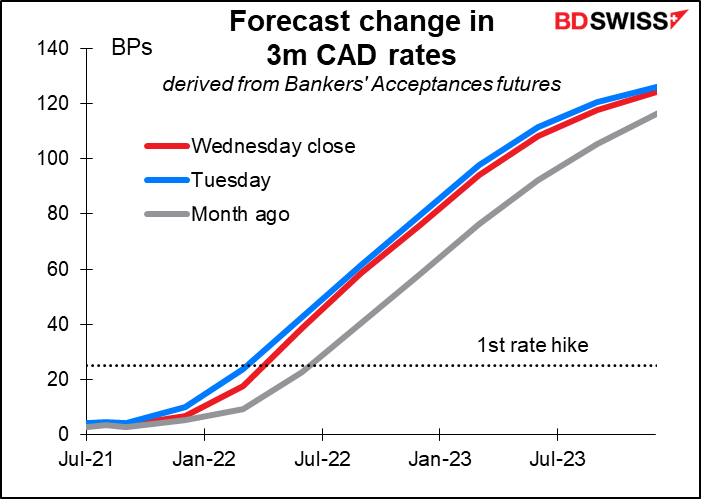 Having said that, oil fell sharply yesterday on reports that there has been progress in talks between Saudi Arabia and the UAE with regards to shifting the UAE’s baseline production level. As you may remember, OPEC+ members have pledged to reduce their output by a certain amount. That amount is measured from each country’s baseline production. The last OPEC+ meeting was unable to reach an agreement because the UAE demanded that its baseline, which was set on 2018 production capacity, be increased to take into account increased capacity that it’s developed since then. While allowing the UAE to change its baseline may open the door to other countries making similar requests – Iraq has reportedly been making noises along that line – not allowing the UAE to do so risks a collapse of the production-restraining agreement and an all-out price war.

Besides, the International Energy Agency Tuesday warned that the oil market would tightening significantly if OPEC+ didn’t increase its output. The group pumped 40.9mn barrels a day (b/d) in June, the IEA estimates. Even if OPEC+ increases output this month by 400k b/d as planned, its output will still be significantly below the 43.45mn b/d that the IEA projects will be required from the cartel in the second half of the year.

Furthermore, the US Dept of Energy yesterday announced that distillate and gasoline inventories rose in the latest week, as did domestic crude production. This despite a much larger-than-expected drawdown of inventories overall (-7.9mn barrels vs -4.0mn expected). I therefore think the outlook for oil – and CAD – remains good. 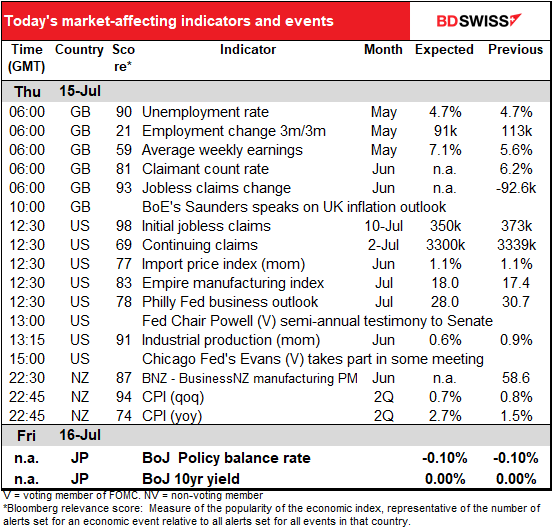 We’ve already had the UK employment data. It was mixed: the unemployment rate rose instead of staying stable as employment rose less than expected. But average weekly earnings rose more than expected, although that may be influenced by the mix of people going back to work.

Next up are the dreaded US jobless claims. Initial claims are forecast to be down by 23k, which would be pretty good therefore probably positive for the dollar. Over the last six weeks, the average has been only -5k (and no change at all over the last four weeks). Remember, these are people newly losing their jobs. This is quite extraordinary so long after the pandemic hit. 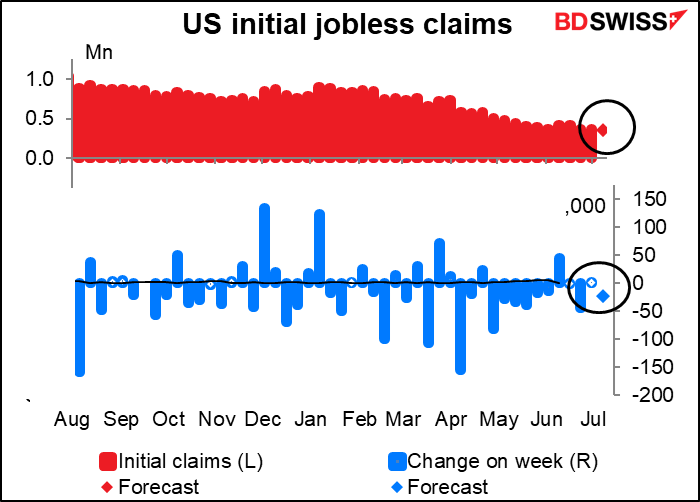 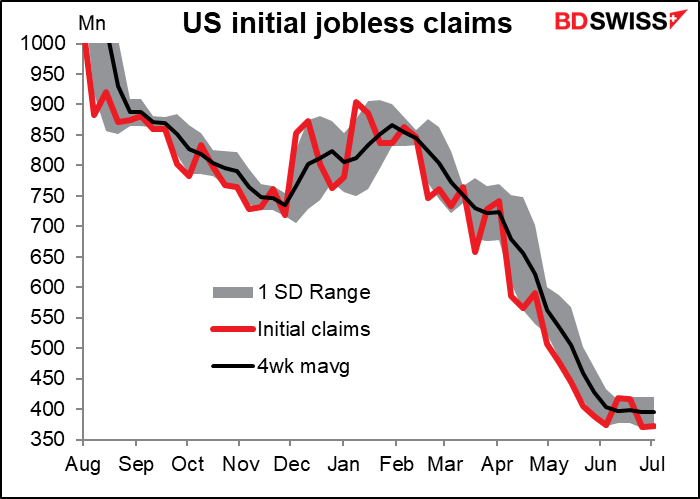 Continuing claims are attracting more attention as the heartless Scrooge McRepblican governors terminate federal unemployment benefits early just to deny them to people in an effort to force them to take dangerous, underpaid jobs. Continuing claims are expected to be down by 39k, which is a lot less than what you’d expect if slashing benefits was indeed forcing people to take jobs. 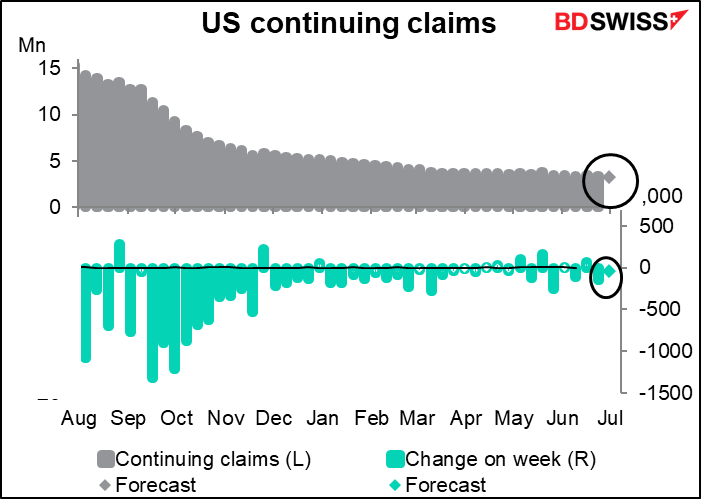 The Empire State manufacturing survey and Philadelphia Fed business survey are coming out together again this month, as they back in April. The Empire State index is expected to be up a bit and the Philly Fed index down a bit, but neither is forecast to move significantly. Both should show continued expansion in their territory, which would be positive for the dollar. 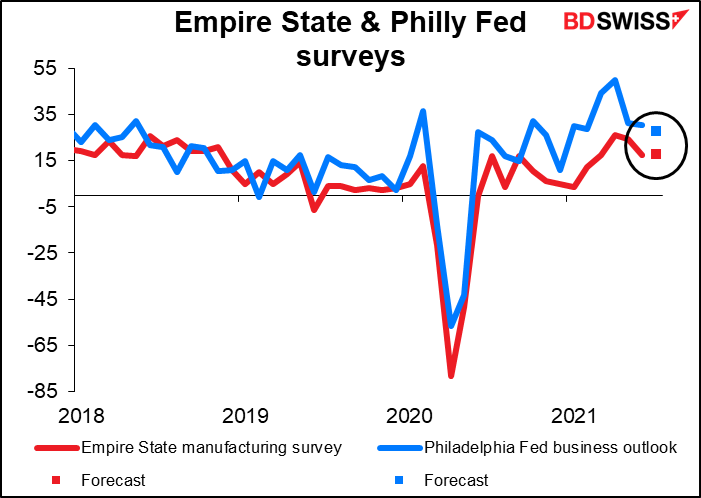 Aside from the headline figures, investors will be watching some of the more forward-looking components to see whether the supply bottlenecks are likely to persist. So far the signs are no. 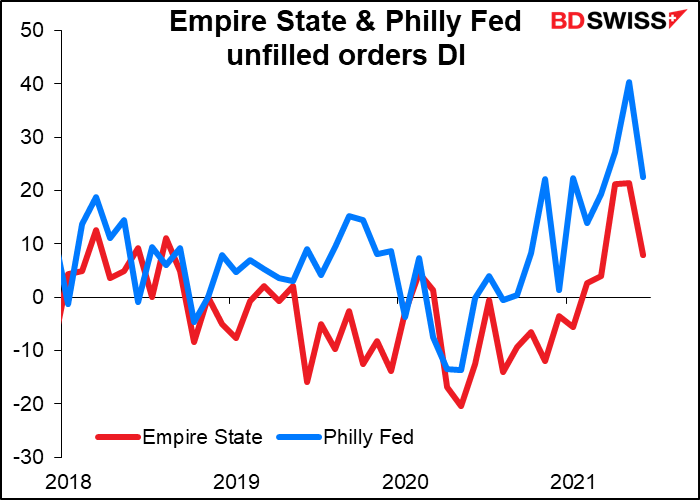 But the inflation warnings are still there. 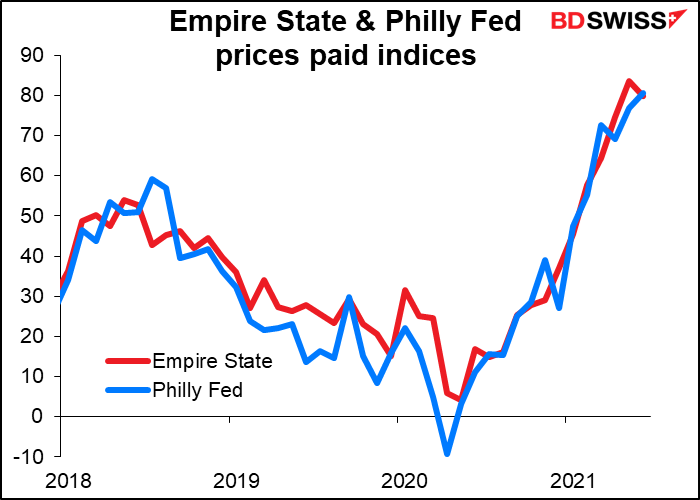 Fed Chair Powell reprises his performance in Congress. Yesterday it was the House of Representatives, today it’s the Senate.

US industrial production doesn’t seem to be a major indicator for the FX world, but it’s closely watched overall. The market is expecting a solid if unspectacular 0.6% mom increase, which should corroborate the view from the above Fed surveys: the economy continues to expand. 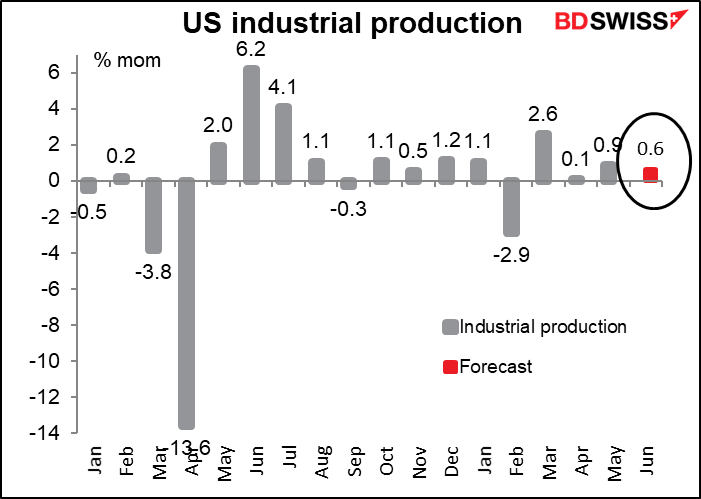 Overnight, New Zealand announces its consumer price index (CPI). It’s expected to skyrocket, although still within the Reserve Bank of New Zealand (RBNZ) target range. This shouldn’t alarm anyone at the RBNZ though. After Wednesday’s RBNZ meeting Wednesday they said, “…there will be near-term spikes in headline CPI inflation in the June and September quarters. These reflect factors that are either one-off in nature, such as high oil prices, or expected to be temporary in duration, such as supply shortfalls and higher transport costs… The Committee noted that medium-term inflation and employment would likely remain below its Remit objectives in the absence of some ongoing monetary support.” 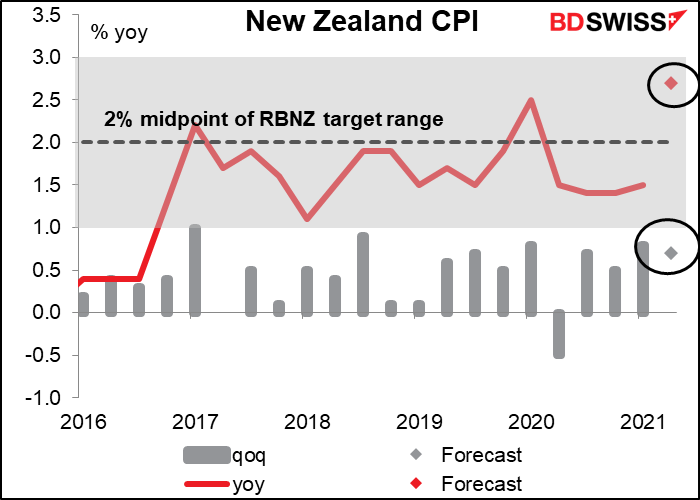 Finally, there’s a Bank of Japan Monetary Policy Meeting today. Usually I put the central bank meetings first, but BoJ meetings are special, because nothing ever happens at them. There is no chance that they’ll change policy. Zero. ゼロ。Nada. Rein. It’s so, so boring. I’m so glad I’m not there any more. Can you believe I once wrote a daily comment on the implications of the BoJ’s money market operations? You can read my full comments in my Weekly Outlook, but why bother? Just look at this graph, which shows that after about 25 years of zero interest rate policy and more, Japan remains in deflation on a headline CPI basis. 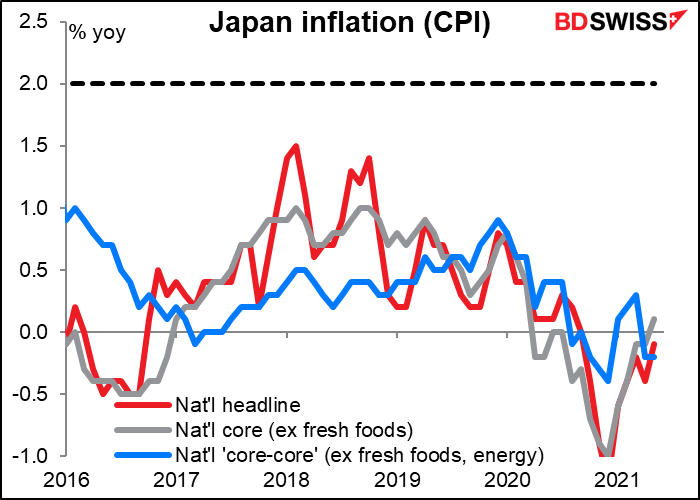 There is one thing on the agenda: at the previous meeting in June, the BoJ decided to lend money to financial institutions to on-lend for projects to address climate change. It will unveil the preliminary outline of the scheme at this meeting before launching it later in the year. Also, there’s a new Board member, former Nomura Asset Manager CEO Junko Nakagawa, the token woman on the Board. (As far as I can remember, there has never been more than one woman at a time on the Monetary Policy Board.) Her views seem to be in line with the BoJ consensus so she probably won’t rock the boat. Finally, Bloomberg reported that the Outlook Report (Outlook for Economic Activity and Prices) will raise the forecast for inflation in the current fiscal year(04/21-03/22). But since they won’t change policy in response, who cares? 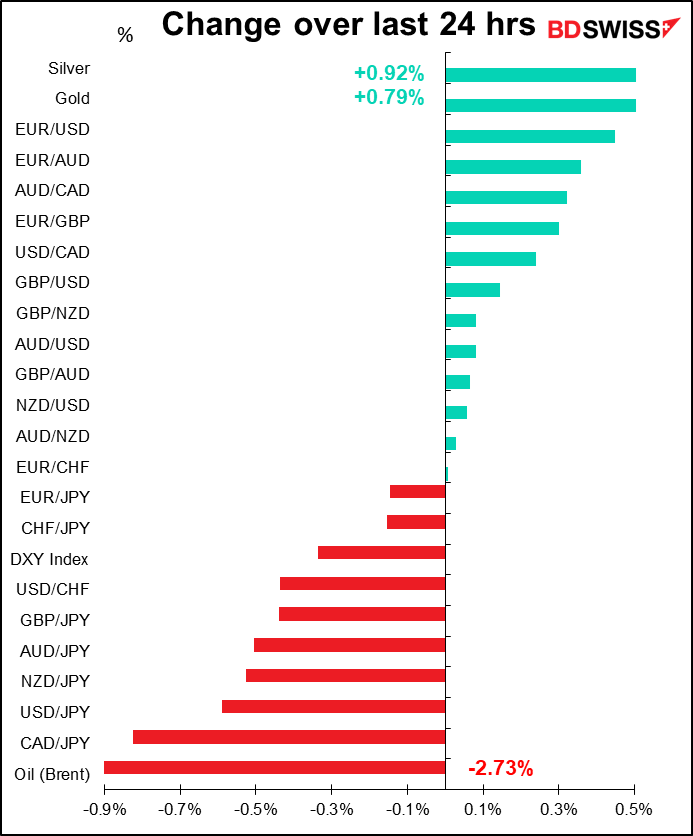