You are at:Home»MARKET PREVIEW»Commodity Currencies Up, JPY Down as Risk Appetite Returns; US CPI, RBNZ 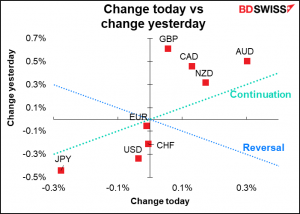 Risk appetite recovered yesterday – was it a Euro 2020 phenomenon? Asian stocks were generally lower, but European markets generally rose, led by Italy, +0.9%.The FTSE 100 on the other hand was up a mere 0.05%. US markets followed suit, with the S&P 500 gaining 0.35% to move further into record territory. US Treasury yields rose once again and most commodities recovered too (except for oil). In any case, investors seem to have gotten over last week’s shock at the stunning acceleration in new COVID-19 cases.

It really is shocking. Look at the Netherlands! 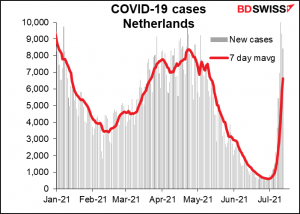 Look at Cyprus, for that matter! 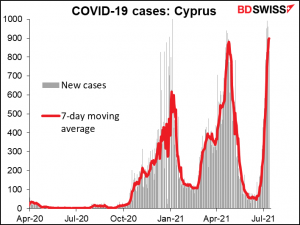 In FX it was mostly a “continuation” day. The positive risk sentiment helped the commodity currencies recover further and JPY to weaken. USD, CHF, EUR, and GBP were largely on the sidelines. Overall moves were subdued as the market awaits today’s US consumer price index (see below) and tomorrow’s Congressional testimony by Fed Chair Powell.

EUR has been quite dull recently. ECB President Lagarde’s comments over the weekend that the upcoming ECB Council meeting on July 22nd would be “an important meeting” where “forward guidance will certainly be revisited” had surprisingly little impact yesterday. Lagarde said she expects the ECB’s EUR 1.85tn Pandemic Emergency Purchase Programme (PEPP) bond-buying plan to run “at least” until March 2022 (no surprise there, as that’s in the official ECB statement). The surprise was that she said when it ended, it could be followed by a “transition into a new format,” whatever that means.

EUR/GBP has been remarkably stable for some time now. Since February it’s ranged between 0.87 and 0.85

Looking at positioning, speculators are long EUR/GBP. (I calculate this by subtracting their net GBP position from their net EUR position.) 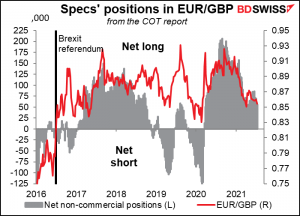 While hedge funds have a small net short. 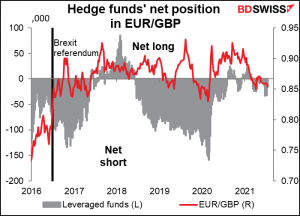 It seems to me that as EUR/GBP approaches the recent support line, positioning is not going to provide any support. Speculators are not yet positioned to take advantage of a decline in EUR/GBP. If it begins, there could be significant momentum behind the move as speculative positioning shifts. 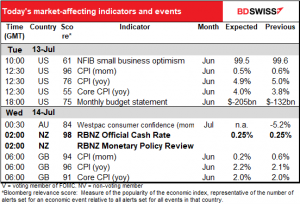 Two big things on the schedule today: during the US day, the US consumer price index (CPI) and then overnight, the meeting of the Reserve Bank of New Zealand (RBNZ).

The US consumer price index (CPI) is the main indicator of the week. It’s not the Fed’s preferred inflation gauge; that’s the personal consumption expenditure (PCE) deflator. However the market pays much more attention to the CPI and almost ignores the PCE deflators. (If you want to understand the difference between the two, I’ve written a piece explaining it. It’s available on our website here.) Thus this is a key indicator for the FX market.

The mom rate of increase in the headline figure, which is what the market pays the most attention to, is expected to slow by 10 bps. The yoy headline figure is also expected to slow by 10 bps, while the core figure is forecast to rise by 20 bps. The market seems to pay more attention to the headline figure than to the core figure though so the fact that it is slowing on both a mom and yoy rate of change could encourage investors to think that the worst is over for inflation, it is indeed likely to be transitory as the Fed has been saying, and there’s no urgency to tighten policy any time soon.

That would tend to cause US rates and inflation expectations to decline, which recently has gone along with a stronger dollar. 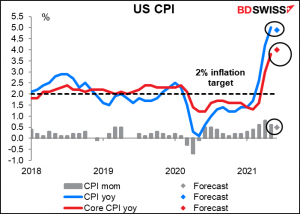 There were signs last month that the price increases in sectors hit by the pandemic were beginning to come back to earth. People will be scrutinizing these sectors, particularly the notorious “used cars and trucks,” to see if this higher inflation is indeed transitory. 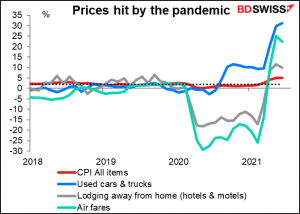 Unfortunately when we look at the average movement over the last few times, what we see is the exact opposite of what we’d expect: on average the dollar weakened (EUR/USD moved higher) in the days following a positive surprise and strengthened (EUR/USD moved lower) in the days following a negative surprise, also when the CPI hit estimates exactly. 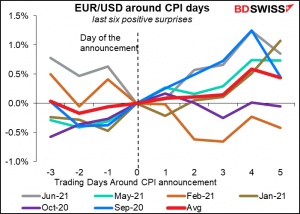 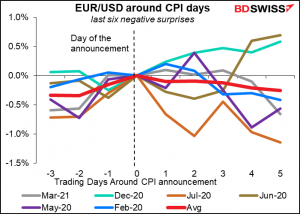 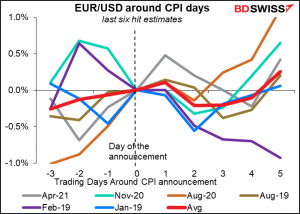 Recently however falling rates and falling inflation expectations have gone along with a stronger dollar, so this pattern might not be so strange after all. 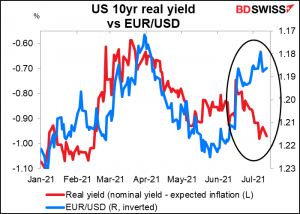 I discussed the RBNZ meeting in great detail in my Weekly Outlook, The End of Euphoria. This is just a pale shadow of the richly detailed explanation I had there, plus some reaction graphs.

The RBNZ is likely to keep both its official cash rate (OCR) and its large-scale asset purchase (LSAP) program unchanged. The main question is what changes if any do they make to the forecasts in their quarterly Monetary Policy Statement (MPS).

Q2 CPI for New Zealand comes out on Friday; I don’t know if they’ll have the data in time for Wednesday’s meeting, but the forecast is for a leap to 2.7% yoy, near the top of their 1%-3% target band. That’s higher than anticipated in the April MPS, which said they expected inflation to peak at around 2.6% in the near term and that this high level would be “transitory,” which seems to the central bankers’ mot du jour. I expect the RBNZ to be somewhat more hawkish about inflation as a result. 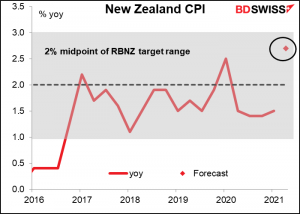 On the other hand, they can’t be too hawkish, because the slow progress of vaccination and their “zero tolerance” policy has left the country vulnerable to an uptick in virus cases, which would cause an immediate lockdown (so far no problem, but no one can afford to relax). 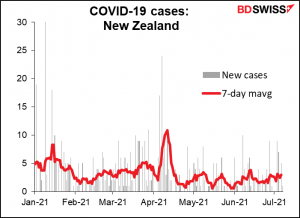 On balance I would expect no change in policy but a more hawkish outlook with regards to inflation, which could give NZD a boost.

Then tomorrow morning we get the UK CPI. Headline inflation is expected to move a bit above the Bank of England’s 2% target. This will come as no surprise to the Bank of England, which said last month that “CPI inflation is expected to pick up further above the target, owing primarily to developments in energy and other commodity prices, and is likely to exceed 3% for a temporary period… the Committee’s central expectation is that the economy will experience a temporary period of strong GDP growth and above-target CPI inflation, after which growth and inflation will fall back.” So while higher inflation may be temporarily positive for the pound, I doubt if it will weigh on the Bank of England’s decision at its August 5th meeting. 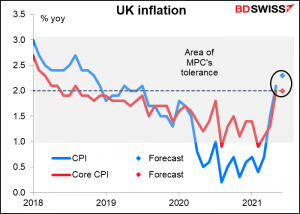 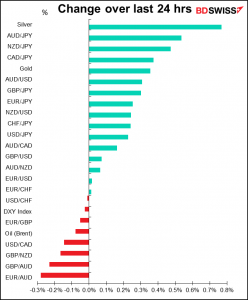