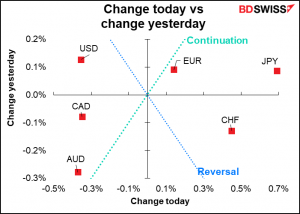 Normally I try to avoid discussing the previous day’s economic indicators, because that’s by definition yesterday’s news and I want to focus on today’s news. But we can’t explain where the market is today without mentioning the shocking disappointment of Friday’s University of Michigan consumer sentiment survey. It was expected to be unchanged at 81.2; instead it plunged to 70.2, which is not only below the April 2020 pandemic low of 71.8 but also the lowest since Dec. 2011. This turnaround in sentiment created questions about the strength of the US economy going forward.

At the same time, several moderate House Democrats threatened to withhold support from the $3.5tn budget resolution unless blah, blah, blah, I won’t bore you with internal Democratic Party politics. It all boils down to this group is demanding this and that group is demanding that and since the party only has a tiny majority in both the House and the Senate, any group can hold everyone else hostage. The dispute is important because it’s another potential stumbling block for this program, and if the US consumer is turning pessimistic and the US government can’t pass a stimulus package, then the US economy is likely to slow down considerably. 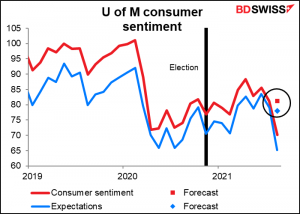 Adding to the concerns over global growth, the Chinese economic data for July came out weaker across the board.

On top of which we have the debacle in Afghanistan and the spread of the delta variant, and it’s beginning to look like the plot of a summer disaster movie.

Most Asian stock markets are down this morning as a result, even in Japan, the source of the only good news around – Japan Q2 GDP rose 0.3% qoq, beating estimates of +0.1% qoq growth. Nonetheless the TOPIX was down 1.6%, which is a pretty big raspberry to such a good GDP figure. Is that because of the looming extension of the State of Emergency in Tokyo?

As a result of all this, the safe-haven JPY and CHF were up. It’s noticeable that USD is not behaving like a safe-haven currency this time around but rather like a growth-sensitive currency – the “domestic dollar” instead of the “international dollar.”

The growth-sensitive AUD was the worst performer. It got a kick in the pants from news that the lockdown in Melbourne would be extended for two weeks until Sep. 2nd.

Despite all the concerns on Friday, Europe’s STOXX 600 managed to rise further into record territory. It’s been up 10 days in a row now, its longest such run since 2006. Alas the futures this morning are predicting it will open -0.5%. Similarly with the S&P 500; it also managed to close higher Friday, but the futures predict it will open down 0.3%.

The risk-off mood seems to be continuing. That would suggest further strength for JPY & CHF and further losses for the commodity currencies. At the same time, we all know the lesson of the last 10 years: buy the dip. We’ll just have to see what will cause that change in sentiment.

Speculators added somewhat to their small long USD position. This came mostly by decreasing EUR long and increasing AUD and JPY shorts. Against that, they flipped from a tiny GBP short to a small GBP long. 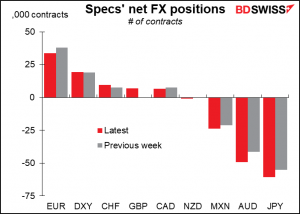 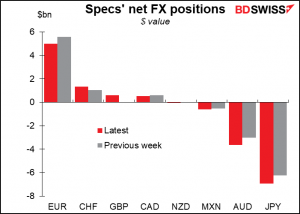 Hedge funds were mixed: They reduced their AUD, CAD, and MXN longs but increased their GBP and CHF longs while trimming their JPY shorts. 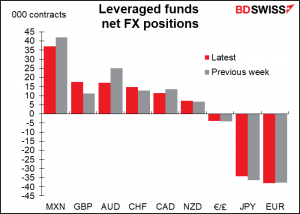 Retail was generally more bullish dollars: they cut their MXN, GBP, and EUR longs while increasing their JPY, CHF, and AUD shorts. 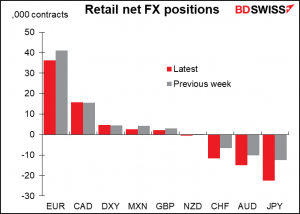 Speculators were less optimistic about the precious metals; they reduced their longs in both gold and silver. 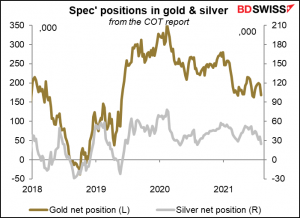 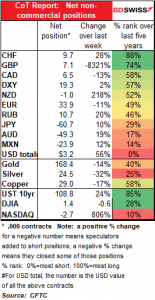 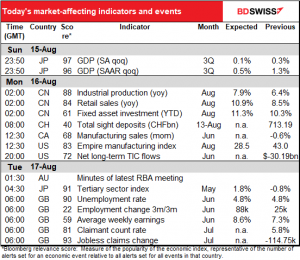 Swiss sight deposits: The previous week, the Swiss National Bank (SNB) finally came in and whacked the moles. The result was a rise in EUR/CHF back above the 1.08 level. However it’s not that far above it right now – 1.08019 as I write this on Sunday morning, instead of being out at the beach where I belong. That suggests either they didn’t do much in the latest week or it’s taking a lot of intervention to keep the rate from falling. 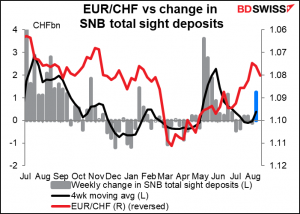 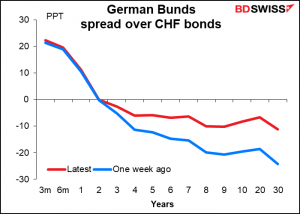 The Empire State manufacturing survey is expected to show a big (-14.5) drop in the index. This is in contrast to Thursday’s Philadelphia Fed business survey, which is expected to show a 2.1-point increase. Why the discrepancy? My guess is that economists are looking for a bit of mean reversion. The Empire State index jumped last month while the Philly Fed index didn’t, so perhaps last month was an anomaly caused by the reopening and it will subside to more normal levels. Over the lasts five years, the Philly Fed index has averaged 9.1 points over the Empire State index. Last month it was 21.1 points below it. It’s only been that wide or wider five times since the Empire State index began in 2001 (the normal range over the entire series is ±11.4 points).

I think the market would accept such a decline as a normal reaction after the jump in the previous month and as long as the Empire State index remains above 20, it would be seen as indicating continued strong growth which is positive for the dollar. 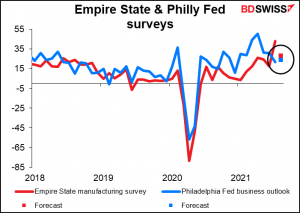 The Treasury International Capital (TIC) flow data is of largely academic interest to people like me and not of much use to day-to-day traders, because it’s several months late and pretty general. Moreover there are no forecasts for this series. What it’s been showing recently is that the US is seeing a continuous inflow of funds into US bond markets, which has been one of the things supporting the dollar, no doubt. 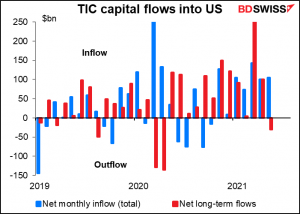 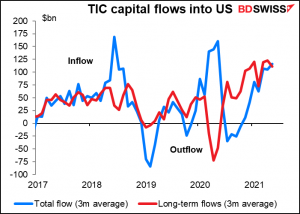 Overnight, the Reserve Bank of Australia (RBA) releases the minutes of its Aug. 3 meeting. If you recall, the RBA surprised the market (and me) by not doing anything to loosen policy despite two-thirds of the population being in lockdown.

In his testimony to Parliament on the 6th, RBA Gov. Lowe said that they considered delaying the tapering of their bond purchases, but decided not to because it would take too long for the move to affect the economy. They expect “a return to strong growth next year,” which is when the bond purchases would have their maximum effect “and only a very small effect right now when the extra support is needed most.” “Fiscal policy is the more appropriate instrument for providing support in response to a temporary and localized hit to income,” they said.

The market will be looking for any further clarification on this decision and on Lowe’s comments that the Board will “keep the situation under review and are prepared to act in response to further bad news on the health front that affects the outlook for the economy over the year ahead.” However I don’t know what else there is to say on the topic after his 2,125-word opening statement to Parliament plus the rest of his testimony.

Japan’s tertiary sector index is expected to be up.in June following two months of declines. No surprise since both the service-sector purchasing managers’ index (PMI) and the Eco Watchers’ Survey rose in June, too. 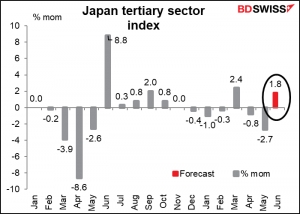 Then while the sun rises over St. Paul’s Cathedral and the melon-heads start arriving at their offices in the City (OK, I know no one wears bowler hats any more and anyway, they’re all still working from home), Britain announces its employment data.

The official jobless rate is expected to remain the same even as the number of jobs increases by a solid 88k. That implies a higher participation rate, which indicates an improving labor market as the economy starts to reopen. 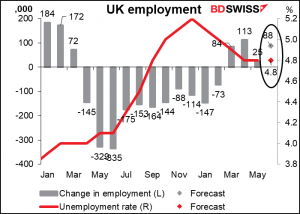 Average weekly earnings are expected to grow at an increasingly rapid pace. People will be watching for signs that companies are having difficulty recruiting workers, as the Bank of England has highlighted (“There appear to have been difficulties in matching available jobs and workers. These frictions are for a period reducing effective supply in the economy.”) If this continues, then wages would continue to rise, something that central banks generally look on with horror as they exercise their unstated but crucial role as enforcers of the class structure and the last bulwark of defense of the ruling class in their exploitation of workers. In short, if workers start to earn so much more that less is left for the managerial class, the Bank will raise interest rates and cause mass unemployment to force the desperate workers to take whatever jobs at whatever salaries they can get. Only the Bank won’t describe it as that – they’ll just say they’re “fighting inflation.” 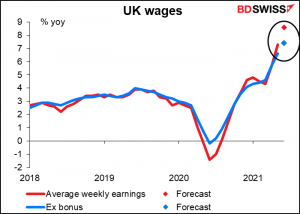 The jobless claims and claimant count rate have no forecasts but still a high Bloomberg relevance score. The higher relevance number may be a holdover from the old days, when they were the focus of attention. The UK Office for National Statistics (ONS) stopped including them in its statistical bulletin from March 2017, because, it said, the series “may now be providing a misleading representation of the U.K. labor market.” 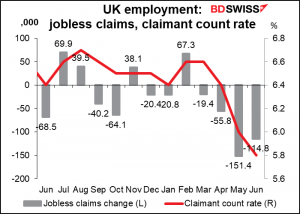 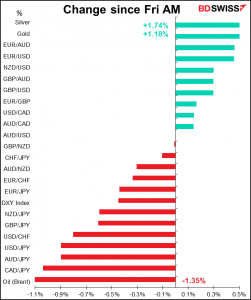