You are at:Home»Market Insights»November FOMC: Waiting to see what happens

The Federal Open Market Committee (FOMC), the rate-setting body of the US Federal Reserve, meets on Wednesday, the day after the election. There hasn’t been an FOMC meeting in an election week since 1984. Looking back at the minutes to that meeting, the Committee didn’t hesitate to take action (they loosened policy a bit) the day after the election. However if I remember correctly, back in those days the Fed didn’t announce its decisions, but rather market participants had to deduce them from the Fed’s subsequent actions in the market. Hence the-then glamorous occupation of “Fed watcher.” Nowadays of course transparency is the name of the game and any decisions will be instantly apparent and explained in depth & detail in the Chair’s press conference.

Listening to a number of Committee members recently, they all seem to be singing the same song, which I mentioned in my Weekly Outlook of 25 September:  Please sir, I want some more.” Some more fiscal stimulus, that is. That’s why I don’t expect any big changes or announcements at this meeting. I doubt if they would make any changes in policy just a few weeks before they might actually get what they’ve been pleading for. That would be a waste.

Their forecasts in September assumed further fiscal support, but that hasn’t been forthcoming. They could downgrade their outlook somewhat as a result, although it’s pretty bleak already.

In their forward guidance, they said they would be “prepared to adjust the stance of monetary policy, if appropriate” and that they would take into account “readings on public health, labor market conditions, inflation pressures and inflation expectations, and financial and international developments.” I could imagine that they add something more specific about fiscal developments into their criteria. The Fed tries to stay out of direct involvement in politics though so we can’t expect too much along those lines.

We’ll probably have to wait for the press conference to hear what the Committee members are thinking nowadays about further measures, particularly concentrating purchases in the long end of the market (as the Bank of Canada announced this week that it would do) or full-blown yield curve control (which I don’t expect yet). Fed Chair Powell is likely to provide some insight into how the Committee members’ thinking is developing about these matters. The other major topic to be addressed at the press conference is of course the Committee’s view on the economy, taking into account the worsening pandemic and the results of the election.

Otherwise, I just expect the Committee to once again stress its commitment to

crucial role that the virus will play in determining the path of the economy, especially given the recent surge in cases.

If you want to take a position on the meeting, EUR/USD would seem to be better than USD/JPY to get the most “bang for your buck.” 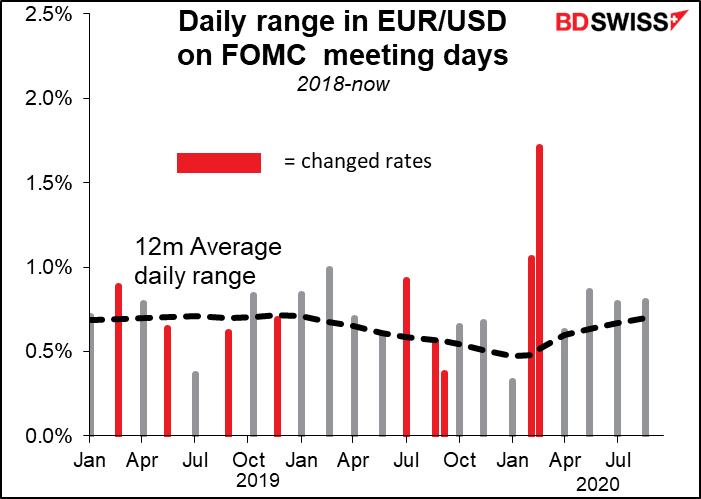 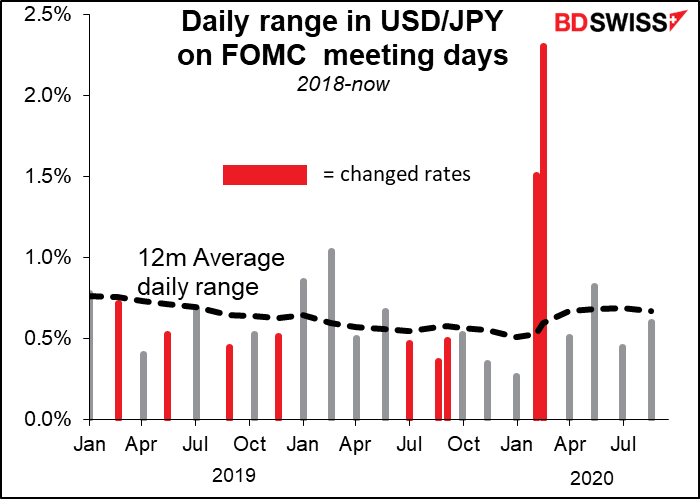