You are at:Home»MARKET PREVIEW»“Risk-on” mood as Biden Moves closer to Presidency; US Nonfarm Payrolls 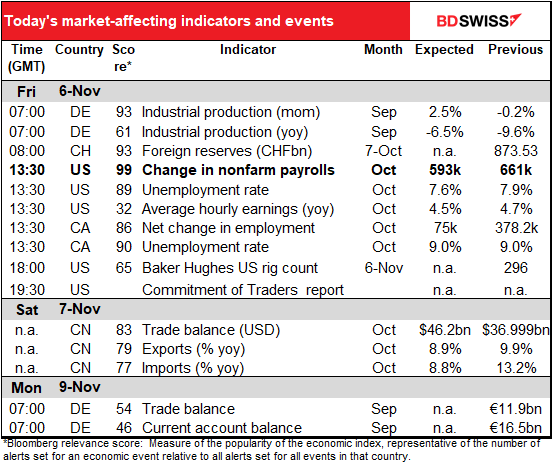 The FOMC statement was virtually the same as in September. The only meaningful change was the date. Powell emphasized the same points in the press conference that he’s been stressing for some time, namely the risks to the outlook from the pandemic and the need for more fiscal stimulus.

One wag on Twitter summed up the FOMC statement as follows:

I think we can sum up the markets pretty nicely in the same way:

Most of the market moves can be explained as a function of the “risk-on” environment flowing from the assumption that Biden is likely to win the US election while the Republicans are likely to retain control of the Senate. While Trump is gaining on Biden in Arizona, Biden is gaining on Trump in Pennsylvania and Georgia. If Biden wins Pennsylvania, that’s it.

I do think the mix of a Biden presidency and Republican control of the Senate is deeply negative for the dollar. I explain why in far more detail than you’ll ever want to read in my weekly comment, which will be out shortly. To sum it up, I think there will be less fiscal stimulus than would be the case under a “blue sweep” and therefore most of the support for the US economy will have to come through a looser monetary policy. If the Democrats do manage to win both the run-off elections in Georgia and wrest control of the Senate however my view would change 180 degrees.

GBP outperformed due to a less-dovish-than-expected Bank of England meeting. While the Monetary Policy Committee (MPC) increased the Asset Purchase Facility by GBP 150bn, more than the GBP 100bn that the market expected, there was no change in rates and, significantly, no mention of negative rates. Moreover the MPC projected that inflation would return to the target 2% level by the end of next year even without further rate cuts. Now that that’s out of the way, it’s back to worrying about Brexit.

The commodity currencies did well, especially the growth-sensitive AUD, on expectations that Biden would spend less time on trade wars and therefore would be good for global growth. Emerging market (EM) currencies did well as a result too; every EM currency that I track rose against the dollar yesterday (note that the graph tracks the performance of the dollar, not the currencies). 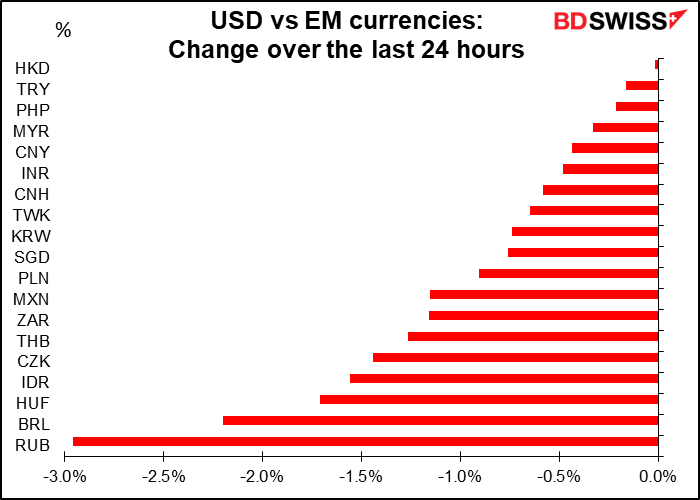 Separately, the US became the first country to record over 100,000 new virus cases in a day. The Associated Press observed that in 376 counties with the highest number of new cases per capita, the overwhelming majority — 93% — voted for Trump, a rate above other less severely hit areas. Yet 36% of Trump voters described the pandemic as completely or mostly under control and another 47% said it was somewhat under control, according to an AP survey. Meanwhile, 82% of Biden voters said the pandemic is not at all under control. This is a great example of Trump supporters’ willingness to believe whatever he says even if it contradicts the evidence of their own eyes. It helps me to understand why so many people now firmly believe that the Democrats are trying to steal the election even though the Republicans have not put forward even one single bit of evidence, as far as I know. 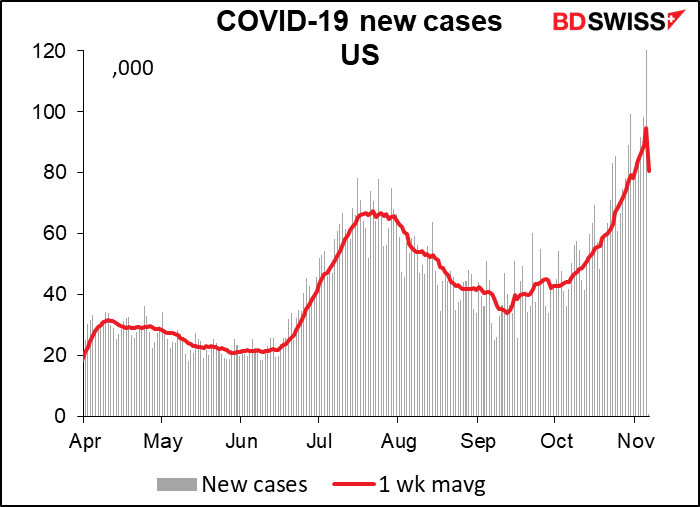 OK, the last of this week’s blockbusters:  the monthly US nonfarm payrolls. It’s being upstaged a lot by the weekly initial jobless claims, which give a more high-frequency picture of the labor market. And this week of course the elections are center stage, so we probably can’t expect much fireworks after the figure.

In any case, I think the NFP figure is going to be disappointing. Although it’s expected to show a continued rise in the number of people working, the increase is forecast to be down for the fourth month in a row, showing a slowing recovery. 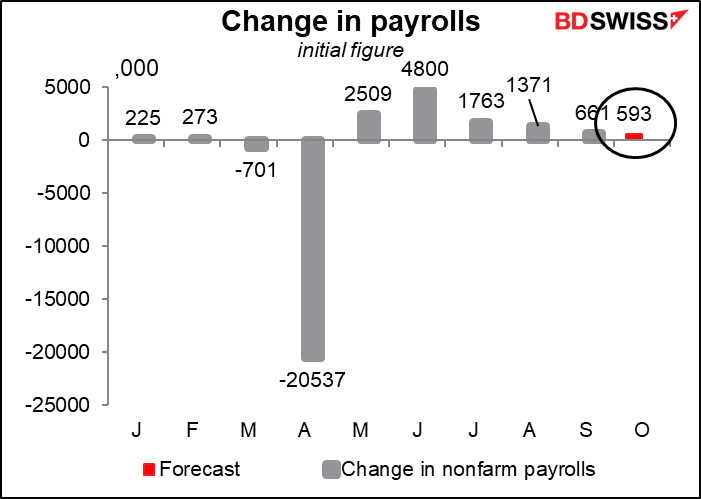 The unemployment rate is forecast to fall 30 bps to 7.6% from 7.9%, with an unchanged participation rate (so no help from people leaving the workforce). This is moving in the right direction, but still unacceptably high. And of course the U-6 unemployment measure, which includes underemployment and those not actively looking for a job because there’s no hope, is a much higher 12.8%. Still a bad situation, and getting better at a slower and slower pace. 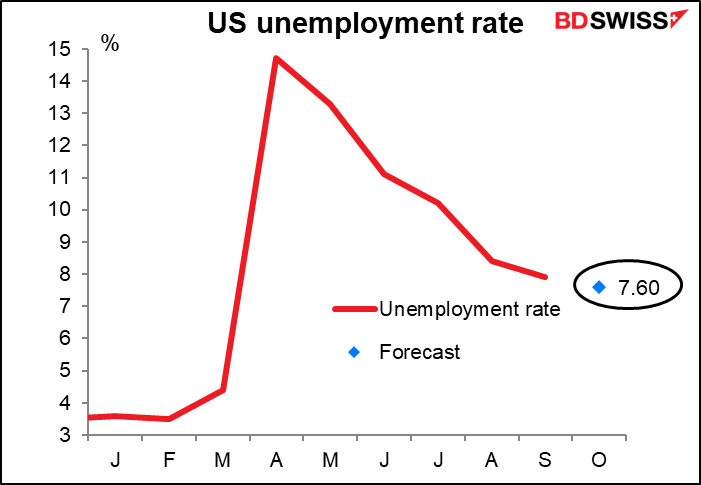 The number of people who are just temporarily laid off is falling, but the number who have lost their jobs permanently is rising. 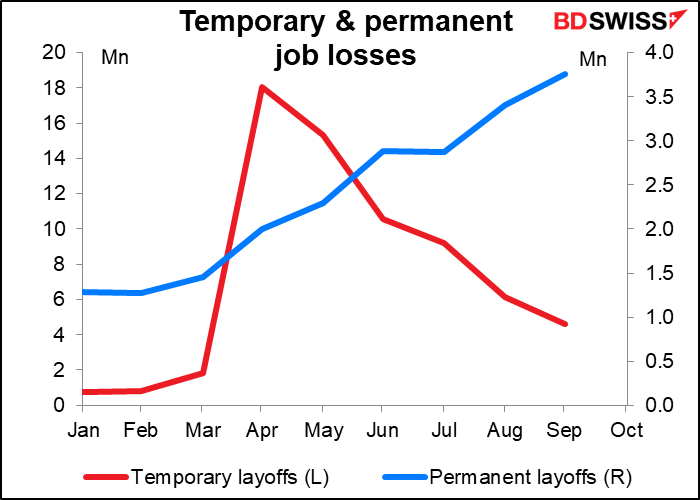 The question is, will the market see the glass as half-empty – a slowdown in the pace of improvement – or half-full – continuing improvement? I suspect the former and that this will be seen as negative for risk and therefore positive for the dollar.

Of course, if Biden breaks through in Pennsylvania today and clinches the Presidency, then the market may not pay much attention at all to the NFP. Actually, looking at the market reaction recently, they don’t seem to be paying that much attention to it in any case – the dollar’s range on NFP days seems to be narrower than usual regardless of whether the figure beats or misses expectations. 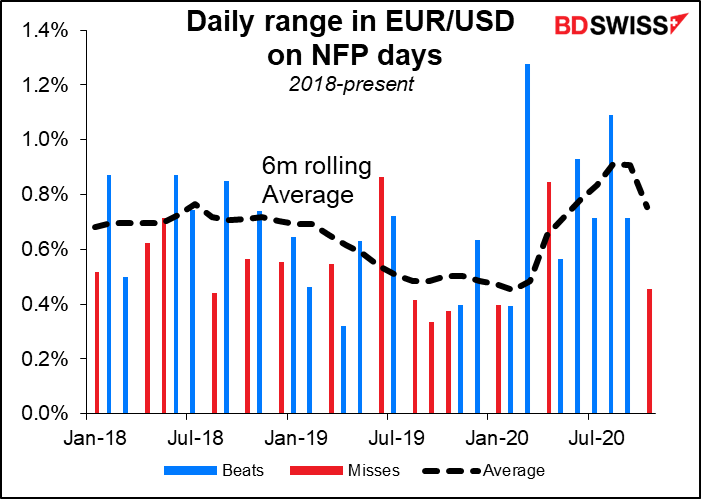 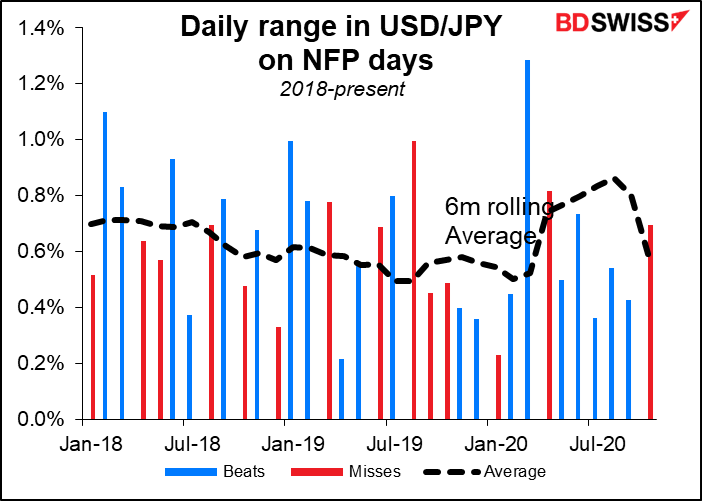 Meanwhile, Canada is expected to show the same sort of pattern in its employment data: a slowdown in job creation. 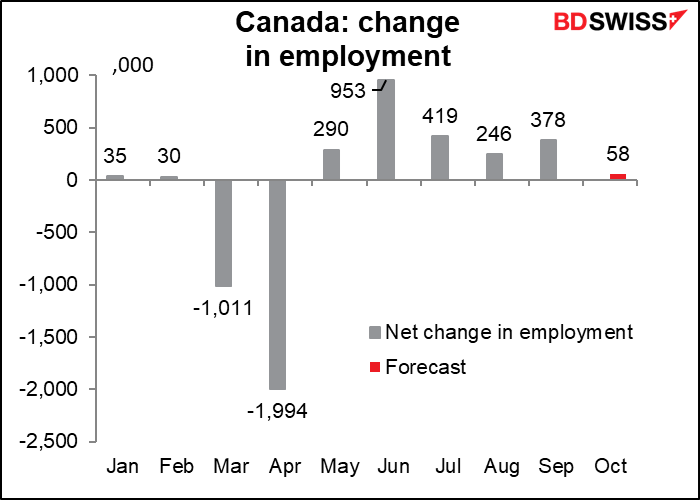 Plus only no decline in the unemployment rate. This could be negative for CAD if it encourages the idea that the Bank of Canada might have to ease further. Employment is taking over from inflation globally as the major indicator that central banks are watching. 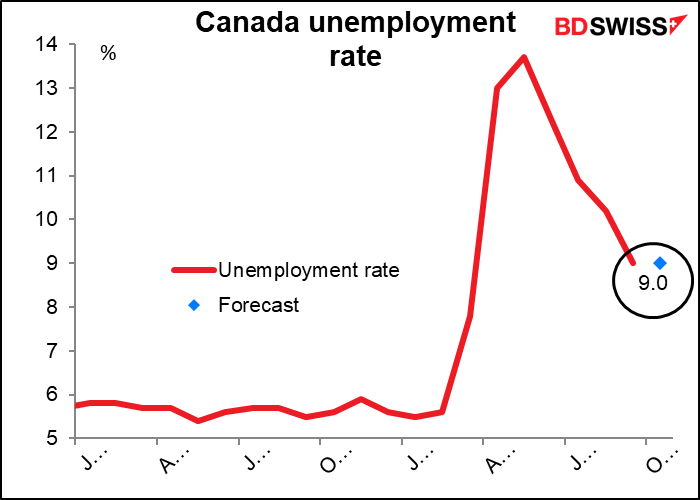 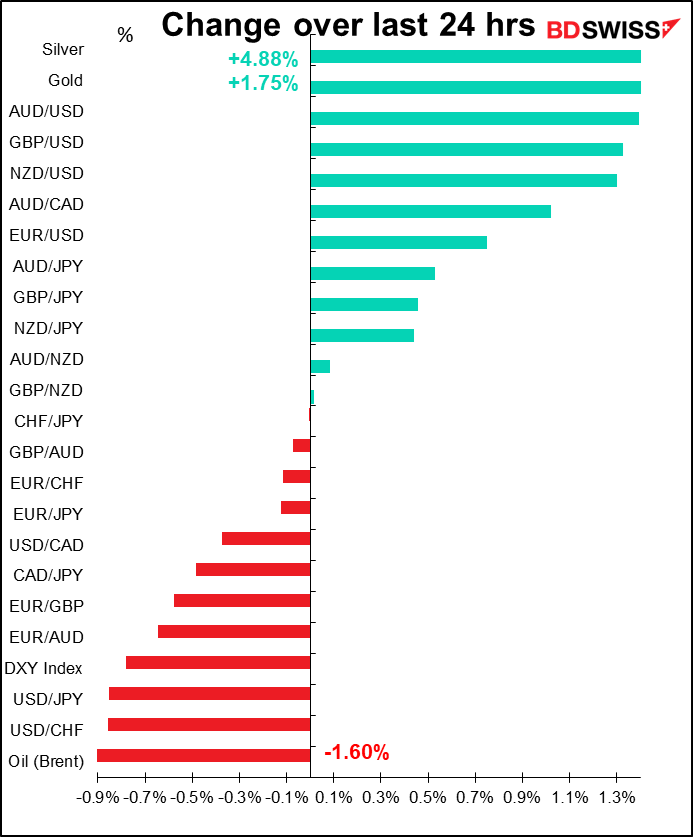