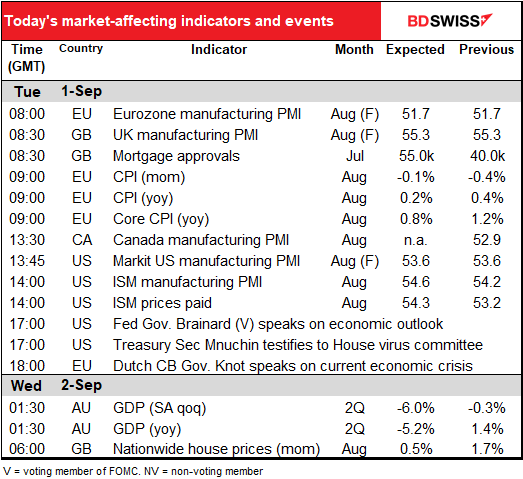 The last day of the month was dominated by…month-end flows, naturally. This happens regularly as clockwork, and nearly as predictably, because investors rebalance their portfolios at the end of the month, often using the FX fixing on the last day to establish the prices. Going into the fixing, GBP, CAD, CHF and EUR gained vs USD and JPY. EUR/JPY and GBP/JPY were notable gainers. The moves retraced somewhat after the fixing as some hedge funds that took positions ahead of time (based on models of which currencies were likely to appreciate) took profits.

It was the fifth consecutive month for the dollar to end weaker.

In his Jackson Hole comments, Fed Chair Powell told us what the Fed intends to do in the future. Yesterday Fed Vice Chair Clarida explained how the rate-setting Federal Open Market Committee (FOMC) intends to accomplish those goals. He said the primary tools for the FOMC are 1) forward guidance, in which the Fed gives the market some idea of how long it intends to keep rates at the current level and what might induce them to change, and 2) quantitative easing (QE), or large-scale purchases of assets. He said that negative interest rates are off the table. Yield curve control (YCC), in which the central bank fixes rates at the long end of the curve as well as the short end, remains an option but would only be implemented “if circumstances changed markedly.” He said the FOMC will discuss “potentially refining guidance and our balance sheet communication.” There has been speculation that along with the quarterly “dot plot,” in which the FOMC members give their forecast for where rates are likely to be in the future, they may begin a similar exercise with regards to the Fed’s asset purchases.

Clarida also confirmed that the Fed would no longer raise rates just because the unemployment rate was getting low. This follows a rethink on the “Phillips Curve,” which posited a relationship between the unemployment rate and the inflation rate. In the past there was evidence that as unemployment got lower, companies had to pay workers more and therefore raised their prices, which caused inflation to accelerate. This was one of the main reasons why central banks raised rates pre-emptively when their economy strengthened, in order to prevent inflation. Now however the evidence is that this doesn’t happen anymore for whatever reason and so there’s no need to raise rates pre-emptively just because the unemployment rate is getting low. 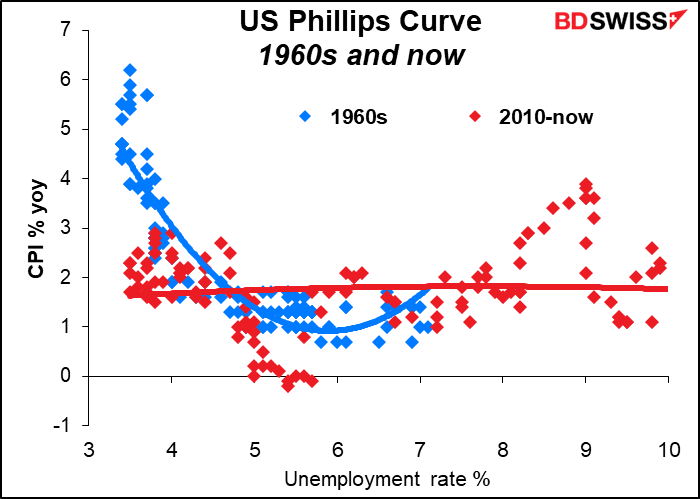 The Reserve Bank of Australia (RBA) kept rates unchanged, as expected, but also increased the size and duration of its Term Funding Facility (TFF). Established as part of the RBA’s emergency package in March, the TFF provides low-cost funds for the banking system to support the supply of credit for households and businesses. If you’re interested in the details of the move you can read about it here. I don’t think it’s directly relevant to the FX market. AUD/USD reacted only modestly to the report; it initially jumped 10 tics, then fell 12, then rose 10, and is now trading slightly lower.

The RBA did however make one notable change to its forward guidance. At the 4 August meeting, it said “This accommodative approach will be maintained as long as it is required.” At today’s meeting, they changed that to “The Board will maintain highly accommodative settings as long as is required and continues to consider how further monetary measures could support the recovery.”  (emphasis added). While they’ve ruled out negative interest rates, there’s more they can do, such as increasing their already-strong quantitative easing measures (see graph). I think the market is likely to pay more attention to this line during the rest of the day and I expect AUD to weaken further. 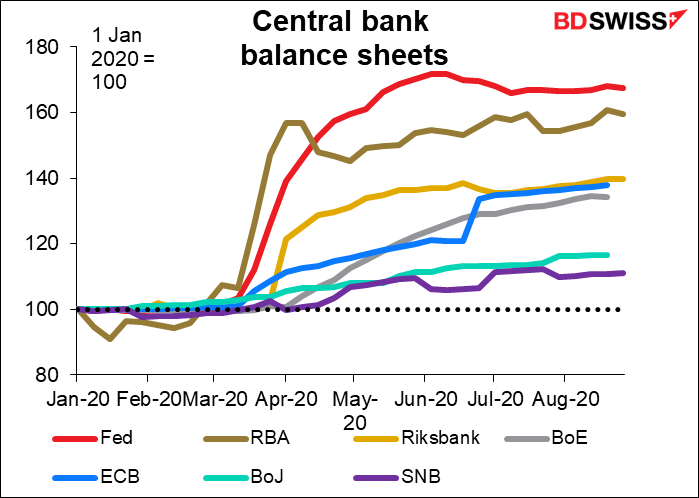 The day starts with the final manufacturing purchasing managers’ indices from the major industrial countries that have preliminary ones, and the one-and-only version for most of the other countries. We hope that these will confirm the story of a continuing recovery even if it’s at a slower pace, but you never know. Overnight, Japan’s manufacturing PMI was revised up to 47.2 from 46.6 – a large upward revision but with the index still in contractionary territory.

Then it’s on to the EU-wide consumer price index (CPI) inflation data. The market expects no change in prices from the previous month, which would bring the yoy growth rate down to nearly nothing. It’s not all energy either as core inflation is expected to slow too. Yesterday’s German CPI showed that Germany is in deflation — prices in Germany fell slightly both on a mom and yoy basis.

As I pointed out yesterday and also in my weekly, but I will point out again today since I get paid by the word, European Central Bank (ECB) Chief Economist Lane recently hinted that the ECB doesn’t think its job is done and that it might still need to loosen policy further. With figures like this, the revisions to the staff forecasts at the 10 Sep ECB meeting may make dismal reading. Already their forecasts are for core inflation to remain below 1% out to 2022 – what was it that Sarah Palin said? “’How’s that hopey, changey stuff working out?” I’d like to ask the ECB (and the Bank of Japan, and the Fed, etc.) how’s that “close to, but below, 2%” stuff working out? 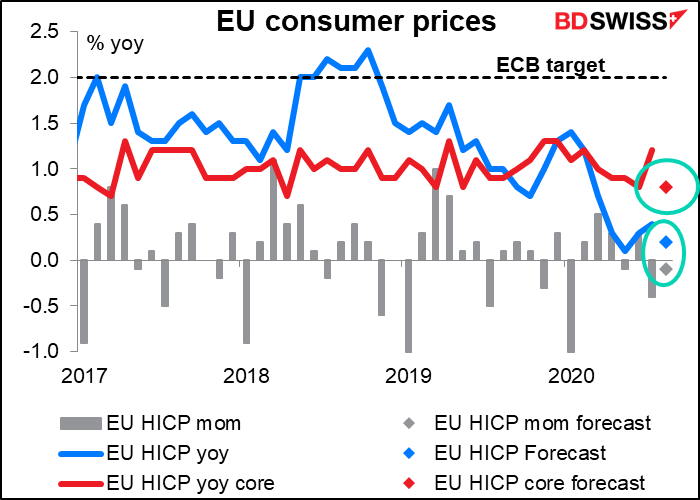 The Institute of Supply Management (ISM) manufacturing purchasing managers’ index (PMI) is forecast to continue rising. It was generally higher than the Markit version for several years and is back to that trend. The difference isn’t great though so I wouldn’t expect much reaction – this would just verify what people are already thinking, which is that the manufacturing side of the US economy is steadily recovering.

The prices paid index is usually another big point of interest with this index as a harbinger of inflation, but given that no one is particularly worried about inflation right now, I don’t think it will attract much attention. 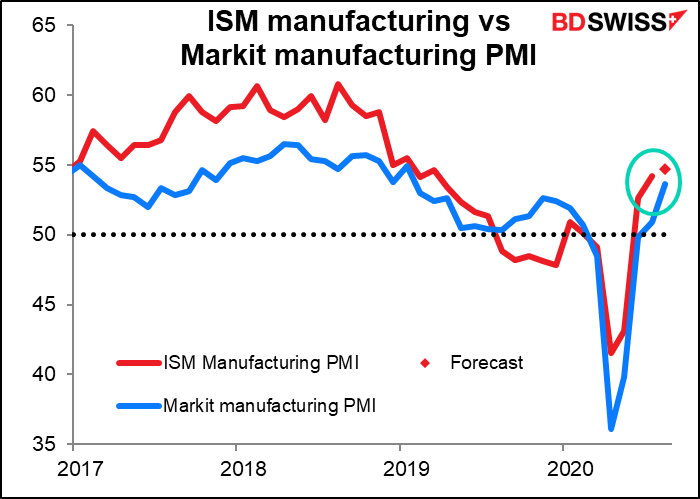 US Treasury Secretary Steven Mnuchin will testify before the House Select Subcommittee on the Coronavirus Crisis. The hearing “will examine the urgent need for additional economic relief for children, workers, and families and the Administration’s implementation of key stimulus programs passed by Congress earlier this year,” the subcommittee said in a statement. This is Mnuchin’s first congressional testimony since negotiations on a new round of federal coronavirus aid collapsed in early August. I’m sure he’ll prevaricate and mendaciate, if that’s indeed a word (which it isn’t, unfortunately) but we may get some hints on if, when, or indeed whether there might be a solution to the political logjam preventing the government from resuming aid to the 27mn or so unemployed persons.

The background, in case you’re not familiar with it:  the House Democrats passed a $3.4tn relief package in May. The Senate Republicans however can’t even agree on a $1.1tn bill, as many of their members think that’s too much money. Laws in the US have to pass both Houses of Congress, so the two sides have to agree on a number or nothing can get passed.

Overnight we get Australia 2Q GDP. This is likely to be the second consecutive quarter of negative growth and therefore the country’s first official recession since 1991. It will also be the largest drop ever recorded in the country, but of course that’s the same everywhere.

The Bloomberg consensus forecast of -6.0% qoq is better than the -6 3/4% decline that the Reserve Bank of Australia expected in its June Statement on Monetary Policy, although the difference at this point is hardly meaningful. 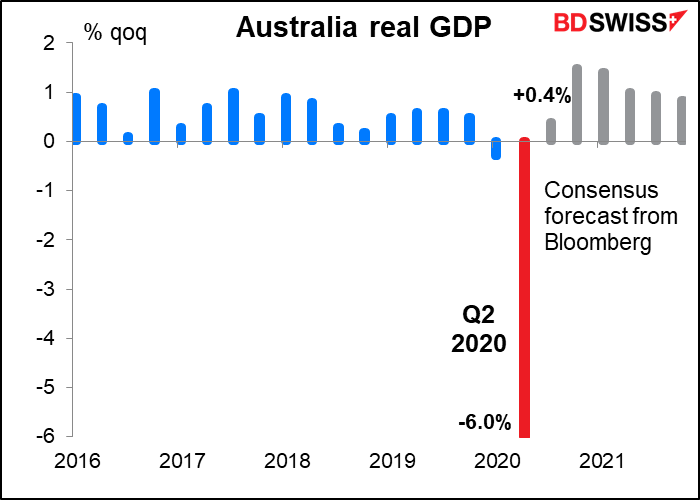 Although this would be the worst-ever result for Australia, it’s actually pretty good in international terms. It compares to -11.8% qoq in Canada, another commodity currency, -10.1% qoq in Germany, another export-led economy, and of course  almost everywhere did better than -20.7% in the UK. Australia has benefited from relatively mild restrictions during the April lockdown and a strong contribution from net exports, which helped to offset the weakness in domestic demand. The fact that the lockdown was harsher in Q3 than in many other countries may help explain why the consensus forecast for growth in Q3 is so low. 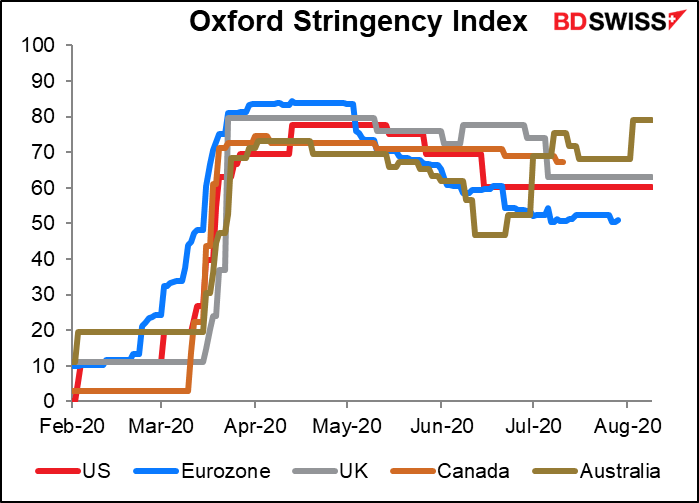 Finally, early morning Wednesday brings UK house prices by the Nationwide Building Society. They’re expected to be up, which seems to be the general pattern internationally – with more companies allowing people to work from home, more people are realizing that they don’t need to live in a tiny flat in a crowded city but rather for the same money they can get double the size, a garden, etc. Plus a home office, which they’ll need if they’re going to work from home. 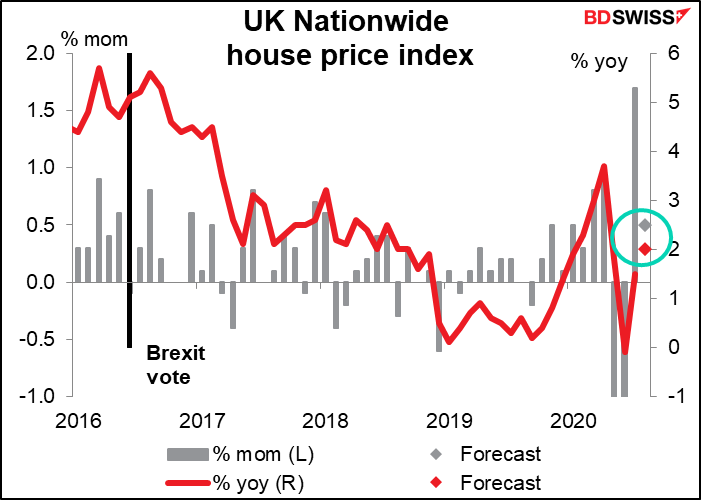 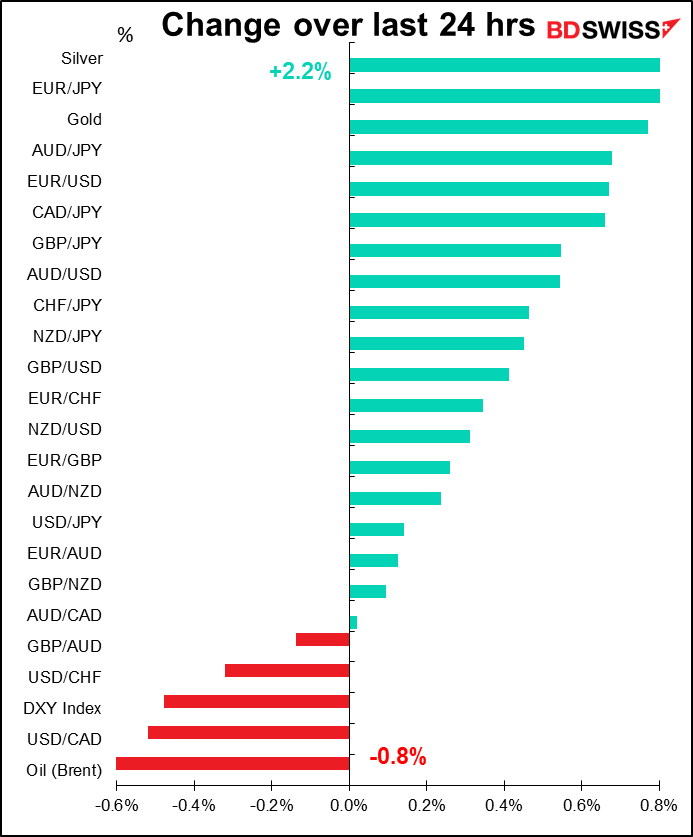