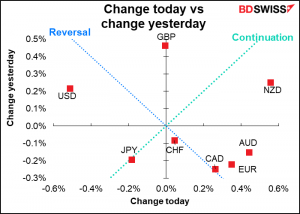 As central bank rhetoric on inflation gradually changes from “transitory” to “persistent,” investors have been bringing forward their expected dates for when central banks will start tightening and how high interest rates are likely to go. Yesterday though there was an interesting reaction in bond markets: longer-dated yields fell in some markets, causing yield curves to flatten. 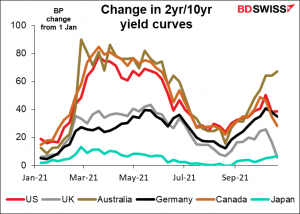 This was particularly noticeable in the UK and UK markets. Shorter-dated yields have risen on expectations that the central banks would remove accommodation (stop their quantitative easing bond-buying programs and gradually raise interest rates). 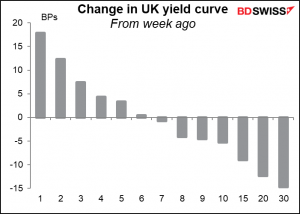 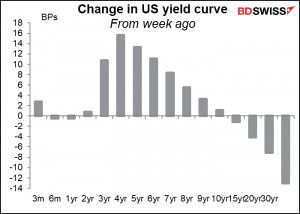 The market has dramatically repriced the expected path of UK rates over the last week. Following Bank of England Gov. Bailey’s comments over the weekend, the market now sees an 86% chance of a rate hike at the Nov. 4th Monetary Policy Committee (MPC) meeting and four hikes total over the next year, vs only three just a week ago. 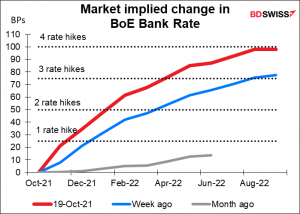 The big question is though, why have longer-dated yields been falling? It could be that the market assumes the early tightening will get inflation under control and therefore investors need less of a risk premium to get them to buy longer-dated bonds. Or it could be that the market believes this early tightening will be a policy mistake – that the weak economy won’t be able to withstand higher rates — and the central bank will have to reverse it sometime down the road.

In the case of the UK, I think the market might be getting a bit ahead of itself. Looking at the nine members of the MPC, three are “doves” who want to keep rates stable and two are “hawks” who’ve already been agitating for higher rates. Looking at the four in the middle, it appears to me that two – Gov. Bailey and the new Chief Economist, Huw Pill – are likely to shift over into the “hawk” column as well, but two others – Deputy Gov. Jon Cunliffe and Deputy Gov. Ben Broadbent – will probably remain neutral. Thus I’d expect a 4-5 vote on tightening rates in November (four in favor, five against). See below for more discussion on UK inflation. 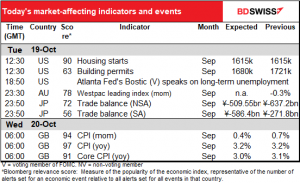 Not much going on during the European day.

The US day starts with housing starts and building permits. Much to my astonishment, the forecast for starts is exactly the same as the previous month’s figure. This is the median of 41 estimates, so I guess most people just thought that it would be around the same as last month. While the post-pandemic surge seems to have calmed down somewhat, it looks like the housing industry is still going strong. That increases the likelihood that housing will be able to weather the Fed’s gradual exit from the mortgage-backed securities (MBS) market as it tapers down its aid to the economy. . USD+ 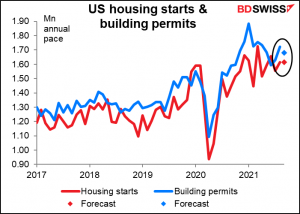 Overnight we get Japan’s trade data. The trade deficit is expected to widen out further. 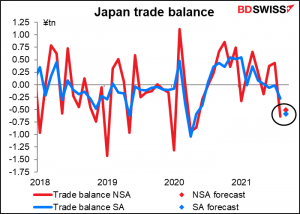 If we convert the forecasts into yen amounts, we can see what’s happening: Japan’s exports have come down over the last few months while imports are rising. 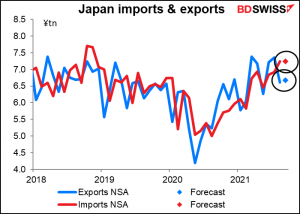 Part of this is likely to be higher energy costs, although much of the country’s energy imports are done on long-term contracts and so are not that vulnerable to movements in the spot price. Japan is the world’s largest importer of liquified natural gas (LNG), the price of which has gone through the roof and indeed launched into orbit recently. But some 80% of Japan’s LNG imports are under contract tied to the price of oil, which has only gone to the attic and is not yet through the roof. 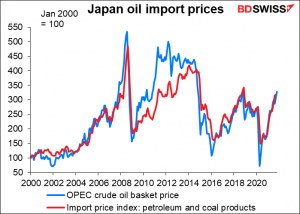 The fall in exports is more worrisome. That probably has something to do with the shutdowns across the auto industry due to a shortage of parts as the virus curtails component production in SE Asia. Companies can’t export cars that they can’t build. A widening trade deficit on top of a central bank that can’t even “think about thinking about” exiting from its quantitative easing program is a recipe for a weaker currency, IMHO.

The stabilization of inflation is not likely to reassure the Bank of England, which forecast last month that inflation may rise “to slightly above 4% in 2021 Q4, owing largely to developments in energy and goods prices.” On the contrary, this month may well be just the “calm before the spike,” as the yoy rate of growth is held down by base effects. The “Eat Out to Help Out” scheme finished at the end of August 2020 – that had lowered prices in 2020 and therefore been boosting the rate of yoy inflation in 2021, but it falls out of the calculation this month. But higher energy prices are going to start feeding through into the CPI in coming months. 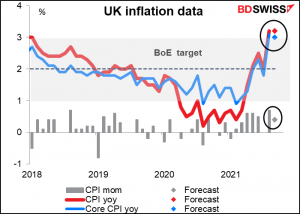 Moreover, the Bank is getting worried not just about the level of inflation but also the persistence. BoE Gov. Bailey recently said that the Bank had to work to prevent higher inflation from “becoming permanently embedded because that would obviously be very damaging.” UK inflation expectations are now the highest they’ve been in at least a decade. 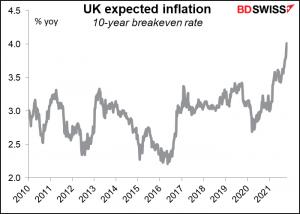 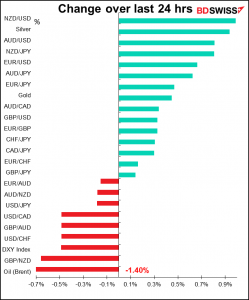