You are at:Home»MARKET PREVIEW»GBP, NZD Higher on Expected Hike In Rates; US Industrial Production 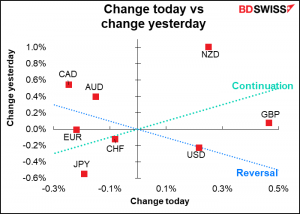 I’ve never seen such a clear representation of that fact as today’s Britain and GBP. The shelves are empty, the petrol stations are empty, the country is threatening a trade war with its biggest trading partner, and the trade deficit is widening, and yet the pound is rising.

GBP was the biggest gainer overnight after Bank of England Gov. Bailey Sunday stated flatly that the British central bank is gearing up to raise interest rates“Monetary policy cannot solve supply-side problems – but it will have to act and must do so if we see a risk, particularly to medium-term inflation and to medium-term inflation expectations,” Bailey said during an online panel discussion organized by the Group of 30 consultative group. “And that’s why we at the Bank of England have signalled, and this is another such signal, that we will have to act,” he said. “But of course that action comes in our monetary policy meetings.”

The next meeting is Nov. 4th. The market currently sees only a 28% chance of a rate hike then. The first hike is priced in for the December 16th meeting. 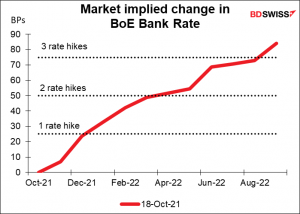 NZD also benefited from expectations of higher interest rates after Q3 inflation far exceeded market expectations (+2.2% qoq vs +1.5% expected). This was higher than the highest of the 15 estimates on Bloomberg (+1.8%). The qoq rate rise was the highest since 2.3% in Q4 2010. 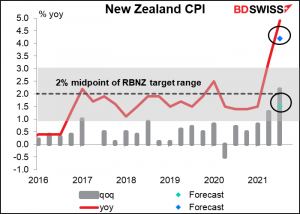 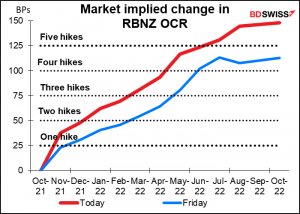 With inflation fears rising, commodity prices rose further too. The Bloomberg spot commodity index rose further into record territory. Oil was up 2.0% (WTI) or 1.4% (Brent), depending on which you look at. 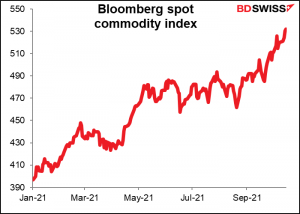 Which makes me wonder: why was CAD the worst-performing currency when oil was up? It apparently weakened in New York trading (USD/CAD moved higher) and is continuing that trend today. I think this doesn’t make much sense and would expect a reversal at some point today.

The only thing I can think of is that maybe the market doesn’t expect the Bank of Canada to start tightening very soon, in contrast to the other central banks. But that could change on Wednesday when the Canadian CPI comes out. 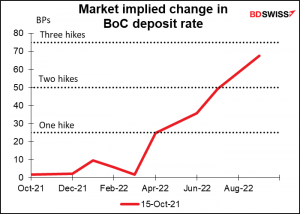 In Germany, the Social Democratic Party (SPD), the Greens, and the Free Democratic Party (FDP) Friday on some preliminary policies that will form the basis for negotiations on forming a coalition. These preliminary policies include maintaining the constitutional debt brake, a pledge not to raise taxes or impose new ones, and an increase in the minimum wage to €12/hour. It looks like big concessions from the SPD and Greens on fiscal policy to the FDP’s more conservative position. The market is likely to take this well and it should be positive for EUR (unless the market is focusing on growth, which might benefit more from a looser fiscal policy). The SPD agreed Friday to enter into talks, the Greens agreed over the weekend, and the FDP is expected to agree today.

Specs reduced their short currency position slightly as cuts to short GBP, CHF, EUR, and AUD just barely offset an increase in short CAD, MXN, and especially JPY. But the overall change was minute, just 0.9% of their total position. And the increase in the long DXY position suggests that they aren’t necessarily turning less bullish USD. 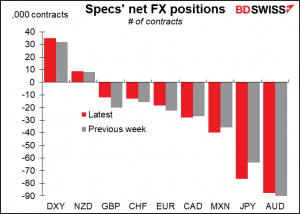 Hedge funds sold into AUD and CAD strength, the only two G10 currencies to appreciate vs USD over the reporting week. This continues the recent trend of hedge fund selling of these two currencies. 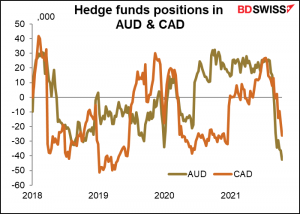 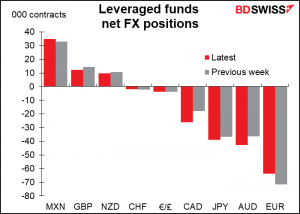 Retail traders on the other hand trimmed their short AUD positions and added to their long CAD positions – trend-following. These were the biggest changes that they made in terms of the number of contracts. 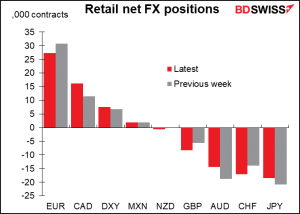 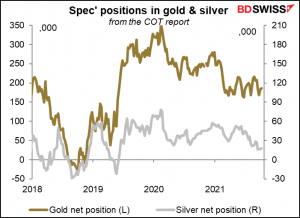 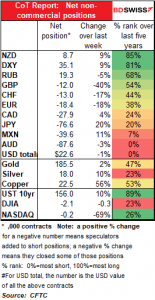 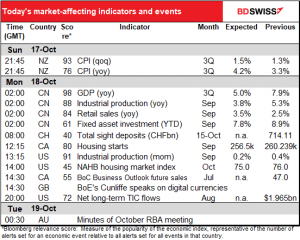 As usual, we start the week with the Swiss sight deposits. Recently they never do anything notable. So why do I keep watching them every week? Because of the experience of some reporter whose name I forget and can’t find on google. This guy covered the appalling Alabama Gov. George Wallace for 10 years, appearing at every rally or speech the-then hateful segregationist (“segregation now, segregation tomorrow, segregation forever”) made, which must have been a very unpleasant beat indeed. He took one day off and that happened to be the day that Wallace was shot. So I look at the sight deposits every week. Spoiler alert: the Swiss National Bank didn’t shoot anyone last week despite the steady decline in EUR/CHF. On the contrary, deposits have fallen slightly for six consecutive weeks. Will today make seven? 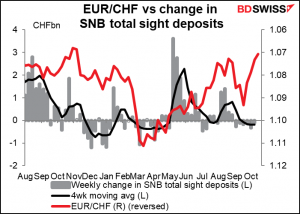 Canadian housing starts are expected to continue to decline. This would be the fourth consecutive month of decline. Canada too is suffering from a labor shortage – permits are higher than this, but apparently companies have been having problems finding people to build the houses. 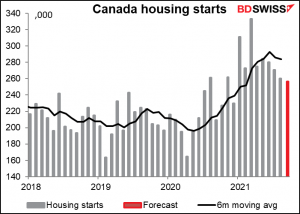 US industrial production is one of the important indicators for the US economy but not so much for the FX market, I’ve found. Today’s figure may provide some insights into supply chain disruptions, particularly in the auto industry, where a number of factories have had to shut down due to the lack of semiconductor chips (thanks to an explosion of COVID-19 in Malaysia, by the way). It will also be interesting to see how utilities and the oil & gas industries are reacting to the surge in energy prices. Given the global supply chain problems, I think a positive number would be taken as a sign of the resilience of the US economy and should be positive for the dollar. 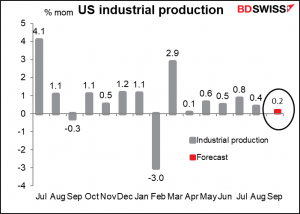 Overnight the Reserve Bank of Australia (RBA) will release the minutes from its October meeting. The distinguishing point of the RBA is how dovish it is when compared to other central banks around the world. Many of them are gradually expressing more and more concern about inflation. The key point in the minutes then will be to gain more insight into why they’re so concerned about the economy and unconcerned about inflation, and also when they might be thinking of raising the cash rate. 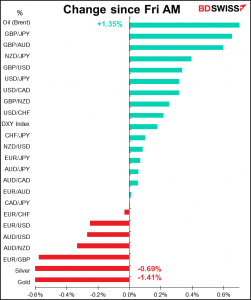