You are at:Home»MARKET PREVIEW»JPY up, AUD down as mood shifts to global tightening; ECB meeting 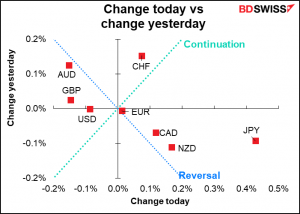 It’s said among us pundits that “he who lives by the crystal ball has to learn to eat glass.” I’ve eaten so much glass in my career, one might think it was a necessary part of a vegetarian diet, perhaps to replace those vitamins and minerals that one misses from not eating crow.

So will you let me take a victory lap and point out that the Bank of Canada did just as I expected and CAD rallied, as I thought it was likely to? The Bank not only ended its quantitative easing (QE) program, but also brought forward the time when it expects to start raising rates, from “the second half of 2022” to “the middle quarters of 2022.”

I especially noted their comments on inflation:
The recent increase in CPI inflation was anticipated in July, but the main forces pushing up prices – higher energy prices and pandemic-related supply bottlenecks – now appear to be stronger and more persistent than expected… The Bank is closely watching inflation expectations and labour costs to ensure that the temporary forces pushing up prices do not become embedded in ongoing inflation.

There it is: instead of “transitory,” they used “persistent.”

Naturally, the market also brought forward the time when the BoC is expected to start hiking rates. 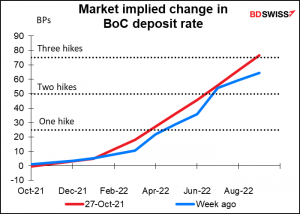 The result was positive for CAD, as one might imagine, although not as positive as one might have imagined. That’s probably because of the sell-off in oil that happened after the announcement. Oil is the “black hole” of Canadian economic fundamentals: it exerts an inescapable pull on CAD no matter what else happens. 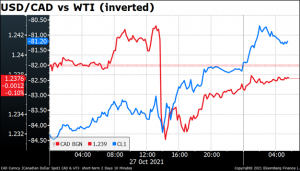 As for the Bank of Japan, where it’s deflation that’s persistent, not inflation, they were exactly as expected: no change in policy and small tweaks to their forecasts. They cut their estimate for growth in this fiscal year (April to March) by 0.4 percentage point, reflecting setbacks from the virus and supply chain problems, and downgraded its view on exports and production. While they did upgrade their forecast for growth in FY22, it was by only 0.2 ppt i.e. less than the downgrade for FY21. In other words, a slightly gloomier economic outlook. (FY23 forecast was unchanged.)

They also cut their forecast for inflation this FY to 0% from 0.6%, cementing the country’s status as the global inflation outlier. (FY22 and FY23 inflation forecasts were unchanged.)

So why was JPY the FX market leader? Not because of the BoJ. The bid decline in USD/JPY came about an hour before the BoJ announced the results of its meeting, which in any case were hardly startling. No, the plunge in USD/JPY corresponded with the plunge in Australian 3-year bond futures after the Reserve Bank of Australia chose not to defend its target for the benchmark 3-year yield. Investors are anticipating that the move presages some adjustment of the RBA’s policy guidance at its meeting next Tuesday. 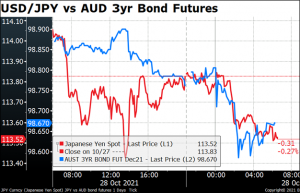 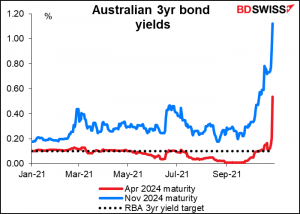 As central banks gradually transition from “transitory” to “persistent,” expectations of monetary tightening are increasing. Short rates are rising in anticipation of monetary tightening, while long rates are declining in expectations that inflation won’t be as high as previously expected over the longer term. As a result, yield curves are flattening around the world. (News of a cut in the supply of UK gilts next year also helped.) 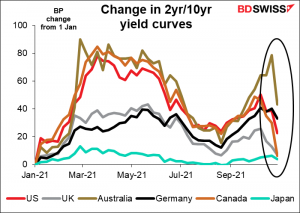 The interesting question then is, why didn’t expectations of higher rates help to boost AUD? The answer there must lie in the flatter yield curves, which presage expectations of slower growth globally. That’s negative for the commodity currencies. 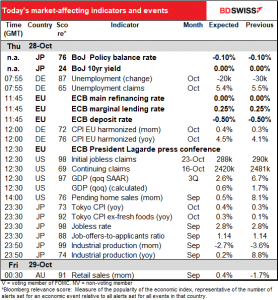 As for the indicators, the day begins with German unemployment. The market looks for a modest fall in the number of unemployed and a drop in the unemployment rate. Ordinarily, that would probably be beneficial for the euro, but today people will probably want to wait until they’ve heard what European Central Bank (ECB) President Lagarde has to say. 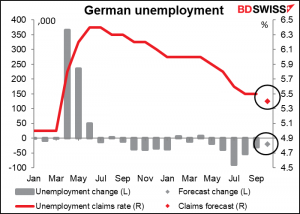 I don’t expect any change in policy at today’s ECB meeting, as I discussed in painful detail in my illustrious Weekly Outlook. The next big decision comes in December, when they’ll have to decide what to do with their EUR 1.8tn Pandemic Emergency Purchase Program (PEPP) when it hits its first “sell-by” date at end-March. President Lagarde still needs to build some consensus among the Governing Council about whether to end or extend the PEPP. So at this meeting, we’ll be looking for just some change in tone or nuance, for example any changes to the assessment of the risks to growth and inflation.

Lagarde may also challenge the market pricing of the first 10 bps hike in interest rates (aka “lift-off”) before the end of 2022, contrary to what ECB Chief Economist Lane and others have suggested. The ECB in July revised its strategy review and instituted what’s being called a “triple lock” requirement before hiking rates, namely it said it would keep rates at present levels or lower

“well ahead” is thought to be 15 months or so before the end of the forecast horizon, which next month will be extended to 2024. In other words they’d have to see inflation hitting 2% or so in late 2023. On their last forecasts they have it at 1.5% then. Will it be revised up to 2.0% in December? It could be if people think the current high level of energy prices is going to last, but it seems unlikely to me, especially when considering underlying (i.e., ex-energy) inflation too. So there’s quite a high barrier for any action on rates. A vigorous explanation by Lagarde of why rates aren’t likely to rise in the next few years could be negative for the euro against the background of other central banks shifting to a more hawkish posture.

Speaking of inflation, the German harmonized index of consumer prices (HICP) is expected to rise at a faster mom pace but for the yoy rate of change to decelerate at both the headline and core levels. Normally the inflation data would be a big deal but coming as it does in between the ECB statement and press conference, the data are not likely to have much impact unless they’re very very much outside of the range of forecasts. 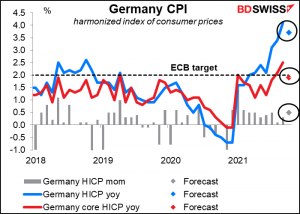 At the same time President Lagarde gets up to speak, the US will announce the dreaded weekly jobless claims. Initial claims are forecast to be down a measly 2k, i.e. effectively unchanged. This follows last week’s -6k decline, which is hardly any better. Are claims stabilizing again, as they did in June and July? Perhaps. 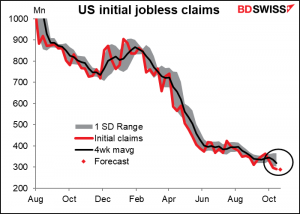 Continuing claims on the other hand are better established on a downward trajectory. They’re expected to decline by 61k, which would be less than the average -85k that they’ve declined each week on average over the previous month. 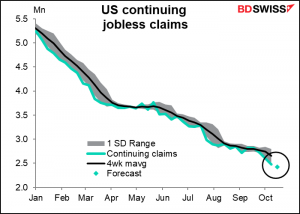 Next up is a biggie: US Q3 GDP. The figure is particularly important ahead of next week’s meeting of the rate-setting Federal Open Market Committee (FOMC) as it will set the baseline for the Committee’s discussion on the economic outlook. It’s expected that activity has slowed considerably due to weak consumer spending and supply chain disruptions (EG, you can’t sell cars that you can’t build). 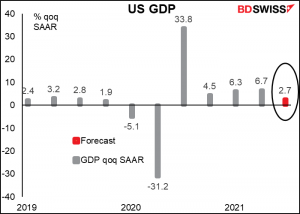 Having said that, US growth is expected to pick up in Q4. 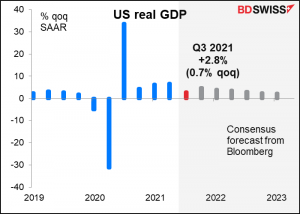 Growth expectations have been coming down steadily for some time, so I think a downside surprise would probably be less of a shock to the market than an upside surprise. A significantly better-than-expected figure could mean that the Fed would decide to start tapering down its bond purchases from November, not just make an announcement. That could be positive for the dollar. On the other hand, they’re unlikely to delay tapering unless the figure is an utter disaster.
(I have no idea why on this data series, the consensus forecast is +3.4% qoq SAAR whereas on the other, more up-to-date page it’s +2.8%. The latter is the correct number.) 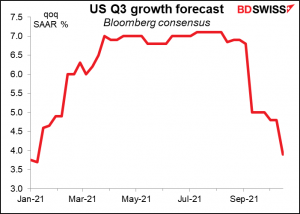 So that’s it for the US indicators. I’m not going to discuss pending home sales. I mean, come on. Enough with the home sales already. We have existing home sales, new home sales, and now you want to discuss sales of homes that haven’t even gone through yet? Donnez-moi une break, si vous plait.

So it’s on to the usual end-of-month data dump from Japan, including Tokyo CPI, employment data, industrial production, and retail sales.

The Tokyo consumer price index (CPI) is the most important of the lot for the FX market. Since more than 10% of the country lives in Tokyo, it’s a pretty good proxy for national inflation and comes out two weeks earlier. Rising energy prices are likely to push the CPI higher, but the “core-core” CPI measure (not shown), which excludes energy, is expected to be unchanged from a year ago. (The standard “core” inflation in Japan only excludes fresh food, unlike in the West, where it usually excludes energy too.) In any case it’ll be a long long time before inflation gets to the level where the Bank of Japan can start “thinking about thinking about” changing policy, so this probably won’t have much impact on the yen. 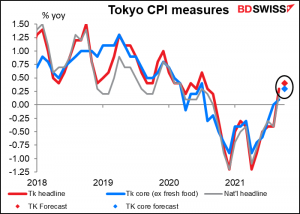 The job-offers-to-applicants ratio and the unemployment rate are both expected to be unchanged, so we needn’t spend much time discussing them. Job market conditions in Japan, while not bad, have remained pretty much flat this year. The unemployment rate was 2.9% in January and is expected to remain at 2.8% in October for the third month in a row. The job-offers-to-applicants ratio was 1.10 in January and is expected to be 1.14. So this is no reason to sell the currency but no reason to buy it, either. 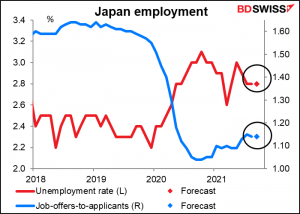 Industrial production is likely to show a near-disastrous decline for the third month in a row as auto production sputters due to a lack of parts. 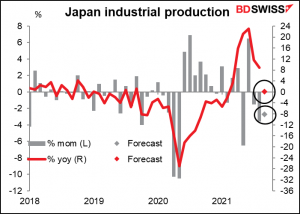 Industrial production globally seems to be turning over, with Germany and Japan in the lead. 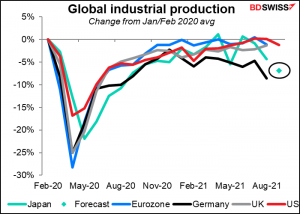 Finally, retail sales are expected to continue their erratic pattern. Economic activity has gradually been returning to normal since the state of emergency was lifted from Oct. 1st, so the September retail sales figure is not representative of the underlying state of demand. 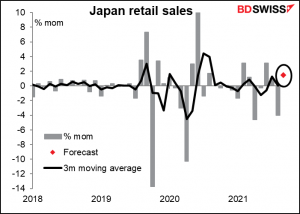 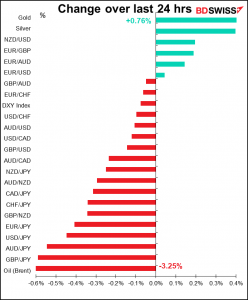