You are at:Home»MARKET PREVIEW»Lagarde Fails To Persuade The Markets; EU CPI, GDP, US PCE deflators 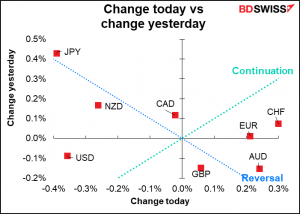 Neither the Bank of Japan nor the European Central Bank (ECB) meetings made major waves in the FX market. The ECB was moderately dovish, as I had expected. ECB President Lagarde did indeed push back against market expectations that rate hikes would start in 2022 or soon thereafter, which she said would be inconsistent with the ECB’s forecast and its forward guidance. Nonetheless her comments don’t seem to have depressed the euro. That’s surprising to me, because her admission that higher inflation is likely to last longer than expected (they dropped the phrase that it is “largely temporary” from their statement) coupled with the Governing Council’s commitment to keeping an easy monetary policy means lower real interest rates in the eurozone, which should in theory weaken the currency.

On the other hand, her protest didn’t seem to convince anyone – the market is still forecasting a 10 bps hike in rates by next July, long before the ECB itself is saying it’s likely to start hiking rates. 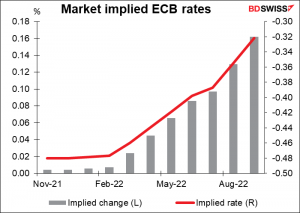 Perhaps the reason was that she also hinted that the Pandemic Emergency Purchase Program (PEPP) is likely to end on schedule in March 2022. German yields rose across the curve as a result, which may have supported the euro. 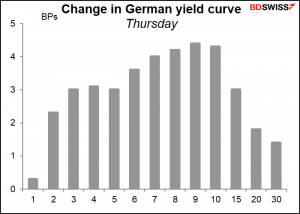 Or maybe that was just a reaction to yesterday’s higher-than-expected German and Spanish inflation, the highest since the current statistical series started in 1997. This may have caused people to doubt the ECB’s view and question whether they might have to change their tune sometime down the line, as several other central banks have done (see below). 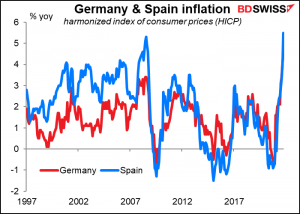 Although German yields rose, Swiss yields rose even more, at least in the short end of the curve. 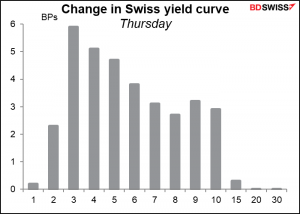 The result was some improvement in Swiss yields relative to German yields and therefore a stronger CHF. 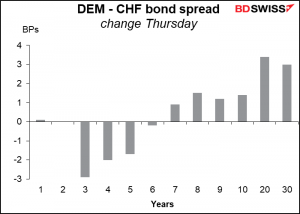 The strength in CHF contrasted with the weakness in JPY, the other so-called “safe haven” currency. In his press conference yesterday Bank of Japan Gov. Kuroda didn’t push back against the recent weakening of the yen, which in effect gave traders a green light to keep selling the currency. Given the preternaturally low level of inflation in Japan and the absurdly low chance of any change in policy by the BoJ, I would expect the yen to return to being the “funding currency of choice” for global carry trades and for JPY to weaken further as a result. At least I hope so as my daughter has another year of university there. 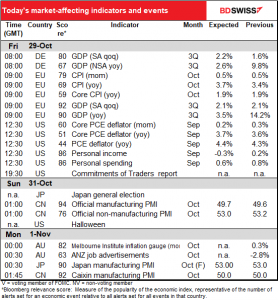 There’s a lot on the schedule today.

German GDP (as well as French and Spanish) are the prelude to EU-wide GDP this morning. (Italy comes out too at the same time as the EU-wide figure. They’re both expected to be fairly robust at 2.2% qoq and 2.1% qoq, respectively. 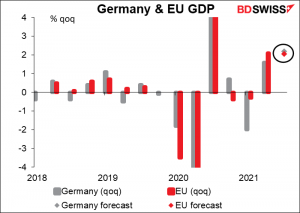 The problem is, for the Eurozone at least, that’s expected to be the peak for now. Growth is forecast to sputter along after that. That’s ominous for EUR/USD, as the relative growth rate between the US and EUR is a major determinant of the currency pair. 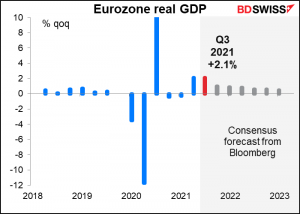 Meanwhile, the EU consumer price index (CPI) is forecast to rise further, although the core index (excluding energy) is forecast to remain the same. ECB President Lagarde yesterday said that the Governing Council had discussed “inflation, inflation, inflation,” but didn’t change its overall view. They still forecast that inflation will “rise further this year,” but fall back next year as the influence of the factors that are currently causing it to rise – energy prices, resurgent demand outpacing supply, and base effects related to the German VAT cut – diminish. 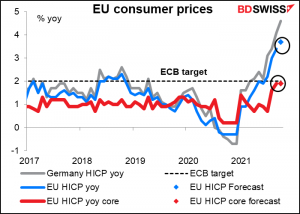 Economists tend to agree with President Lagarde — the consensus forecast for Eurozone inflation is that it does indeed fall back to below the ECB’s 2% target. 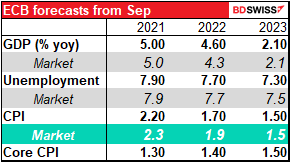 However the market isn’t so convinced. Inflation swaps suggest that although it may dip below 2% next year, it’s likely to stay at around that level for the next several years afterward. This difference of view is what’s fuelling the market’s more aggressive view on rates relative to the ECB’s dovish outlook. 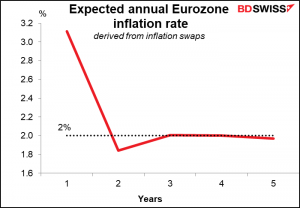 US inflation meanwhile is expected to rise further. The personal consumption expenditure (PCE) deflators, the Fed’s preferred inflation gauges, are forecast to rise at both the headline and core levels. Moreover recent data from auto auction company Manheim indicates that used car prices, the main villain in rising inflation so far, are still rising. We may get even faster inflation readings in the future, which could encourage the Fed to accelerate its tapering. USD+ 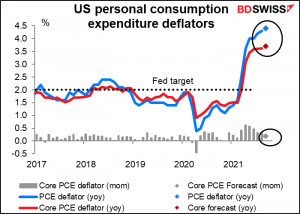 US personal income & spending on the other hand is calming down – the month-on-month changes are returning to the pre-pandemic scale, before the government started sending out $1,400 checks to people (including me!). 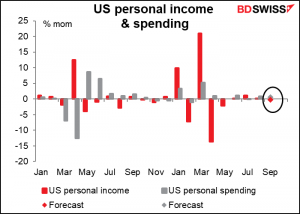 That would still leave income 9.1% above the pre-pandemic level and spending 8.4%. How the US economy will deal with the inevitable slowdown in spending as incomes come back down to earth is one of the major questions the US economy faces. Over the weekend, Japan holds its General Election. The result is hardly in doubt – the Liberal Democratic Party (LDP), which is neither liberal nor democratic, is likely to remain in power with PM Kishida at its head. The main question is whether the LDP can get a majority by itself or whether it will need to go into a coalition with its long-standing coalition partner, the Komeito. Some newspapers are saying it’s a close call as the opposition parties are coordinating to avoid competing against each other in single-seat constituencies and many LDP Lower House members have not established a solid footing in their constituencies – 46% of all LDP Lower House Diet members have won three elections or less.

In any case, the differences among the parties are relatively minor when compared with differences among political parties in other countries. There is no Japanese Angela Merkel advocating admitting 1mn refugees to solve the country’s demographic problem, for example. All of the parties favor economic stimulus, the only difference is in the amount that they want to give away and their preferred way of distributing the largess. The leading opposition party, the Constitutional Democratic Party (CDC), is more tilted toward income redistribution (higher taxes on high earners) while the LDP is trying to foster growth by promoting decentralization, but the differences are of strategy, not aim.

In general, an LDP majority victory tends to be good for the stock market and therefore negative for the yen, while a coalition victory would tend to be less so. However over the medium term the yen tends to be buffeted about more by external factors than by domestic Japanese factors, so I wouldn’t lose too much sleep over this election.