You are at:Home»MARKET PREVIEW»FX Market Becalmed; Bank of Canada, Bank of Japan Meetings 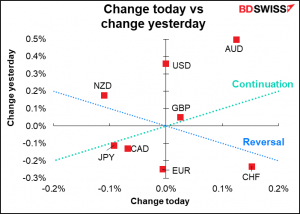 Do I get to skip my comment today? My usual rule-of-thumb is not to talk about any currency with less than a 0.1% move, because that’s just Brownian motion and has no meaning. By that rule, I should just cut it short and go right into today’s data. But since I get paid by the word, that’s unthinkable. (That’s just a joke – a better idea in my case would be to penalize me for every word over a certain number.)

Nonetheless, the absence of movement is noteworthy, given how good yesterday’s data was. In particular, the Conference Board consumer confidence index rose to 113.8 from 109.3 instead of falling to 108.0 as expected. Furthermore, the “jobs DI” (jobs plentiful index – jobs hard to get index), which had started to fall from its peak, rose to 45.0, its second-highest level ever (record was 46.2 in July 2000; data back to 1967). 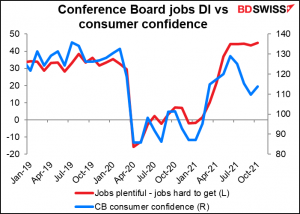 Meanwhile the Richmond Fed Manufacturing index rose to 12 from -3 vs expectations of only 5, and new home sales for September also beat expectations at 800k (756k expected, 740 previous). Nonetheless Fed funds futures were little changed as was the dollar, as you can see.

West Texas Intermediate (WTI), the US benchmark crude oil, was a bit higher (+0.2%) even though the American Petroleum Institute (API) reported an increase in crude oil inventories of 2.3mn barrels in the latest week, similar to the 2.0mn that traders expect from this afternoon’s US Dept of Energy figures. This was the fifth consecutive week of higher inventories. 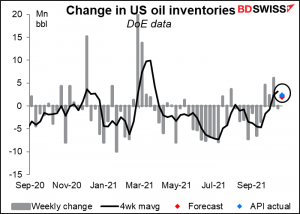 Apparently the market is more concerned about the inventories at Cushing, Oklahoma, the major distribution point for US-produced oil, than overall inventories (which include imported oil). Cushing can store some 76mn barrels of oil. The API reported a draw of 3.734mn barrels in Cushing, which would reduce Cushing inventories to 27.5mn. According to Bloomberg, the tanks need around 20mn bbl to operate normally. Why are Cushing inventories falling so much? One reason is the surge in the price of natural gas. The light, sweet, crude (light = low viscosity; sweet = low sulfur content) from Cushing has less sulfur than some other types of oil that must be processed through hydrocrackers. Hydrocrackers rely on hydrogen, which is usually generated from natural gas, which is soaring in price. So buyers from around the world are flocking to buy oil from the US.

At the same time, US production hasn’t responded to the higher demand or higher prices. It was 11mn barrels a day in July 2020 and it’s averaged 11.3mn barrels a day over the last month. 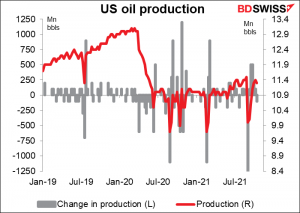 The number of oil and gas rigs in operation is still well below its pre-pandemic levels. US producers just haven’t responded to the market signals. 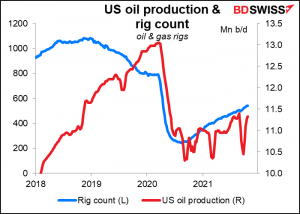 As a result, demand for oil now has surged and traders are paying a sharp premium for oil in the next month compared to oil a year from now (aka backwardation). This is setting up a bullish scenario for crude oil – and for CAD. 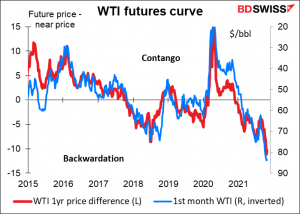 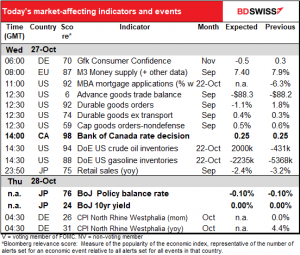 The European Central Bank (ECB) releases its money supply and bank lending data. Mortgage lending has been increasing, but corporate lending is in the doldrums while new household borrowing aside from mortgages is virtually nonextant. With the effect of last year’s pandemic now fading from the picture, we’re starting to see a more accurate picture of how credit markets are performing. The ECB would probably like to see more borrowing by households and companies and may be loathe to tighten financial conditions materially before that happens. 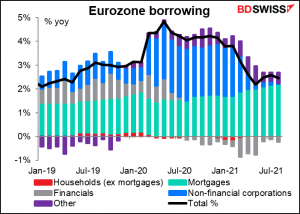 UK Chancellor of the Exchquer Sunak announces the Autumn Budget Statement today. As usual it’s been well leaked in the British press and I’m not sure it will have much impact on the pound. Nonetheless it could be important for the FX market. Traders usually focus on monetary policy and nowadays the tapering down of monetary policy, but fiscal taper is important too. The Debt Management Office debt remit (how much they will issue in the next fiscal year) is likely to be revised down as they’ve overfunded their spending this year, because a) the economy has performed better than expected (higher-than-expected revenues), and b) unemployment is lower than expected (lower-than-expected spending). Lower issuance = less upward pressure on rates = could be negative for GBP.

The US advance trade figures (trade in goods only) have a laughably small Bloomberg relevance index of 6, but I can’t get out of the habit of thinking that trade data are important for FX (spoiler alert: they’re not particularly any more, it’s all capital flows that matter). A widening deficit would be a good sign, in my view, because it would mean more goods coming in, i.e. the port bottleneck is dissolving a bit. 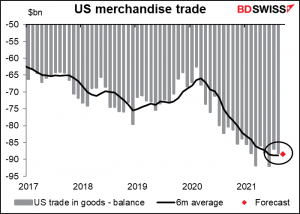 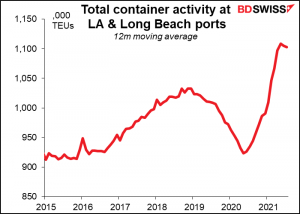 US durable goods will no doubt attract a lot more attention. The headline figure is likely to be depressed by a lack of aircraft orders. 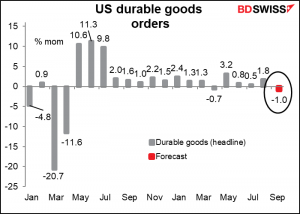 Non-defense capital goods orders are expected to be at a record level almost 19% higher than their pre-pandemic level. Are companies trying to surmount the post-pandemic bottlenecks? If so we might see a sudden rush of capacity in a year or two that could send the inflation rate plunging. 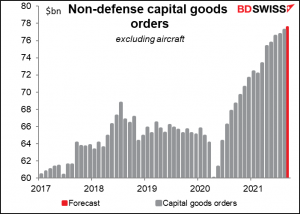 Then we get to the big excitement of the day, the Bank of Canada (BoC) rate decision. Really, I wrote far more about this in my Weekly Outlook than you can imagine – if you want to read an in-depth discussion of the role of monetary policy in determining USD/CAD, together with a few nifty graphs on the subject, please see my comment.

But because I know you won’t – you never do, do you? – no one ever clicks on the links in my comments – I’ll repeat the main points here. (This is an example of zero marginal cost economics: if this article were written on paper I’d be cautious about repeating things, but since there’s no cost to a web page I can repeat things ad infinitum at no additional cost.)

The BoC has been far and away the most aggressive central bank when it comes to expanding its balance sheet. At its peak the Bank had expanded its balance sheet to 4.8x as big as it was before the pandemic began. That dwarfed all the other expansions. 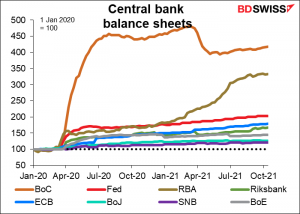 The BoC has already tapered down its bond purchases considerably, from the original CAD 5bn a week to CAD 2bn a week. But its balance sheet is still growing. The market (and I) think it’s likely that they will taper down or even end the QE program at today’s meeting. Consumer prices rose more than expected in October. The headline figure is way outside the Bank’s target range. Even the core measures, while still within the target range, are clearly headed upward. And the recent Bank of Canada Business Outlook Survey showed significant upward pressure on prices in the country, while inflation expectations are rising. 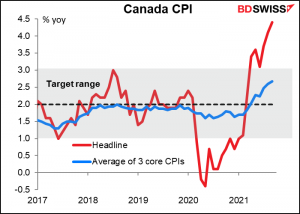 The impact on CAD depends on a) whether they end the QE program completely, and B) any changes in their forward guidance. At the last meeting they said, “We remain committed to holding the policy interest rate at the effective lower bound until economic slack is absorbed so that the 2 percent inflation target is sustainably achieved. In the Bank’s July projection, this happens in the second half of 2022.” If they move that forecast up any – a real possibility given how high inflation currently is – then CAD could appreciate further after the meeting.

Then overnight we get the Bank of Japan (BoJ) policy decision. Compliance regulations forbid me from saying that anything is certain (“we believe that the sun is likely to rise in the east tomorrow, although past performance is no guarantee of future performance”) but let’s just say the odds of the BoJ making any changes in its policy at this meeting – or indeed any meeting in the foreseeable future – are pretty slim. At least, that’s the judgment of the market. In case you missed what I said in my Weekly, I’ll just point out that the Bloomberg relevance score for the BoJ meeting is a mere 76! (That’s what % of the people who have alarms set for Japanese economic indicators have an alarm set for the BoJ meeting.) Even the Swiss National Bank, which hasn’t changed policy since 2015, garners more attention from the market than the BoJ. 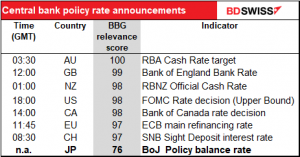 The BoJ’s quarterly Outlook Report may tinker with their growth and inflation forecasts, but that’s about it. BoJ Gov. Kuroda could comment on the weak yen at the press conference, which could cause a momentary flurry, but I doubt if they’re going to do anything about it. If anything I would expect they’re quite pleased even if they can’t say so out loud.