You are at:Home»Articles»How Will Trump’s Latest Tariffs On Mexico Affect US Markets?

President Donald Trump has threatened a new round of tariffs on imported goods from Mexico, and his decision could have a boomerang effect on the US economy.The proposed tariffs will go into effect on Monday, June 10, and will increase by 5% every month until hitting a maximum of 25% in October — unless Mexico “takes action to reduce illegal border crossings”.

Tariffs can have a negative economic impact on both countries involved in a trade dispute. Mexican firms exporting goods to the US could see a drop in sales, and American importers will likely see an increase in prices.

However, the US will definitely feel the sting of Trump’s tariff tantrum. If the 5% US tariff on all goods from Mexico takes effect and is maintained, more than 400,000 jobs in the United States could be lost, according to the analysis by The Perryman Group, an economic consulting firm.

The findings paint a bleak picture of the economic gamble President Donald Trump would be taking by imposing tariffs on Mexico, which is now America’s largest trading partner: “To impose tariffs on all goods from our largest trading partner will cause significant cost increases and other harms to the economy,” Ray Perryman, the CEO of the Perryman Group, wrote in the report. 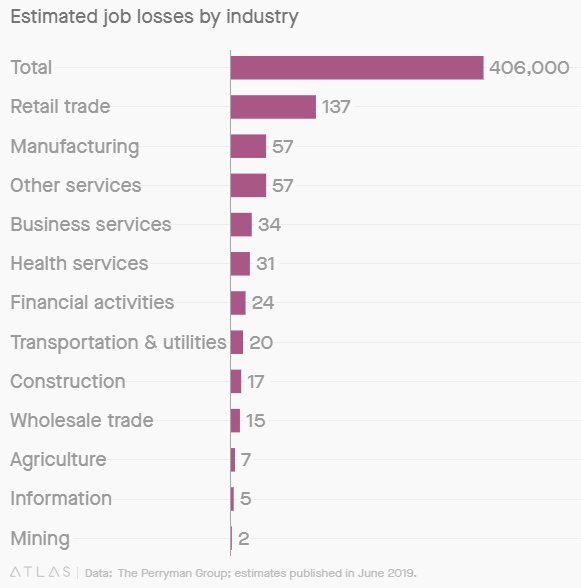 US Retail Shares May Dip

Tariffs on Mexico could have a negative effect on the retail sector, because the United States doesn’t just buy finished products from its southern neighbor. Much of the trade between the two countries is in raw materials and parts that cross the border multiple times before becoming things like cars and jeans. US customs authorities would charge the 5% tax every time which means that US retail and auto shares may note a long-term downturn.

What is worse, more than 50,000 jobs could disappear from the manufacturing industry, the sector that Trump has promised to prop up in part through his aggressive trade agenda.

The Fed Could Slash Rates Causing the Dollar to Tumble

JPMorgan Chase & Co.’s Michael Feroli reduced his third-quarter growth forecast to 1.5 per cent. “The greater worry — which could prompt a larger revision — is that capital spending weakness morphs into hiring caution, and from there into consumer spending,” he wrote in a note Friday. The weaker pace could sway the Federal Reserve to cut interest rates twice in 2019. This would in turn cause the dollar to slide against its peers.

U.S. refiners warned the Trump administration that tariffs on imports from Mexico could raise the cost of Brent and Crude. The United States imports over 650,000 barrels of crude per day from Mexico, about 10% of total crude imports, according to U.S. government data.

Mexico’s oil is heavy and refiners need it to blend with lighter U.S. oil to produce diesel fuel, gasoline and other products. Tariffs would drive up the cost of those imports — and Trump has said he would increase levies by 5% monthly until they reach 25% in October. Mexico is a prime supplier of heavy crude, which has been harder to come by since the United States imposed sanctions on Venezuela in January.