You are at:Home»MARKET PREVIEW»GBP up ahead of today’s UK Summer Statement, “Risk-off” on various concerns; JP machinery orders, China PPI 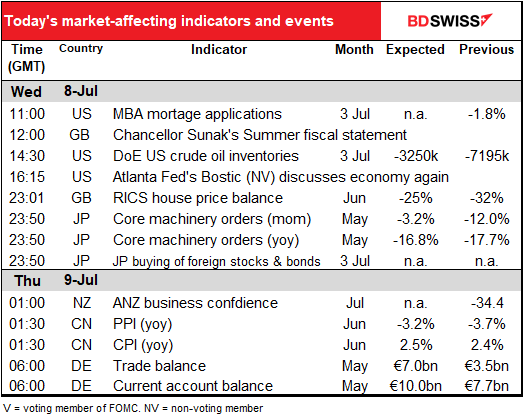 GBP was the star yesterday ahead of UK Chancellor of the Exchequer Rishi Sunak’s Summer Fiscal Statement, or whatever it’s called – I’m not sure it has a formal name. See the “Today’s Market” section for a full discussion. The point is that with interest rates converging all over the world and monetary policy on hold indefinitely, the focus of the market is on growth: which country will resume growth earlier and faster than others? With monetary policy on full blast everywhere, that comes down to fiscal policy (plus virus containment). If Sunak can goose growth up a bit, that should be positive for GBP.
The pound was particularly strong on the crosses, with EUR/GBP falling through the support level of 0.90, which encouraged some selling by quantitative hedge funds. That may be why EUR was the worst-performing currency today.
Elsewhere, it was a “risk-off” day with the S&P 500 down 1.1% and the NASDAQ off as well. There are growing concerns about the global recovery as Melbourne, Australia – the country’s second-largest city — went into a six-week lockdown; the European Commission downgraded its GDP forecast for the Eurozone to -8.7% from -7.7%; and Atlanta Fed President Bostic said growth in his region, which includes hard-hit Florida, may be leveling off (see my discussion about Mr. Bostic’s comments below). The situation in the US is really really bad: Several US states have substantially more new virus cases than the entire Eurozone (population 342mn, more than the entire US). 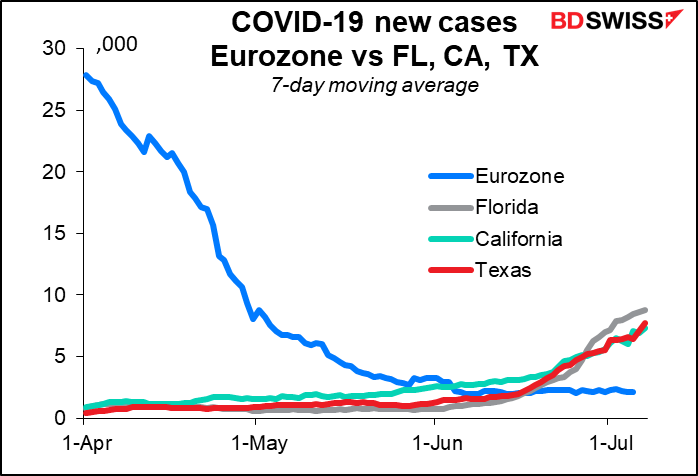 Was the EUR/GBP selling the only reason why EUR/USD moved lower, or is it partially because of the problems in the US? Perhaps we are seeing the dollar’s strength coming back in times of crisis, even when that crisis is in the US. Or on the other hand, it might be because of hopes for more stimulus in the US. There’s evidence though that the crisis is helping to focus minds in the US: Senate Majority Leader McConnell yesterday indicated that he’s willing to pass another stimulus bill and the White House said they want it delivered by the first week of August. Considering what I said earlier about the market focusing on growth, the prospect of further aid could be helping the dollar today.
This morning though stocks are mixed in Asia, indicating a better tone. We could see some mean reversion with AUD and CAD recovering during the day.

Talking points: there’s a story on Bloomberg this morning saying that some of Trump’s top advisers “want the US to undermine the Hong Kong dollar’s peg to the US dollar” to punish China for its recent moves there. Actions might include limiting the ability of HK banks to buy dollars. The idea apparently hasn’t been suggested yet, and to be honest I think it would be difficult to implement – I can’t see how they would do it successfully, and its implications for other pegged currencies, including those of US allies in the Middle East, would be quite negative.

Today’s market
The main thing on the schedule for today, as mentioned above, is UK Chancellor of the Exchequer Rishi Sunak’s Summer Fiscal Statement The aim in this quasi-budget will be to shift from supporting the economy with emergency measures to stimulating the economy by encouraging individuals and companies to go out and spend, spend, spend. So the Chancellor is said to be considering cutting VAT on the hard-hit hospitality sector (aka pubs) and a temporary cut in air passenger duty to encourage people to fly somewhere (how that will help the UK hospitality industry is an as-yet unsettled question, but I’m sure Cyprus will be grateful in any case). He’s expected to give companies GBP 1k for every youngster they offer a trainee position, in an effort to cut youth unemployment. The FT has also revealed that the package will include a big wad of money for insulating homes & public buildings. GBP 1.5bn for theaters and museums. That sort of thing.

Impact on the pound: Nowadays, the market believes that growth is good. If Sunak can convince the market that the package is going to help Britain to grow out of its problems, then it could be positive for the pound. But the problem with these semi-annual budget statements from Britain is that much of the contents are leaked ahead of time, so it’s difficult to surprise the market. So far the leaks haven’t been particularly stunning, and in fact have been somewhat of a disappointment. GB has rallied nonetheless. If Sunak manages to pull a rabbit out of his hat, e.g. with a wider-than-expected VAT cut, then the statement could have some impact. But if it’s just formally announcing what’s already been in the FT, Telegraph etc., then the market has already digested that and we’re likely to see a “buy the rumor, sell the fact” response.

Then nothing much until the US starts up.

MBA mortgage applications have been declining recently, in line with the usual seasonal pattern, but remain well above what’s been normal for the past decade. This is part of the encouraging US housing story, which has been the stand-out strong point in this crisis. 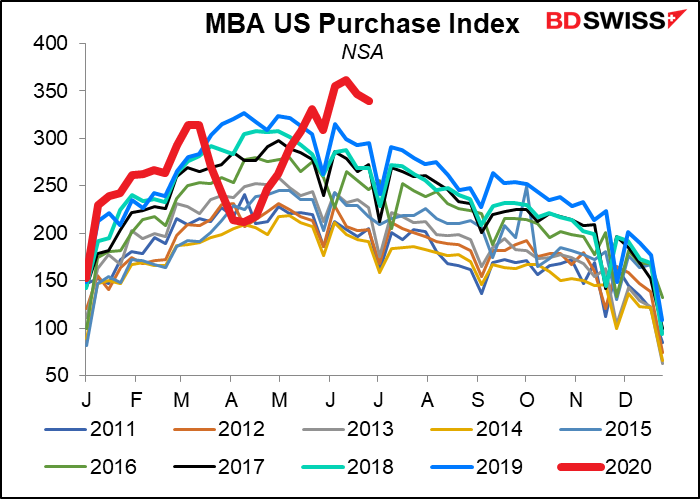 The US Energy Information Agency’s weekly US crude oil inventory figures are forecast to show another decline of some 3.3mn barrels. However, the American Petroleum Institute (API) yesterday estimated that inventories rose by 2.048mn barrels. Oil prices lost some of the day’s gains after the news came out but are still slightly higher than Tuesday morning. 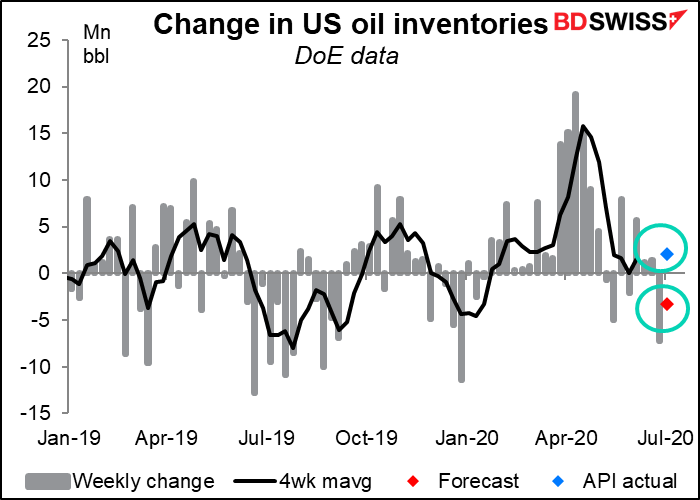 Atlanta Fed President Bostic (non-voter) speaks again today. He set the cat among the pigeons in an interview with the FT yesterday when he said that high-frequency data had shown a “leveling off” of economic activity both in terms of business openings and mobility. While he was quite circumspect, as central bankers usually are, he’s probably worried that the “V”-shaped recovery in his region – which includes hard-hit Florida – could be more like a “W.”
The Atlanta Fed territory covers the Sixth Federal Reserve District, which includes Alabama, Florida, and Georgia, and portions of Louisiana, Mississippi, and Tennessee.

The Homebase app small businesses data are only available to the non-paying public with a lag, but the available data – up to 25 June – do indeed show that the three states were starting to see a decline in the number of small businesses that were open, in line with the rest of the country. The trend was especially noticeable in Florida. 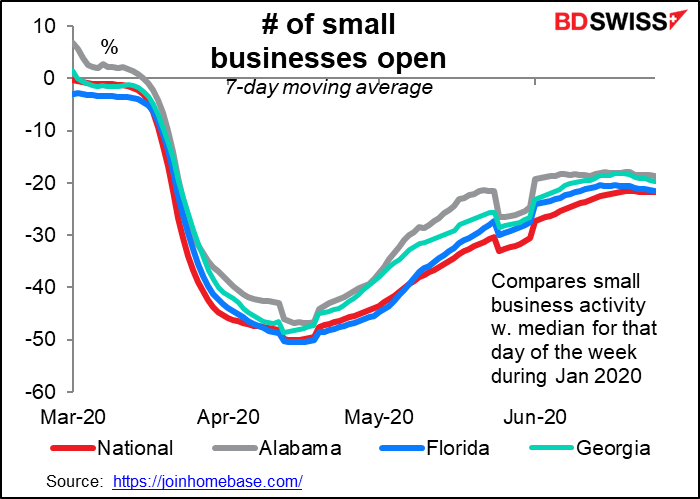 Below is the updated Apple mobility data for requests for driving instructions in those three states compared to the data for the US as a whole. Florida hasn’t yet returned to normal and indeed is starting to turn down again. 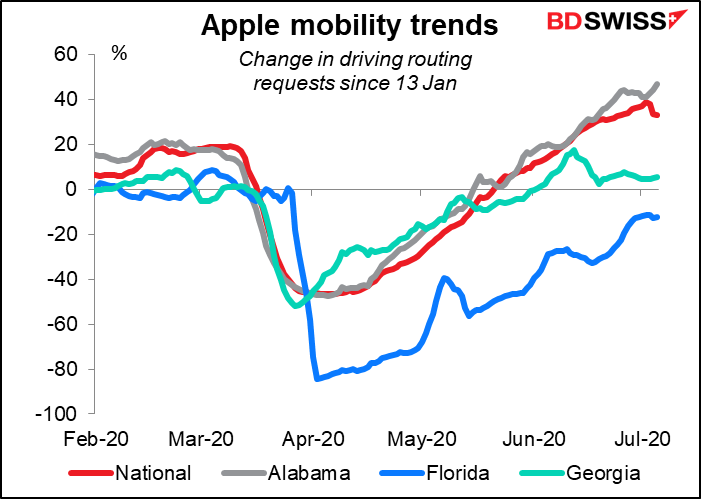 The UK Royal Institution of Chartered Surveyors (RICS) house price balance is expected to improve a bit, but remain deeply in negative territory. This is a sentiment indicator of chartered surveyors – a diffusion index of the proportion of respondents reporting a rise in prices minus those reporting a fall. The negative figure would agree with the data from last week’s Nationwide house price survey, which found that house prices had fallen in June for the second month in a row. 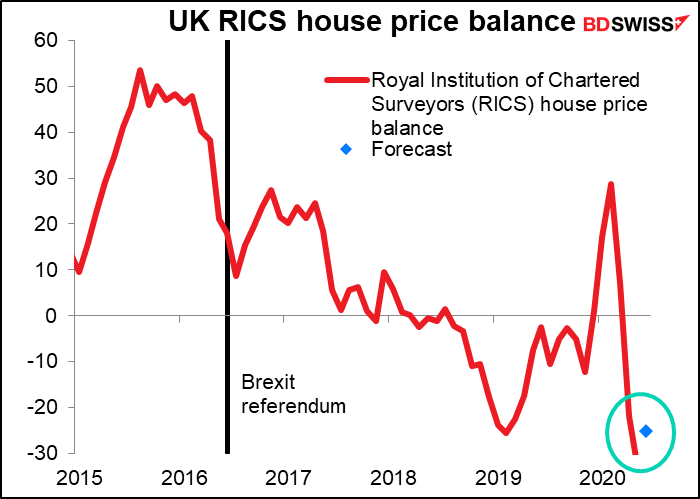 Japan’s machinery orders are expected to be down less on a mom basis in May than they were in April, but still down nonetheless, which is disappointing after the sharp drop in April. 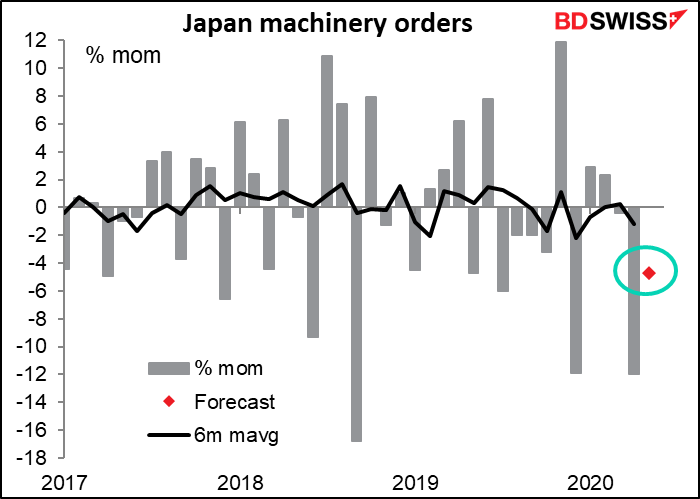 The yoy rate of decline is expected to bottom out. Here one can discern a glimmer of a trend in the data, and in this case it’s not a good one. 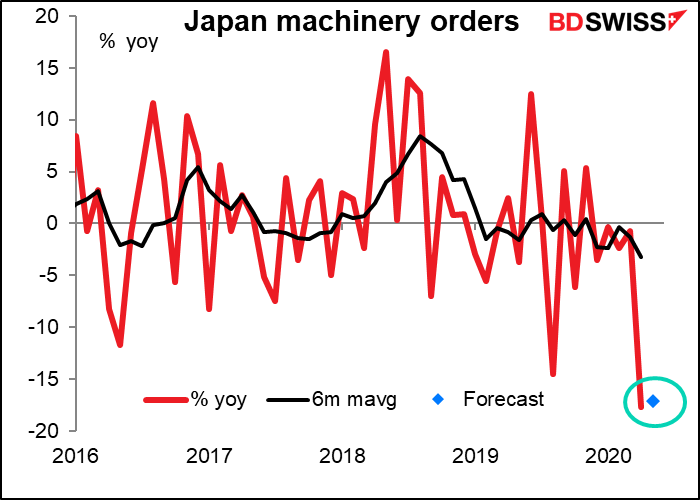 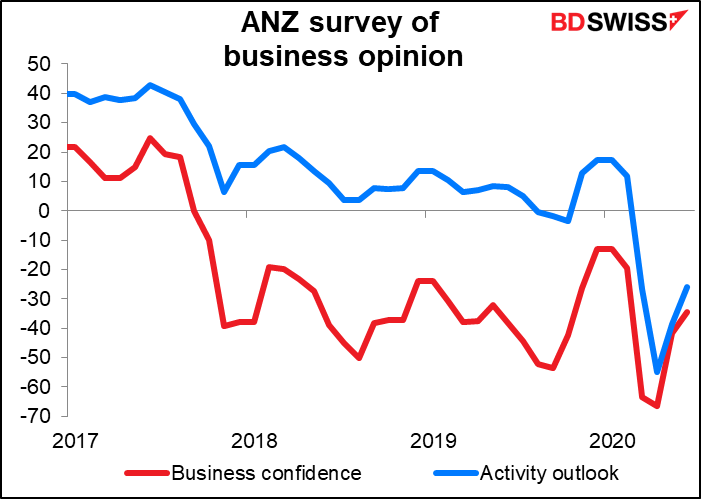 China inflation data is expected to show a one-tic rise in consumer prices – not necessarily indicative of much, as that’s usually caused by changes in Chinese food prices – but more importantly, a slowdown in the rate of deflation in the producer price index (PPI). This is significant, as Chinese producer prices are a major determinant of import prices around the world. Furthermore, they’re affected by business conditions in China. If PPI deflation has bottomed out, that gives us some indication of how long deflationary conditions might persist in other countries as they emerge from lockdown and start to get back to normal, if possible. 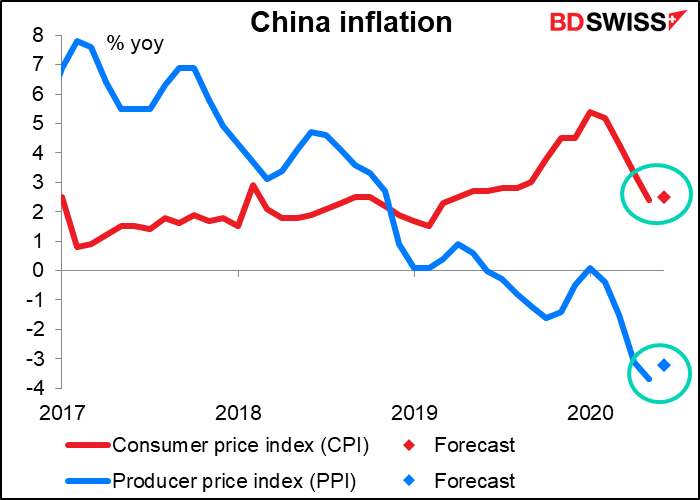 Then once again an early-morning German indicator that will be announced while I’m struggling to get this out. The German trade surplus is expected to rise slightly, as is the current account surplus, as exports are expected to recover a bit more than imports (forecasts are +14.0% mom vs +12.4% mom, respectively). Still, the country is expected to continue to show the signs of the global slowdown in trade. We saw that also in the factory orders and industrial production data, which remain weak. 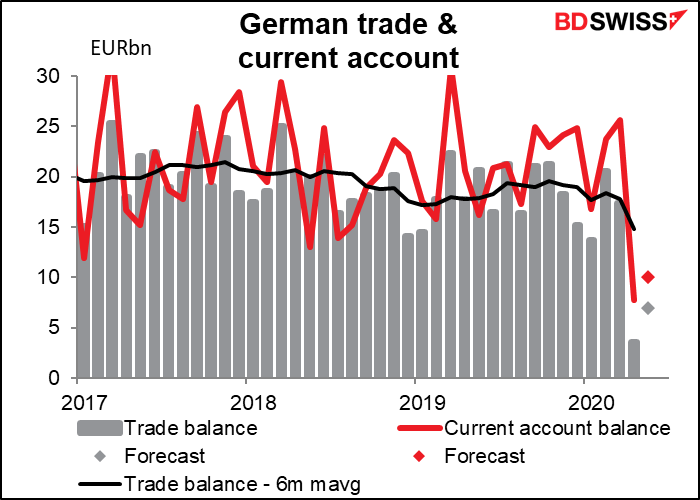 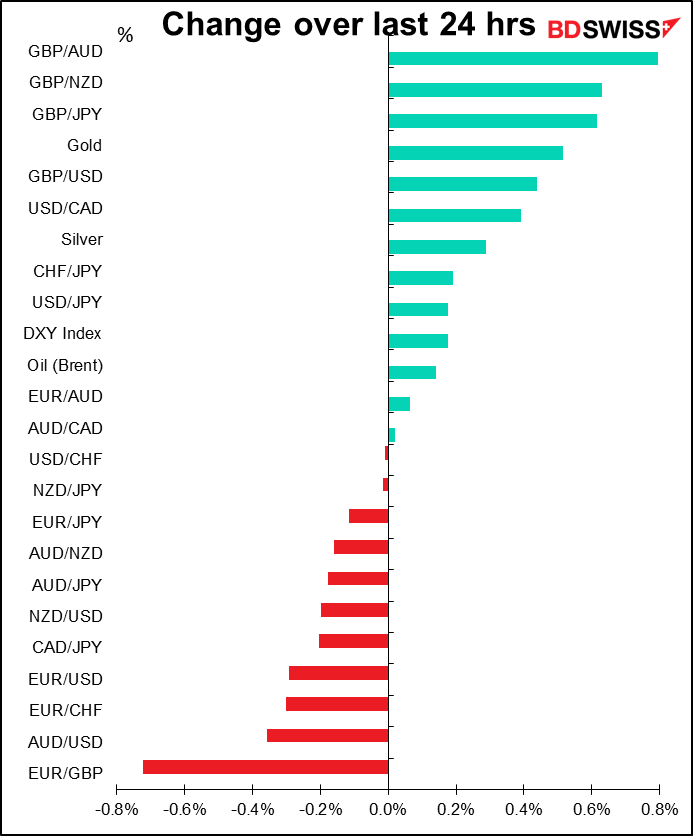