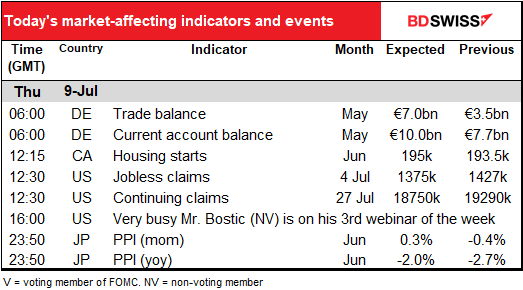 Yesterday was a big “risk-off” day during the European trading day, but by the time New York closed, sentiment had shifted notably, thanks to some good news on the trade front before the US opening. The US Ambassador to Belgium commented that the US is committed to “an international solution for the digital services tax” (a point of contention in trade talks with the EU), and White House Advisor Kudlow assured the markets that “we are still very much engaged in the Phase One China trade deal.” The S&P 500 opened up +0.3% and although it was in negative territory at one point during the day, managed to close up 0.8%. The tech-driven rally pushed the NASDAQ index to another record close.

The improved sentiment on Wall Street added to the general move lower in USD. USD weakness may also have been the counterpart to CNH strength, encouraged by a strong “risk-on” sentiment in China. The China “A”-share market has continued to climb (CSI 300 index +0.4% yesterday, +1.4% this morning). EUR/USD generally tracked USD/CNH during the day.

Weakening risk appetite during the early European day led to downward pressure on EUR/CHF. It appeared however that the Swiss National Bank (SNB) may have been intervening to prevent the pair from falling through 1.06, which appears to be their “line in the sand” for the time being. This might be a good opportunity to play the range.

CAD was the best-performing currency during the day as Canadian bond yields rose in response to the announcement of a huge increase in financing needs. Gross bond issuance will be CAD 409bn during the fiscal year, vs CAD 124bn in the previous FY.
Canadian government bond yields closed up 2 bps in the 2yrs and 6 bps in the 10-years, narrowing the yield advantage of UST over CAGB and pushing USD/CAD lower (i.e., CAD higher). 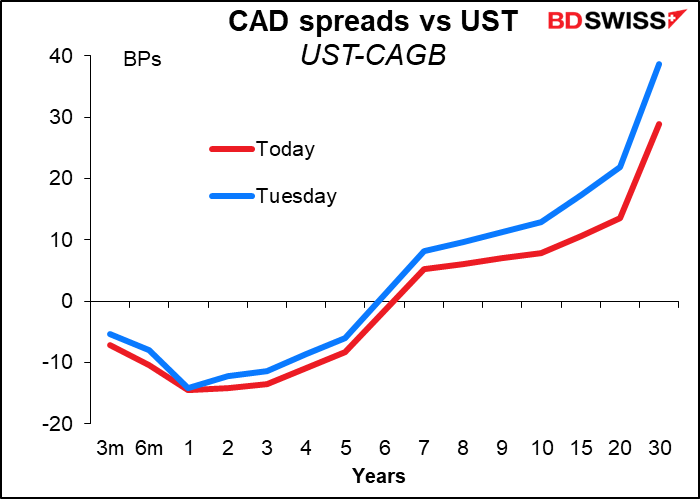 The move is quite in line with standard economic theory on a currency’s short-term response to an expansive fiscal policy: 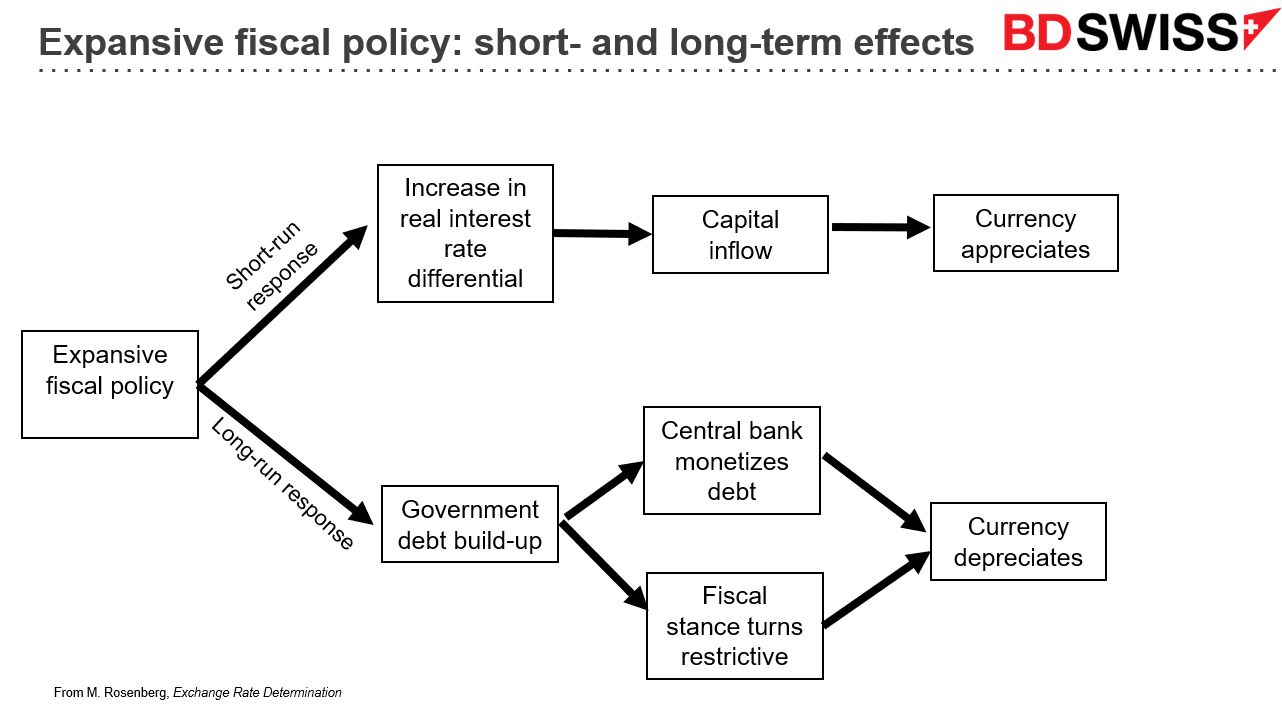 I’m not sure how much the increased issuance really matters to the Canadian bond market – the Bank of Canada has shown it’s willing to mop up everything available. It’s exploded its balance sheet far more this year than any other central bank (from CAD 119bn in January to CAD 528bn today, 4.4x). 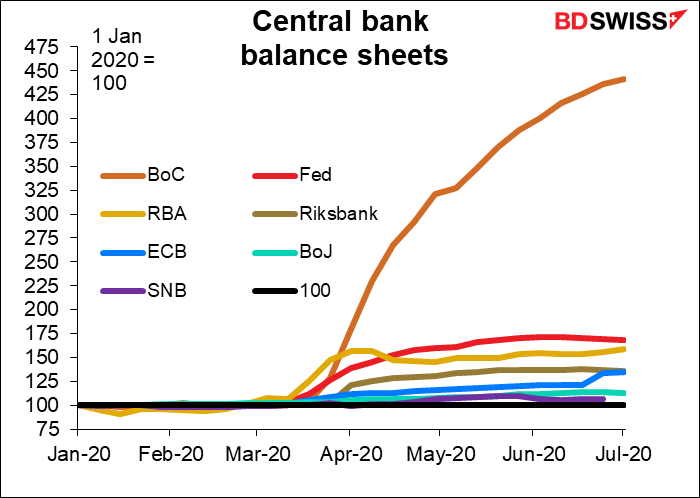 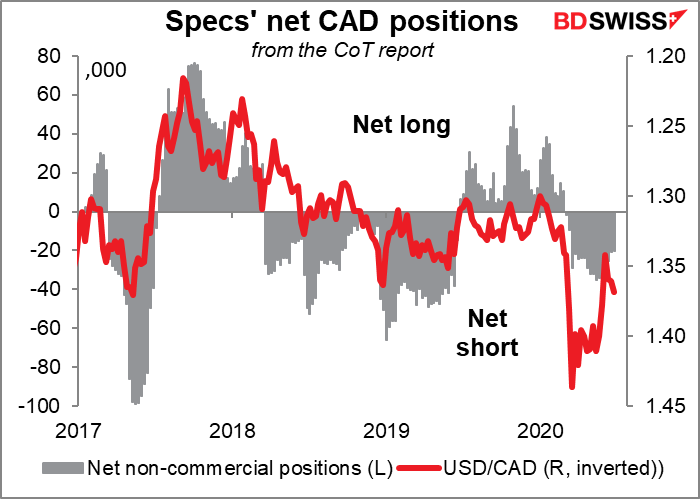 Although GBP was the center of attention yesterday thanks to Chancellor Sunak’s Summer Fiscal Statement, the net result for the currency was sweet FA, to use the technical term. (Please don’t quote me on that!!!) While the Chancellor did manage to exceed expectations slightly and push GBP higher, at the end of the day it was USD weakness, not GBP strength, that caused GBP/USD to rise. GBP fell slightly vs EUR. I am getting a bit more optimistic about GBP though, as it appears the Europeans are more interested in compromising than I had thought. EU Chief Negotiator Barnier hinted the EU is prepared to offer “equivalence” to the UK financial sector, thereby allowing it access to EU markets. That would be a big plus for the UK.

The big feature of the market yesterday though was probably gold, which broke through $1,800/oz for the first time since 2011 and is now trading at around an eight-year high. Gold has been one of the best-performing assets in 2020, up over +19% YTD. Perhaps people are once again getting worried about the explosion in money supply, as happened after the Global Financial Crisis – people worried then that the quantitative easing measures would cause hyperinflation, although in the event nothing of the sort happened. The same concerns are surfacing again now. 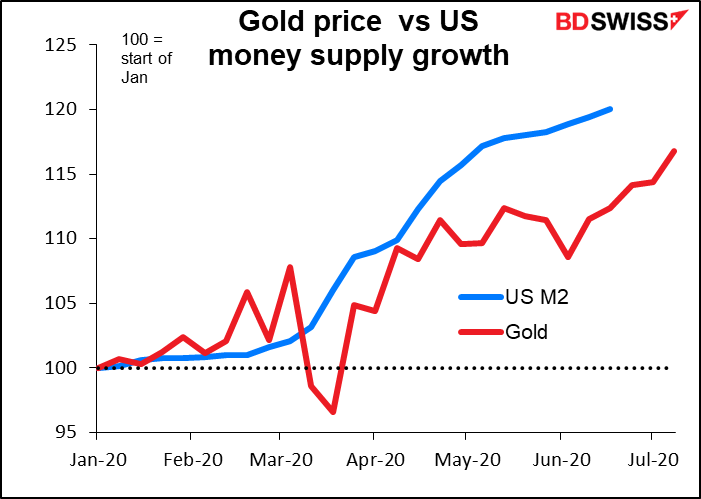 The weekly Japan capital flow figures showed that Japanese investors turned around and sold some of their foreign bond holdings in the latest week. They were small net buyers of equities, but overall their actions resulted in a net repatriation of funds into Japan.

Foreigners however were sellers of both bonds and stocks. Together, the two resulted in a small net outflow of funds from the country. So far it’s been enough to offset the current account surplus and keep the yen from appreciating, however if the outflow falls further, it might not be 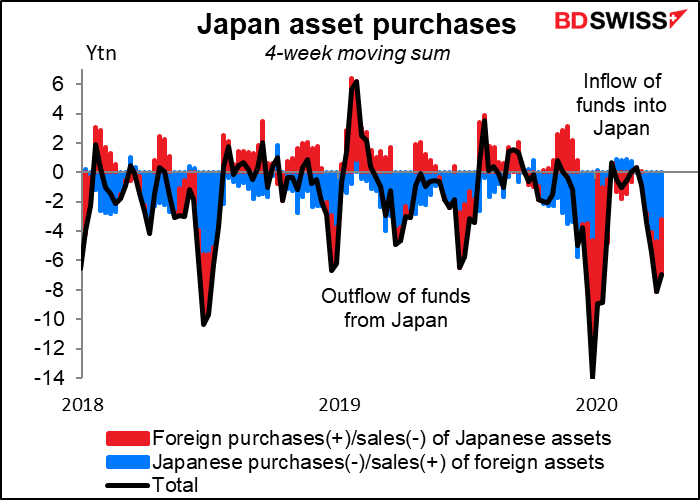 As usual, we discussed the German trade balance and current account yesterday, as it’s probably out by the time you read this report.

So the new just wait until North America wakes up.

Housing has held up fairly well in Canada, as it has in the US. Housing starts have been trending lower for some time and continue to trend lower, but except for the big drop in April, there hasn’t been that much of a change in the trend. This month is expected to be about the same as last month. 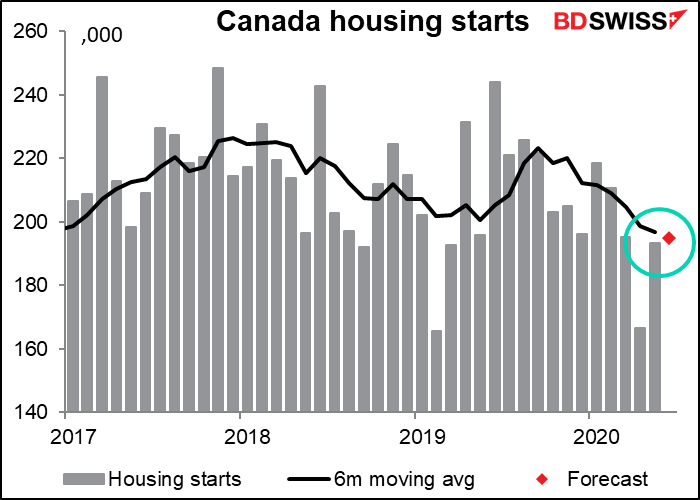 For the all-important US initial jobless claims, the market is forecasting that claims will continue to slow at the same pace that they have been over the last two weeks. 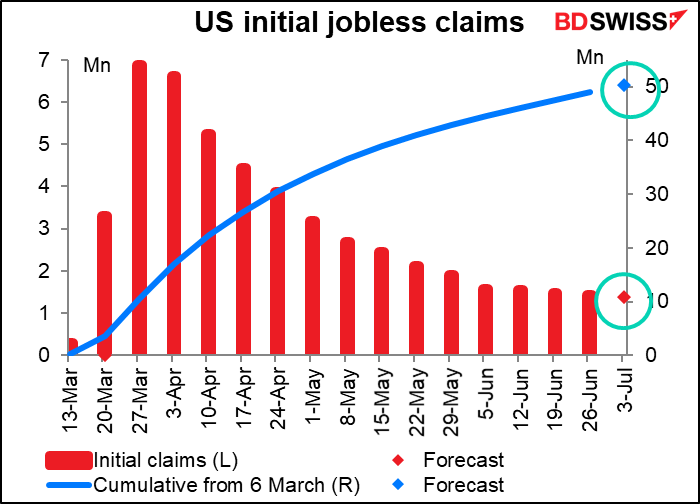 Two weeks ago, claims were down 58k from the previous week; last week they were down 55k; this week, the market expects them to be down 52k. Do I detect a pattern? My forecast: next week, the market will expect them to be down 49k.It’s a troubling pattern because the change in claims is getting smaller and smaller. Shouldn’t it be getting bigger and bigger? After all this time, who’s left to lose their job? If the forecast is correct, it will mean over 50mn people have filed for jobless claims since the rise began on 13 March. How can over 1mn people a week still be losing their jobs? I suppose we should ask workers at United Airlines that question. 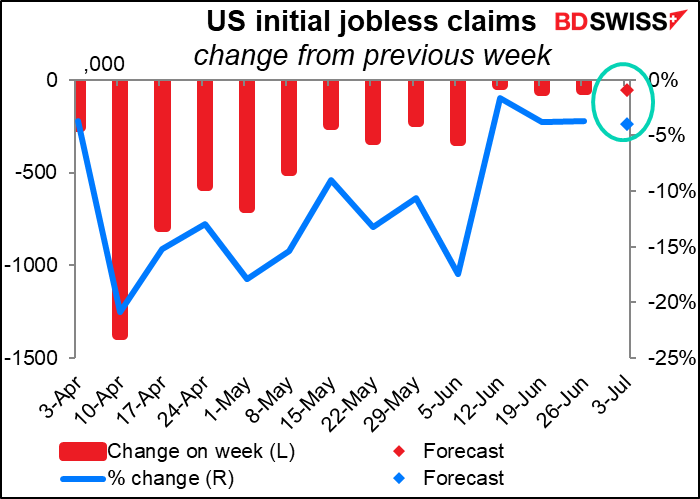 Continuing claims are expected to decline by 540k. That would be a big improvement over last week, when they were up by 59k. The average over the last four weeks has been -494k, not too far off the market consensus (which is actually just the median guess of 10 economists on Bloomberg). That would be good, because it would mean that despite over 1mn people losing their jobs every week, even more people are finding jobs. The May JOLTS report showed a surprising increase of 401k jobs during the month, so I guess it is possible. But here too, I’d like to see continuing claims falling at an accelerating pace. But it isn’t happening, or at least it isn’t expected to happen yet. 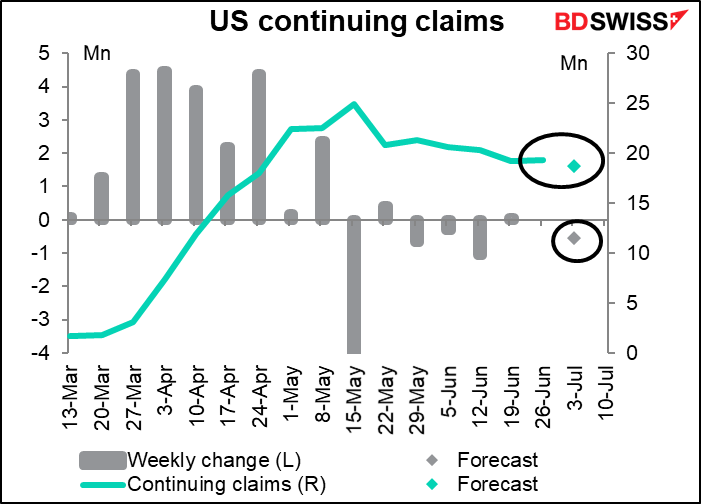 Japan’s producer price index has fallen on a mom basis for four consecutive months. It’s expected to be in positive territory this month, with the yoy rate of decline slowing a bit. Still, the downward pressure on retail prices – or on profit margins – continues. 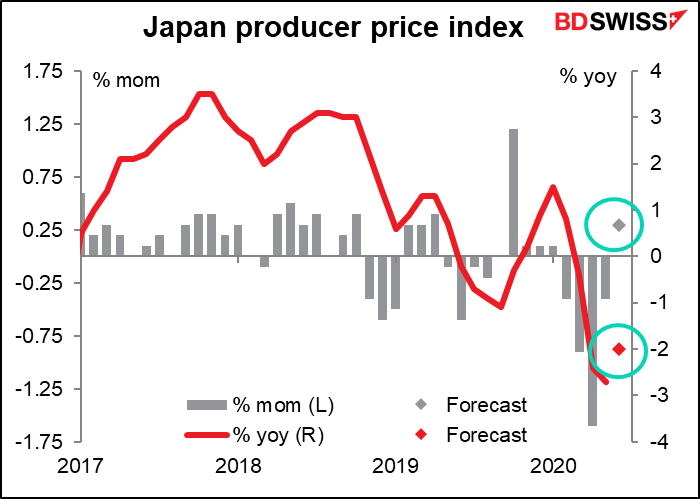 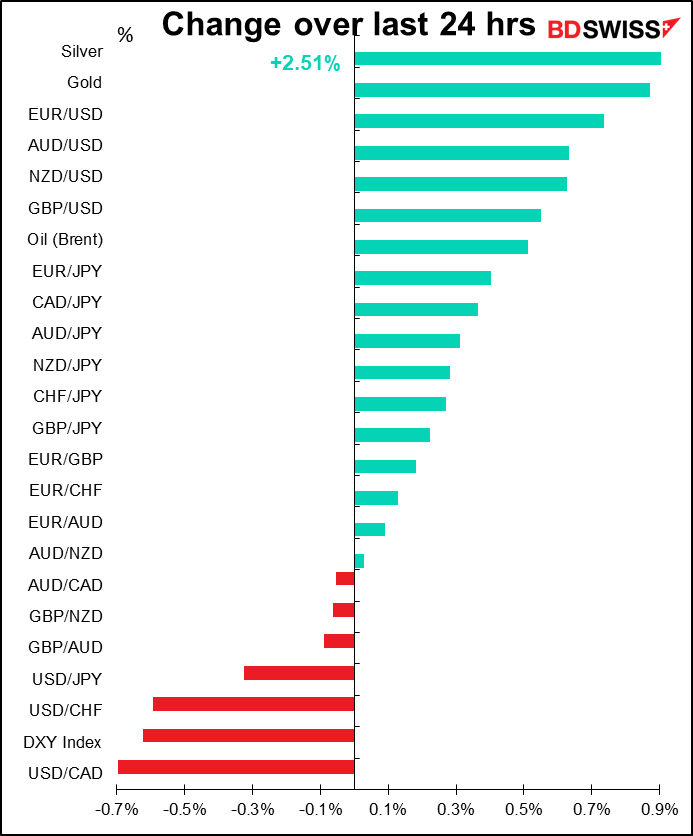