You are at:Home»Market Insights»December FOMC meeting: focus on forward guidance for asset purchases

The economic summary is likely to focus on the better prospects for the economy thanks to the roll-out of the vaccine, but emphasis how uncertain the prospects are, as usual. Although employment growth has stalled, I seriously doubt whether they will consider easing policy further. Most Fed speakers whom we’ve heard from since the last meeting have said that they think the current settings are “appropriate” and that fiscal support is a more appropriate way to aid, in Chair Powell’s words, the “parts of the economy that might need help to get that last span of the bridge in place to get to the other side of the pandemic.”

Instead, the main concern of the FOMC nowadays seems to be their asset purchases and in particular how to “enhance” their forward guidance on this topic. The minutes of their November meeting said:

Translated into English, that means they would say that under these or those conditions, such as this level of inflation or that level of unemployment, we’d be ready to start reducing our asset purchases or change their composition. This would make their forward guidance for their asset purchases more consistent with their forward guidance for interest rates. That’s appropriate nowadays because interest rates are no longer in play for the Fed – rates are at the “effective zero bound” and can’t be lowered further. Instead, any further monetary loosening will have to come through their asset purchases or other non-standard monetary policy. In the other direction, the Fed is likely to start tapering these extraordinary policies before they begin raising rates. 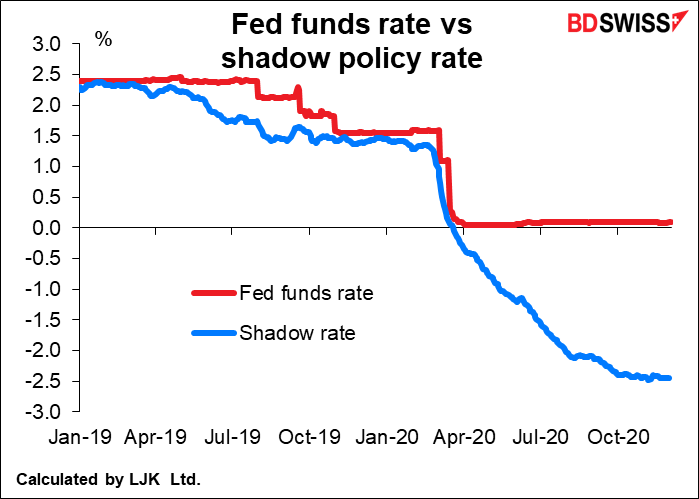 Just to review, here’s the Committee’s forward guidance with regards to interest rates:

The Committee decided to keep the target range for the federal funds rate at 0 to 1/4 percent and expects it will be appropriate to maintain this target range until labor market conditions have reached levels consistent with the Committee’s assessments of maximum employment and inflation has risen to 2 percent and is on track to moderately exceed 2 percent for some time.

So in theory they could say that they expect “to increase their holdings of Treasury securities and agency mortgage-backed securities at least at the current pace until labor market conditions have reached…” etc etc. However, because of the different views on the Committee about this issue, they’re likely to be vaguer about it. The key thing is that they will want to a) indicate that they will stop QE before they start raising rates, and b) give some indication of under what economic conditions they might start tapering purchases. Market participants can then cross-reference those conditions with the forecasts in the Summary of Economic Projections (SEP) to get a rough idea of how long the Committee expects to continue with the purchases.

They may also continue to mention something about the purchases enabling “smooth market functioning” and “fostering accommodative financial conditions.” 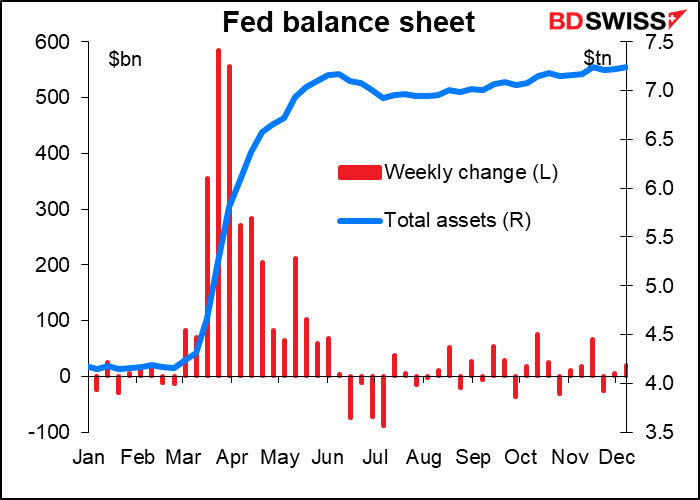 There could be some dissents to these changes. Dallas Fed President Kaplan and Minneapolis Fed President Kashkari both dissented to the rates guidance language in the September statement, albeit from opposite perspectives. There will also be a new member of the FOMC, Christopher Waller, former Director of Research of the St. Louis Fed, who was recently confirmed to the Board of Governors. He’s structurally dovish, which is why Trump nominated him in the first place. I therefore don’t expect him to deviate much from the current consensus on the Committee.

On a more concrete note, they could discuss making some changes in their asset purchases, such as following the Bank of Canada’s example and reducing the overall amount of bonds that they purchase while concentrating their purchases more into the long end of the market – same bang for fewer bucks – but I don’t think they will take that step quite yet.

The meeting will also include an updated Summary of Economic Projections (SEP), which are likely to show improved prospects for the economy as growth has been more resilient than expected since the September meeting. The roll-out of vaccines may also cause some members to upgrade their medium-term forecasts, although Chair Powell has stressed the uncertainties around the vaccine timelines and the course of the pandemic.  Moreover, the recent rise in vaccine cases and the uncertainty about further fiscal support to the economy are likely to temper any enthusiasm. Most importantly, I don’t expect them to change their forecasts for interest rates in the “dot plot.” I expect that they will still signal that rates aren’t likely to rise until 2024 at the earliest, although there could be a few more dots forecasting higher rates by end-2023 (in September, 13 of the 17 Committee members expected rates to be unchanged at end-2023, while four saw higher rates).

For Fed Chair Powell’s press conference, the main areas of focus are likely to be any changes to the Fed’s forward guidance, as mentioned above, and how their economic outlook might have changed, as reflected in the SEP.

Market Impact: The impact on the market depends on how specific the new guidance is. Does it change the market’s estimates for when “lift-off” might come? Markets discount events ahead of time. Even “thinking about thinking about” reducing its asset purchases is the first step in the Fed normalizing monetary policy, which eventually would lead to it raising interest rates. Therefore, the more clarity the Fed provides on when it might start tapering down its asset purchases, the more the market is likely to focus on this eventuality. And the Fed’s vague, conditional guidance is in contrast to that of many other central banks that have set out specific time-based guidance, thereby allowing people more room to imagine that the Fed could start tightening before others.

One of the main assumptions underlying the market’s USD-negative consensus is that the Fed is likely to remain on hold for the foreseeable future. If they do anything to change that assumption, investors’ incentives to sell dollars or their willingness to use USD as a funding currency could be diminished. That might cause the dollar to strengthen.