You are at:Home»MARKET PREVIEW»GBP down on Virus worries, Oil weakens but Copper gains; Georgia Senate Races 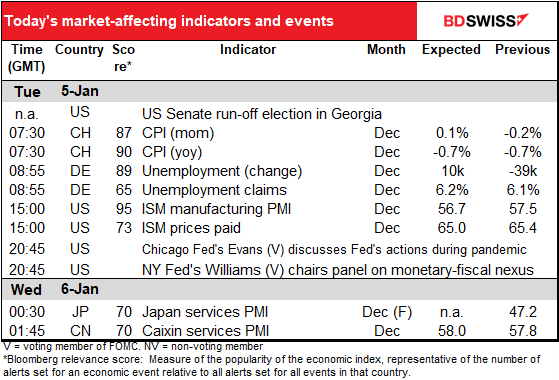 The reasons for the two weakest currencies on my list aren’t hard to divine.

For the beleaguered pound, the successful conclusion of the Brexit talks offered just a momentary breather. It was back into the dumps after PM Boorish Johnson ordered a third economically disastrous national lockdown for England, following a similar move in Scotland. He warned that the National Health Service risked becoming overwhelmed by a surge in cases of the new Covid-19 strain. The lockdown will last at least until mid-February.

The UK is definitely in bad shape with regards to the virus. Other European countries (we can still call the UK “European,” can’t we?) saw a spike around November but have since gotten their situations somewhat under control. In the UK however it’s still headed up, up, up. 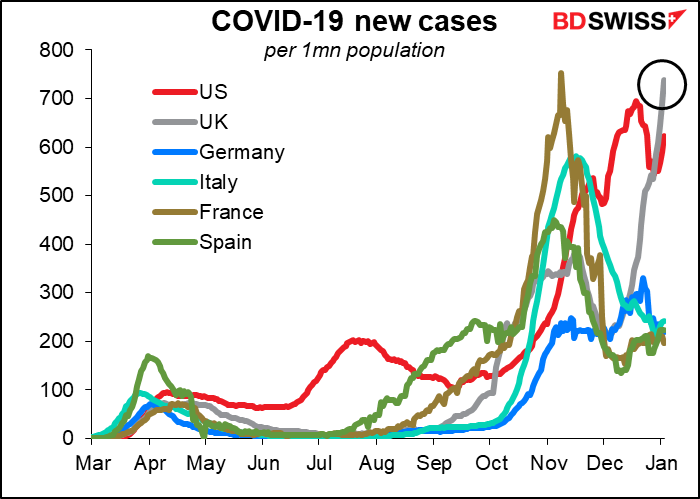 Combined with the kick-in-the-pants from Brexit, the general lockdown is bound to make the Bank of England tilt dovish. The overnight index swap (OIS) market is now forecasting a base rate of -0.12% by the end of this year (i.e., fully discounting negative rates), vs -0.05% a week ago (i.e., a 50-50 chance of negative rates). That’s definitely negative for the pound.

Meanwhile, no prizes for guessing why CAD is the #2 loser:

Which raises the question, why was oil down? The answer there is that OPEC+ talks were unexpectedly suspended because of a disagreement over whether to raise output in February. Russia proposed raising output, but the majority of members, including the Saudis, opposed the idea. In fact the two biggest producers have diametrically opposed positions: Russia wants to increase output by 500k bbl/d while Saudi Arabia wants to cut output by the same amount. Rising US-Iran tensions and Iran seizing a South Korean-flagged tanker in the Strait of Hormuz didn’t help things, either.

The Saudi view recognizes that the worsening virus situation is likely to restrict mobility and further reduce demand for oil. In Germany for example, the Bild newspaper reported that the country’s lockdown, scheduled to end on Jan. 10, would be extended until Jan 31. Chancellor Merkel meets today with the state premiers to discuss the question. And as I mentioned yesterday, Japan is also considering declaring a state of emergency. Although that wouldn’t involve any legal restrictions, just a “request” for shorter business hours by bars & restaurants, private industry seems to be taking action. Mobility data reportedly showed that there were about half as many people as usual Monday morning in parts of Tokyo normally packed with commuters, with similar results in Nagoya and a one-third reduction in Osaka.

So there are good reasons for currencies that fell, but what about the ones that rose, CHF and EUR? Interesting question. The move came largely at the opening hours in Europe yesterday despite the stronger risk sentiment at the opening, after which CHF was fairly stable. This morning’s surprisingly weak Swiss inflation data (CPI weakened to -0.8% yoy vs -0.7% yoy expected) doesn’t seem to have impacted the currency.

One point worth noting is that while oil was weak (red line), copper prices rallied, indicating that expectations of global growth remain intact. Plus the news that the New York Stock Exchange (NYSE) backtracked from its plan to delist China’s three biggest state-owned telecommunications firms helped risk sentiment somewhat, as it lowers the US-China tensions a bit. That may have helped the “risk-on” mood that sent EUR/USD higher and lifted most Asian stock markets this morning. The S&P 500, which closed down 1.48%, is looking to open +0.1% this morning.

Tomorrow is a holiday in Cyprus, meaning I won’t be publishing a comment. So I’m going to go through two days’ worth of events and indicators today.

There are two US political events on the schedule this week, one that’s important and one that’s a ridiculous bit of political theater that would be funny if it weren’t borderline seditious.

Today we have the run-off election for the two Senate posts from Georgia. This is a major, major event for the markets.

Right now the 100-member Senate is 50-48 in favor of the Republicans. If the Republicans win at least one of the two seats that are up for grabs, they will have control of the Senate. Since all spending bills have to pass both Houses of Congress, they will be able to block President-elect Biden and the Democrats from passing their agenda. (Cue The Crazy World of Arthur Brown) If this happens, watch for them to suddenly get all concerned about the budget deficit and passionate about the need to cut back on social programs to get spending under control – never mind their huge tax cut for the wealthiest & companies in 2017 that sent the deficit soaring then. Biden would also have problems getting Senate approval for his cabinet appointments, judges and any Federal Reserve Board nominees.

If however the Democrats win both seats, then the Senate will be 50-50 and Vice-President Elect Harris will have the tie-breaking vote. (Cue Leo Reiseman). In that case, we can expect another fiscal package that will probably up the $600-per-person payments to at least $2,000 and increase the weekly payments back to $600, plus a large infrastructure spending package later in the year. Wall Street economists would be busy revising up their economic forecasts. Stocks would be up and in the “risk-on” euphoria, the dollar would probably decline even more than it is already.

The polls show both Democrats ahead, but just by around 2 percentage points, so not really to be trusted. For reference, President-elect Biden had a +1.2 ppt lead in the polls just before the election and won the state by around 12,000 votes or 0.2%.

The betting market PredictIt.org shows that Democrat Warnock has for some time been favored to beat Republican Loeffler, while Democrat Ossoff has just pulled ahead of the appalling Perdue. After being publicly humiliated in their first debate, Perdue refused to debate Ossoff again. (You can see the hilarious reason here.) And when asked recently what he had accomplished in his six years in the Senate, Perdue couldn’t come up with an answer. Maybe he could’ve mentioned his 2,596 stock trades during this time, including many in companies that were under the supervision of a committee that he sat on. This made him far and away the most active trader in Congress. 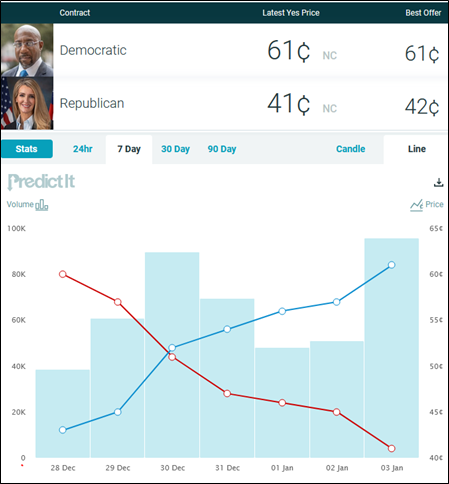 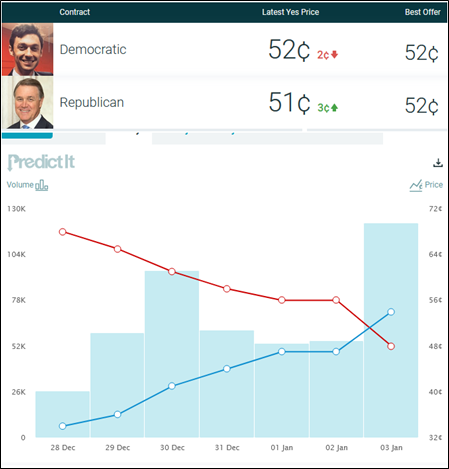 The polls close at 19:30 local time (00:30 GMT) and the first results should start to trickle in after that. However it could take several days before we know for sure how the vote turned out.

Then tomorrow we have the last gasp of the US presidential election, when the Vice President opens the envelopes from the various states’ Electoral Colleges, tallies the votes, and announces the winner (spoiler alert:  not him!). We can discuss that tomorrow.

As for the data, it starts off with Swiss consumer prices, but that’s already out, as I mentioned. 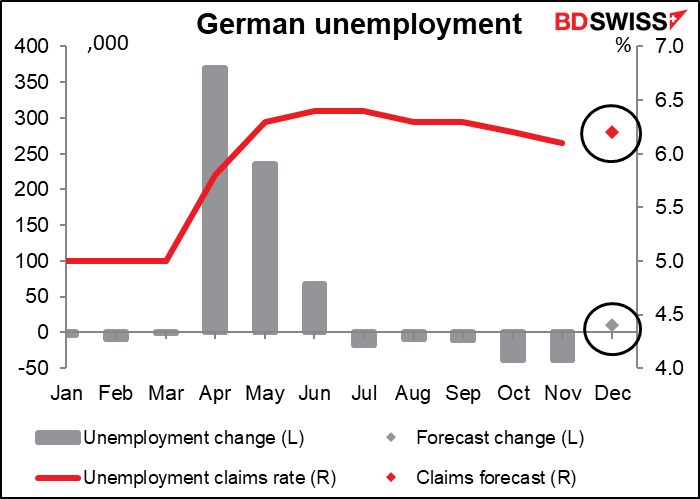 But given the virus situation in Germany during December, that’s not too bad, actually. The country saw the highest rate of new virus cases ever during December, even higher than the Eurozone average. I therefore don’t think that this number will hurt EUR sentiment. 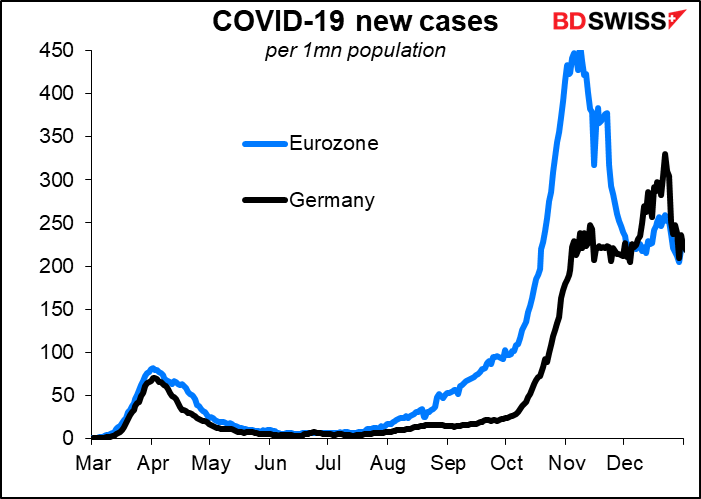 The Institute of Supply Management (ISM) releases its version of the manufacturing purchasing managers’ index (PMI). This usually comes out 15 minutes after the final revised Markit version of this indicator, but due to the holiday the final Markit number came out yesterday. That was revised up sharply to 57.1 from 56.5, a big surprise since the market consensus was for it to be revised down slightly to 56.3. The net result is that the ISM is expected to be almost the same as the Markit PMI. It’s possible. Note that the sharp upward revision to the Markit index yesterday didn’t do anything for risk sentiment, so I doubt whether today’s indicator will have that much effect on markets unless it’s wildly different from expectations. 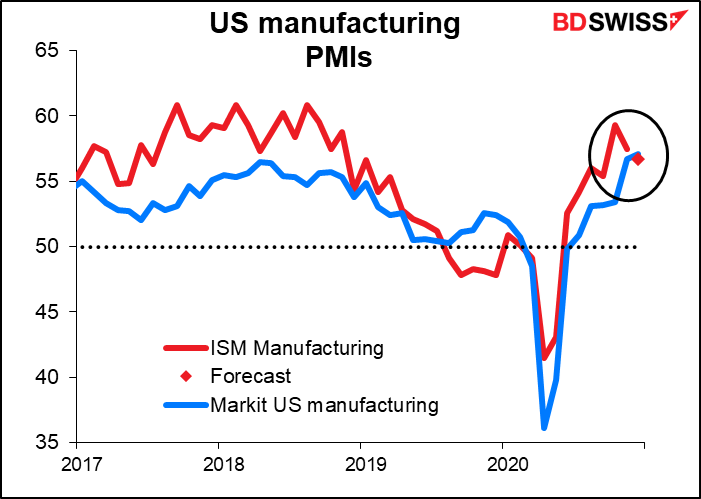 The Caixin/Markit service-sector PMI for China (red line) is expected to rise further, although the official version of this index (blue line) fell during the month. Neither seems to be particularly reliable – as you can see, the official version has suspiciously little variation month-to-month, while theCaixin/Markit version uses an unrepresentative sample of the nation’s industries, so I’m hard-pressed to say which I trust less. In any event, rightly or wrongly, a rise in the service-sector PMI would probably help promote a “risk-on” mood that might boost AUD. 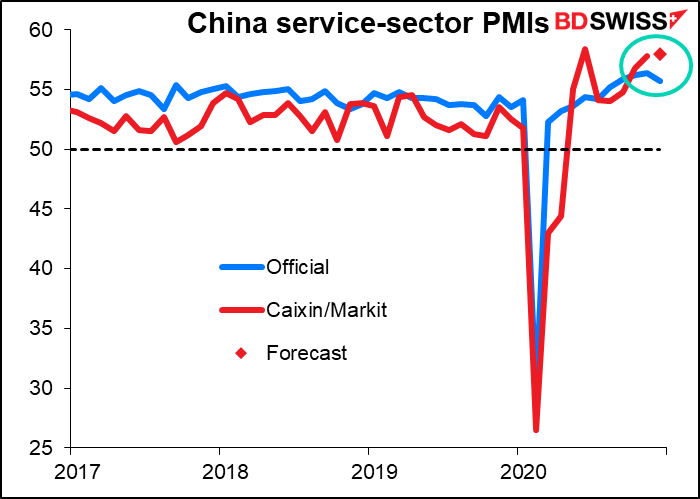 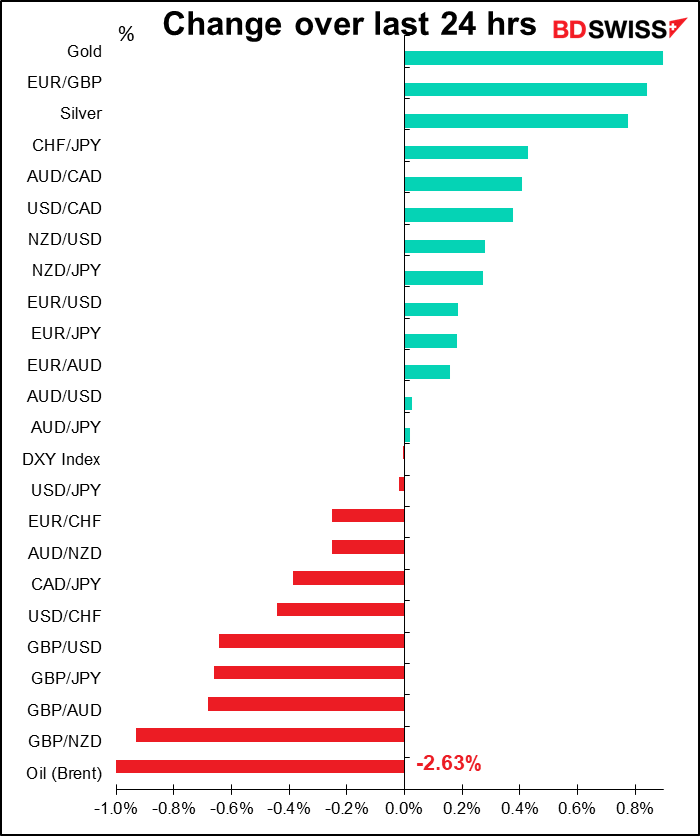