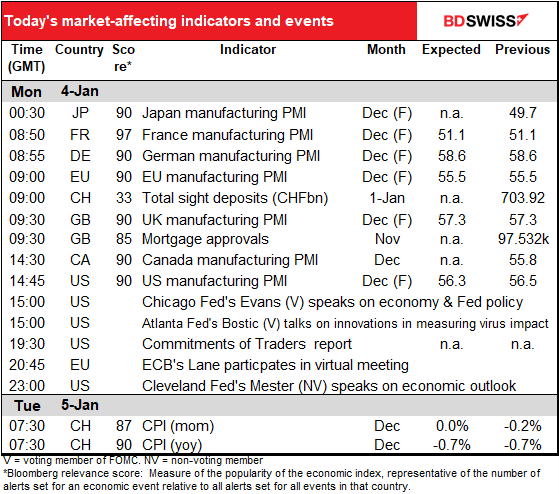 Well, it’s a New Year. Usually that’s just a date in the calendar, but this time, the date coincides with several major changes in the the background to the market. Specifically, we no longer have to wonder if there’s going to be a “no-deal” Brexit and if the US Congress will agree to renew the expiring support for the unemployed. There was indeed a Brexit agreement, albeit a “skinny” one that left many issues undecided (particularly the regulation of financial services), and there was a new fiscal agreement, albeit one that cuts the weekly benefits in half while seriously reducing the one-off stimulus payments.

Otherwise of course the main themes don’t change just because the year does. We will still be watching the progress of the virus vs the roll-out of the vaccine. How quickly will growth recover? When will central banks begin “thinking about thinking about” normalizing policy? We’ve probably got at least a year of “no change” central bank meetings ahead of us, which only makes reading the tea leaves of officials’ comments on policy that much more important.

Markets ended the year on a high note and continued to gain this morning.  The S&P 500, the Dow Jones Industrial Average and the MSCI World index all ended 2021 at record levels as the successful conclusion to the Brexit talks and the US fiscal agreement removed a couple of tail risks heading into the New Year. These developments capped a strong year for equities (at least outside Europe), which were supported by unprecedented levels of fiscal and monetary policy support following the pandemic. With vaccines holding out the promise of a better global economy in 2021 while that fiscal and monetary policy support remains in place indefinitely, the “risk-on” environment looks set to continue until something proves it wrong. 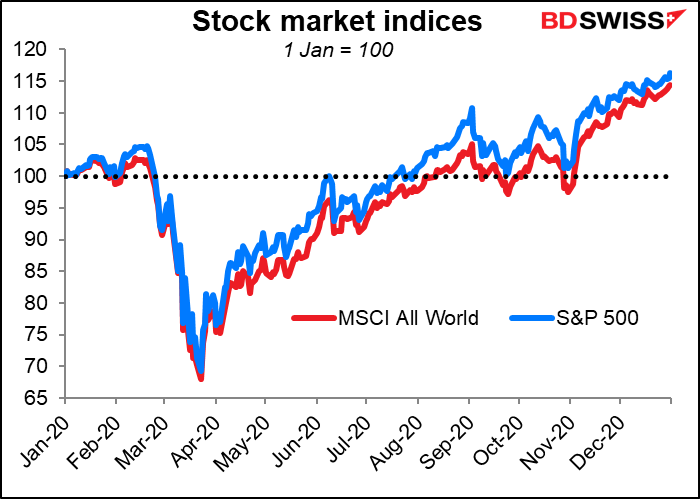 Meanwhile the reflation trade has also continued to gather pace, with US Treasury 10-year yields rising and 10-year breakeven inflation rate up to 1.99%, a level not seen in almost two years. 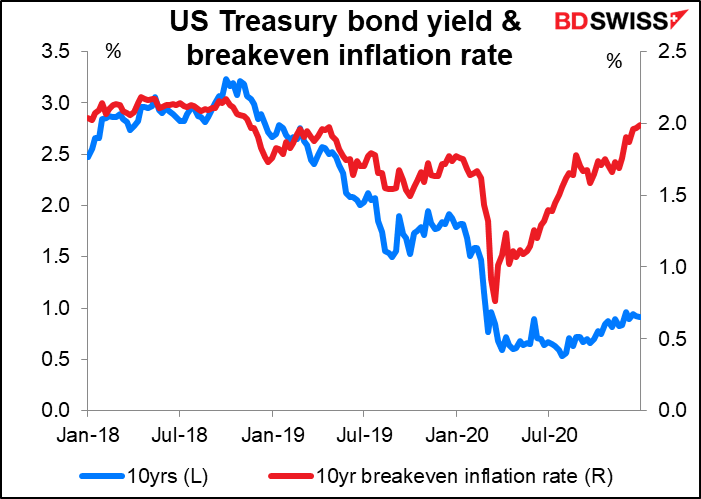 I’ve included two graphs of the movement of the market, one from the close of European trading on 31 December and one from the last time I did this comment, which was 23 December. In both cases, the big winner so far has been GBP (well, the big winner has been Bitcoin, but this comment is confined to fundamental analysis so I don’t follow Bitcoin).

Secondly, looking at both the GBP/USD and EUR/GBP risk reversals, although they’ve both become less extreme since before the agreement, they are both still poised for GBP weakness. In other words, the market isn’t at all convinced that this GBP rally will continue. 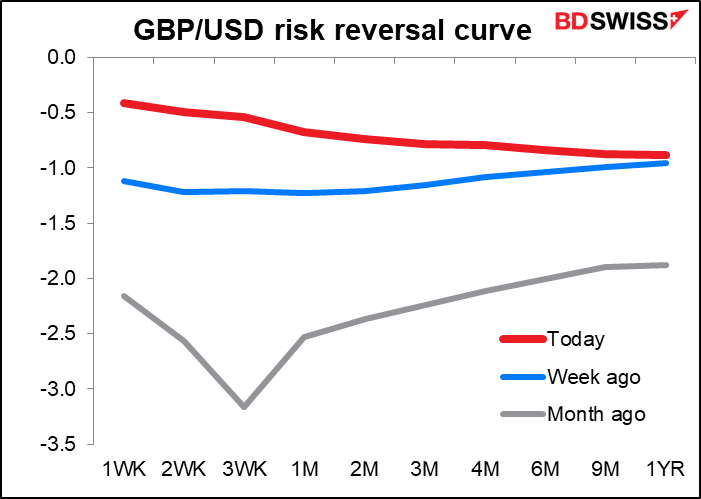 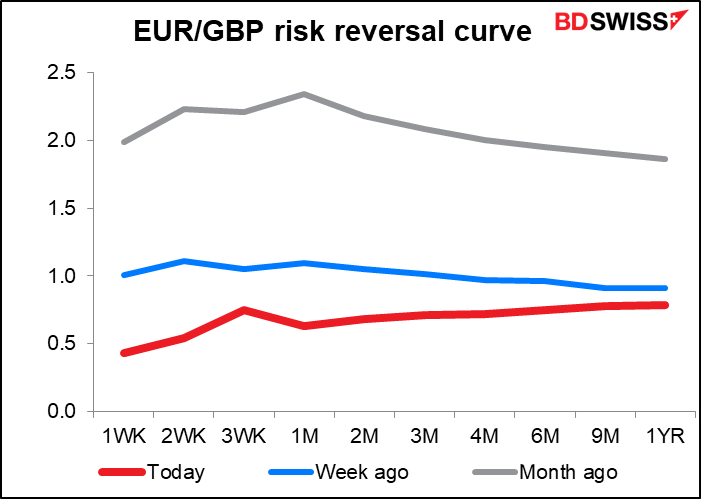 There are still a lot of potential “bumps in the road” for GBP. In the first place, the Brexit agreement runs to 1,500+ pages, plus various other appendices etc. Although it eliminates all tariffs and quotas between the UK and EU, there are still many non-tariff barriers. It’s not possible to figure out immediately all the ways in which this will impact the UK. For example, some people have been surprised to find out that it affects their ability to get goods from China. A company that imported goods from China into their warehouse in Poland for distribution around Europe now finds that it needs various customs documents to forward goods onto the UK, which delays shipment and adds to the price.

In the immediate future, the deal will probably be judged on the simple metric of how many trucks are backed up in Calais or Folkestone?

Meanwhile, negotiations will continue, particularly on services. A Memorandum of Understanding is expected by March on financial services, but even that won’t be binding. Negotiations on this crucial trade link are bound to affect GBP.

Gradually, the UK and EU will either move towards a more integrated “Norway” model or towards a more distant “Australia” (i.e. WTO) model. We’ll have to see which it is.

Meanwhile, the UK Is being hit particularly hard by the virus. UK PM Boorish Johnson Sunday warned that restrictions in England were “probably about to get tougher as the UK’s 7-day case average rose above 50k for the first time. Meanwhile, the government has seemingly abandoned the scientific evidence to allow a “mix-and-match” approach to vaccination: if a second dose of the vaccine a patient originally received isn’t available, or if the manufacturer of the first shot isn’t known, another vaccine may be substituted. This policy, which one American scientist characterized as “just trying to guess their way out of a mess,” may diminish market confidence in the UK’s vaccination program, which would be negative for GBP. May is shaping up to be a particularly rough month for GBP. That month marks the centenary of Irish partition. There are bound to be increasing calls for reunification of Ireland, especially as A) Northern Ireland voted “remain,” B) Catholics are now a majority in the North, and C) the conditions for an Irish border poll as set out in the Good Friday Agreement are already met. Furthermore, that month there will be local elections throughout the UK (6 May), including for the Scottish Parliament. A strong showing by the Scottish National Party (SNP), which seems likely, may renew calls for an independence referendum there.

Meanwhile,  Japan PM Suga held a New Year’s press conference at which he said he would consider declaring a limited state of emergency. NHK reported that the government is looking at a declaration this week covering Tokyo and the three surrounding prefectures. This comes as new one-day virus infections reached all-time highs of 1,337 people in Tokyo and 4,520 nationwide on 31 December. Of course this is nothing compared to many other countries, but the trend is certainly worrisome. The state of emergency is likely to hit growth, but probably nowhere nearly as badly as in Q2 of last year, because of the limited regional scope of the regulations and the likely shorter period. At the same time, the Japanese economy should be bolstered by an improving global recovery.

The new trading year starts with some old data – the final version of the December manufacturing purchasing managers’ indices (PMIs) for the major industrial countries that have preliminary versions, and the one-and-only version for other countries, such as Canada. These can be market affecting, but there are no forecasts.

The Institute of Supply Management (ISM) usually announces its manufacturing PMI 15 minutes after the final version of the Markit manufacturing PMI for the US comes out, but this time it’s coming out tomorrow.

Swiss sight deposits have fallen for five out of the last six weeks. I believe this is a seasonal pattern related to demand for cash during the Christmas shopping season and doesn’t represent any change in strategy on the part of the Swiss National Bank. Sight deposits fell the first week in January in 2020, 2019, 2018, and 2016, i.e. four out the last five years (I didn’t check back any further). That suggests to me that another fall this week wouldn’t necessarily indicate any change in policy either. 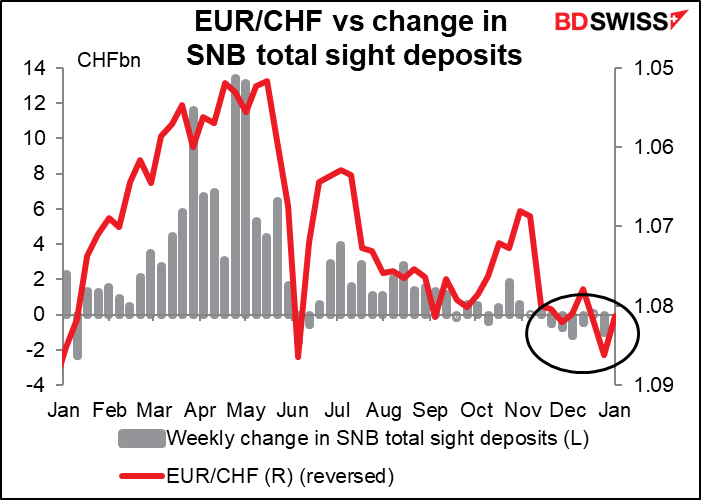 UK mortgage approvals are expected to fall back from the extraordinary levels of the last few months. That’s not particularly worrisome though. 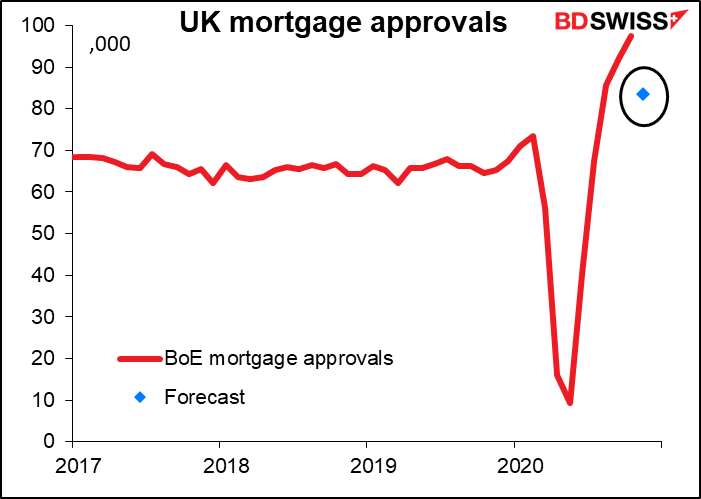 The surge simply represented pent-up demand that’s now largely satisfied. Approvals seem on target to end the year at about the same level as in the previous two years, which is nothing short of amazing IMHO when you consider all the uncertainty & job losses caused by Brexit and the pandemic. 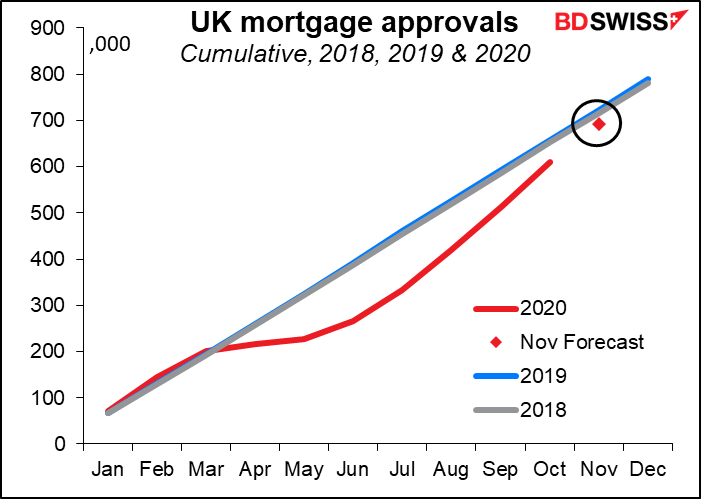 Later in the day, the American Economic Association (AEA) holds its annual get-together today and tomorrow. A number of Fed speakers will be speaking to the assembled masses or the massed assembly, whichever it may be.

Remember that the annual rotation of voters on the Federal Open Market Committee (FOMC) occurs on 1 January. That means today’s speakers have switched votes:  Chicago’s Evans and Atlanta’s Bostic are now voters and Cleveland’s Mester is no longer. The other changes:   Richmond’s Barkin and San Francisco’s Daly are the other two who will be voting this year, while Philadelphia’s Harker, Dallas’ Kaplan and Minneapolis’ Kashkari move to the sidelines. The changes make the panel modestly more dovish, in my view.

Of the regional Fed presidents losing the vote this time, Kashkari is probably the most dovish person on the whole FOMC, voting or non-voting, while Harker and Mester are two of the more hawkish members. Kaplan is a centrist. So two hawks and one dove lose the vote.

As for those gaining the vote this year, Barkin, Bostic and Daly are also centrists. On the other hand, Evans is known to be fairly dovish. Furthermore, there’s a new voter:  Gov. Christopher Waller, a Trump appointee for an empty seat. Waller is a former research director of the St. Louis Fed and was appointed in lieu of his protégé, St. Louis Fed President Bullard, who turned down the opportunity. I would say he’s likely to take the place of Kashkari as the most dovish voting FOMC member. (Ratings are taken from the Reuters Doves and Hawks graphic.) That means two doves join, for a net gain of one dove and loss of two hawks. Hence I see the FOMC shifting slightly to the left. 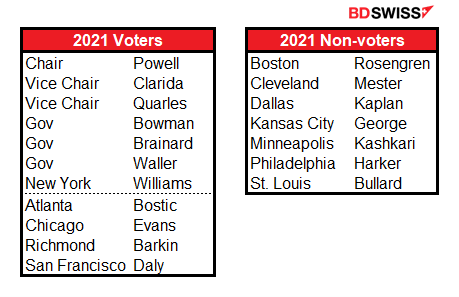 Then tomorrow morning, as the sun gradually rises over Mount Blanc, Switzerland announces its consumer price index (CPI). It’s expected to show worsening deflation in the country. Personally, having lived in Switzerland, I say deflation is exactly what the country needs – prices are preternaturally high there. (Actually, it’s probably more accurate to say that the exchange rate is ridiculously overvalued – if $1 = 2 CHF, everything would seem a lot more normal. But really – CHF 25 ($28) per person for pizza? Who are they kidding? Half that would still be high. (In 2017, the price of a plain pizza in the US ranged from $7.25 to $15, according to Datafiniti.) 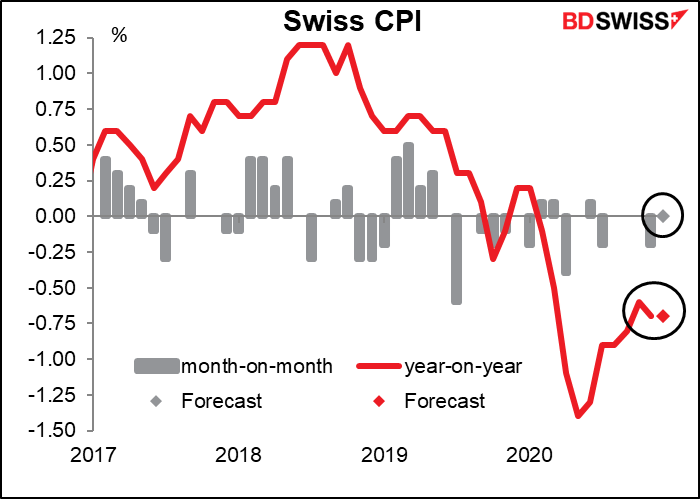 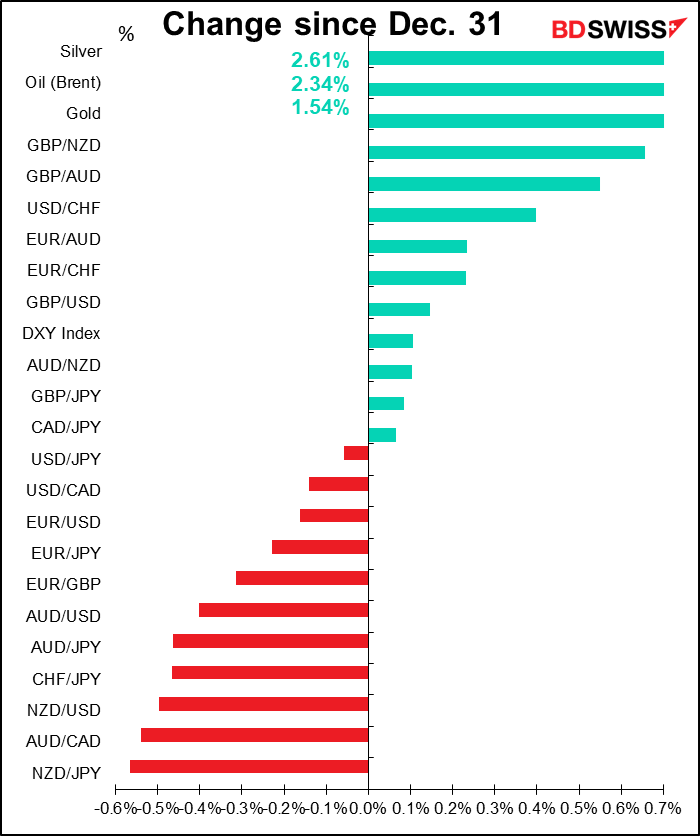 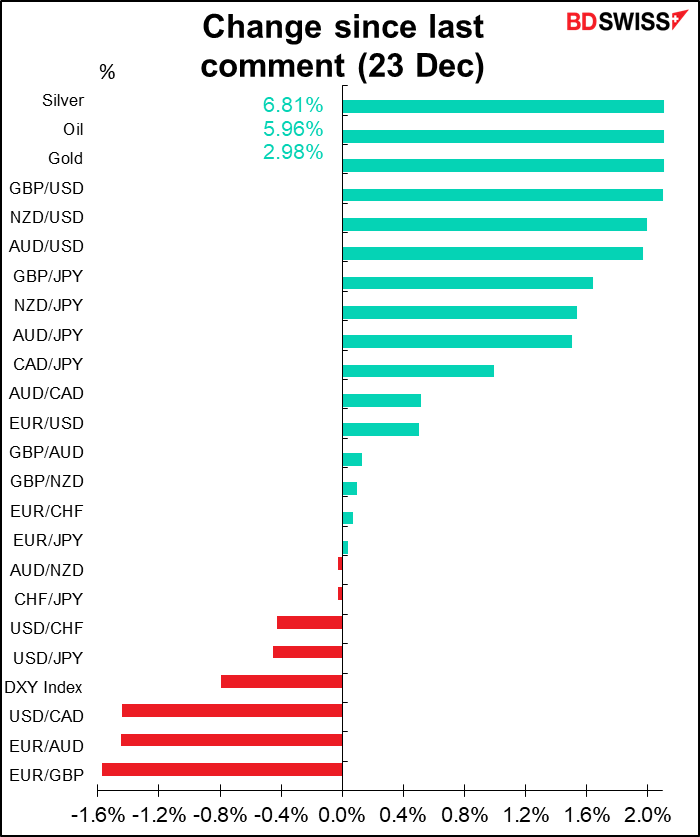