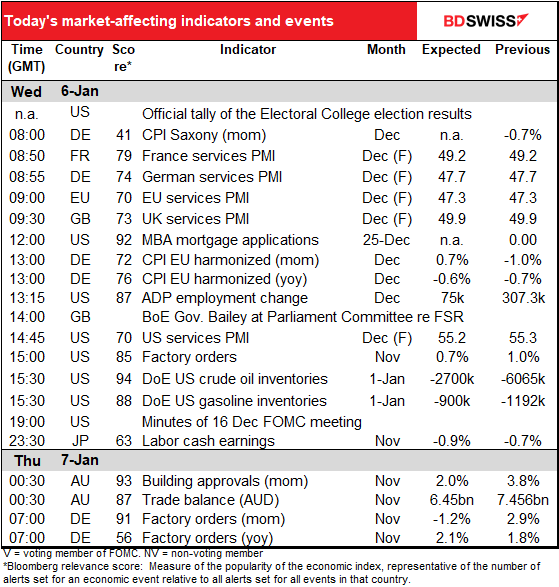 Saudi Arabia stunned the markets by unilaterally announcing a 1mn barrel a day (b/d) cut in production for February and March. The move came after OPEC+ agreed in its monthly meeting to reduce its production cuts (if that makes sense) to 7.125mn b/d in February and March vs 7.2mn b/d in January (in other words, to increase production by 75k b/d, of which Russia will take 65k b/d and Kazakhstan 10k b/d). The Saudi move is a return to the Kingdom’s historical role as the “swing producer” in OPEC, adjusting its production to balance fluctuations in supply and demand. That’s not good news for Saudi Arabia, because previously, Saudi Arabia and Russia were moving in parallel. The fact that Saudi Arabia is cutting roughly 9% of its production while Russia is expanding its output means that Russia won.

OPEC+ politics aside, the Saudi move had the desired effect, with oil prices surging even though the American Petroleum Institute (API) announced an unexpectedly huge increase in product inventories in the most recent week (see below). The move engendered a general “risk-on” mood with the commodity currencies up and USD headed lower.

AUD and CAD tracked each other closely. It’s surprising to me though that AUD gained more than CAD, since A) CAD had fallen sharply Monday on lower oil prices, and B) the rally was due to a rise in oil prices, not coal prices. (USD fell 0.85% vs AUD but only 0.68% vs CAD.) I would’ve expected CAD to bounce back further than AUD, i.e. for AUD/CAD to decline. But it didn’t.

US Politics: end of the election

The counting in the Georgia Senate races isn’t finished yet, but it looks like both Democratic candidates will win. The results have flipped even in the hour or two that I’ve been writing this – when I started, the loathsome David Perdue (R) was ahead of the outstanding Jon Ossoff (D), but now Our Hero is winning by 9,527 votes. (Full disclosure: I donated to Ossoff’s campaign.) Raphael Warnock (D) has been consistently ahead of the appalling Kelly Loeffler (R) and looks to have won by over 46,000 votes. (And to his, too.)

With the results this close, final results might not be available until Friday. More than 40,000 military and overseas voters received ballots, but only around 10,000 have arrived back in Georgia so far. These ballots will be counted as long as they arrive by Friday. Given how close the voting is, they could tip the results.

To recap, the Democrats need to win both seats to gain control of the Senate, while the Republicans only need to win one to maintain control. The results will determine whether the Biden administration can get its agenda through Congress or not. A win by both Democrats would be a big “risk-on” development as it would presage greater fiscal support for the economy than the market is currently assuming.

Would that be good or bad for the dollar? “Risk-on” generally means a weaker dollar, while “more fiscal support” would mean “less need for monetary support” and hence less need for zero rates and permanent Quantitative Easing. I think in the current situation it would mean a weaker dollar because the Fed is in no mood to hike rates any time soon – they’ve changed to average inflation targeting (AIT), meaning they’re happy to tolerate an overshoot of their inflation target. EG yesterday Chicago Fed President Evans, admittedly a long-standing dove and now a non-voter, said it would “not be so bad” if inflation hit 3%. I think they’ve switched to targeting unemployment rather than inflation, and it will take a long time before US unemployment gets back to where it was. Meanwhile, higher inflation and steady low yields = lower real yields = a weaker dollar.

Then we finally have the last gasp of the US presidential election. Vice President Pence will open the envelopes from the various states’ Electoral Colleges, tally the votes and announce the winner (spoiler alert:  not him!) Usually this is just a pro-forma ceremony that passes without notice – indeed, normally not many people even show up for it — but this year many Republicans have said they’re going to exercise their Constitutional rights to object to the votes. If someone from both the House of Representatives and the Senate object to a state’s electors, Congress has to adjourn for two hours to debate the subject before coming back for a vote. This has only happened twice before, in 1969 and 2005.

This meaningless move should have no effect except to delay the proceedings because both Houses of Congress have to agree to reject a state’s electors and of course the Democrat-controlled House of Representatives will never do any such thing. Even many Republicans will vote against this ridiculous stalling attempt.  But it does suggest two ways in which a Republican Congress could carry out a coup.

The easy way:  if they controlled both Houses, then they might be able to reject the electors, although that would be outrageous (but not unthinkable, alas).

The hard way, which they might try this time, is to delay and delay. According to The New Yorker magazine:

If Republicans were to attempt to drag out the January 6th joint session by objecting to individual states’ electoral votes one by one, and thereby triggering the two houses’ separate, hours-long debates on each of them, then it is possible, though unlikely, that the business of counting the votes wouldn’t be concluded in five days, at which point the Electoral Count Act says that the recesses for debating objections to votes must end.

At that point, the electoral votes that have been officially counted for Biden might not yet have reached the threshold of two hundred and seventy votes. At such a juncture, it is possible that some Republicans might attempt a maneuver to abuse the process provided in federal law, by insisting on reverting to the Twelfth Amendment’s provision that, if no candidate has a majority of electoral votes, “the House of Representatives shall choose immediately, by ballot, the President.” This amendment says that, in the House, “the votes shall be taken by states, the representation from each state having one vote”—that is, each state casts its vote as a delegation. That could well result in Trump’s reёlection, because there are more Republican than Democratic state delegations in the House, even though Democrats have a majority of representatives there

This is highly unlikely, especially as not all Republicans are on board with the effort to begin with. But just because they fail this time doesn’t mean they won’t try again next time.

As for the indicators, today we get the final service-sector purchasing managers’ indices (PMIs) for those countries that have preliminary versions and the one-and-only versions for other countries. 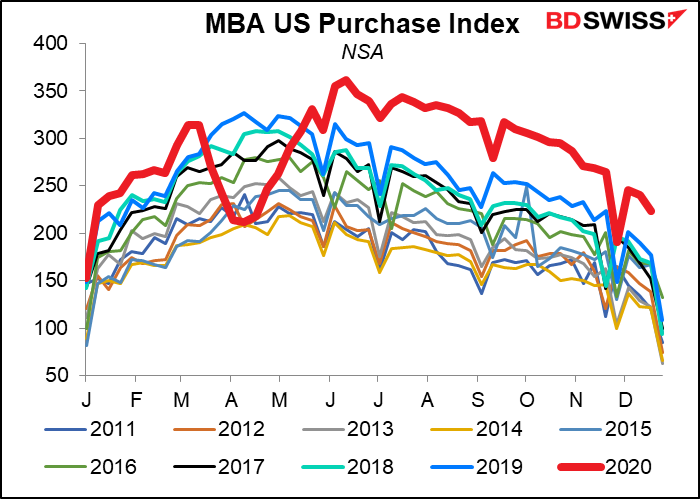 German consumer prices are expected to jump a bit in December, pushing the annual inflation rate – or more accurately the deflation rate – up a bit, but not significantly – it’s still deflation. Nonetheless I think with the European Central Bank (ECB) having just loosened policy last month, this figure will have little impact on the market. 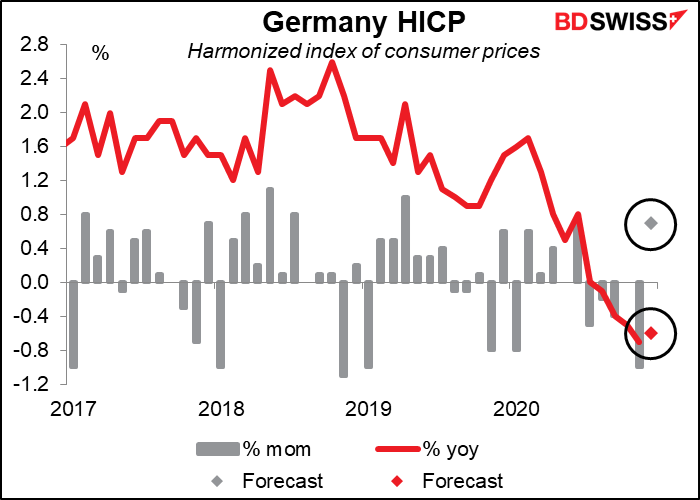 Now we get the main indicator of the day: the ADP employment report. Automated Data Processing Inc. (ADP) is an outsourcing company that handles about one-fifth of the private payrolls in the US, so its client base is a pretty sizeable sample of the US labor market as a whole. It’s therefore watched closely to get an idea of what Friday’s US nonfarm payrolls (NFP) figure might be. One point to note:  the ADP adjusts its figures to match the final estimate of NFP, not the initial estimate that we get this Friday. So while it’s one of the best guides to the NFP that we have, it’s not perfect by any means – in fact, neither is the NFP figure itself, since it’s always revised.

The ADP report is looking for a pretty miserable 50k rise in jobs (the same as the consensus forecast for the nonfarm payrolls, at this point). 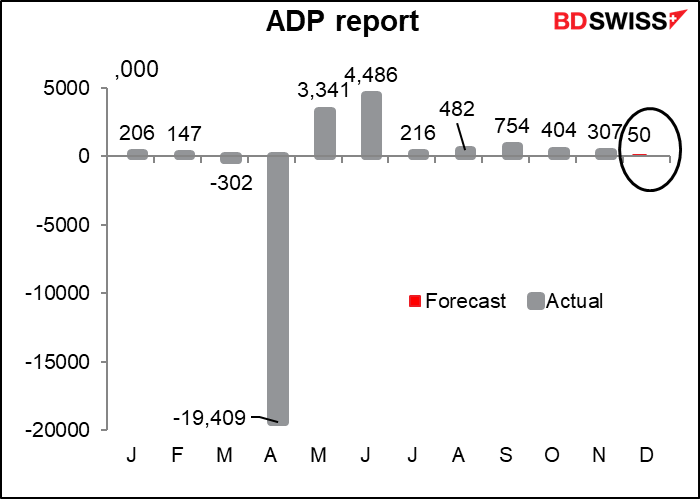 Given that initial jobless claims rose from early November to early December, even that small increase might be optimistic. Jobless claims became increasingly correlated with the growth in Covid-19 cases during this time as several hard-hit states implemented lockdown measures and other restrictions on businesses. 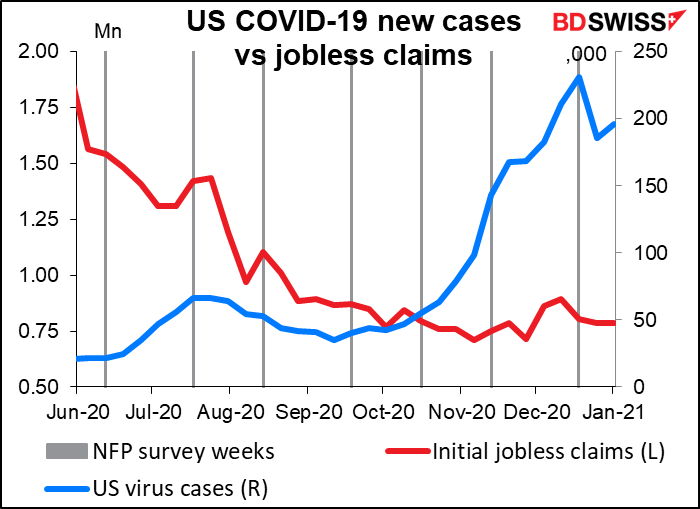 The ADP has gotten better at forecasting the NFP recently. Earlier this year there were huge errors of 1mn or more in several months. 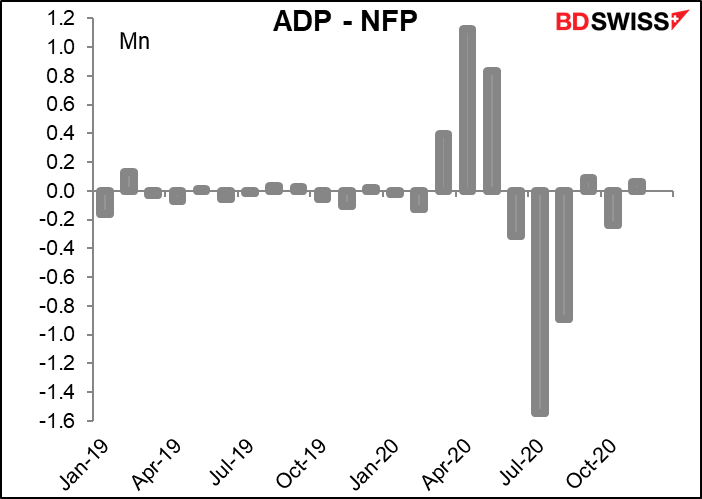 Of course that may also have something to do with the fact that the overall numbers are coming down. Looked at as a percentage of the NFP number, the ADP report is still missing by a lot – although this is nothing new. 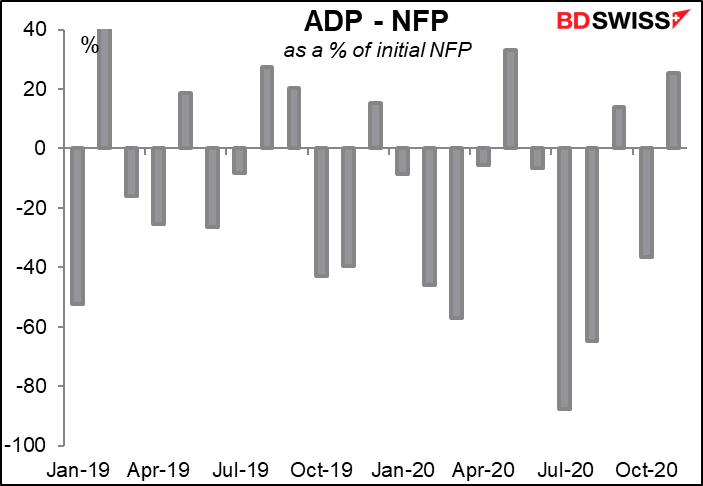 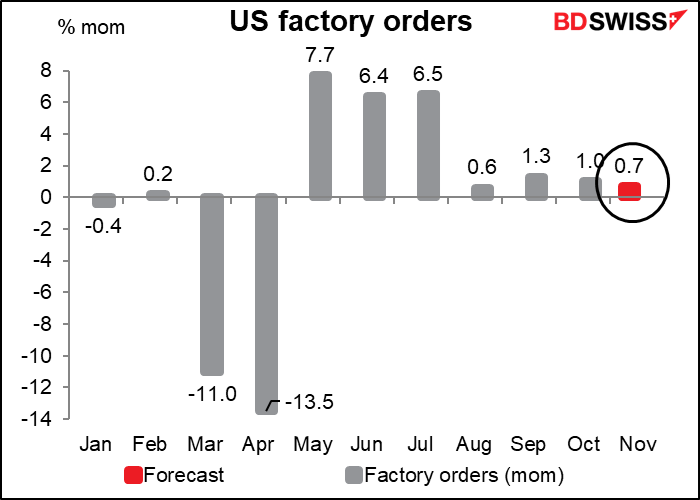 US crude oil inventories are forecast to start the year with a drawdown. The market was expecting a draw of 2700k barrels, which is pretty close to the 1663k drawdown that the American Petroleum Institute (API) reported overnight. But the key points in the API report were the large increases in inventories of petroleum products:  gasoline inventories jumped by 5.473 million barrels, vs expectations of a 900k decline, and distillate inventories soared by 7.136 million barrels. 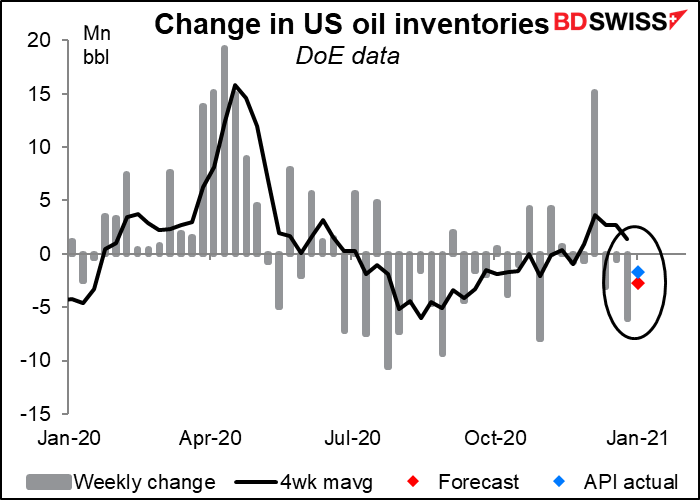 Probably the most important event on today’s schedule is the release of the minutes of the 16 December Federal Open Market Committee (FOMC) meeting. The key development at that meeting was the inclusion of more detailed forward guidance for the Fed’s asset purchases. The Committee promised to continue buying bonds at least at the current pace until “substantial further progress” was made towards its dual goals of price stability and full employment.

The problem is, no one really knows what constitutes “substantial progress.” At the press conference my old pal Rich Miller of Bloomberg News asked Fed Chair Powell whether the forecasts given in the Summary of Economic Projections (SEP) would constitute “substantial progress.” Powell simply waffled. “We’re not going to be associating that test with specific numbers at this point,” he said. ”So ‘substantial further progress’ means what it says. It means we’ll be looking for employment to be substantially closer to assessments of its maximum level and inflation to be substantially closer to our 2% longer-run goal before we start making adjustments to our purchases.” Well, that clears up everything, doesn’t it!

Against that vague background, the minutes may at least reveal the range of views that Committee members hold about the possible timing and method for tapering down the asset purchases. The minutes could also shed some light on what economic conditions could induce the Committee to adjust the size and duration of purchases, e.g. a cut in the amount and extension of duration a la Canada.

Then overnight there are a couple of important Australian economic indicators.

Australian building approvals are expected to be up 1.8% mom, which just so happens to be the six-month moving average of the month-on-month changes. That would show a steady improvement from earlier in the year, when the rate was declining. 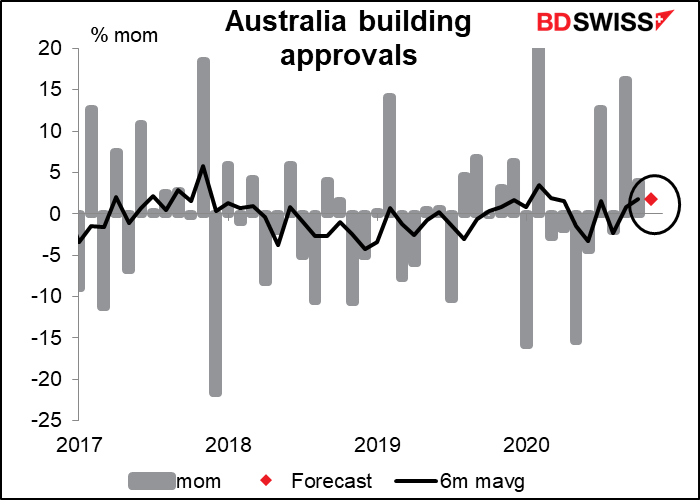 Meanwhile the Australian trade surplus is expected to fall somewhat as exports are expected to be down and imports up. This may well be the pattern for a few months as the Australian economy recovers but trade friction with China increases.

I think the market is putting more emphasis on domestic economic conditions, which makes me think that the decent building approvals data is more important than the decline in the trade surplus, which after all is still expected to be a surplus. I’d say that the combination is likely to prove neutral to positive for AUD. 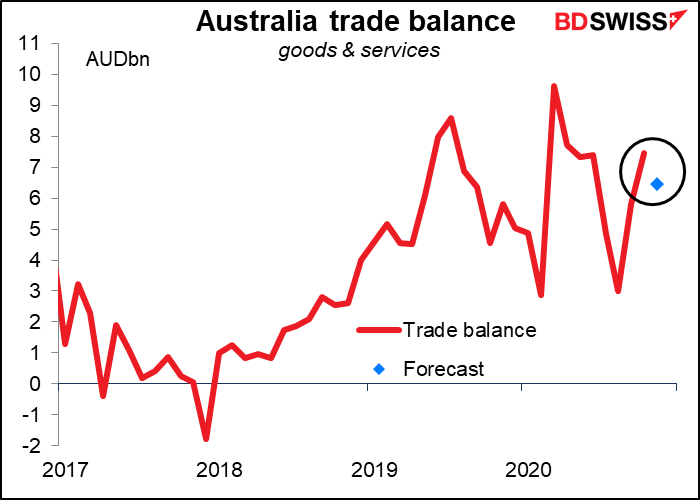 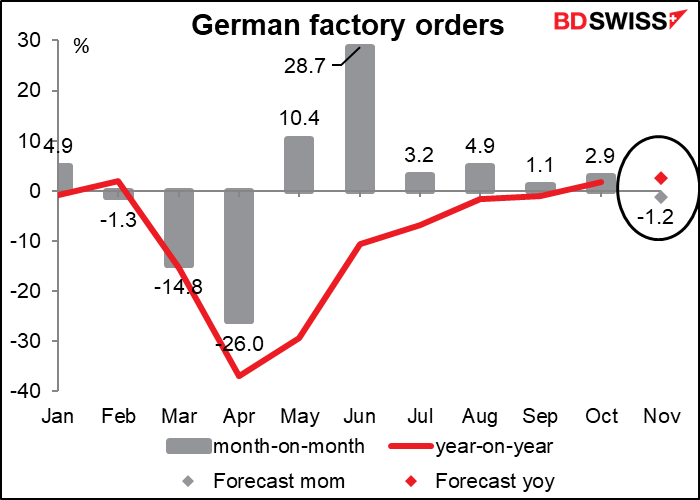 Domestic orders have bounced back above year-earlier levels, but overseas orders haven’t yet. Perhaps the recently signed EU-China Comprehensive Agreement on Investment will help to boost foreign orders in coming months, especially in contrast to the relatively confrontational approach of the US. 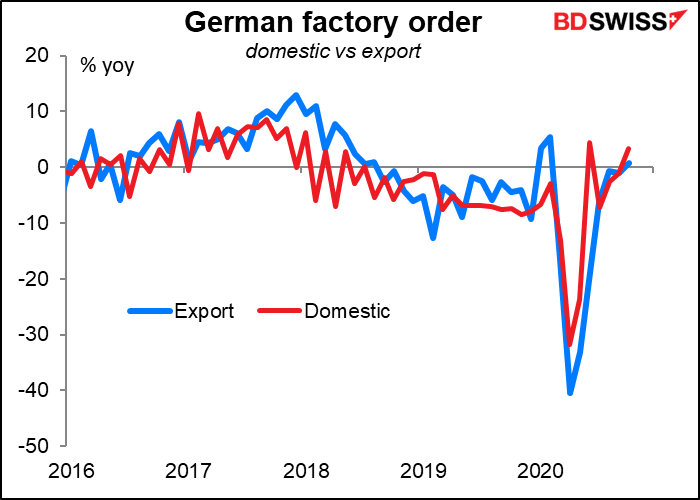 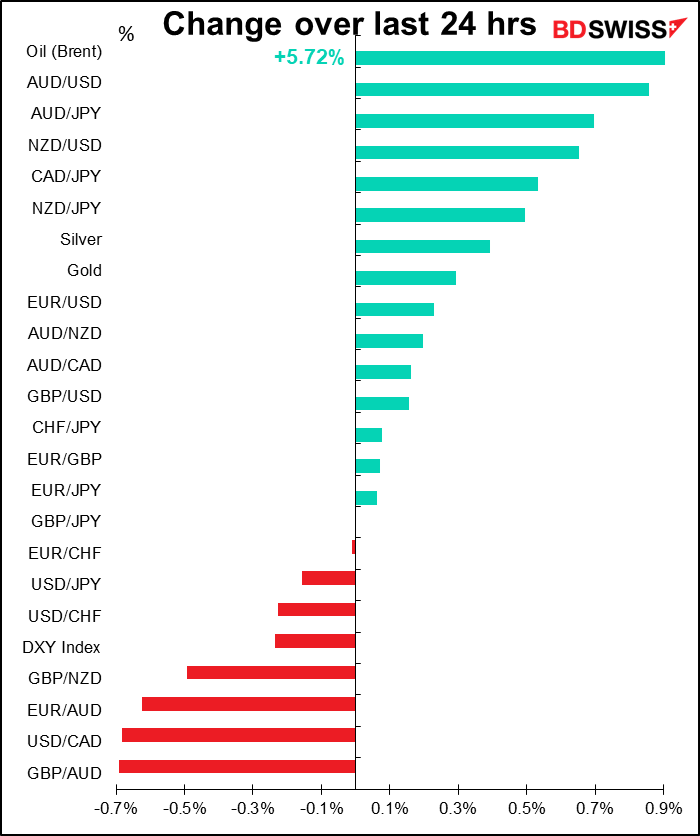