You are at:Home»MARKET PREVIEW»GBP Down in Calm FX Market; US Existing Home sales, Preliminary PMIs 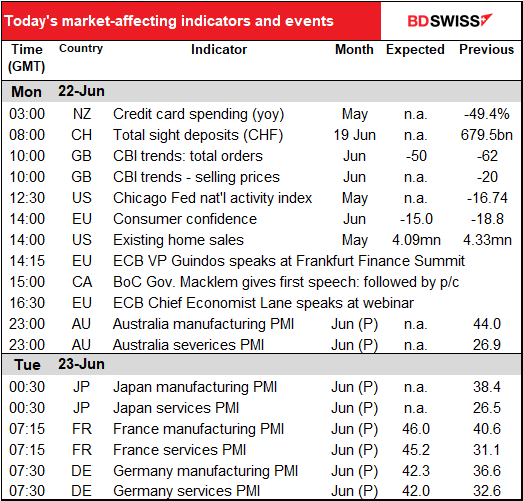 Friday was supposed to be a huge, volatile day in the markets – a “quadruple witching hour,” with futures and options contracts expiring. In the event the day was fairly routine in the stock market and a non-event for the FX market as most currency pairs remained in a ±0.2% range, with the exception of GBP.

There wasn’t anything in particular about the pound out on Friday, just general pessimism surrounding the currency. Despite an initial bump after Thursday’s Bank of England meeting announcement, the currency encountered significant selling after the meeting, probably on the rationale that the monetary support for the economy was going to be less than in other countries as the Bank slowed down its bond purchases. This comes against the background of continued disappointment in the Brexit negotiations, which have gone nowhere so far. Thursday the European Parliament passed a resolution reaffirming the EU’s existing stance and rejecting the compromises that Britain is seeking. Immovable object (EU) meets irresistible force (Johnson). In this case I think the irresistible force loses and Johnson will eventually cave, which may pave the way for his ejection from his post and yet another Conservative Party election, but that’s some time down the road.

Elsewhere in the world of FX economics, the short-term story on consumption seems to be encouraging, but the long-term outlook suggests trouble.

On the one hand, there are signs that retail demand is bouncing back as stores reopen and hitherto restrained citizens can finally give full expression to their visceral drive to go shopping. The CEO of US department store chain Macy’s said sales at reopened stores are down by about half compared with before the pandemic, which is better than the 85% decline the company expected. The CEO of Kohl’s Corp., another US retailer, said stores are doing about three-quarters of their pre-pandemic sales volume, up from about two-thirds in late May. So far, so good.

On the other hand, Inditex, the parent company of trendy clothes retailers Zara, said it would permanently close as many as 1,200 Zara stores, or 16% of its total outlets. In their place it will emphasize online sales, which have done well during the pandemic. This could be symptomatic of a general trend in the industry away from brick-and-mortar stores, which would have – indeed is having – a disastrous effect not only on employment but on real estate values and hence bank profitability as well. Investment bank UBS estimates that roughly 100,000 retail stores could close in the US over the next five years as e-commerce increases to a quarter of US retail sales from 15% last year. (Even last year I was shocked when I went to New York and saw how many storefronts were empty.) Similarly, Starbucks said it would close up to 400 of its North American stores over the next 18 months and open around 300 new locations focused on carryout and pickup. Either way, it spells less employment in retail, as these workers can’t all be retrained into website designers. The retail trade employs around 12% of the private sector workforces in the US, not to mention all the real estate involved. Such reports would justify these central banks’ concerns about the long-term outlook for employment.
We’ll learn more about what’s happening with consumption right now on Friday, when the personal income & spending data for the US is released.

The CoT report shows once again a continued move out of USD and into currencies.
Speculators’ positioning in the DXY index flipped from long to short for the first time since May 2018! The previous times when specs were net negative in the DXY were mostly – but not exclusively — when the DXY was significantly lower. 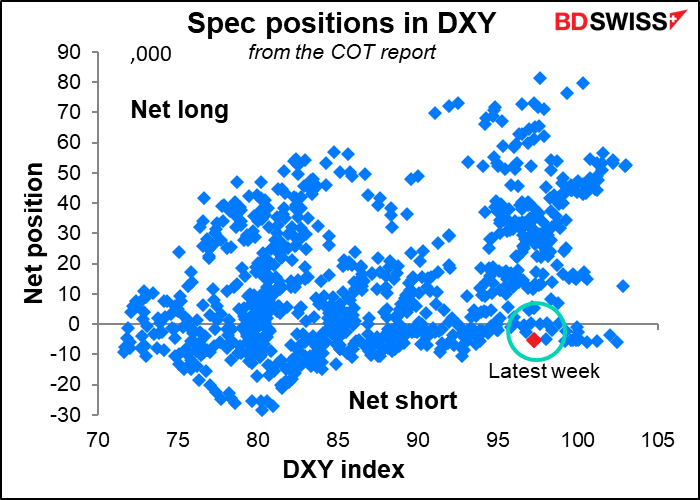 Elsewhere, the contribution to the increase in net USD shorts came mostly from an increase in EUR longs and a sharp decrease in AUD shorts.

MXN looks like a huge move, but that’s just because specs switched from a small short (-846 contracts) to a moderate-size long (22,106 contracts). Following Trump’s terrific rally Saturday in Tulsa, Oklahoma, with the biggest crowd anyone’s ever seen, it was so huge, it was amazing…I’m going to start the “Oklahoma COVID-19 Watch.” I want to see if COVID-19 picks up in the state. Admittedly that huge, amazing audience wasn’t the 1mn people who they claim had gotten tickets, but it still might have been a “super-spreader” event. So let’s see how it goes. 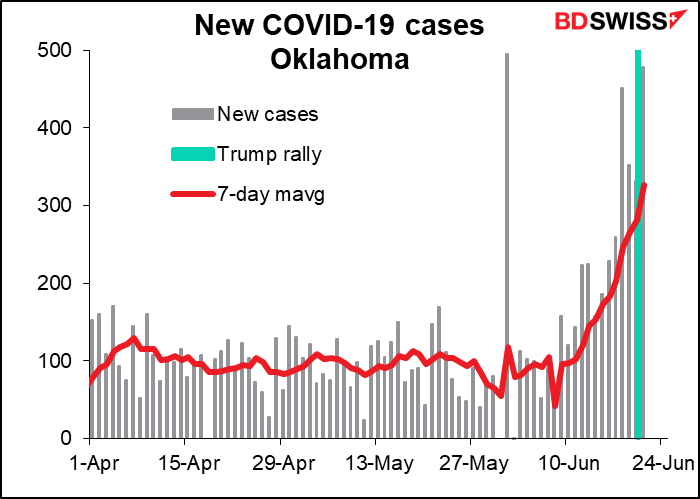 The virus had a good head start – it’s already gone exponential, as you can tell from the straight line in the logarithmic scale chart. 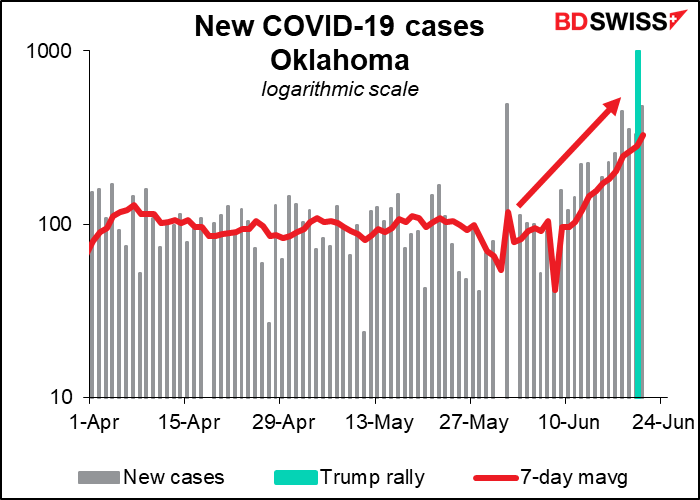 Swiss sight deposits have fallen over the last two weeks even as EUR/CHF has fallen. This would support the idea that the Swiss National Bank’s “line in the sand” is 1.05. If today’s figure shows that they did in fact resume intervention, we’ll have to reconsider. 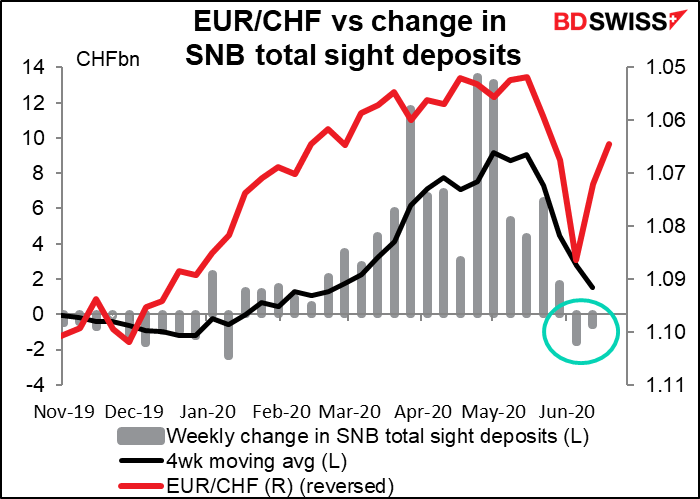 The Confederation of British Industry (CBI) industrial trends survey is expected to show a small rise in the “total orders” diffusion index for June, but it’s expected to remain heavily negative. This indicator suggests May was the bottom for Britain but the recovery is slow. No consensus forecast for “selling price.” 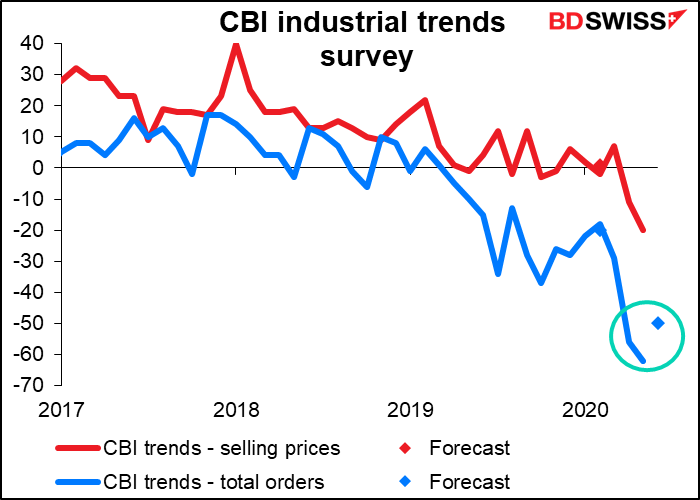 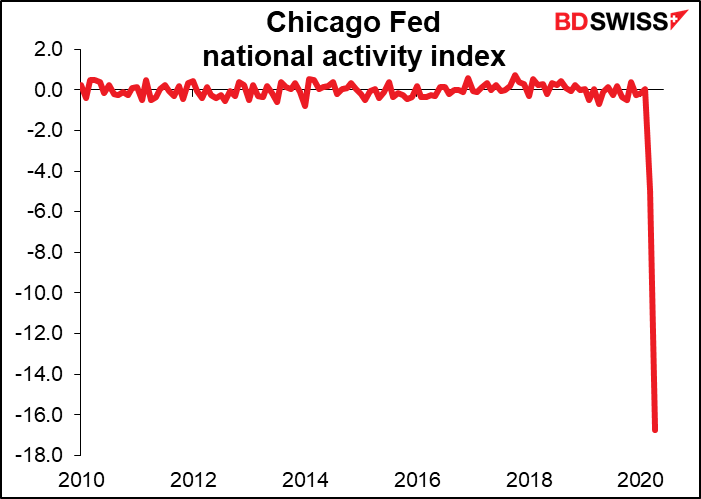 Based on the rather sketchy relationship with the other Fed indices, I’d guess it will rebound to somewhere around -6, but I wouldn’t want to bet on it. 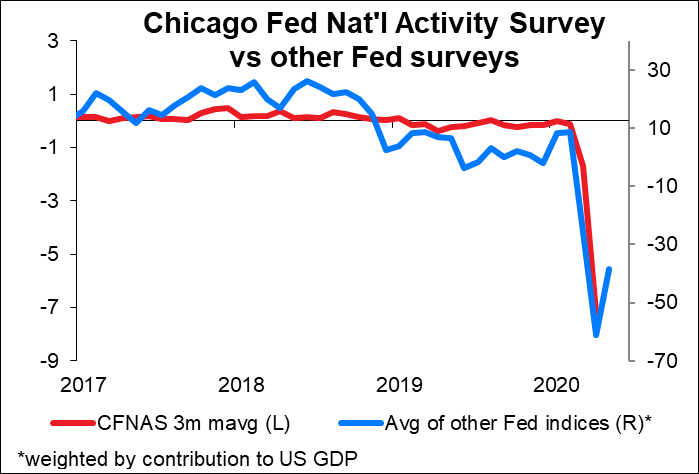 EU consumer confidence is expected to continue recovering. A significant rise is forecast, but not even back only to the levels following the 2008/09 Global Financial Crisis, when it looked like the Eurozone was going to fall apart, so we can hardly say that people are more confident – maybe only less worried. 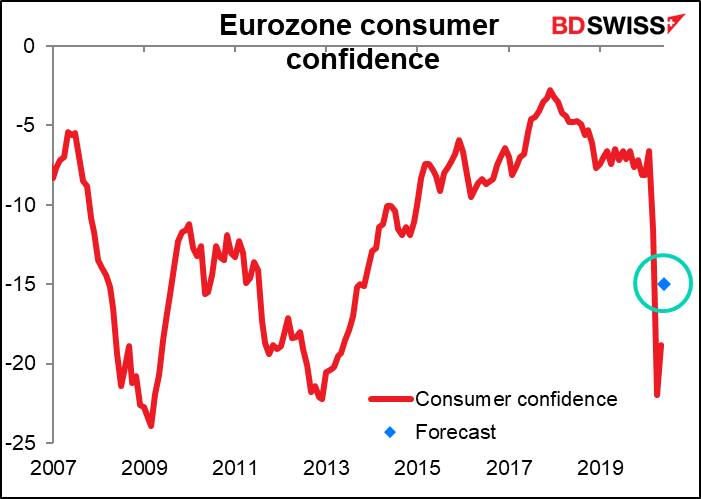 Today’s US existing home sales figure is expected to be down 5.6% mom, but tomorrows’ new home sales are expected to be up 1.9%. It’s not unusual at all for the two to move in opposite directions – on the contrary, it happens a little bit over half the time. I’ll discuss tomorrow why it might be happening now. 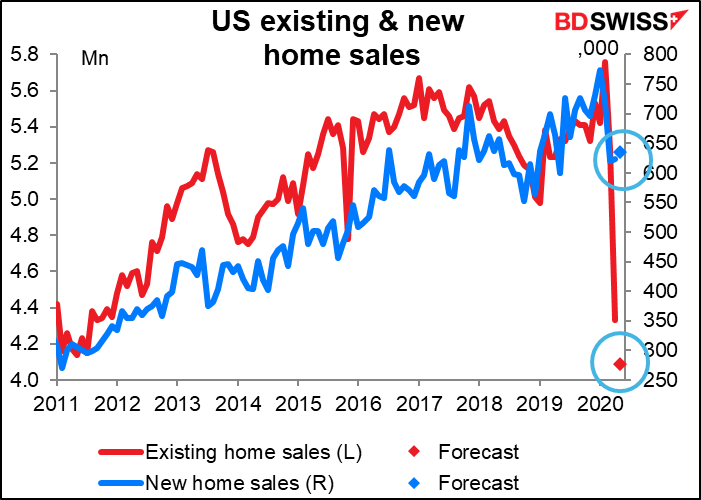 Overnight we get the start on the preliminary purchasing managers’ indices (PMIs) for the major industrial economies. There are no forecasts for the Australia or Japan versions, and no one seems to care much about them. I’ve never looked into why this is for Australia, but I know that in the case of Japan, the PMIs aren’t a very reliable indicator of Japanese GDP. Furthermore, there are other indicators that track the economy more reliably: the monthly industrial production figures include a forecast for the next month, while the Eco Watcher’s Survey gives a better picture of the service sector. So while these may attract some interest, they’re not market-affecting enough to warrant brokerage economists making forecasts.

Tune in tomorrow morning though for the European ones, which are very important! That’s why I’ve included them in today’s table. 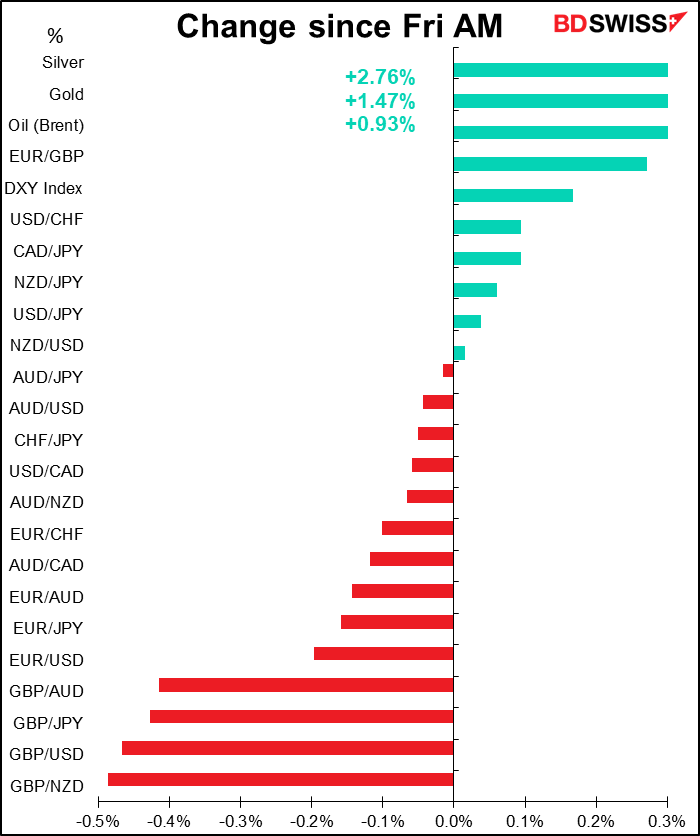