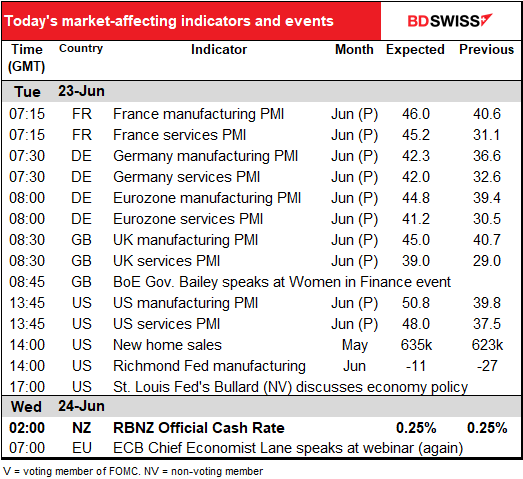 We’re back to China trade as a main mover today. First White House trade adviser Navarro said something about “it’s over” when talking about the US-China trade deal. Stocks plunged and FX went into a “risk-off” mood. Then he said his comments were “taken wildly out of context” and Trump confirmed the trade deal is fully intact, so suddenly everyone was happy again and it was “risk-on.”
As usual with “risk-on,” JPY, USD and CHF were lower while AUD, NZD and CAD were higher.

The only question is, where were EUR and GBP? EUR would normally be up if USD is down, and indeed it is. GBP too. EUR/GBP was down a little bit, i.e. GBP gained slightly on EUR. PM Johnson is expected to announce today the next stage in lifting the lockdown – movie theaters and museums should be able to operate from 4 July.
Meanwhile the virus continues to surge worldwide, with the total number of cases hitting a record 9mn. But the market is focusing on stimulus efforts and the progress of the recovery more than the progress of the virus today. 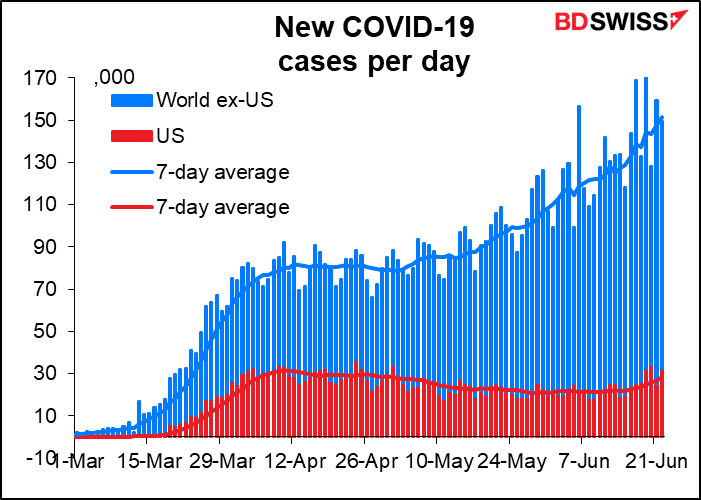 In that respect, it was significant that Trump backed the idea of including a second stimulus check in the next coronavirus aid package. (Disclaimer: As a US taxpayer, I received my own stimulus check yesterday! It was for $11.55. I was not very stimulated.) The second check is important because one of the big issues is how to handle the “benefits cliff” that will occur at the end of July if the extra $600 a week in Federal unemployment benefits aren’t extended. That would mean around 24mn people losing half or more of their monthly income – a disaster. Republicans initially didn’t support additional checks (don’t get me started on why), so Trump’s support for this idea is a Big Deal as the two parties debate the details of the next package. I guess even Trump can’t do everything wrong.
It’s positive for the US economy and therefore should in theory be positive USD, although as we note today that “risk-on” generally means a lower USD. Trump’s support for this could sustain the risk-on rally today, to the benefit of the commodity currencies and the detriment of the US.

The big thing today is the preliminary purchasing managers’ indices (PMIs) for the major industrial economies. Although usually the manufacturing PMIs are the more important, nowadays it’s the service sector that’s under pressure and so everyone is waiting to see how the service sector recovers.

The forecasts have changed since I did my weekly last Friday. They now stand as follows. (Note that the forecast figures for Japan are the actual figures – Japan’s manufacturing PMI surprisingly fell, while its service-sector PMI roared ahead.) 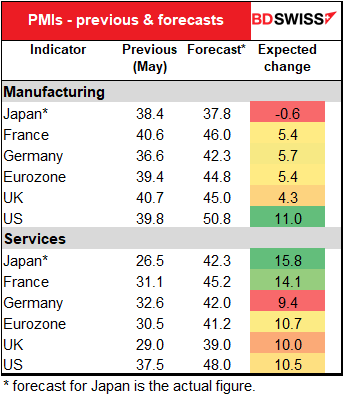 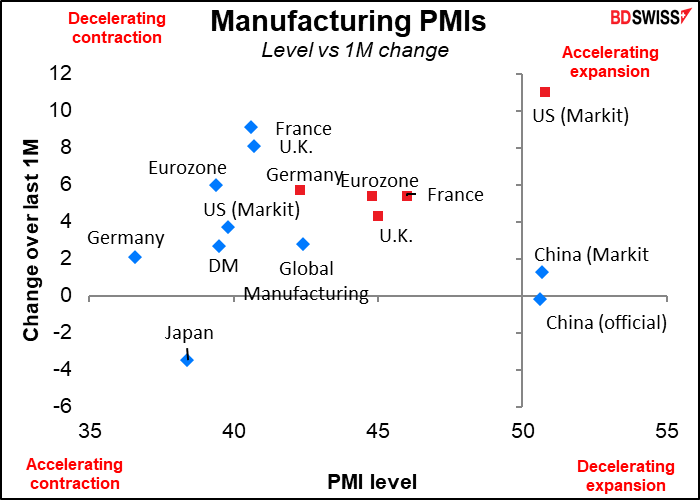 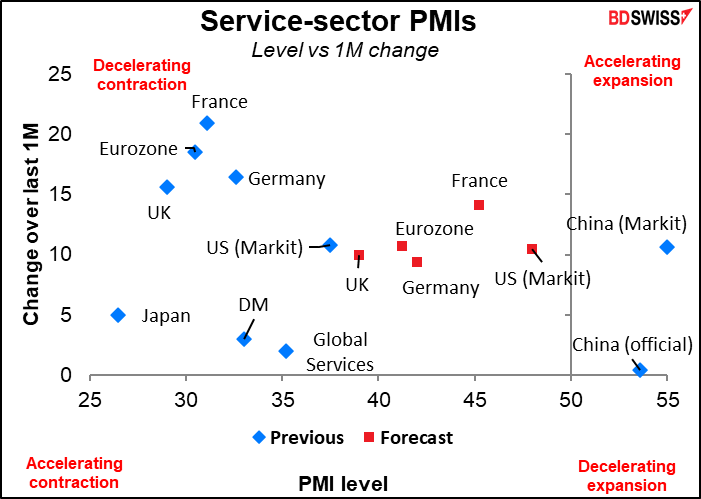 I have to say, I question whether the service sector will rebound so much more in France than in Germany (14.1 points vs 9.4 points). Signs are that Germany has been ahead of France. 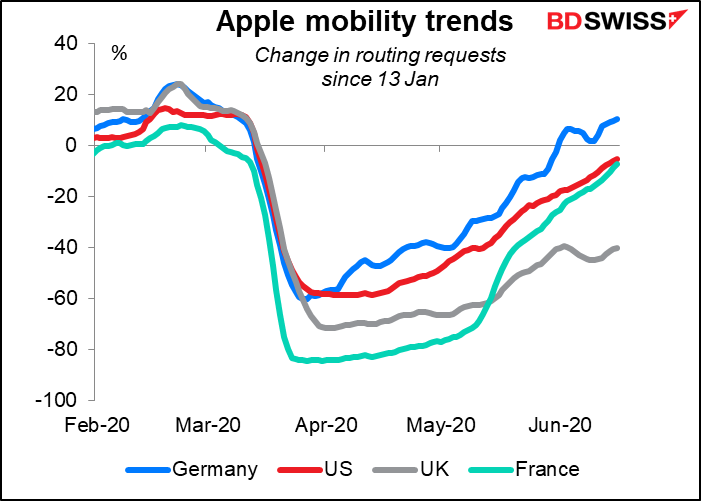 On the other hand, German consumer confidence suffered a bigger fall than French consumer confidence did, as it was higher to begin with and fell to almost the same point as French confidence did (-16.3 vs -19.0). So it’s possible that the French PMI – which reflects the change in sentiment, not the absolute level of sentiment – could indeed rebound more than the German.
Does it matter? It’s been 21 years since anyone traded DEM/FRF anyway. I suppose I’m just curious. 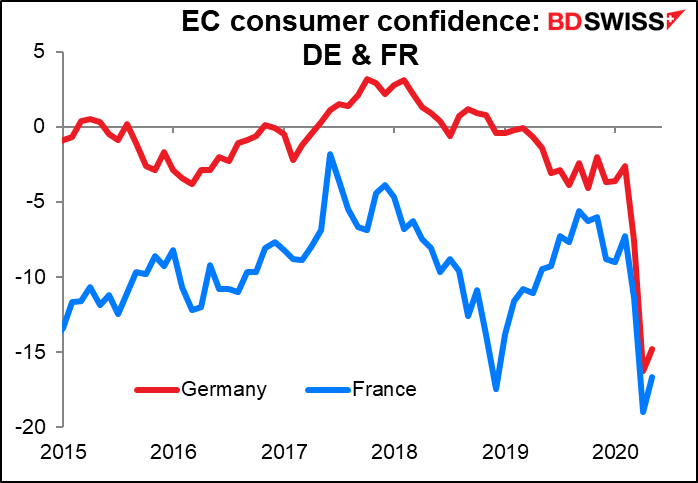 The forecasts do assume a smaller rise in the UK service-sector index than in the Eurozone, which is entirely plausible to me, looking at the relative rebound in indications of activity.
For the US service-sector index, the market is looking for a similar rise in point terms to what’s expected for the EU, however given the much higher US PMI for the previous month (37.5 vs 30.5) that of course means a higher PMI for this month, too.
The US manufacturing PMI forecast is the big outlier of the day. While the others are expected to rise 4.3-5.7 points and remain from 42.3 to 46.0, the US manufacturing PMI is forecast to vault 11 points to 50.8, poking its nose over the 50 “boom or bust” line to show not just less of a slowdown but actual expansion! (I can only say, Congratulations!)
This would go along with the fact that recent US economic indicators have generally been better than expected, lending some credence to the idea that the US economy may be recovering faster than people had expected. 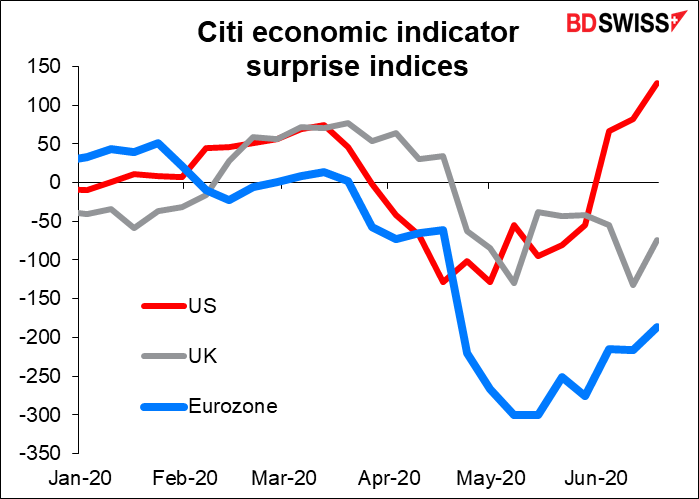 Outside of the PMIs, the only other indicator on the schedule is US new home sales. They’re expected to be up in May, as opposed to the greater-than-expected -9.7% mom fall we saw from yesterday’s existing home sales.
As I mentioned yesterday, the two move in the same direction only about half the time, and there’s no connection between the rate of change in one and the rate of change in the other, at least not on a month-to-month basis. 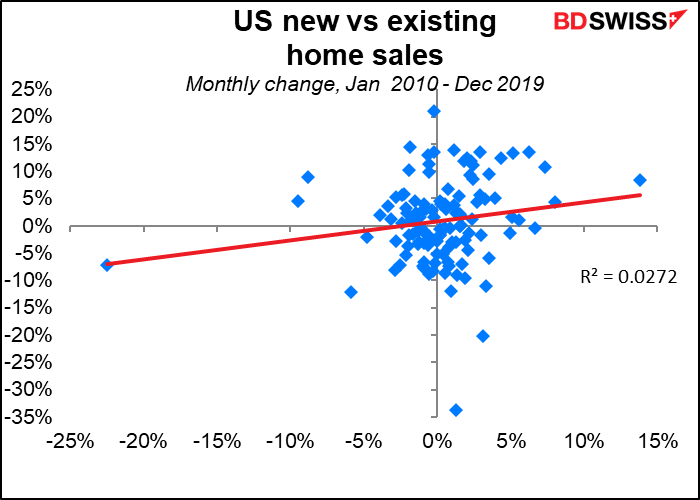 Over time though the differences tend to average out somewhat. 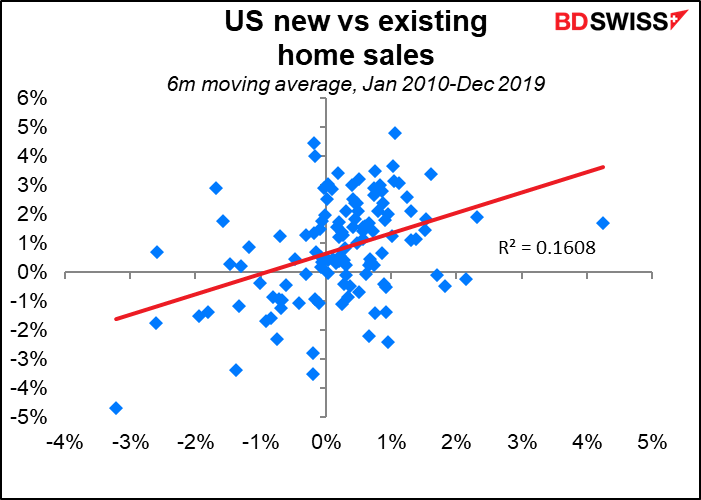 Why might new home sale outpace existing home sales? Indeed, why have home sales held up so well while the world is collapsing and tens of millions of people lose their jobs?

What I’ve read recently is that many people have realized that since they can work from home, they no longer have to live in a big city. They can move to someplace with a lower cost of living and more space. So a lot of people are apparently doing just that.

This would also explain why new home sales are going up faster than existing home sales. People who already live in these places aren’t moving – especially not with the unemployment rate what it is – so the only way these people can move out of Gotham and into Green Acres is to buy a new house.

In fact the number of existing homes for sale has been trending down for quite some time. 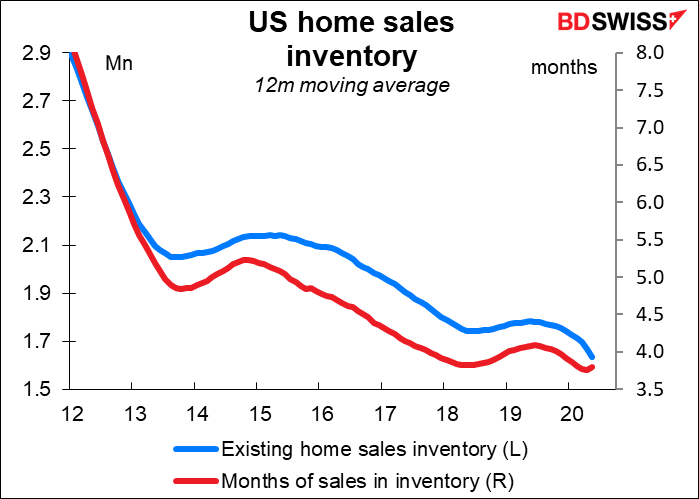 This trend out of the city and into the suburbs appears to be world-wide, according to a recent article in the Wall Street Journal.
The WSJ quoted from one mid-April poll as showing that 39% of urban dwellers in the US said the crisis prompted them to consider leaving for less densely populated areas. A mid-May survey in France showed that 38% of potential home buyers widened their searches further from big cities as they sought gardens and an extra room for remote working. And a German real estate portal showed that demand for houses in rural areas has risen steadily since lockdowns began in mid-March.
The Richmond Fed manufacturing survey is expected to rebound but still be negative. The Philly Fed index had a stunning rebound, to +27.50 from -43.10, while the Empire State index also came back sharply but not quite into positive territory at -0.2 vs -48.5 previously. Compared to those two, a result of -11 for the Richmond survey, as the consensus is expecting, would be a bit disappointing as it would show that region still in contraction. FYI while the Empire and Philly Fed indices get more attention because they’re earlier, in fact the Richmond Fed index has the best correlation with the ISM index, which is what people are trying to predict by looking at these. 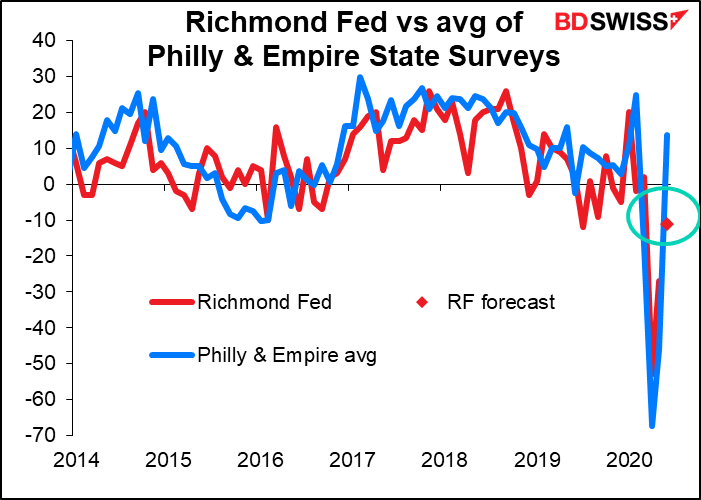 Overnight, the Reserve Bank of New Zealand (RBNZ) meets. Like many central banks, they are on hold indefinitely. At their last meeting (13 May), “the Committee reaffirmed its forward guidance that the OCR (Official Cash Rate) will remain at 0.25 percent until early 2021.”
Nor is there likely to be any need to do so. New Zealand has been one of the global success stories in dealing with the virus, which has practically been eliminated. There have been only eleven new cases since June began (two a day recently). 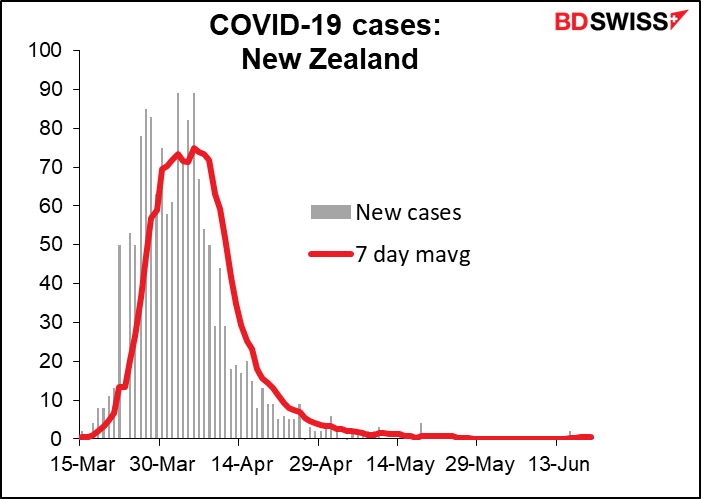 The earlier-than-expected end to new cases has allowed them to lift the lockdown earlier than expected, too. As a result, the statement may well be more optimistic. Last time they said that “The balance of economic risks remains to the downside.” They could be a bit more optimistic now.
Nonetheless, I would expect them to reiterate that they are prepared to do a lot more if necessary, including going to negative rates. “The Monetary Policy Committee is prepared to use additional monetary policy tools if and when needed, including reducing the OCR further, adding other types of assets to the LSAP (Large Scale Asset Purchases) programme, and providing fixed term loans to banks.”
What might get them to move? “We expect to see retail interest rates decline further as lower wholesale borrowing costs are passed through to retail customers,” they said in a not-so-veiled threat to the banks. Watch for any comments about bank lending rates. Also perhaps some comments about the currency, which has appreciated since the last meeting: NZD/USD has risen from 0.5991 to 0.6473 now, while AUD/NZD has moved down from 1.0774 to 1.0679
A slightly more optimistic tone may help to boost NZD further after the meeting. 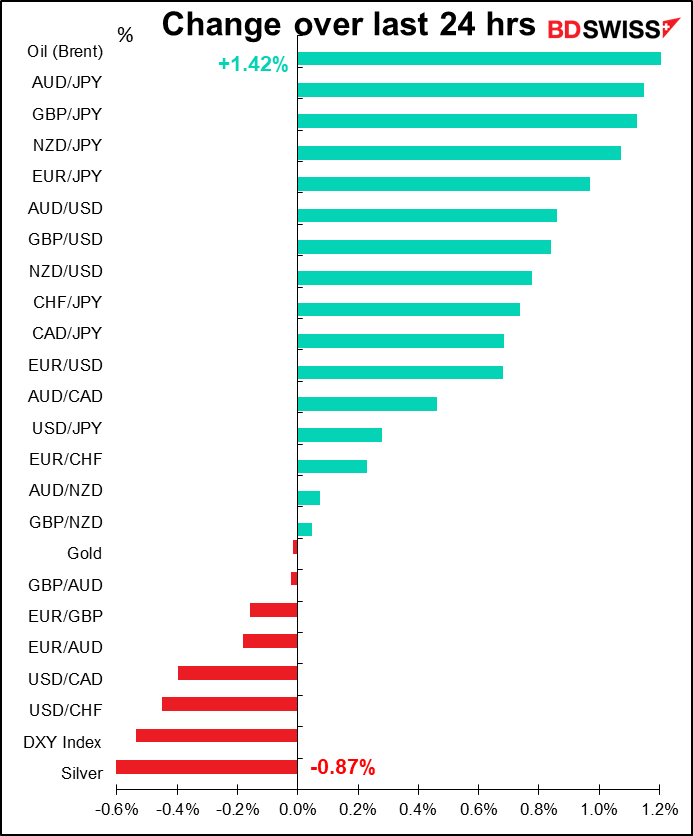