You are at:Home»MARKET PREVIEW»GBP Down as UK PMIs Revised Down; not much on the schedule

Currencies were still quite yesterday as the market (barely) got back to work after the long weekend.

The major movement was in GBP. The currency fell sharply as the manufacturing purchasing managers’ indices (PMIs) for Europe came out Tuesday morning. Unlike the other European countries, Britain’s manufacturing PMI was revised down sharply to 65.6 from 66.1.

So, you can see that the UK was an outlier in having its manufacturing PMI revised down.

The curious thing was that the bottom for GBP/USD came at 8:31, just a minute after the UK PMI was released. You can see that if we look at a two-hour snippet of the above graph, from 0700 GMT to 0900 GMT

Some others are saying that the weakness in GBP may be due to concerns about the new variant of the virus in the UK. It’s true that virus counts have started to turn up again, albeit just slightly, in the UK. 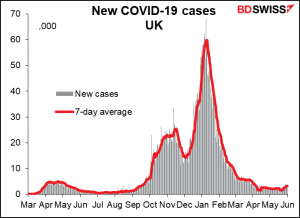 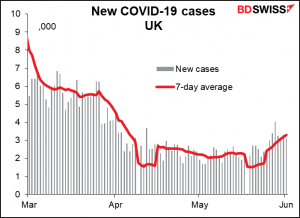 Elsewhere, the upward revisions to the EU PMIs helped to fuel a generally risk-on day. The European STOXX 600 rose 0.8% to another record high despite the slightly higher-than-expected EU CPI at +2.0% (estimate 1.9%), the first time it’s been at 2% since 2018. 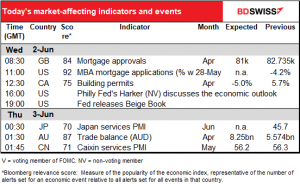 Mostly housing data today. Usually, the ADP employment report would come out on the first Wednesday of the month, but it’ll be released tomorrow because of the Memorial Day holiday Monday.

UK mortgage approvals are expected to continue to decline, which is not surprising considering how they soared over the last few months. 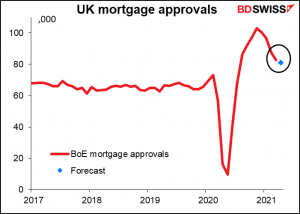 Approvals have been running well above trend recently, thanks to the extended stamp duty holiday in the UK. The government has waived stamp duty on the first GBP 500k of a house price until June 30th. Previously, buyers had to pay stamp duty on anything over GBP 125k. 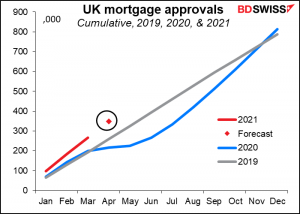 In the US however mortgage applications are running at a pretty normal pace, or even at the low end of normal. 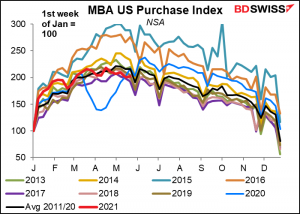 Building permits in Canada are expected to fall sharply. 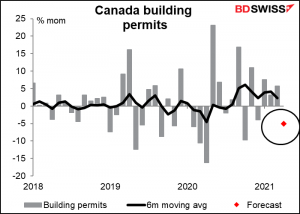 The Fed releases the “Summary of Commentary on Current Economic Conditions,” aka The Beige Book (which actually looks green to me, at least the version you can buy in the store) as always two weeks before the next FOMC meeting. It’s significant for the market because the first paragraph of the statement following each FOMC meeting tends to mirror the tone of the Beige Book’s characterization of the economy. The book doesn’t have any number attached to it that quantifies its contents, but many research firms do calculate a “Beige Book index” by counting how many times various words appear, such as “uncertain.” In any case, the book is largely anecdotal, so you’ll just have to watch the headlines as they come out.

Overnight we get start to get the service-sector purchasing managers’ indices (PMIs), including the final ones for those countries that have preliminary versions (like Japan). China’s is expected to be down a bit from the relatively high level that it was at before, so no big deal.

Australia’s trade balance has been in surplus for over three years now. The surplus is expected to grow to AUD 8.0bn, the fourth highest on record. Prices of many commodities continued to rise during the month (not iron ore however) and coal shipments resumed after being disrupted by flooding. Meanwhile imports, which surged in February and March, probably calmed down a bit. 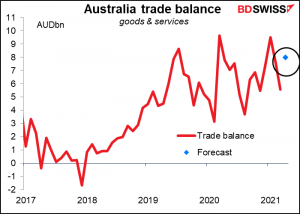 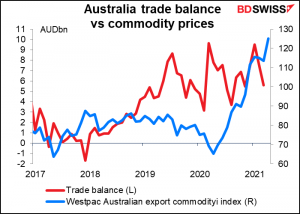 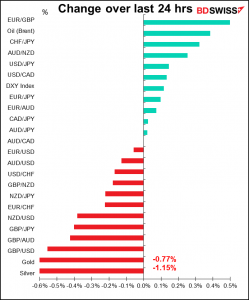