You are at:Home»MARKET PREVIEW»AUD Up on Higher Iron Ore, Other Currencies Calm; Manufacturing PMIs, EU CPI

Another dull-as-dishwater day in the markets, thanks to the holidays in the UK and US.

The only excitement was in AUD. The currency initially gained as iron ore futures jumped on reports that the government of the steel-producing city of Tangshan plans to ease production curbs for producers that have upgraded their emissions controls

Later however a dovish Reserve Bank of Australia (RBA) decision pressured the currency somewhat. As expected, they left all their policy settings unchanged, which was a foregone conclusion as they had said back in May that they’d review them in July. The language of the statement following the meeting wasn’t significantly different than before, perhaps out of fear that if they turned significantly more optimistic, what happened to CAD and NZD on hints of normalization would happen to AUD as well. While the RBA was a bit more positive on the labor market (they said: “Progress in reducing unemployment has been faster than expected” and noted that there are even some reports of labor shortages, they left the forward guidance totally unchanged. This dovish twist – not changing their view even as their assessment improves – caused AUD to weaken a bit.

I think the fall is only temporary. I expect speculation about Australia’s monetary policy to continue. More importantly, I expect the commodity boom to continue as the global economy gets back to normal and demand increases. 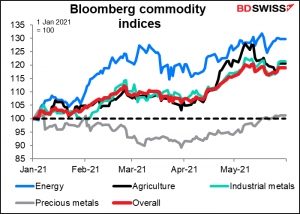 And as commodity prices rise, so too should AUD/USD… 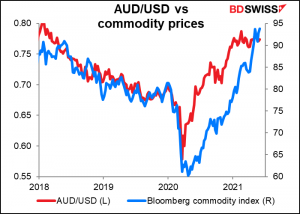 …and AUD/JPY even more so… 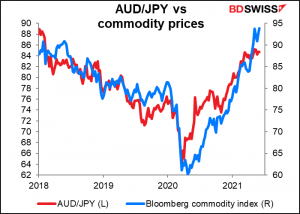 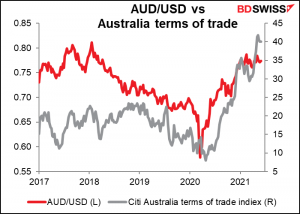 Oil was up after OPEC’s Joint Technical Committee met yesterday and increased its demand forecast for the rest of the year. It’s significant that oil prices rose in reaction to that news, because it also means that production is likely to rise, too. OPEC plus Russia and a few others, a group known as OPEC+, meets today. Based on yesterday’s demand forecast, today’s plenary session should agree to go ahead with the production increases that are scheduled to go into effect from July. That will bring production back up to where it was before they made some emergency cuts in response to the pandemic.

Going forward, the group is formally committed to holding output steady at July’s level until April 2022. However, they’re sure to discuss the outlook for demand and whether the market can bear an increase. Signs are that as more and more people are vaccinated and economies open up again, more people are moving around. That means more demand for fuel. The question is how high they will let prices go before they decide to increase supply. 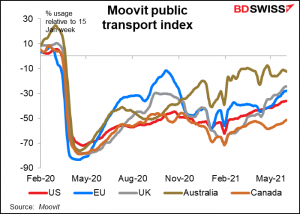 Their concern is that if prices get too high, it will become worthwhile for US shale producers to ramp up production again and US producers, not OPEC+, will reap the benefits of the latter’s restraint. The number of oil & gas rigs in use in the US, an indication of production capacity, hit a low last August and has been gradually rising again. I therefore expect that they will agree to increase production further at future meetings, eventually capping the price rise. 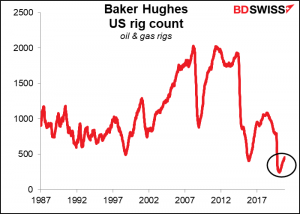 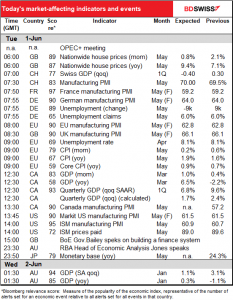 Today we get the rest of the manufacturing purchasing managers’ indices (PMIs), including the final version for those countries that have preliminary ones. Those don’t usually change very much and so usually don’t make much of a splash in the market.

The big one is the Institute of Supply Management (ISM) PMI from the US. Personally, I think the Markit version is more representative (Markit makes a convincing case of that, but of course they would). Today however the two are expected to more or less converge. That would still show the US with strong growth momentum, which should be good for stocks and perhaps negative for the dollar. 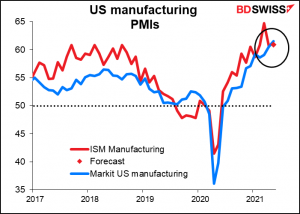 The prices paid index will be closely watched as a harbinger of future inflation. It seems to me to be more of a coincident indicator though, that is, it rises and falls with inflation rather than predicting it. In any case it’s expected to remain at the previous month’s very high level. 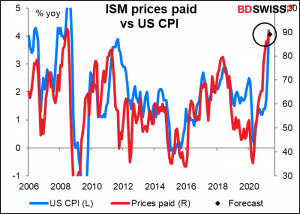 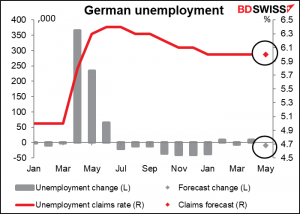 The EU-wide consumer price index (CPI) is more important. After yesterday’s German CPI came in pretty much on target at +2.4% yoy vs +2.3% expected (mom change was exactly as expected at +0.3% mom), the forecasts for today’s EU-wide CPI probably won’t be revised. The headline figure is expected to be exactly at the ECB’s target of “close to, but below, 2%.” 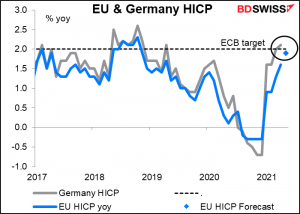 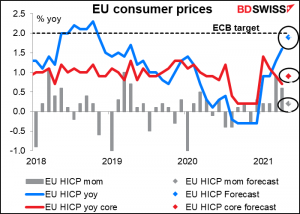 Not only is the current rate of inflation very different in the US and EU, inflation expectations are very different too. We look at the expected rate of inflation for the five years starting five years from now. In the US that’s in danger of becoming unanchored from the Fed’s 2% target. In the EU however it’s still well below that. The gap between the two has widened out significantly in the last few months. This different view explains why several Fed members are already talking about when they might start dialing back their aid to the economy, but such talk is largely absent (with one or two notable exceptions) in the EU. 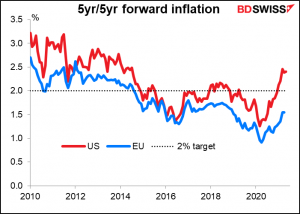 Canada’s monthly GDP is expected to show the fastest rise since the recovery period last year. The forecast would bring output back to within 1% of the pre-pandemic level. Most sectors are contributing to growth: household spending, construction, business investment, and a small contribution from trade. For the quarter as a whole, output is expected to be up a robust 6.8% qoq SAAR. This would be more or less equal to the Bank of Canada’s 7% prediction in its April Monetary Policy Report and so should require no adjustment of policy. On the contrary, it might confirm their decision to taper their bond purchases and encourage them to keep on this path, which would be positive for CAD. 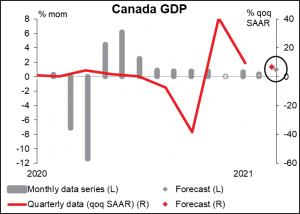 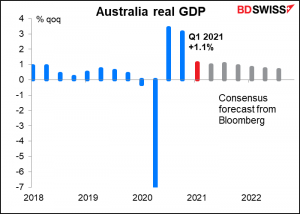 But Australia is so far ahead of Canada that it will almost – almost! – be back to pre-pandemic output levels in Q1 based on this forecast. It should surpass pre-pandemic levels in Q2. By contrast, in Canada it won’t be until Q3, according to the Bloomberg consensus forecast. Australia benefited in Q1 from substantial policy stimulus and a further relaxation of restrictions, although there were a few short lockdowns here and there. Net exports however are estimated to have subtracted substantially from growth. 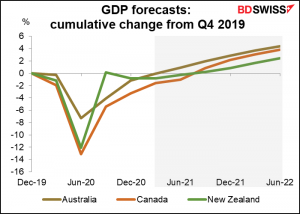 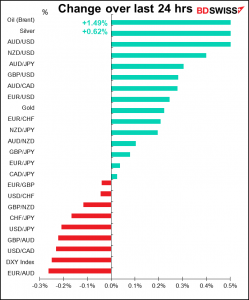