You are at:Home»MARKET PREVIEW»AUD Up Ahead of Inflation Data; US Consumer Confidence, Australia CPI 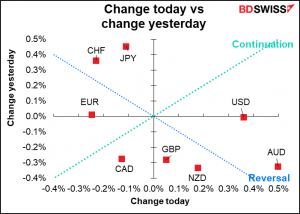 Risk-on, risk-off, risk-on, risk-off…the markets are like a cork bobbing on the waves of investor sentiment. Yesterday was a ‘risk-on day, with the Euro STOXX 50 unchanged and the S&P 500 up +0.5% to another record high, driven by consumer discretionary stocks in general and automakers in particular after Tesla (+12.7%) got an order for 100k cars from car rental company Hertz. The rise in its share price pushed Tesla over the $1tn market capitalization, the first automaker to reach that landmark. It also helped other tech stocks to outperform and the NASDAQ rose 0.9%.

AUD was the best-performing currency over the last 24 hours. Perhaps people think that tonight’s Australia CPI will convince the Reserve Bank of Australia to change its view on rates, which is increasingly at odds with what the market is thinking? See below for more information.

Oil is lower this morning on my reckoning – prices rose during the day yesterday as several OPEC+ members indicated that they were just going to stick to their plans to raise output by 400k barrels a month and not increase production faster. However later in the day Iran said it will begin talks with the EU on Wednesday to restore the 2015 nuclear deal, with the potential to lift sanctions on its oil exports. Iranian output has fallen by about 1.3mn barrels a day since the nuclear deal collapsed. 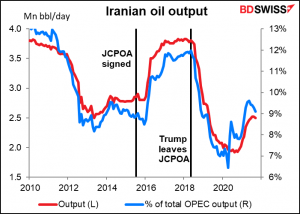 CAD underperformed on the weaker oil. I think the negotiations are likely to be just talk talk talk and at the end of the day the EU won’t lift the sanctions. I expect next week’s OPEC+ meeting to reaffirm the group’s plan to increase output only gradually, which I would expect to send oil prices – and CAD – back up.

JPY was weaker, as one would expect against the background of central banks beginning to normalize policy. However there is one warning sign temporarily for JPY. Lots of retail investors in Japan are long TRY against JPY as a carry trade. With overnight rates close to 16%, this must look attractive set against Japan’s negative rates. However, carry trades have long been described as “picking up nickels in front of a steamroller” in that a sudden movement in the currency you’re long can easily wipe out all of the gains from the positive carry and more. As TRY/JPY falls ever further, people may start bailing out of their positions, which could temporarily push JPY higher (USD/JPY lower).

For now, Turkish President Erdogan has dropped his demand for 10 Western ambassadors to be expelled from Turkey, the cause of the latest crash in TRY, but one suspects that it’s only a matter of time before the next crisis occurs and USD/TRY breaks the record lows set on Monday. 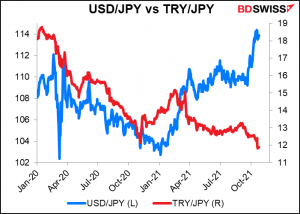 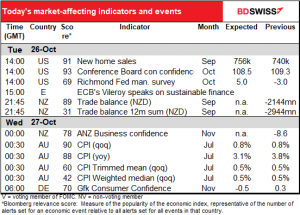 Once again not the most active day on the indicator front. Nothing worth discussing during the European morning.

When the US day gets underway, we get US new home sales. They’re expected to be up by 2.0% mom, compared to the 7.0% rise in existing home sales last week (which blew away the +3.7% mom consensus forecast). My guess is that the main thing restraining sales is the limited number of new houses for sale, given the labor shortage in the building industry. In any event the figures should confirm the strength of the housing market, which will help to boost Q3 GDP = USD+. 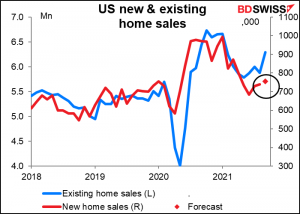 Conference Board consumer confidence is expected to fall a bit, as did the U of Michigan consumer sentiment index. I think the depressed level of consumer confidence is a negative for the dollar. It makes me think that perhaps the market is too aggressive in thinking that the Fed is likely to hike rates twice next year, as the Fed funds market is discounting. Fed Chair Powell’s Friday said, “I do think it’s time to taper, and I don’t think it’s time to raise rates. It would be premature to do so at a time when we are far below the level of jobs we had in 2020.” 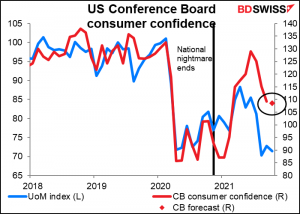 The fall in consumer confidence suggests that maybe the job market isn’t as robust as people think. The “jobs plentiful” index minus the “jobs hard to get” index has started to turn down along with confidence – confidence is influenced to a large extent by the job market. Although the Job Offers and Labor Turnover Survey (JOLTS) shows more than one job opening for each unemployed person, job creation has slowed for various reasons. It may be that even people who want to work can’t find a job that they want. 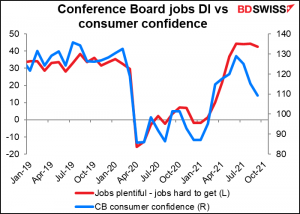 Overnight, Australia announces its consumer price index. It’s one of the few ones I know of, and the only one this week, that’s expected to show a slowdown in the rate of inflation. Is this the first peek of that Holy Grail of the monetary officials, transitory inflation? Alas, it’s due more to base effects. While the headline rate of inflation is expected to slow, the trimmed measures (trimmed mean and weighted median) are both expected to rise, thanks to rising prices for fuel, housing, and food.

Also, Australia has managed to avoid some of the spikes in inflation seen elsewhere, such as New Zealand and the US, because used cars aren’t included in the CPI (a major factor in pushing up the CPI in those two countries) and the HomeBuilders’ grants have pushed down the price of housing.

For now, it’s hard to tell what the underlying situation is with inflation, because the “signal” from the indicator is distorted by the “noise” from lockdown measures in place during the quarter. Furthermore, house prices are likely to rise as the HomeBuilder grants expire. As a result, the Reserve Bank of Australia (RBA) will probably want to hold off judgment until it can get an undistorted view of price changes once the post-vaccine recovery is underway. That won’t start to become apparent until Q4 and probably won’t be 100% clear until next year sometime. 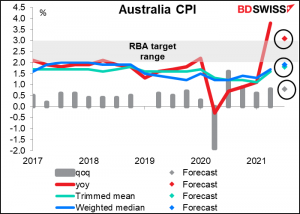 The RBA is expected to be among the slower central banks in hiking rates. Nonetheless, investors clearly don’t believe the RBA’s estimate that they won’t be able to start hiking rates until 2024. The market is already pricing in some six rate hikes by then! A survey last week of 24 economists by The Australian Financial Review showed that two expect the first rate move in 2022, one in Q1 2023, five for Q2 2023, 10 for late 2023, and only six agreeing with the RBA that it would be 2024. 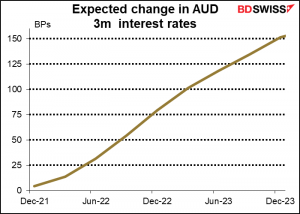 Either the market will have to readjust its expectations or the RBA will have to adjust its guidance. I expect the latter, which could be positive for AUD. That might happen on Thursday, when RBA Deputy Gov. Debelle and RBA Assistant Gov. Bullock apear before the Senate Economics Legislation Committee. Or maybe we’ll have to wait until next Tuesday, when the RBA meets again.

Is It April 1st in October? Department

I was surprised to say the least at this Twitter post. Apparently the UK Government is using convicts who know how to drive trucks to fill in during the Great Lorry Driver Shortage. This driver’s offense? Using trucks to import drugs.

Next up: using people convicted of knife crimes to solve the problem of a shortage of abattoir workers? 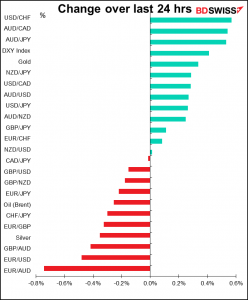