You are at:Home»MARKET PREVIEW»FX Market Becalmed ahead of US CPI, ECB Meeting; JOLTS Report

Hibernating in June? The currency market was nearly frozen yesterday, with the trade-weighted indices all remaining within a ±0.1% range of the previous day’s level.

Volatility isn’t at a record low by any means. It just seems that way after the big excitement last year this time. I’m not sure I’d want to repeat that episode, however. 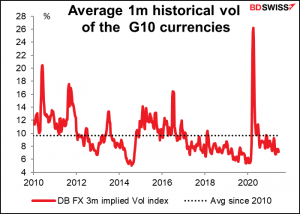 The doldrums are widespread – all major pairs are below their average vol. 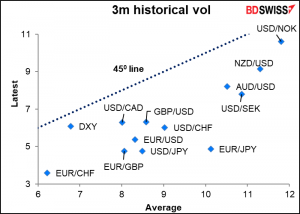 Markets are just treading water ahead of Thursday’s US consumer price index and the European Central Bank meeting. 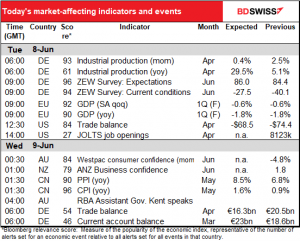 The ZEW Survey of economists, analysts, and other halibuts of the financial markets — bottom-feeders who make a living off scraps that fall from the savers & investors above — is expected to show continued improvement, especially in the “current situation” index, which is forecast to be up 12.6 points from the previous month. That compares with an expected rise of just 1.6 points for the “expectations” index. In other words, the recovery is now pretty fully discounted and people are just watching the day-to-day improvement as vaccination rates increase and life slowly gets back to normal.

Note that the ZEW is a survey of analysts and so is more of a sentiment indicator than an indicator of actual activity, like the PMIs or the Ifo indices. 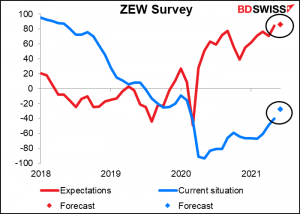 The final estimate of EU-wide GDP should hold no major surprises, nor even any minor surprises either.

The US trade deficit is expected to narrow a bit. This should be no surprise, since the goods-only deficit – the advance trade report – narrowed a bit. I’m continually mystified at why this indicator has so much higher a Bloomberg relevance score than the advance goods trade balance (84.25 vs 5.5) when the latter accounts for the bulk of the move. 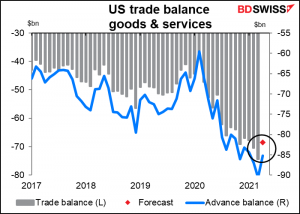 It’s particularly odd since one explains 93% of the movement in the other. 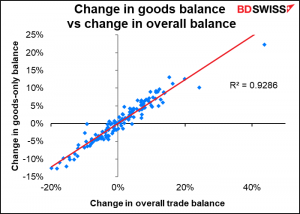 Now comes the indicator with the largest writing-to-relevance ratio of any indicator I follow, the Job Offers and Labor Turnover Survey (JOLTS) report. That is, I write a lot about this indicator even though it has a relatively low Bloomberg relevance score. I wrote about it extensively this week in my Weekly Outlook, which I’m sure you read religiously every week, don’t you? Please say you do even if you don’t, otherwise I’ll be deeply disappointed. I imagine readers pouring over it with a yellow marker pen, highlighting various points of interest. I fantasize about people looking at their email inbox on a Friday, wondering “why isn’t it here yet?” Although I know the reality is more like what I used to do at one of my banking jobs: I printed out my morning comment and put copies in the toilet stalls, knowing that that was the best chance I had to capture readers’ attention.

There’s no forecast for the JOLTS figure on job openings. Last month (March) was a record high. 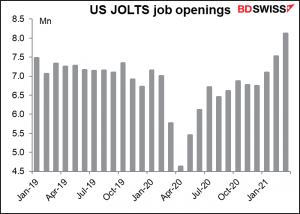 If there are even more jobs in April, it will suggest to some observers – such as St. Louis Fed President Bullard – that it’s “a very tight labor market,” since the ratio of of unemployed workers to job openings is very low. That would reduce the need for the Fed to keep supporting the economy so much and would probably bring forward estimates of when the Fed will start normalizing policy. The result would probably be a “risk-off” mood in the stock markets and a higher dollar. 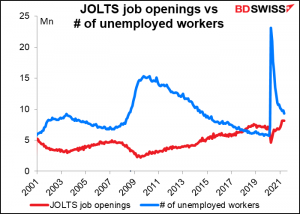 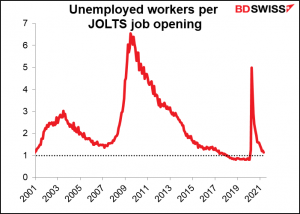 In any event, the big mystery of the labor market nowadays is why payrolls aren’t growing even faster as the economy opens up again. All the indications are that companies are looking for workers. Exhibit A in this discussion is the JOLTS report, which last month showed a record number of job openings (data back to Dec 2000). In case you want a longer data series, Exhibit B is the National Federation of Independent Business (NFIB) job indicators, which go back to 1974. Hiring plans are at a record high, but so are “job openings hard to fill,” while 54% of companies find there are few or no qualified applicants, not far off the previous high of 57%. 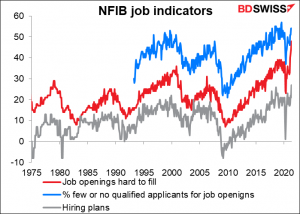 Then that’s it until Asia opens up.

Australian consumer confidence fell last month, but from the highest level in nearly 11 years (August 2010), so it can be forgiven. No forecast. 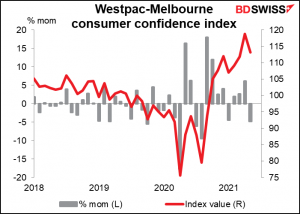 No forecasts for the ANZ survey of business opinion in New Zealand either, but it does sometimes move the FX market when it comes out. 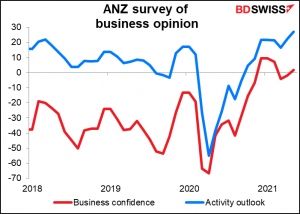 Finally, as the day dawns in Europe again, Germany releases its trade and current account figures. I got used to writing about these when He Who Must Not Be Named was making a big deal out of the US trade deficit, but now I think we can safely go back to ignoring this indicator every month. 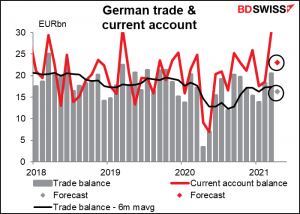 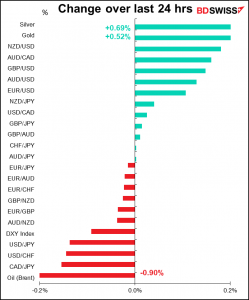