You are at:Home»MARKET PREVIEW»CHF Up, Commodity Currencies Down as Oil Surges; Bank of Canada Decision

The exception was oil, where the US benchmark West Texas Intermediate (WTI) crude gained 2.8% to close over $70 a barrel for the first time since October 2018. The main impetus behind the rise was a comment by US Secretary of State Antony Blinken, who said that even if the US were to reach a nuclear deal with Iran, hundreds of sanctions would remain in place. That calmed fears that an agreement would free Iran to flood the market with an additional 1.4mn b/d. 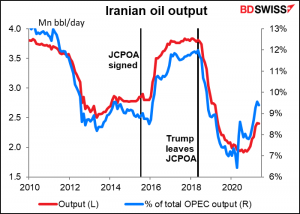 Yesterday’s oil inventory data from the American Petroleum Institute (API) showed a somewhat smaller-than-expected drawdown in inventories, plus the second consecutive increase in both gasoline & distillate inventories. Still, with US production falling by 200k b/d during the latest week, the market took the third consecutive weekly fall in crude inventories positively. 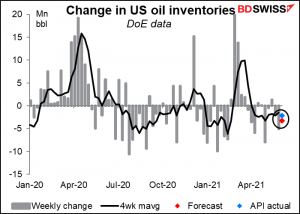 CAD failed to track oil prices higher and instead followed the other commodity currencies lower in a general “risk-off” mood in the FX market.

CHF was the best-performing currency as German Bund yields fell, reducing the attractiveness of German bonds relative to Swiss bonds. EUR/CHF broke below its recent low of 1.0927. 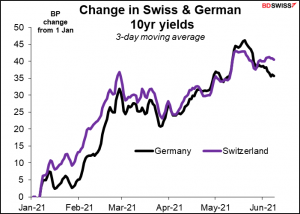 The only interesting market today, aside from oil, is the US Treasury market. Ten-year yields fell 3.7 bps yesterday to 1.526%, the lowest level I’ve recorded since March 5. This is astonishing to me as we approach what’s supposed to be the “make-or-break” US consumer price index (CPI) for May on Thursday. The decline in yields was driven by lower breakeven inflation expectations, which ended the day at 2.37%. They’re almost back to where they were before the April CPI was released (2.34%). It looks to me as if the Fed and the Administration have won over the market to their view that higher inflation is only “transitory.” 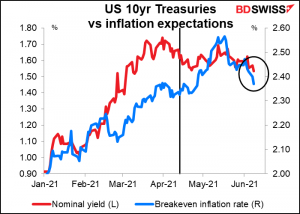 The amazing thing is that this occurred as China producer price inflation, announced overnight, went through the roof. The producer price index (PPI) was up 9.0% yoy, not far off the record of 10%. Base effects contributed 3 percentage points and price hikes 6 percentage points to the rise, according to the China Statistics Bureau. (Note though that CPI inflation is still low and indeed came in below expectations, adding some evidence to the theory that the higher inflation is caused by temporary supply/demand imbalances and won’t cause a secular increase in inflation.) 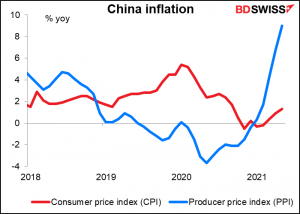 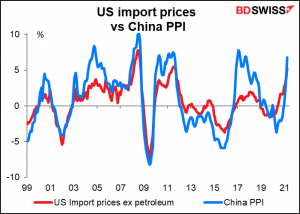 As a result of the soaring PPI inflation, China’s National Development and Reform Commission (NDRC), the economic planning agency, announced price controls on “important livelihood commodities,” which appear to be food, although food prices aren’t rising very much at all in China. 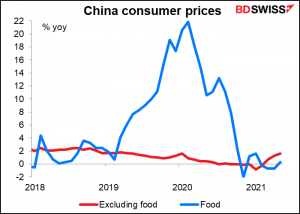 More worrisome, the NDRC said it would “actively do a good job in the regulation of the bulk commodity market” and “strengthen market supervision,” which is probably a euphemism for price controls. For example, Bloomberg reported that the country is considering imposing price controls on coal. Of course, it’s a Communist bureaucrat’s dream to imagine that they can set both price and supply, especially for commodities that are widely traded in the global market, but the risk is that fears of Chinese price controls may hit AUD and NZD over the next few days.

The main thing on the schedule today is the Bank of Canada rate decision. As usual, I ran through everything in my Weekly Outlook, and as usual, I’ll run through the important points here again to save you the trouble of looking at that.

The Bank of Canada cut its weekly bond purchases at its last meeting, in April. I doubt whether they will make any more changes at this meeting. I think they’re unlikely to taper their bond purchases further, because the economic data recently has been somewhat weaker than forecast in the April Monetary Policy Report. For example, Q1 growth was 5.6% qoq SAAR, below the Bank’s 7% forecast. At the same time, it’s not been weak enough to warrant reversing that decision or taking any further action. Any new action will probably have to wait for the July meeting, when a new Monetary Policy Report will bring new forecasts.

The main thing to watch for then is any change in language regarding further adjustments to the asset purchase program. In April, the Bank said, “Decisions regarding further adjustments to the pace of net purchases will be guided by Governing Council’s ongoing assessment of the strength and durability of the recovery.” Let’s see if they make that any more concrete. There was also the pledge to keep rates at the effective zero bound until “some time in the second half of 2022,” which was a change from March’s “until into 2023.” Will they adjust that in light of recent developments? Stay tuned!

And that’s about it for today except for the US oil inventory figures, which I discussed above.

Overnight we get Japan’s corporate goods price index, aka producer price index (as it’s called in most other countries). It’s notable how in a country where the consumer price index is still in deflation, this index is soaring. This indicates pressure on corporate profit margins, which could dampen interest in the Tokyo stock market. That’s bad for risk sentiment and therefore positive for JPY. 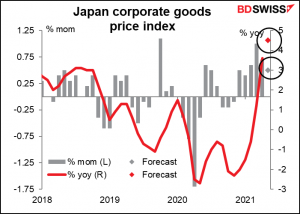 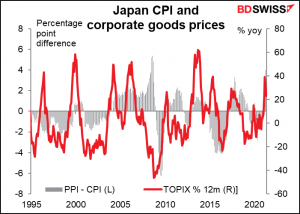 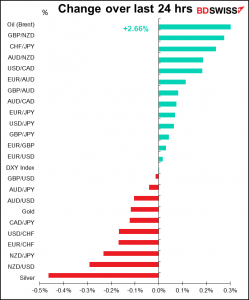