Friday’s US nonfarm payrolls were good, but not as good as the market was expecting. The less-than-stellar 559k increase in jobs (vs +675k consensus) fuelled a USD sell-off. The result was basically a reversal of the previous day’s movements.

Using Bloomberg’s equivalent of the trade-weighted indices, we can see the movement of most currencies over Friday and this morning is simply the reverse of what they did Thursday and early Friday. 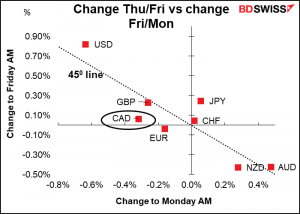 CAD was an underperformer – note its distance from the 450 line. That’s because its unemployment data, also released Friday, also disappointed – the country lost 68k jobs in May vs expectations of -25k, and the participation rate fell.

This news makes it a bit less likely that the Bank of Canada will taper its bond purchases further at Wednesday’s meeting (which I didn’t think was likely to happen anyway). That’s negative for CAD in case anyone harbored any lingering hopes in that field. I’ll be looking for some commentary on these figures in Bank of Canada Deputy Director Lane’s Economic Progress Report speech on Thursday. I doubt if they’ll be too concerned as virus cases have come down sharply and therefore lockdown measures will be lifted soon.

Oddly enough the good-but-could’ve-been-better US payroll figures fuelled a “risk-on” mood in the stock markets as it made a near-term Fed tightening less likely (the ol’ “bad news is good news” phenomenon). The S&P 500 closed up 0.9% and NASDAQ +1.5%. 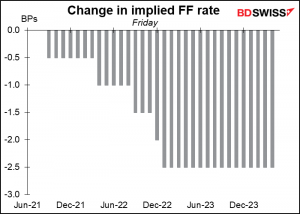 Over the weekend, the G7 finance ministers agreed to a minimum global corporation tax of “at least 15%” on overseas earnings. The G20 finance minister will take up the issue in July. If they agree, then the discussions underway at the OECD will feel a strong push in that direction.

Yesterday there was an election in the German state of Saxony-Anhalt. It looks likely that Chancellor Merkel’s Christian Democratic Union (CDU) will win the election. More importantly perhaps is that the AfD, which was coming up strongly in the polls beforehand, looks likely to lose. Projections are that the CDU will win 37%, up from around 30i% it won in the state in 2016, while the AfD looks likely to get 22%, down from 24%. This was the final state election before the national vote in September. It should provide a boost to CDU leader Armin Laschet in his effort to succeed Merkel as Chancellor. This is a positive development for the euro, albeit not that much ahead of Thursday’s ECB meeting.

The CoT report echoed the relatively narrow range in currencies that we’ve seen recently by showing only relatively small changes in positioning. Overall speculators continued to increase their short dollar positions, mostly by extending their long EUR and EUR positions. They also trimmed their short JPY positions and flipped from (just barely) short CHF to long CHF. On the other hand, they cut their long GBP and NZD positions and went further short AUD, although again all in small amounts. 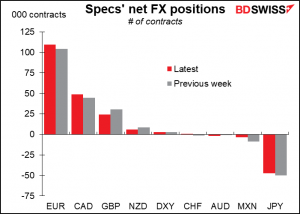 I was wondering about positioning in AUD vs NZD. Specs’ net position (AUD position minus NZD position) is rather small recently, in line with AUD/NZD being near the middle of the 1.00-1.15 range that it’s been trading in for the last several years. 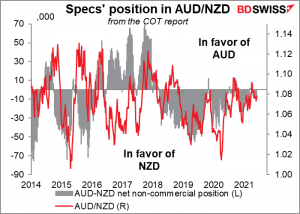 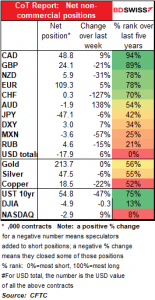 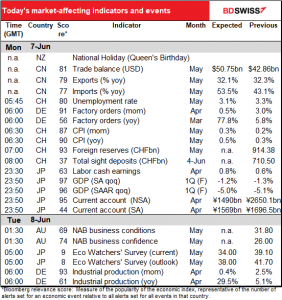 There’s bizarrely little on the schedule today. By the time you read this most of today’s data will be out already.

Swiss foreign exchange reserves attract a lot of attention (well, relative to other Swiss economic indicators) but in fact are a fairly unreliable way of estimating Swiss foreign exchange intervention, because they’re affected by changes in currency value. The weekly change in sight deposits seems to be generally a more reliable indicator, as far as we know. 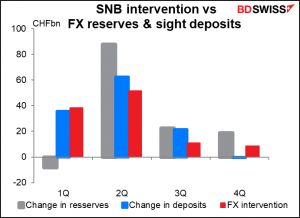 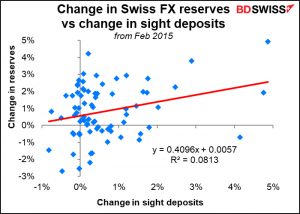 Having said that, reserves fell in April. Will they fall again in May? I doubt it. 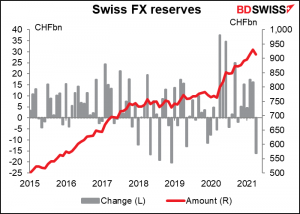 Sight deposits grew sharply in May, suggesting a lot of intervention. But USD/CHF fell to 0.8989 from 0.9109 (EUR/CHF was virtually unchanged at 1.0990). That will reduce the value of the foreign exchange reserves in CHF terms, possibly making it look like they fell. 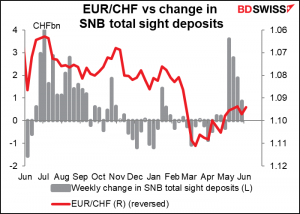 And then that’s it!

The next indicator isn’t out until the Asian day begins and Japan releases its current account figure, plus the final revision (for now) of its Q1 GDP, the largely ignored labor cash earnings, and the totally ignored Eco Watchers’ Survey.

The current account surplus is expected to plunge on a not-seasonally-adjusted basis, but that’s apparently normal this time of year, because the seasonally adjusted figure is forecast to be down only a little. The report could indicate continued good support from foreign economies as the world opens up again, which would be positive for the yen – although to be honest, the yen isn’t really moving very much nowadays. 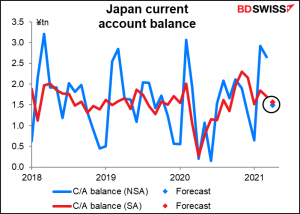 Japan’s labor cash earnings finally turned positive yoy last month and are expected to continue to move higher. That’s good news for the Japanese economy too, if people have more money to spend. 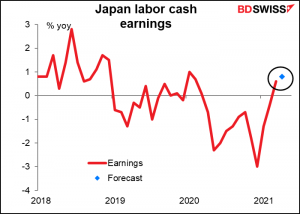 On the other hand, the poor maligned Eco Watchers’ Survey is expected to show a further decline in Japan’s beleaguered service sector. 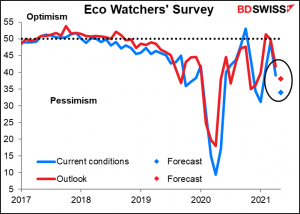 Japan’s service sector lags behind the rest of the developed world. 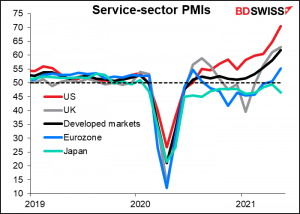 No forecasts for the National Australia Bank (NAB) business sentiment indices, but they do sometimes move the market. 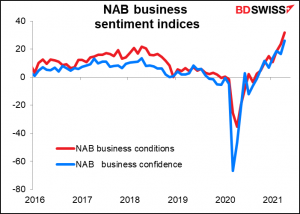 Then German industrial production is forecast to be up just a bit from the previous month, but thanks to the collapse in April 2020, it’s expected to be up some 29.5% yoy. On the other hand, this morning’s disappointing factory orders for April (-0.2% mom vs +0.5% expected) casts some doubt on the forecast. 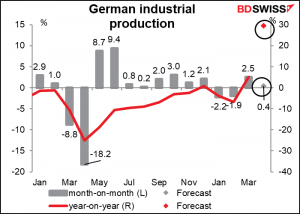 At this rate it would be down just 3.5% from the pre-pandemic level. 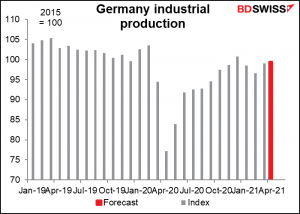 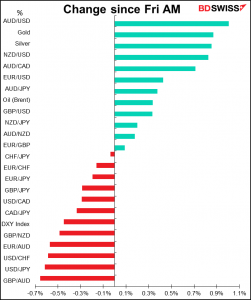