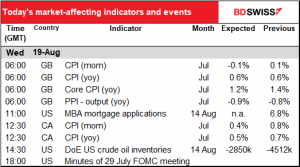 Dollar weakness continues. EUR/USD climbed decisively over 1.19 and traded as high as 1.1966 before retreating somewhat. GBP, which I had expected would be reaching parity with IDR about now, was even stronger; GBP/USD broke over 1.32 to trade as high as 1.3265 and EUR/GBP fell from around 0.9060 at the beginning of the Asian day to 0.9013 as I write. GBP/USD was boosted by a “golden cross” as the 50-day moving average at 1.2732 moved above the 200-day moving average at 1.2720, drawing momentum traders in.
There are two competing stories about the US right now. On the one hand, the virus is starting to come under control, or at least burn out (or maybe it’s just that the Trump regime’s restructuring of the virus reporting system is having its intended effect of masking the actual number of infections). 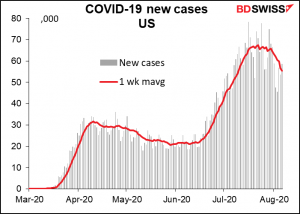 On the other hand, the Republican lemmings are jumping off the fiscal cliff. The Senate Republicans are making no moves that I can detect to work out their proposal for CARES 2.0, let alone entering into negotiations with the House. That means in a few days or weeks at the most, millions of people will lose their Federal benefits. To make matters worse, aid to cities will stop, meaning public transportation – already hit by a drop in riders — will lose a lot of its funding. Bus runs will have to be cut further and even the people with jobs won’t be able to get to them.

Accordingly, the outlook for US growth – already falling behind Europe – is getting grimmer. The Fed’s weekly update on US economic activity, released yesterday, revised upwards its estimate of the previous week’s activity but estimated that activity slowed in the latest week. 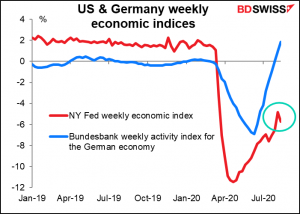 The outlook for the dollar is to some degree a tug-of-war between these two issues. I think the economic one is likely to win out, because a) I don’t believe the new numbers, and b) I think the outbreak is going to get worse again as schools reopen. Thus I remain bearish on the dollar.

Also running in the background is the continuing US-China trade dispute. That issue seems to have less and less impact on financial markets, though. Trump has been ramping up the pressure on Huawei and yesterday announced he canceled last weekend’s trade talks with China, raising questions about the future of the Phase One trade deal China. Nonetheless that didn’t prevent the S&P 500 and NASDAQ from both closing at record highs.

Meanwhile, NZD was the best-performing currency in the markets, which is a big big mystery to me – I can only find reasons why it should be weaker, such as two more banks predicting negative rates next April (ANZ and Barclays) plus a fall in the average price for whole milk powder at yesterday’s auction. 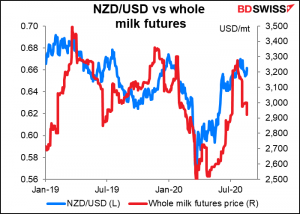 There is a meeting of the OPEC+ Joint Ministerial Monitoring Committee today. Officials will discuss how well the group has complied with the output cuts over the last month. Apparently compliance is pretty good, so nothing much is expected from the meeting and they should just agree to continue with their cuts of 7.7mn bbl/d.

Today is inflation day. We covered UK inflation yesterday, which by the way came in much higher than expected (core inflation +1.8% yoy vs 1.2% expected, 1.4% previous), therefore reducing the likelihood of Bank of England loosening.

It’s curious – the market pays the most attention to the yoy rate of increase in Canada’s headline consumer price index (CPI), then the mom rate. People pay hardly any attention at all to the three core measures of inflation (median, common, and trim) that the Bank of Canada also publishes. But while the Bank expresses its inflation target in terms of the headline figure, the core measures are its operational guides” to policy – i.e., the ones that will influence their decision on interest rates. These therefore should be more important. But when trading, what matters is what everyone else is looking at and what they’re going to respond to, not what the “should” look at. (I just wrote about this topic, “Don’t be smarter than the market,” on the NASDAQ website) 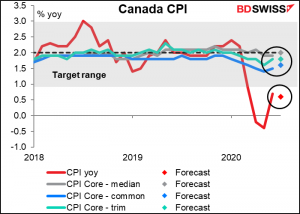 In its latest Monetary Policy Report (MPR), released at the time of the last BoC meeting in July, the BoC said “Consumer price index (CPI) inflation is expected to remain weak before gradually strengthening toward the 2 percent target.” This seems to be the consensus among central banks; I’ve heard virtually the same thing from everyone.

The MPR also noted that “The consumption patterns of Canadians have changed dramatically since the start of the pandemic.” For example, people are spending more on food and medicine and less on transport and entertainment. The Bank created a new price index based on the new spending patterns. “It also shows a sizable decline in inflation, albeit one that is slightly smaller than in the official CPI,” they said.

In short, I think the Bank of Canada – like the Bank of England last week – expects a period of weak inflation and isn’t necessarily going to change policy based on what the CPI is doing.

Nor does the Bank of Canada seem to be as concerned about inflation expectations as the Bank of England or other central banks for that matter. Expectations have been below target for several years now without setting off any alarm bells. 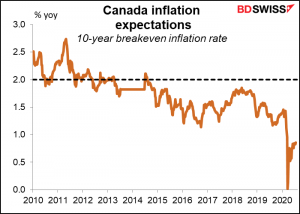 US oil inventories are expected to fall once again, but attention will focus on the gasoline inventories. Yesterday’s data from the American Petroleum Institute (API) showed an encouraging 4.3mn barrel drawdown of crude oil inventories. 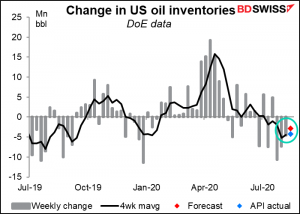 But the market focused on an unexpected increase in gasoline inventories of 4.991mn bbl, compared with the previous week’s 1.310mn bbl drawdown. Market participants are looking for a 1.0mn bbl drawdown from the Dept of Energy today. It’s worrisome for the market when gasoline inventories rise during the Northern Hemisphere’s summer, which is the peak driving season in the US. 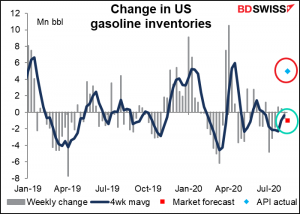 Finally, the main event of the day will be the release of the minutes from the latest Federal Open Market Committee (FOMC) meeting. The minutes usually contain some fascinating tidbits even after Fed Chair Powell holds an exhaustive press conference following the meeting.

Since the July meeting came up with no new policy developments, the focus will probably be on their discussion about “the broad review of the strategy, tools, and communication practices” that the Fed started back in 2018. That seems to be drawing to a close – Powell said the Committee aims to wrap it up in the “near future,” which many people take to mean September.

The minutes will give us a hint of what changes the Committee is considering for how they operate monetary policy. Those hints are likely to be presented in more detail at next week’s annual “Jackson Hole” symposium for central bankers (which will take place virtually this year). And then the concrete proposals may be revealed at the September FOMC meeting.

Indications are that the Fed may switch to an average inflation target, rather than setting an inflation ceiling at 2%, as they do now. That would mean they would allow inflation to overshoot their 2% target to compensate for periods when it’s under 2%.

This change raises several questions. First off, how high would they let inflation go to compensate for an undershoot? Secondly, if inflation doesn’t get back up to 2% — or 3% or 4% or whatever they deem necessary to compensate — what would they do? So far the Fed has rejected the idea of using negative interest rates. But faced with a situation like Japan’s, where inflation is stubbornly below target, they’d have to use even more aggressive easing tactics, such as more asset purchases or yield curve control. And if the economy improves, will they continue with these aggressive purchases? And what about their employment mandate – how does that fit into the picture?

The answers to these questions make a big difference to the foreign exchange market. Right now, their strategy is to keep policy accommodative, that is, keep interest rates below what they deem to be the long-term equilibrium rate, until inflation gets up to 2%, at which point they will begin to bring rates back to a more normal level – depending on the employment situation of course, in line with their “dual mandate” of “maximum employment” and “stable prices.” If they change to an inflation averaging policy, they wouldn’t be raising rates as quickly as inflation rose. Coupled with yield curve control, that would mean lower real yields and therefore a weaker dollar along with higher risk assets and gold. 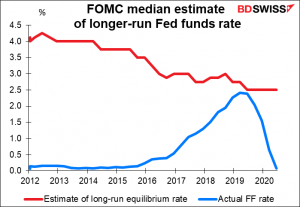 As mentioned above, the Committee is also reviewing its “communication practice.” The minutes of its June meeting said “Various participants noted that… it will be important in coming months for the Committee to provide greater clarity regarding the likely path of the federal funds rate and asset purchases.” Perhaps they’re going to amend the closely watched “dot plot” somehow, or add a line to the quarterly Summary of Economic Projections (SEP) with everyone’s forecasts for asset purchases. That might help to avoid a future “taper tantrum,” like what happened in 2013 when the Fed started to wind down its quantitative easing program. We look forward to hearing more about these issues. 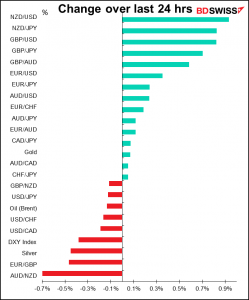