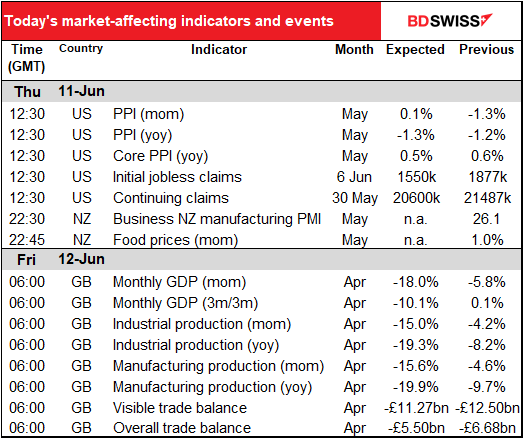 The Federal Open Market Committee (FOMC) didn’t surprise the market at all. The statement following the meeting was almost unchanged from March, and no new programs or policies were announced. The only change was that they said the Fed would “increase its holdings of Treasury securities and agency residential and commercial mortgage-backed securities at least at the current pace…” (emphasis added), thereby removing the possibility of a hawkish surprise while leaving the door open to more loosening.

The Committee’s assessment of the situation was unchanged from April’s gloomy conclusion:  “The ongoing public health crisis will weigh heavily on economic activity, employment, and inflation in the near term, and poses considerable risks to the economic outlook over the medium term.” There was little of the cautious optimism that the Reserve Bank of Australia or Bank of Canada expressed recently. While Fed Chair Powell did note that “In recent weeks, some indicators suggest a stabilization or even a modest rebound in some segments of the economy,” he emphasized the risks far more. Even the unexpected drop in unemployment in May was seen as an indication of how little the Fed understands about what’s going on rather than a reason for optimism. “We see the path ahead for the economy is highly uncertain and continues to depend to a really significant degree on the path of the pandemic,” he said.

Overall, the main messages from the published material and Fed Chair Powell’s press conference are that the Committee remains cautious about the economic outlook and the risk of a change in policy is skewed almost entirely toward more accommodation rather than less. The Committee’s members see almost no possible reason over the forecast period for them to consider tightening policy. As Powell said, “we’re not thinking about raising rates. We’re not even thinking about thinking about raising rates.”

Here’s their new forecast table. To me their forecasts seem pretty optimistic, particularly with regard to unemployment.

The Fed’s forecasts for growth and inflation are not a million miles from what the market is thinking. The Fed sees a worse economy this year but more of a bounce-back next year, which implies a similar end-point for the economy, just a slightly steeper path. The Fed and the market see inflation nearly the same at the end of the forecast period. The big difference is in unemployment, where the Fed is noticeably more optimistic than the market.

Nonetheless, note that the Fed sees unemployment at about 4.1% over the longer term, with the “core tendency” a range of 4.0%-4.3% That would be their estimate of “full employment.” Neither the Fed nor the market expects unemployment to return to anywhere near full employment within the forecast period, and the market is noticeably more pessimistic about it than the Fed is. Don’t forget about the “dual mandate” – even if they hit their inflation target, they can’t raise rates if they’re so far away from their unemployment target. And as Powell pointed out in the press conference, unemployment was below 4% for two years and there was no sign of inflation, meaning that even if unemployment does fall faster than they expect, that would not necessarily be a reason to tighten policy.

The above-target unemployment and below-target inflation justify keeping rates at zero throughout the forecast period. The “dot plot” reflects that consensus:   everyone agrees that rates will be unchanged at the current level this year and next. In 2023 one person thought there was a 50% chance of one rate hike, and one optimistic soul thought there was even a chance rates might go back up to 1.125%. – three rate hikes and a 50-50 chance of a fourth. 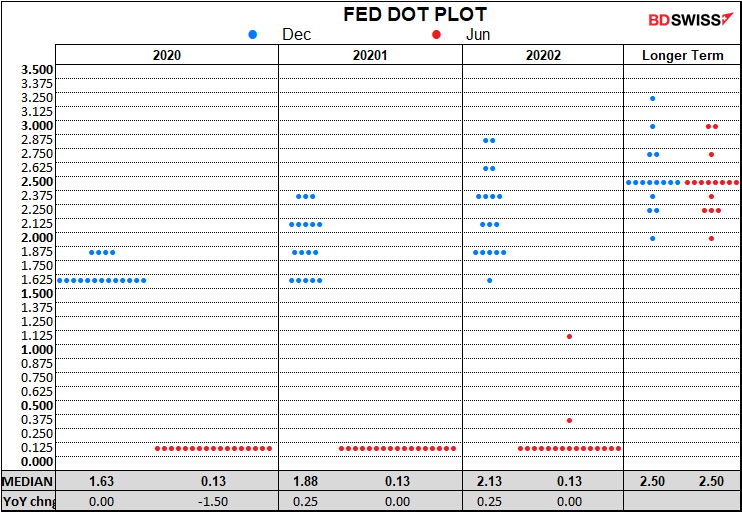 There was no discussion of negative rates. In the press conference, Powell said the Committee “continued our discussion of approaches for conducting monetary policy when the federal funds rate is at its lower bound.” He mentioned that they discussed “explicit forms of forward guidance and asset purchases” and “targeting interest rates along the yield curve” i.e. yield curve control (YCC). It was noticeable that he didn’t mention anything about negative rates here. On the contrary, he referred several times to rates currently being at “the lower bound.” So the Fed’s next move, if necessary, would probably be to join Japan and Australia in implementing YCC.

The Committee members’ estimates of the long-run neutral rate were virtually unchanged. The noticeable point is the narrowing of the range of estimates – the range between the low and the high rate in the “central tendency” was only 20 bps, vs 50 bps a year ago and 100 bps or more before that. 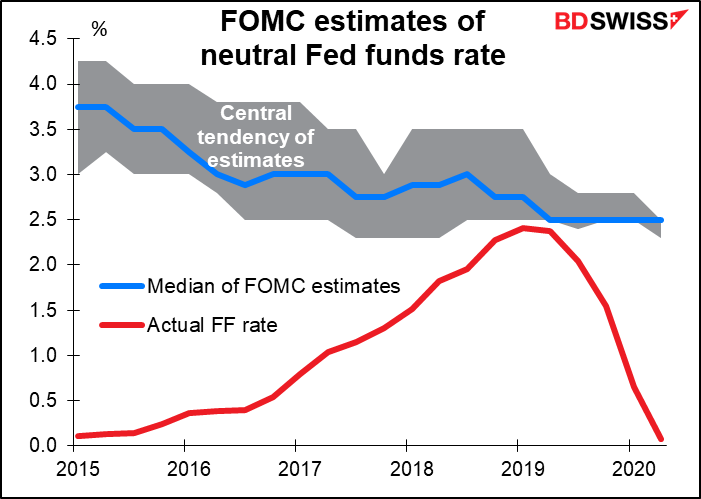 The Committee also didn’t change its forecast for the long-run rate of growth of the economy or unemployment. This implies that even if they see the pandemic affecting the economy for the next several years, they don’t see it having a permanent effect. Powell explained that he expects the economy to return to normal eventually “…with measures that keep people in their homes, that support hiring, that support growth, that avoid unnecessary avoidable business insolvencies…”

If you want to read a transcript of Powell’s press conference for yourself, it’s available here.

Market reaction: the S&P 500 went shooting up after the statement was released, but then gradually came down afterward to end the day slightly lower. This morning virtually all Asian markets are lower. Partially it may be because of the lack of any optimism in the Fed statement or the press conference, during which Powell emphasized the severity of the unemployment situation.Partially it may be related to the recent rise in COVID-19 cases, both worldwide and in the US, where some states that have recently lifted their lockdown measures have seen a recrudescence of the virus – the first signs of the dreaded “second wave.” New cases hit a record in Texas, for example. 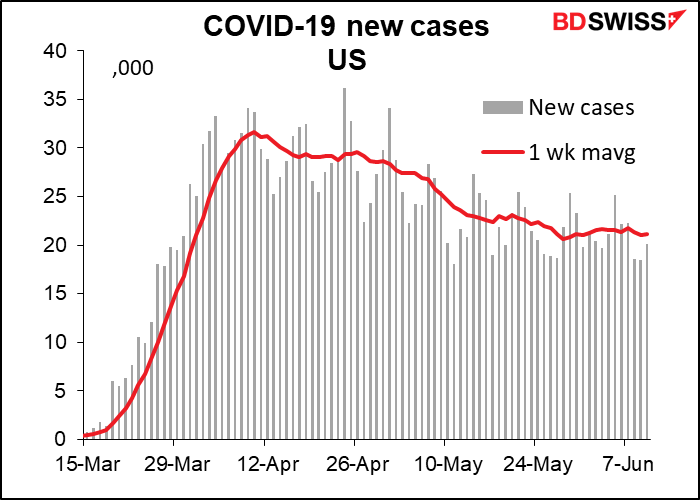 The risk of a second wave outweighed the Fed’s “zero forever” message and the FX market took a distinctly risk-off mood, with a typical reaction:  JPY and CHF were the main gainers and the commodity currencies were the main losers one, two and three. Net net the dollar was little changed, both on a trade-weighted basis and looking at the DXY index.

I don’t think the US producer price index (PPI) is going to be particularly market-affecting. Nonetheless, it is important as it’s likely to show increasing deflationary pressures in the economy. If these deflationary pressures intensify and inflation expectations fall even further, the Fed might be enticed to increase its bond purchases or even – shock horror chaos – institute negative rates (which I doubt it will do, but never mind). Today’s data are expected to show the PPI just ratcheting down a notch. 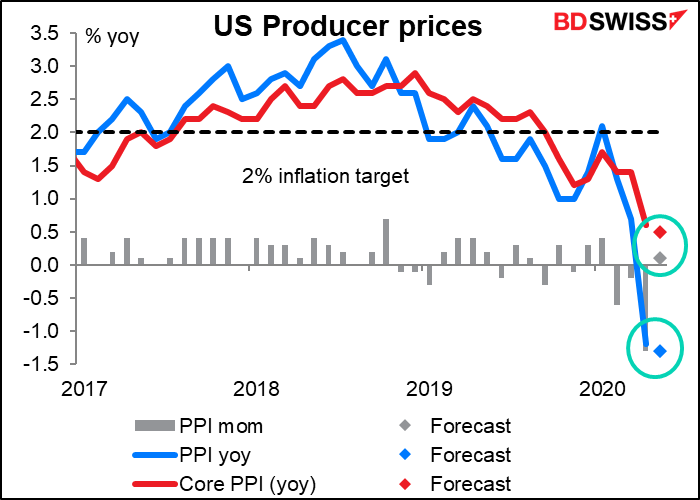 Now we come to the biggie of the day (maybe the week, too): the weekly jobless claims.

The market assumes that initial claims will continue to fall at about the same pace as they have been falling. The consensus forecast of 1550k is down 325k from the previous week, almost exactly the average of the last four weeks (-327k). That’s as good a guess as any, I’d say. 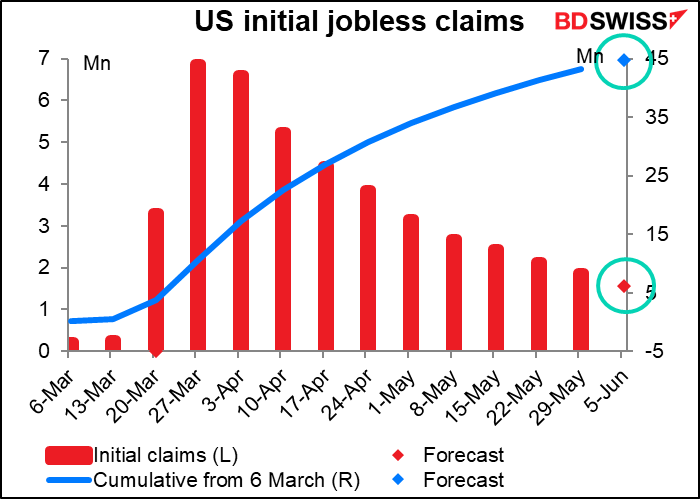 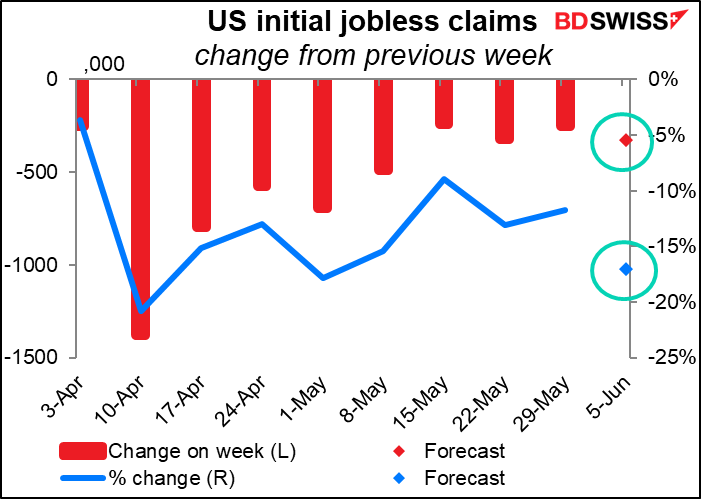 Continuing claims are expected to fall as well (-887k). If so, that would be a good sign that despite the astonishing number of people losing their jobs, people are still getting new jobs and leaving the unemployment rolls. 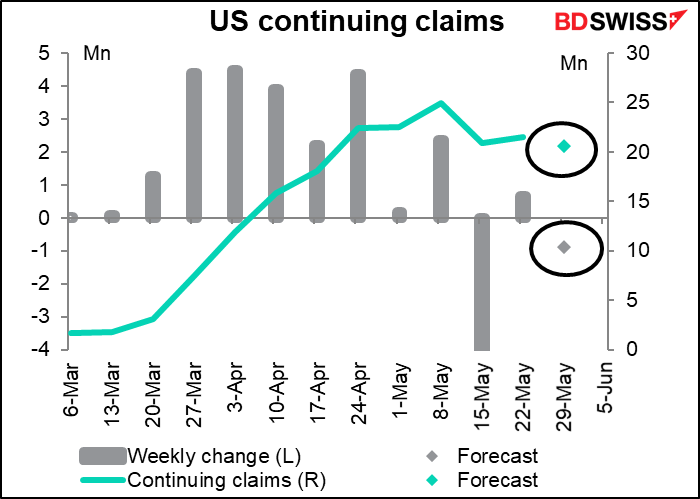 Overnight there are two indicators from New Zealand that seem important from the rankings they have on Bloomberg – the manufacturing PMI and change in food prices — but there are no forecasts.

So then we wait until the early hours of the morning for short-term indicator day in Britain! The Office of National Statistics (ONS) releases a bunch of statistics all at once that give a snapshot of how the economy is functioning right now.

The most important of these is of course the monthly GDP figure. But as it’s all for April, it’s likely to be the usual 50-sigma event that we’ve seen so much of for the month. The market consensus is for an unheard-of 18% mom drop in GDP. I’m not even going to draw a graph, because as usual it would be one of those graphs with basically a straight line parallel to the “X” axis followed by a straight line parallel to the “Y” axis. The key question is not April but May – will April turn out to be the trough? So far the indications, such as from the purchasing managers’ indices, are yes, April was the bottom.

Same with industrial and manufacturing production, I’m afraid. There’s no point in drawing these graphs, which you’ve seen so many times for so many indicators now.

That leaves the trade data. This is OK so long as no one moves any gold around in their vault, as that can distort the picture immensely – note the trade surplus in late 2019, which probably arose because of an accounting change in the ownership of some gold.

The data are expected to show a slight narrowing in the trade deficit. We’ve seen this from other countries with trade deficits, as imports generally collapsed during the month. 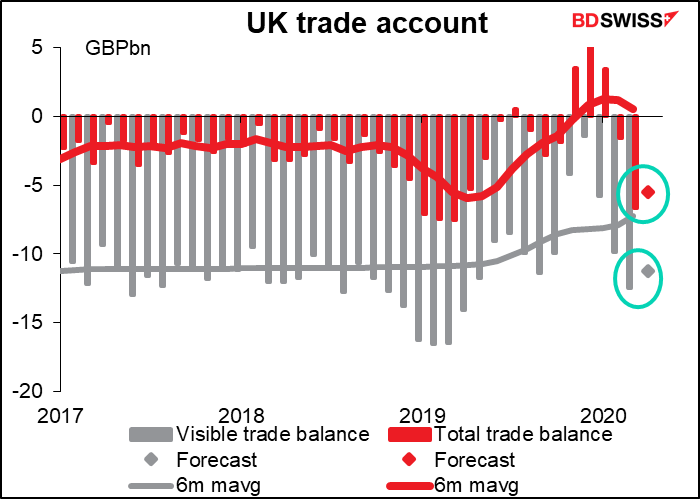 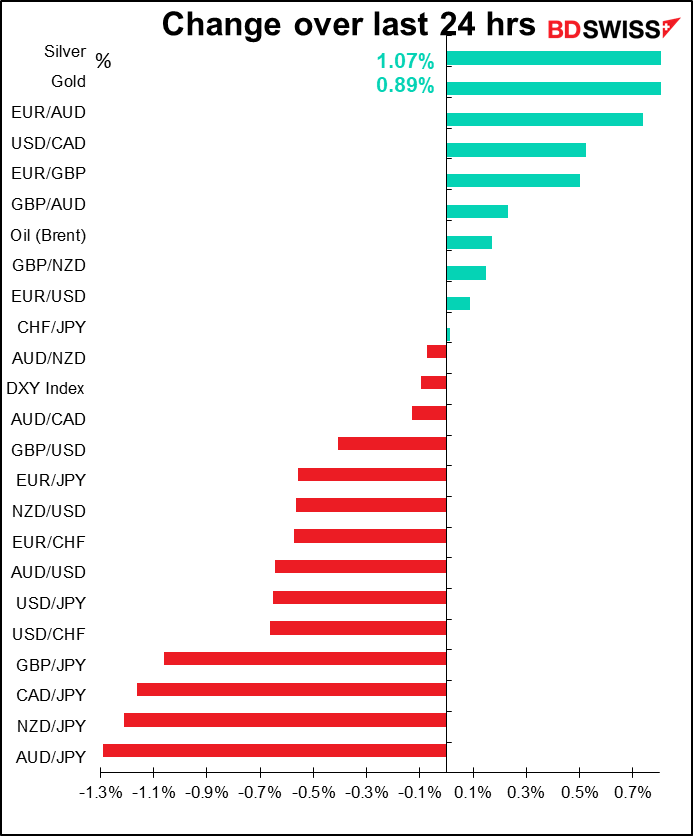