You are at:Home»MARKET PREVIEW»EUR Up on German Stimulus Package, AUD Down on Profit-Taking; ECB Meeting, Jobless Claims 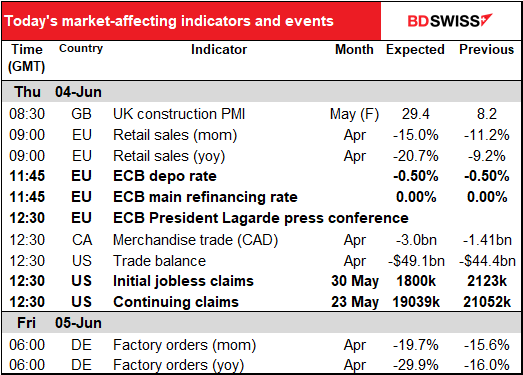 Evidence is mounting that perhaps the global economy is past the worst. Yesterday’s service-sector purchasing managers’ indices all gained, the Institute of Supply Management (ISM) version beat expectations, the ADP employment report showed a much smaller drop in jobs than expected (-2.76mn vs -9.0mn expected, -19.6mn previous), and the Bank of Canada echoed the Reserve Bank of Australia’s  optimistic assessment when it said the Canadian economy “appears to have avoided the most severe scenario.” 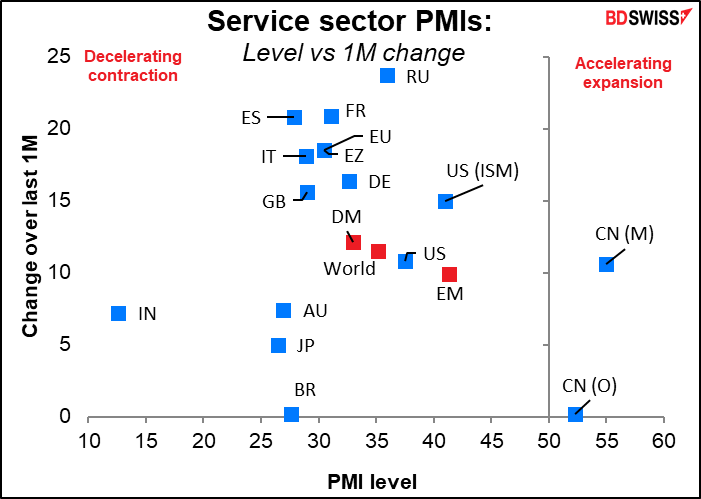 As a result, we had once again a generally “risk-on” day, with equities up, commodity currencies up, emerging market currencies up, and safe-haven assets such as bonds, gold, and in the FX market JPY and CHF, down.

Despite the risk-on tone, AUD came in for some profit-taking after the previous day’s tremendous surge. Instead NZD led the way among the commodity currencies. CAD was little changed as oil prices fell (see below).

EUR was the best performer ahead of today’s European Central Bank (ECB) meeting (see below). It was boosted by news that German Chancellor Merkel’s coalition has reached an agreement on a EUR 130bn stimulus package. The amount was 30% higher than the highest expectations.

GBP fell after the Bank of England warned in a public statement on their website that banks should be prepared for a “no-deal” Brexit as one possibility. BoE Gov. Bailey holds a weekly conference call with banks and this week he reportedly told them to step up preparations for such an outcome, which would probably endanger the financial health of many of their customers. The Bank apparently confirmed the reports in a statement on their website, although I couldn’t find it.

CAD was weaker going into the Bank of Canada (BoC) meeting but gained afterward as the Bank came out with a fairly optimistic conclusion (in the current context of course, when “annihilation of all humanity” is the baseline forecast). Like the RBA on Tuesday, the BoC said it had avoided the worst-case scenario, and boosted its Q2 GDP                               forecast from a projected contraction of 15%-30% to 10%-20% — that’s what passes for good in the current situation. On a more promising note, it said it expected growth to resume in Q3, and said it was paring back two of its market operations.

Nonetheless, CAD didn’t enjoy the same kind of bounce that AUD did when the RBA made similar statements. That could be because Canada has made less progress in squelching the virus than Australia has, which will hinder its effort to emerge from lockdown. It may also have been hit by falling oil prices.

Oil prices declined again yesterday. It was widely expected that OPEC+ would hold a virtual meeting today, but it got pushed back to the original date – June 9th & 10th – as Saudi Arabia and Russia want greater assurances that the other members, particularly Iraq, will hold to their commitments to cut back production. The Saudis and Russians are threatening to increase their production if the others don’t improve their compliance, which would definitely be negative for the markets. Furthermore, the agreement they seem to be discussing is only a one-month extension of the cuts, from end-June to end-July, whereas before it appeared that a two-month extension might be in the cards.

Also, yesterday’s US oil inventory figures were disappointing. On the one hand, the headline crude oil inventory fell by 2.1mn barrels instead of rising by 3.3mn as expected. One might have expected that to be bullish for oil prices, but that just shows US producers are pumping less oil – if you remember the graph I showed yesterday, the number of oil & gas rigs in operation in the US has fallen to the lowest since records began in 1987. Still, that doesn’t seem to be enough, as inventories of distillates (finished products) are piling up – gasoline inventories were up 2.8mn barrels instead of falling by 2.4mn as expected, while overall distillate inventories were up 9.9mn barrels, much higher than the 3.2mn barrel increase that was expected. What this shows is that despite a dramatic cutback in production, US producers haven’t been able to match the even more dramatic cutback in consumption. 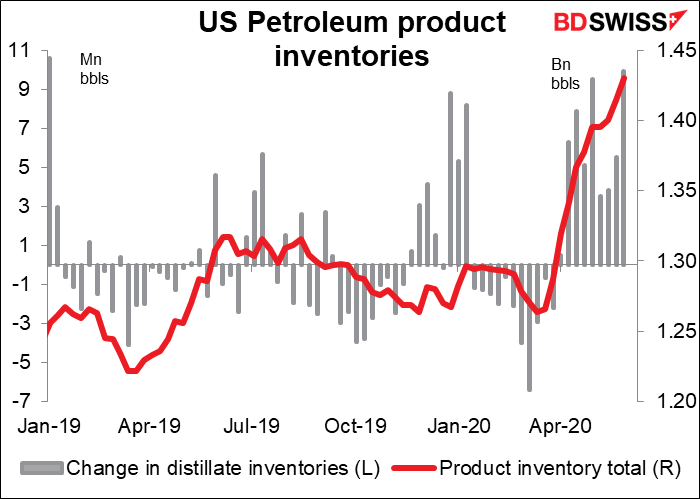 The big event of the day is the European Central Bank (ECB) Governing Council meeting. I wrote about it in great depth and detail in my weekly outlook. Just to sum up what I said there, there’s widespread expectation that the ECB will take further steps to ease policy at today’s meeting. A worse-than-expected plunge in GDP, inflation near zero  and a likely downward revision to the staff forecasts make this quite likely. 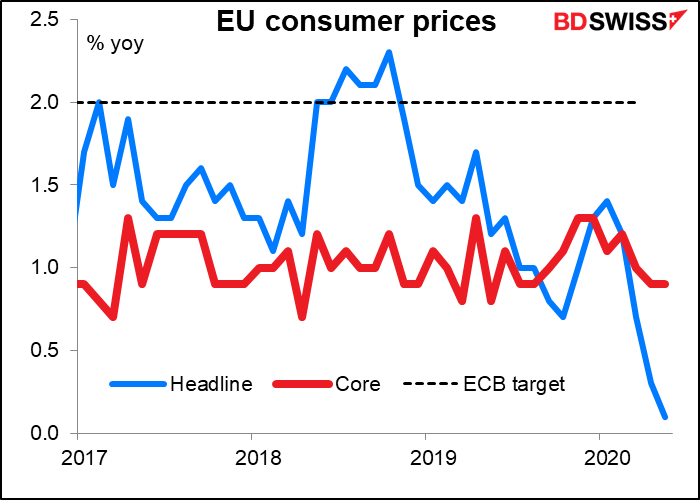 The move most widely discussed is a top-up of the ECB’s flagship EUR 750bn Pandemic Emergency Purchase Program (PEPP). Thanks to the German Constitutional Court ruling, the Bundesbank may have to leave the Public Sector Purchase Program (PSPP) on 5 August, and the PEPP could run out of money this fall even if the PSPP keeps going as is. The ECB will want to make sure that the PEPP has the necessary resources if they need to stop the PSPP (because the Bundesbank can no longer participate) use it to replace the PSPP.

Furthermore, the Governing Council may want to send a signal to the market that they won’t allow the German Constitutional Court – or any national court – to deter them from doing what they think is necessary to fulfill the ECB’s mandate. The move would also reduce the uncertainty caused by the German court ruling.  Some estimates in the market are for an additional EUR 500bn in the PEPP.

With the Eurozone economy worsening and the ECB constrained by the German court ruling, they will face a host of trade-offs and decisions if they need to loosen further. Accordingly, any change in the ECB’s forward guidance on rates will be of interest.

In any case, I think the FX market’s reaction to the meeting is likely to be rather muted. That’s because the market’s focus is on the fiscal response to the pandemic, not the monetary response. Everyone knows the ECB will do “whatever it takes.” The question is what the governments will do. All eyes are therefore on the 18-19 June EU leaders’ meeting, when presumably there will be a decision about the European Commission’s proposed “Next Generation EU” fund. The Governing Council could make some comments about their willingness to support the massive debt issuance that will accompany this EUR 750bn fund. That could be positive for the euro.

Finally, there could be some response to the German court ruling, although I don’t think they’ll even mention it – so far their view has been that it’s a matter for the Bundesbank, not the ECB.

As for the indicators, I’m not going to bother with a graph of EU retail sales, which is likely to be another indicator to register a record decline in April.

Canada’s merchandise trade deficit is expected to widen significantly. Not only are oil prices plunging, but Canadian auto production fell to zero for the first time after producers shut down operations in mid-March. Energy accounts for some 21% of Canada’s exports and autos are 14%. 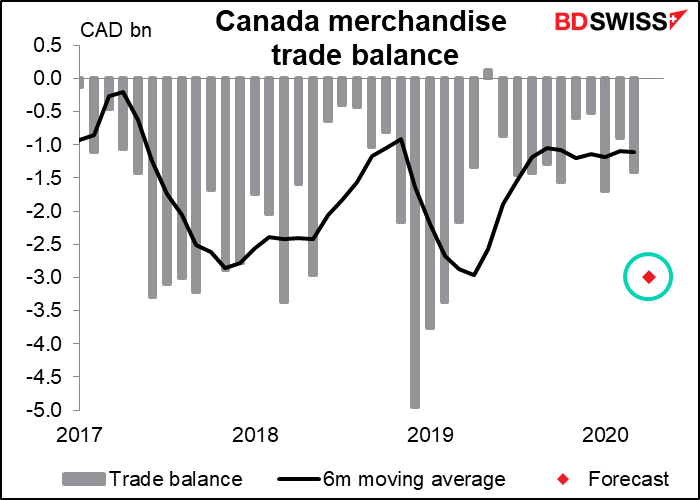 Both exports and imports were plunging in March. No forecasts are available for April. 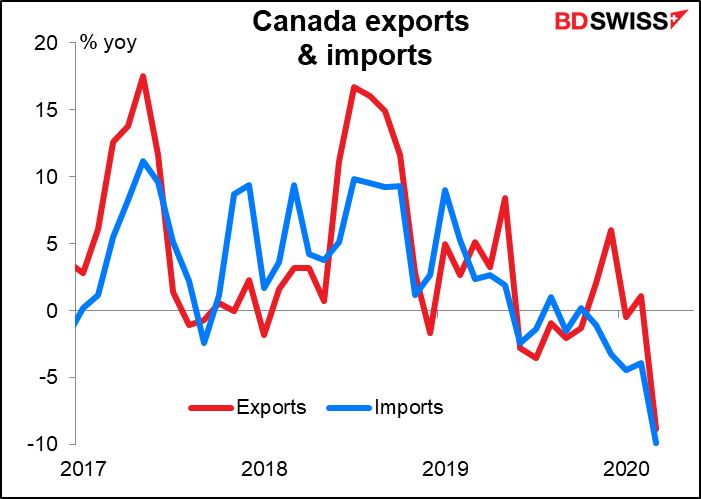 The US trade deficit is expected to widen too, but that was totally adumbrated in the advance trade balance. This is to be expected, since the services balance doesn’t vary that much (range of $1.5bn over the last year). 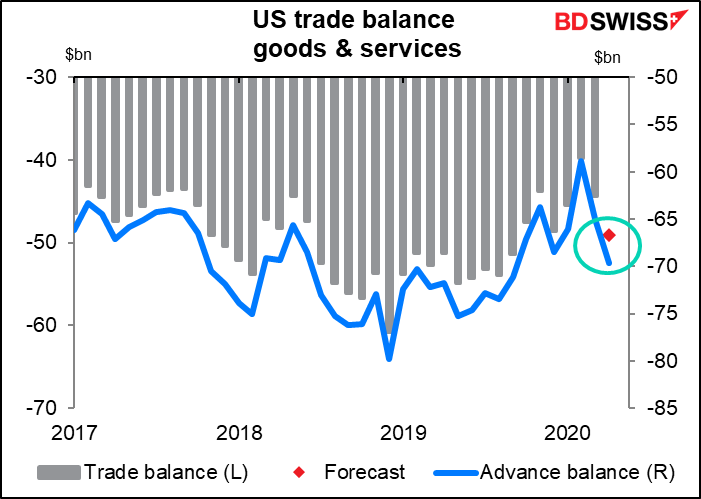 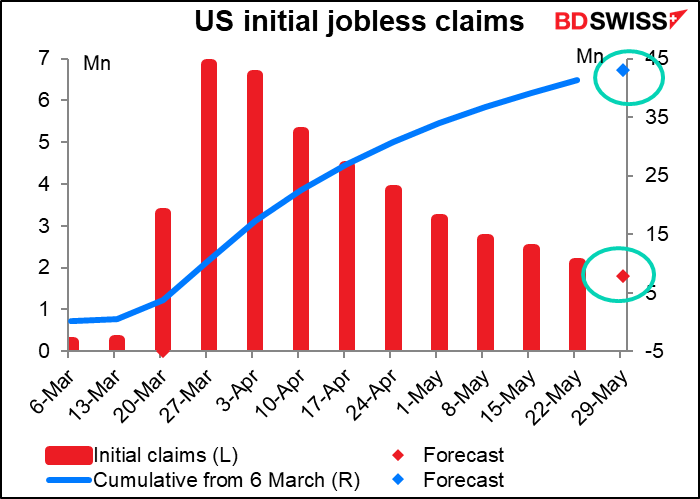 If we look at it in terms of change from the previous week instead of level, the market is forecasting that jobless claims this week will fall exactly as much as they did the previous week. I suppose that’s as good a guess as any. 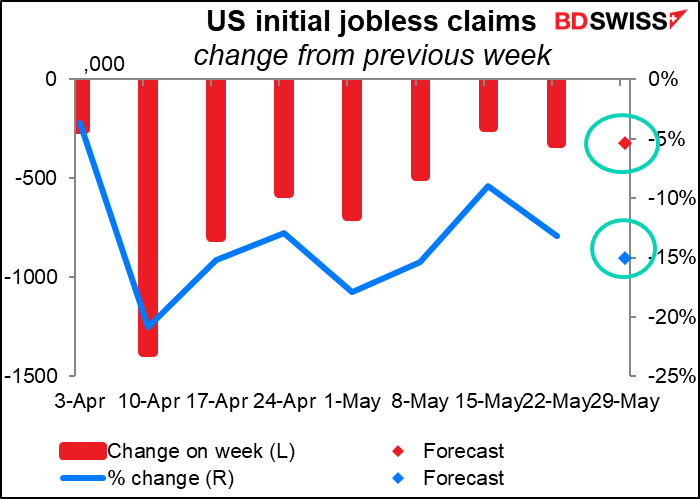 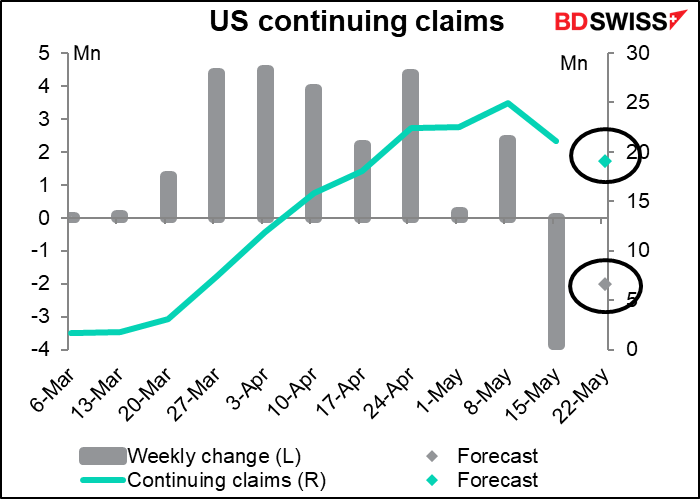 Then early tomorrow morning, Germany announces its factory orders. This is usually an important indicator, but it’s for April, and as we’ve long since known just about every April indicator is destined to be the worst since the Etruscans and probably since the Sumerians. This one is no exception. Once again I’m not going to bother making a graph, because like so many others it would just consist of two lines at right angles. Anyway it’s going to be terrible, but all eyes are on where we’re headed, not where we’ve been. 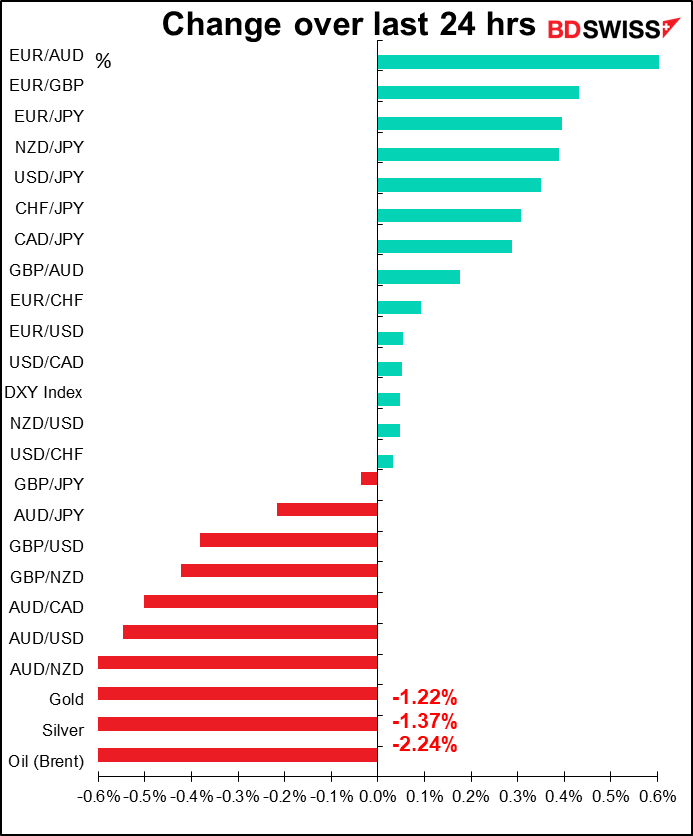