You are at:Home»MARKET PREVIEW»EUR Up as ECB reduces Eurozone Breakup Risk; US NFP, Canada Unemployment 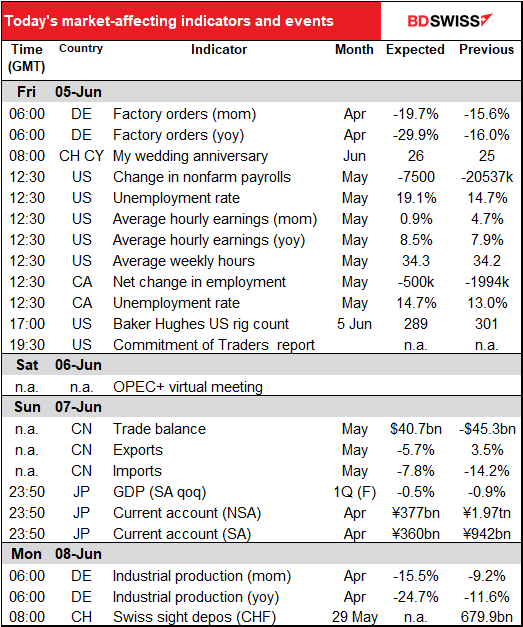 It was generally a “risk-on” mood in FX yesterday even though US stocks struggled and closed lower.

EUR led the pack, paradoxically because the ECB announced a more-dovish-than-expected program. It increased the size of its Pandemic Emergency Purchase Program (PEPP) by EUR 600bn, vs market expectations of EUR 500bn, and extended the program until at least June 2021.  The Bank said it will also reinvest maturing principal payments until the end of 2022. 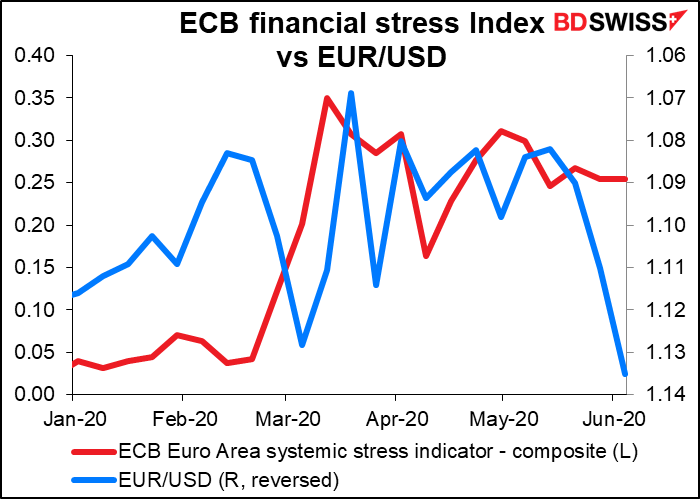 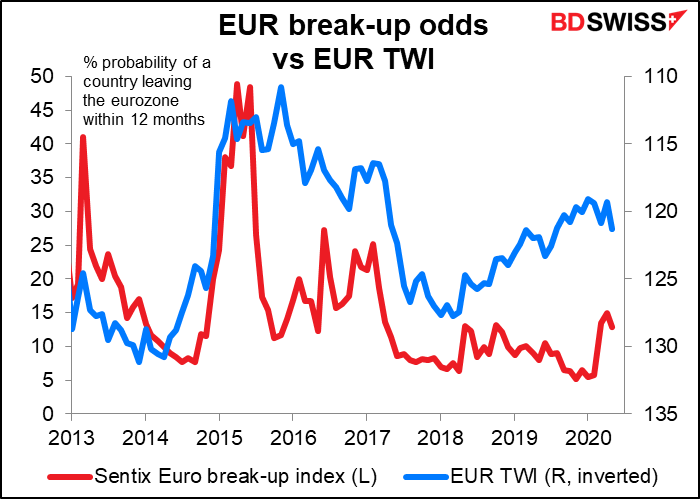 The commodity currencies generally gained except CAD, which lagged ahead of today’s Canadian jobs report and a further rise in unemployment (see below).

It’s clear that USD is trading as a safe-haven asset as once again it falls when the market is risk-on.

OPEC+ was supposed to hold a virtual meeting yesterday, but it got delayed. Saudi Arabia and Russia were refusing to extend cuts while other members, notably Iraq, weren’t complying with their agreed-up production cuts (Iraq had cut production by only about half what it had agreed to). But overnight everyone seems to have reached an agreement, and the meeting will be held on Saturday. The tentative deal means OPEC+ will extend its production curbs for another month, until the end of July. Oil gained slightly on the news as it reduces the risk of a breakdown in the agreement.

It’s nonfarm payrolls (NFP) day today! As you can imagine, the figure is expected to be disastrous, even if it’s not as disastrous as it was in April. Payrolls are expected to shrink by 7.5mn people, with the unemployment rate soaring to 19.1%. This is maybe better than 20.5mn who lost their jobs in April, but saying that is like playing a game we used to play when I was a kid:  which would you rather do, sit on a hot stove or drink a glass of boiling water? Jump into a pit of spiders or snakes? Etc. 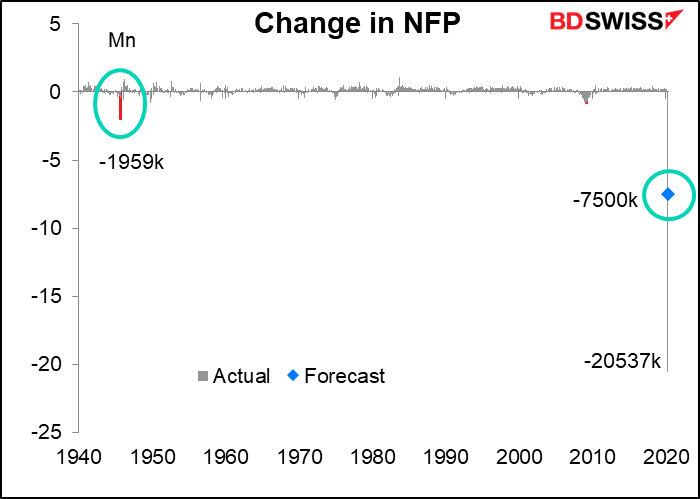 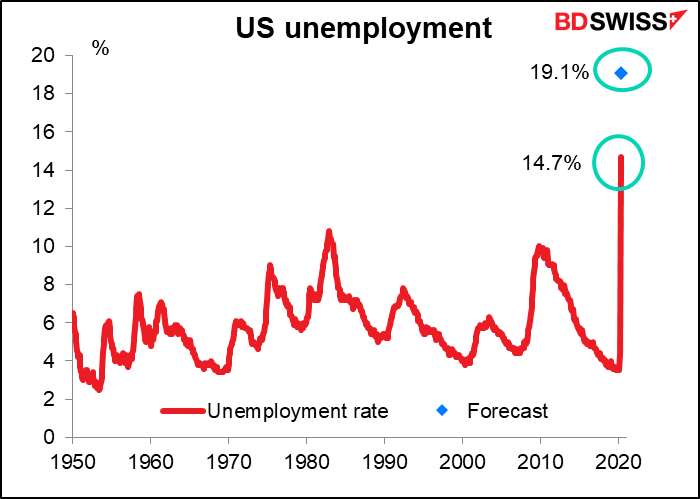 I wonder though whether the NFP is still as significant as it once was or whether the weekly jobless claims are more closely watched now as a more up-to-date indicator of what the US employment situation really is.

I doubt if there will be much interest in average hourly earnings. This used to be the most important part of the monthly NFP data, IMHO, because once the US was at what the FOMC members considered to be “full employment” (remember back then?) the next thing to watch for was upward pressure on wages, which would be the start of inflation. (This is another bit of economics I know that is going to be useless for the foreseeable future.) Now we have “average hourly earnings” soaring, but it doesn’t really reflect higher wages – rather, it reflects more people at the bottom end of the wage scale losing their jobs, which pushes up the average. In other words this is bad. Not what we want to see. 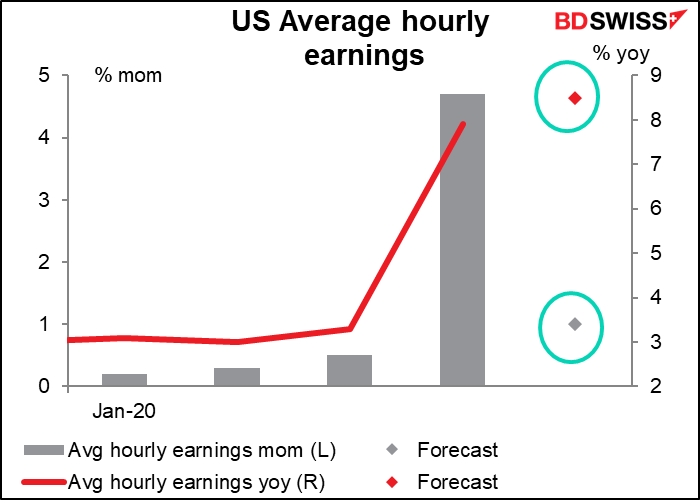 I’m really surprised to see average weekly hours holding up so well. I guess it’s binary:  people are either working or not working, not working shorter hours. 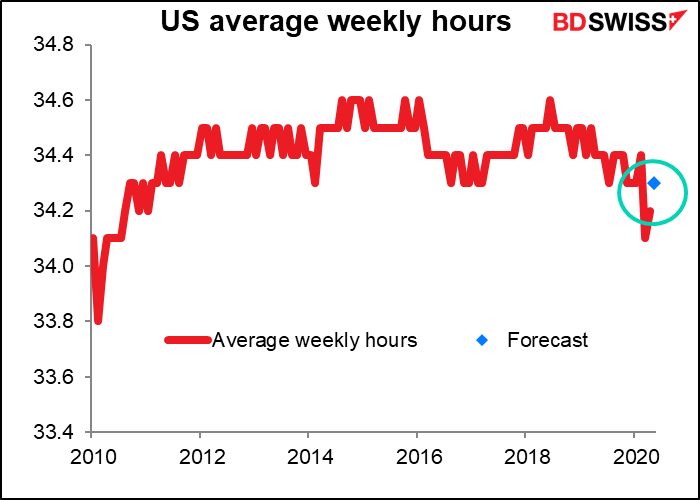 Canada’s unemployment rate is expected to soar and the net change in employment to fall by 500k, the second-largest decline on record. Although that’s only one-quarter of the 1.99mn decline in April, it would still be a large jump.. 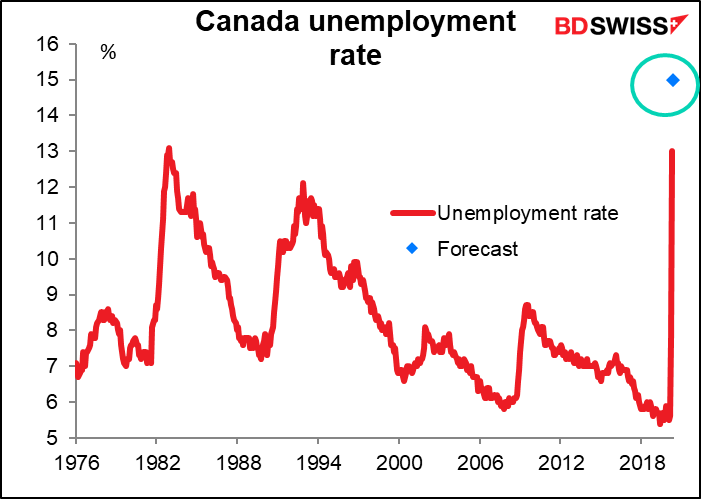 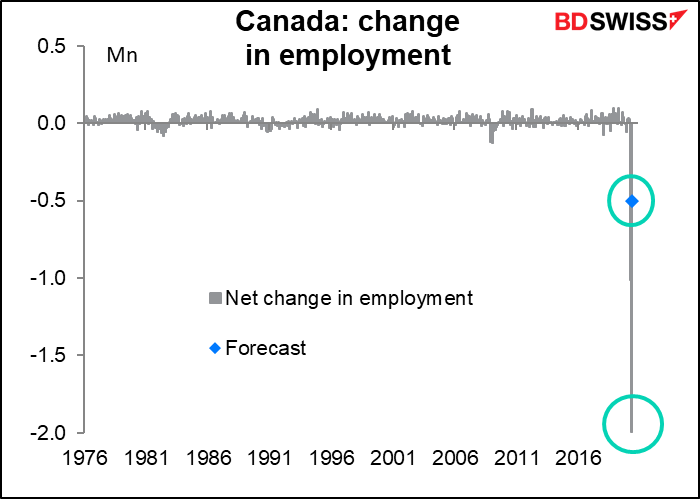 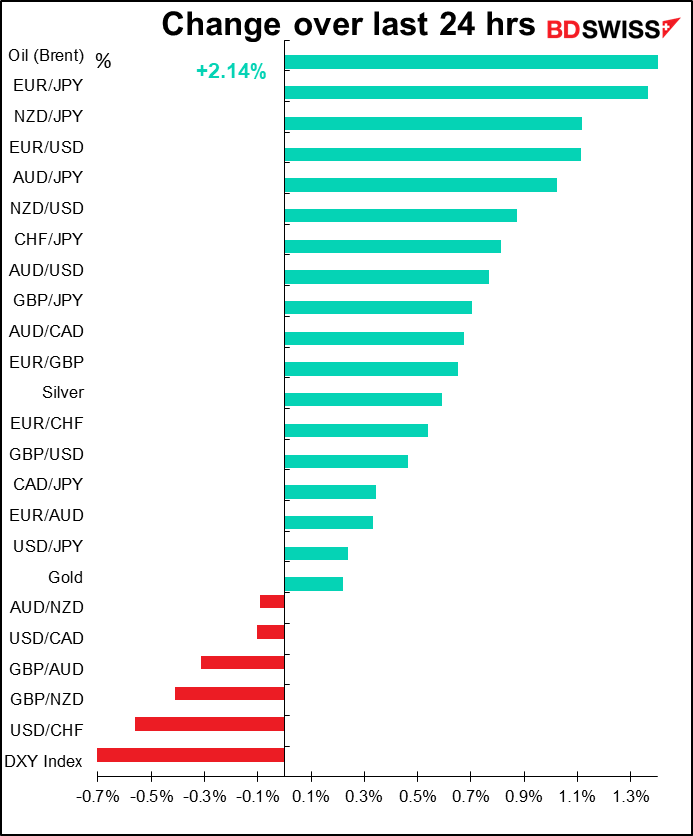