You are at:Home»MARKET PREVIEW»Reflation Trade Across the board as Democrats take Senate; EU CPI, Initial Jobless claims 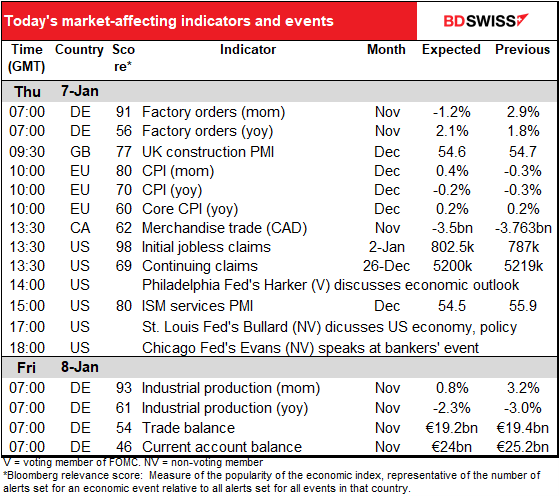 There’s so much I could say about the US politics overnight, but this is a foreign exchange comment, not a US political comment. So just one picture from inside the Capitol Building. 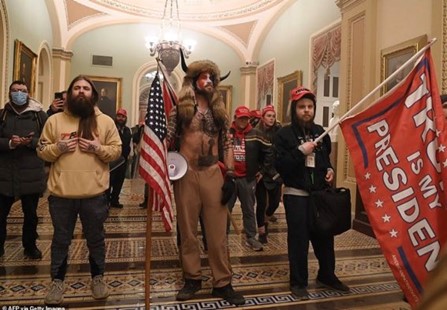 In the wake of this unprecedented event – this coup attempt incited by the President  – there is talk of removing him from office even though he’ll be out soon anyway. Axios reported that “ confidants and Republican officials are considering drastic steps to stop” Trump. “These measures include censure, impeachment or invoking the 25th Amendment,” which enables the Cabinet to declare a president “unable to discharge the powers and duties of his office” and replace him with the Vice President. Several business groups publicly called for this. TV journalist Margaret Brennan reported that “Trump Cabinet secretaries are discussing invoking the 25th Amendment. Nothing formal yet presented to VP Pence.” “I’m talking about actual members of the Cabinet,” she said.

Censure would clearly have no effect. Impeachment would take too long. The 25th Amendment though could be invoked quickly. Although these people are long-time Trump loyalists, it is possible that this insurrection was just a bridge too far even for them. The National Guard wasn’t deployed initially to quell the riot, but eventually VP Pence approved the order to call them out. This is significant, because the VP doesn’t have the authority to call out the National Guard – the President, who is Commander in Chief, should’ve given that order. In effect, they may be implementing the 25th piecemeal.

Nonetheless, after everything that happened, 122 Republican members of the House – more than half the House Republicans – and six Republican Senators still voted to object to Arizona giving their electoral college votes to President-Elect Biden based on lies that were thoroughly discredited by the state’s conservative government leaders, including the governor, Attorney General and Supreme Court chief justice. Only 12 people dropped their objections following the invasion. (82 Republican members of the House voted against.)

They neither abandoned this pointless effort nor finished the voting yesterday, they still have several other states to go through today. The results will inevitably be the same, it’s all just theater and positioning for the next House election for most, for the 2024 Presidential election for others. Meanwhile four people died.

Best comment I saw on Twitter:  When does the lady with the dragons show up? (By Noel Casler, a New York City comedian and former assistant to Trump on the TV show The Apprentice.)

With all the drama on the ground, the drama in the markets was rather anticlimactic. The market mostly ignored the goings-on in Washington and focused on the events in Georgia, which gave the Democrats control of the Senate and the long-awaited “Blue Wave.” That generally gave a “risk-on” tone to the market, although it was tempered by the insurrection.

The main implication of the “Blue Wave” is a substantially larger US stimulus package once President-elect Biden comes to office ($2,000 per person vs the $600 currently planned) and a possible infrastructure spending plan later on the in the year. The news gave further support to the reflation trade. Treasury yields rose sharply, with 10yr yields rising +8bps to 1.04%, the first time they’ve been above 1% since mid-March, when the pandemic took hold and pushed yields to record-low levels.

As short rates held steady but long rates rose, the yield curve steepened, with the 2s10s curve hitting the steepest level in three years. Note that the 3m/2yr curve has remained within an 8 bps range since last April even as the 2yr/10yr curve steepened considerably. This is because people expect the Fed to keep short rates unchanged for at least the next two years, while long rates are moving up. 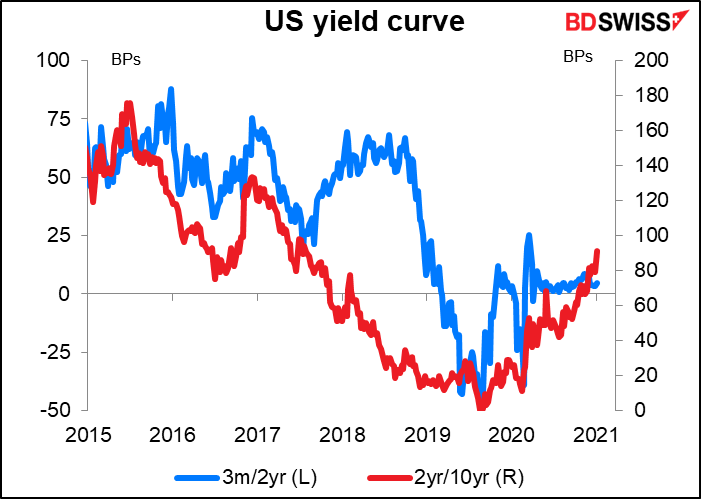 (Note:  I consider the 5yr/5yr inflation swap to be a better indicator of inflation expectations than the breakeven inflation rate. The latter is affected by liquidity in the US TIPS market. One of the reasons for the recovery is not just people’s thinking about inflation but also the  Fed’s intervention in the market. Nonetheless, the two do show the same general trend.) 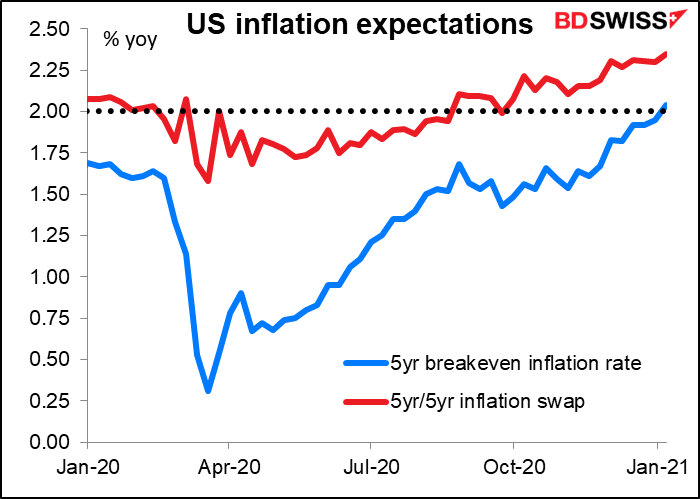 Nonetheless the S&P 500 finished up 0.6%, down from the intraday high of around +1.5%. The small-cap Russell 2000 though jumped 4% to hit a fresh record high.The NASDAQ however fell 0.6%, because it’s assumed the Democrats will pursue their fight to break up some of the tech monopolies.

The shift out of safe-haven assets into risk assets was seen almost across the board. European equities surged as well, with the STOXX 600 up +1.4% to a post-pandemic high led by banks.Both Brent and WTI oil also hit post-pandemic highs, while gold and silver fell. In European bonds, spreads of peripheral sovereign bonds over Germany narrowed sharply, with Italian spreads tightening to a four-year low and Spanish spreads to the tightest in over a decade even as yields rose across the board.

The move of course extended to the FX market as well, where the commodity currencies led the way and the safe-haven yen was the biggest loser. One mystery point though: CAD continued to weaken. It looks to me like it’s because of the widening spread of US Treasuries over Canadian bonds, although over the longer term that hasn’t prevented USD/CAD from moving lower (i.e. for CAD to gain on USD). With oil rising, I would expect CAD to gain today. 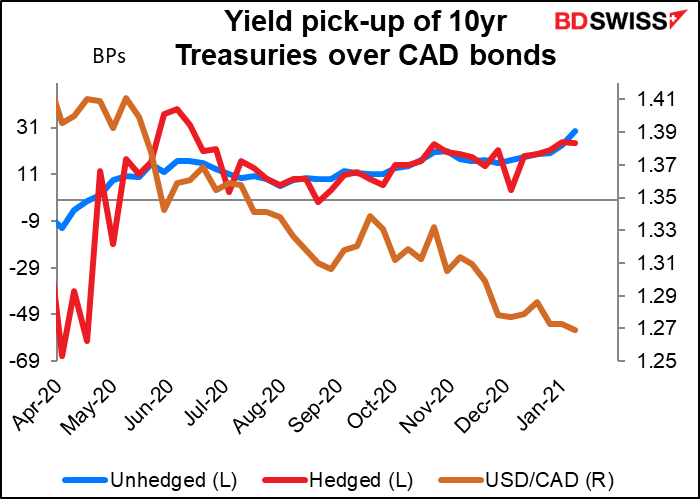 The minutes of the December meeting of the rate-setting Federal Open Market Committee (FOMC) showed that policymakers were increasingly confident about the outlook for the economy. Participants discussed the “resilience” of the economy, a “stronger than anticipated” recovery, and indications of potentially “greater momentum in economic activity than had been previously thought.” The tone of that discussion was broadly consistent with their improved economic forecasts in the Summary of Economic Projections (SEP). They even sounded somewhat more optimistic on the possibility of inflation returning back toward more normal levels.

The key question was what the discussions said about the new forward guidance concerning their asset purchases. All participants supported the guidance that the Committee would maintain the current asset purchase program until there had been “substantial further progress” toward the FOMC’s goals, but they didn’t spell out exactly what that meant. Participants generally noted that the judgement would be based on broad, qualitative criteria rather than specific numerical criteria, in line with what Fed Chair Powell said. That leaves the Committee with a lot of discretion. As a result, participants emphasized the need for clear communication before any change in stance. We can expect Powell to telegraph any change well in advance before the FOMC starts discussing tapering down its asset purchase program.

Yesterday we had the German consumer price index (CPI), so as day follows night, we get EU-wide CPI today. It’s expected to show a little bit less deflation at the headline level but the core CPI, which is what the European Central Bank worries about, is expected to stay at the same rate of change. Yesterday’s German CPI showed even less inflation than expected; prices increased 0.6% mom vs +0.7% mom expected, and fell -0.7% yoy, the same rate as in the month before, vs -0.6% yoy expected. 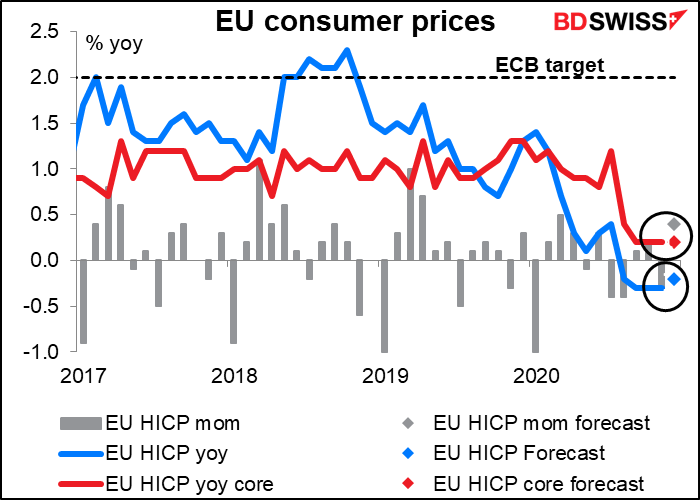 After that, we wait for the dreaded weekly US jobless claims. They’re expected to show a small increase after two weeks of decrease. Sigh. If you notice, the low was hit in early November (711k) rising to 892k in early December. That’s about what it was at the beginning of September (893k). So claims have basically been moving sideways for the last four months. Not a good sign! 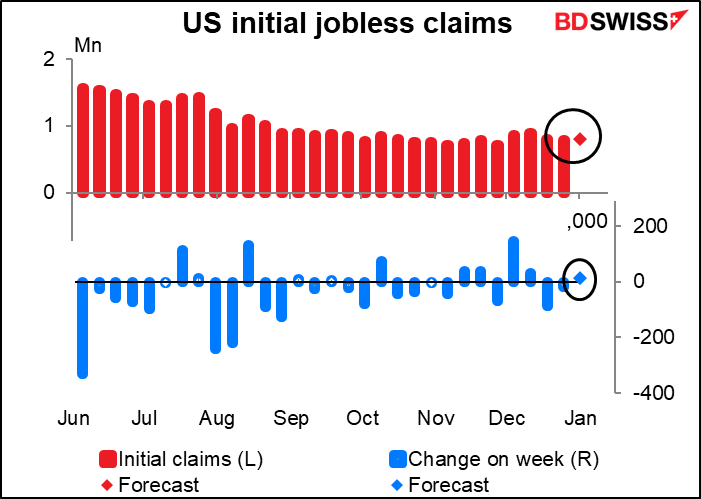 Continuing claims are expected to fall slightly, but as so many long-term unemployed are exhausting their benefits and rolling off the state unemployment rolls, this indicator has largely lost its significance. 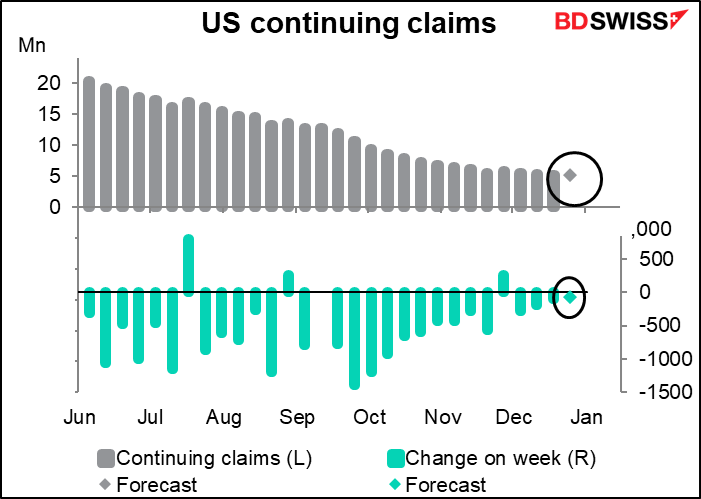 The Institute of Supply Management (ISM) service-sector purchasing manager’s index (PMI) is expected to fall a bit but remain in expansionary territory, which is good because as I’m sure you know most of the job losses during the pandemic have been in the service sector. Yesterday’s final version of the Markit service-sector PMI for the US was revised down sharply to 54.8 from 55.3. That’s about the same as the consensus forecast for today’s ISM index (54.5). Although the two indices usually diverge, it wouldn’t be impossible – or a surprise — for them to be the same. It would confirm that the US economy continues to expand, but at a slower pace. 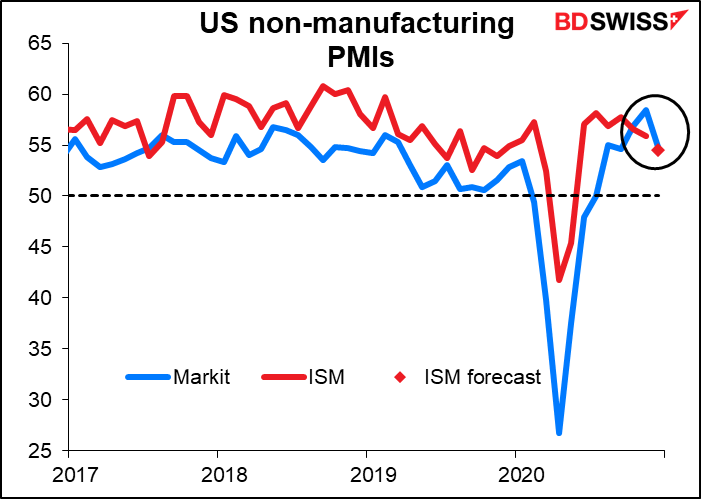 Then after that you could listen to what St. Louis Fed President Bullard and Chicago Fed President Evans have to say, but since they’re both non-voters, why don’t you skip it and go out to the pub? Oh sorry I forgot…

So really there’s nothing more for you to do but hit the hay and then get up early on Friday, when Germany announces its industrial production and trade data.

The German industrial production figure is probably the more important of the two, at least judging from the Bloomberg relevance score. It’s a barometer of economic activity in the economic engine of the Eurozone. It’s not expected to be that great, rather it’s expected to show the second-slowest growth since the big plunge in April.  Wednesday morning’s factory orders beat expectations significantly, rising 2.3% mom vs a fall of 0.5% expected. 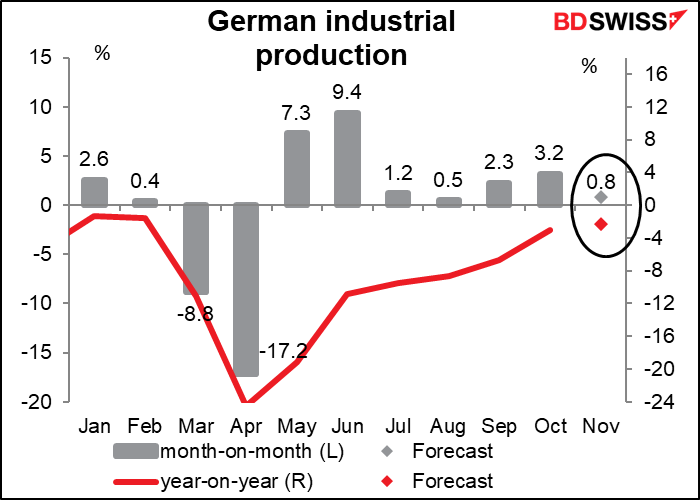 I don’t think that that’s much of a worry, because even that small rise will bring IP back to 3.9% below its pre-pandemic level, which is good compared to other countries. 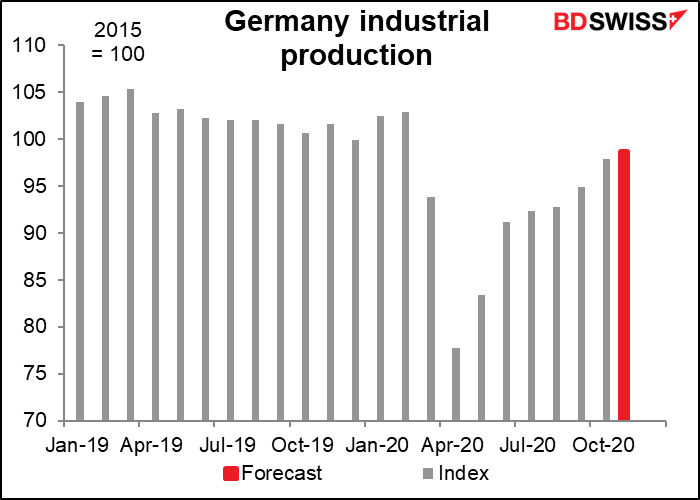 The German manufacturing PMI suggests that it’ll continue to improve in December, but with the country going into semi-lockdown in January, past performance is no guarantee of future performance. 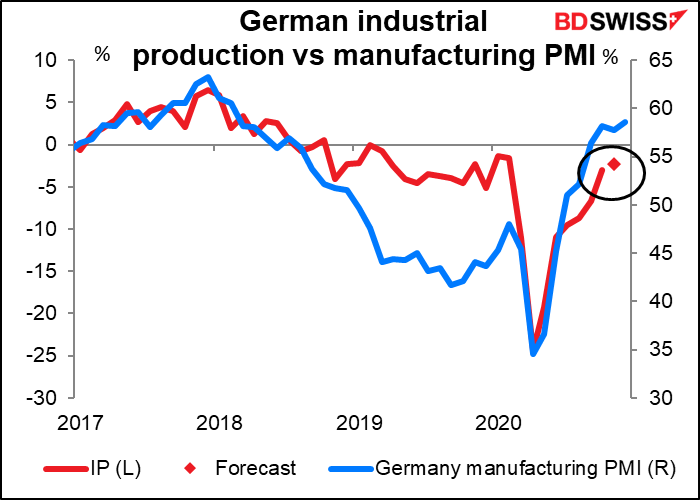 The German trade figures aren’t that closely watched, and in fact I shouldn’t even be discussing them, given my internal rule not to bother with indicators that have less than a 70 Bloomberg relevance score. However I still think trade & current account data are important for FX – maybe it’s just me showing my age. But since the German trade surplus accounts for almost all the Eurozone trade surplus – indeed, it frequently counts for more than the Eurozone surplus – I think it’s an important factor for the FX market to watch. 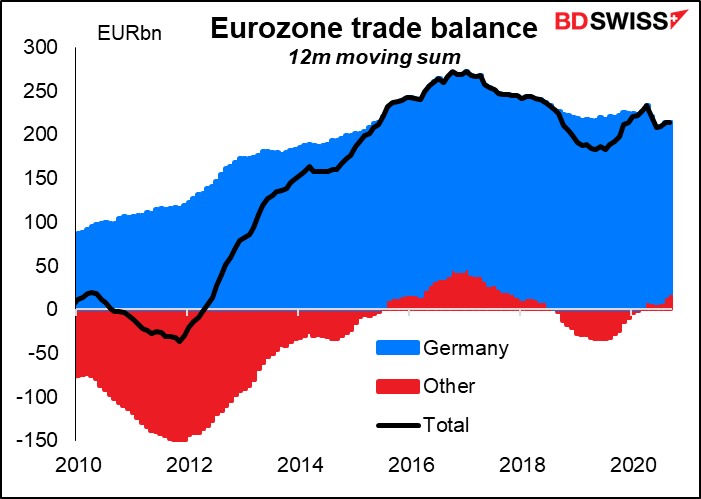 The German trade surplus has been rising recently. It’s expected to be more or less unchanged in October, as is the current account surplus. The news probably won’t affect the euro at this point, but it’s worth noting that the German – and hence the Eurozone — current account surplus is growing as world trade recovers. That’s positive for the euro in the longer term. 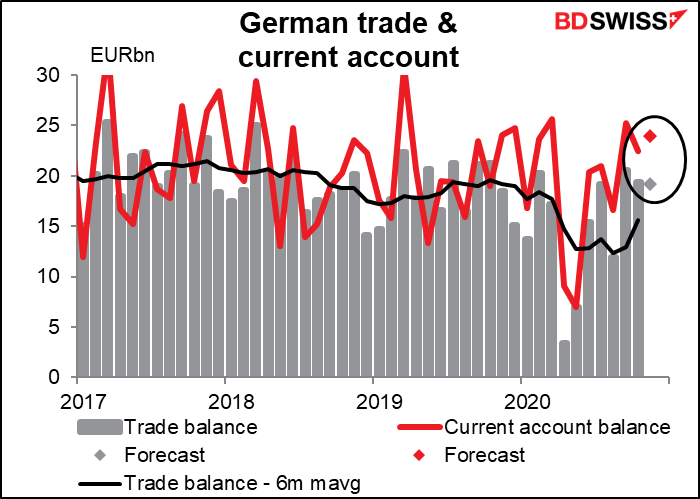 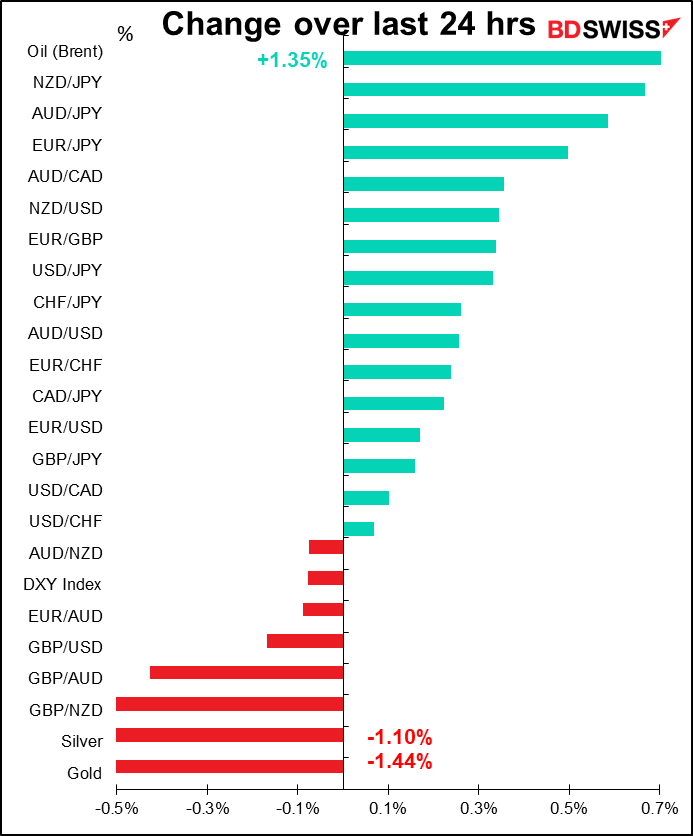