You are at:Home»MARKET PREVIEW»Commodity Currencies Up, Safe Havens Down as Risk Appetite Returns; ADP Report 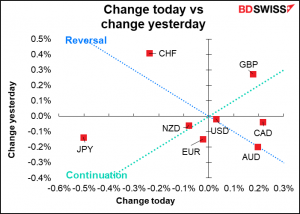 In the FX market, the safe-haven CHF, which has benefited from the risk-off environment recently, fell back, as did JPY, which hasn’t benefitted as much.

As I expected (pardon me if I toot my horn occasionally – I also admit my mistakes so it evens out over time) the commodity currencies recovered somewhat, although I think they should have further to go based on the rally in the commodity market. CAD clearly benefited from the higher oil prices, but AUD seems to be caught in a tug-of-war between the bullish commodity picture and the dovish monetary picture.

NZD however failed to follow along – on the contrary, it fell vs both USD and AUD. This is as clear a case of “buy the rumor, sell the fact” that I’ve ever seen. The Bloomberg story said “Buying of New Zealand’s dollar dries up after the central bank announced its expected rate hike…”

Why might that have been? The tone of the statement was certainly hawkish: they dismissed concerns about near-term disruptions to activity from virus-related restrictions, said that bottlenecks “are likely to be short-term,” (although they admitted there was a “risk that these become more persistent”), and argued that “the level of house prices is currently unsustainable.” And they were certainly clear enough about their intentions to hike rates further.

That being said, the RBNZ was perhaps more ambiguous on the pace of future rate hikes than the market was looking for. They said, “…further removal of monetary policy stimulus is expected over time, with future moves contingent on the medium-term outlook for inflation and employment.”

However, I believe this is just the normal caution of central bankers, who dislike pinning themselves down in any case and particularly now when the course of policy depends so much on the unpredictable course of a disease. The RBNZ used a similar phrase in its previous hiking cycle back in March 2014 and wound up hiking at its next three meetings (“The speed and extent to which the OCR will be raised will depend on economic data and our continuing assessment of emerging inflationary pressures.”) Clearly this phrase does not preclude a rapid tightening of policy. I think the sell-off in NZD is overdone and it should recover gradually. 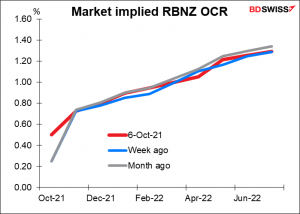 The real puzzle to me is why GBP is so strong. Britain is suffering the same sort of higher oil and natural gas prices as everywhere else (UK natural gas prices rose almost 20% yesterday alone), but it’s being compounded by the lack of truck (sorry, lorry) drivers to deliver gasoline. Other countries may be experiencing rising prices but at least gasoline is available. With inflation expectations up almost 100 bps so far this year (10 bps yesterday), the Bank of England faces a difficult policy conundrum: either countenance inflation far above their remit, or tighten rates before the economy has recovered. Or maybe they’ll choose the halfway policy of stagflation. 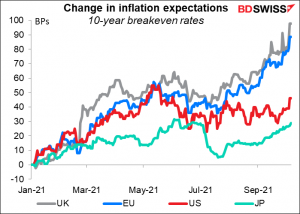 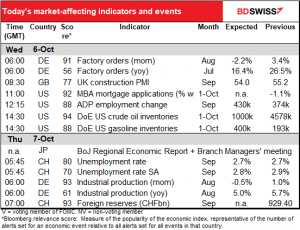 We’ve already had the German factory orders. They were much worse than expected, suggesting that European industry may be facing a slowdown in the months to come. This is a contrast with the Germany manufacturing PMI, which is still a robust 58.4 (I don’t have access to the new orders PMI, unfortunately.)

So now we wait for the ADP employment report. Automated Data Processing Inc. (ADP) is an outsourcing company that handles about one-fifth of the private payrolls in the US, so its client base is a pretty sizeable sample of the US labor market as a whole. It’s therefore watched closely to get an idea of what Friday’s US nonfarm payrolls (NFP) figure might be.

One point to note: the ADP adjusts its figures to match the final estimate of the NFP’s reading on private payrolls. It is therefore two steps removed from the headline figure that everyone focuses on, which is the initial figure for total payrolls, including government workers. So while it’s one of the best guides to the NFP that we have, it’s not perfect by any means – in fact, neither is the NFP figure itself, since it’s always revised.

In any case, the market is looking for an increase of 430k in the ADP report. 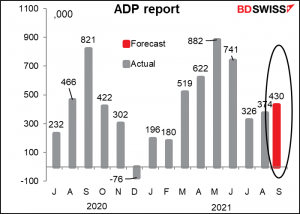 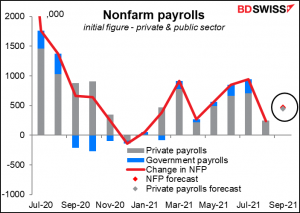 Of course as I always stress, the ADP report isn’t that great a predictor of the NFP – it’s just the best we have, although not very good. This year alone it’s been anywhere from 377k below the private payrolls figure to 404k above. That’s 185% above to 54% below. Not a great track record. 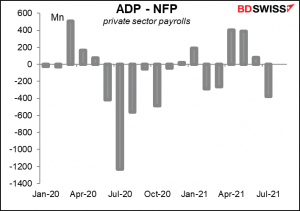 That’s about it for the European and US day.

Then early tomorrow morning, before I get this comment out, Germany announces its industrial production. This figure is likely to be depressed by supply chain problems. EG new car registrations were weak during the month, probably due to problems getting microchips that are limiting the number of cars that can be made. Furthermore the future doesn’t look too great because, as mentioned above, factory orders for the month were surprisingly weak. The fall in production could be negative for EUR. 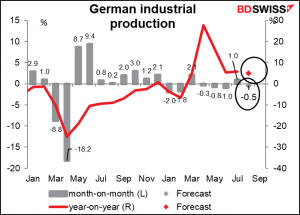 Then as dawn breaks over the Matterhorn, Switzerland announces its foreign exchange reserves (no forecast). I’ve pointed out many times though that the Swiss sight deposits are a better indicator of Swiss National Bank intervention than the reserves data are, because the value of the reserves is affected by exchange rate movements. But nobody listens to me and the reserves figure has a much higher Bloomberg relevance number than the sight deposits. 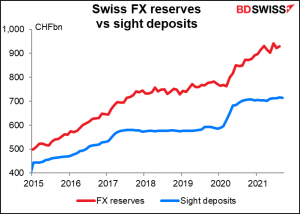 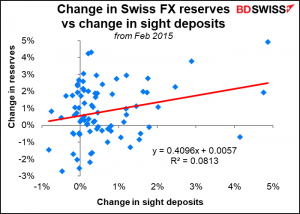 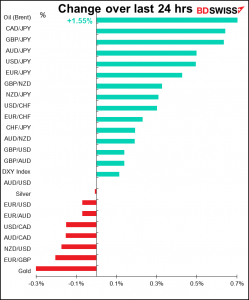