You are at:Home»MARKET PREVIEW»Natural Gas Prices Fall on Putin Comments; US Jobless Claims 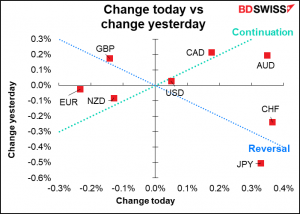 Is the furor in the energy market over? There were some dramatic moves in natural gas yesterday. Not so much in the US, but in the UK (red line below), natural gas was up 36.3% on the day at one point, only to close down 10.2%! That’s a wild move of 52% of the end price in just one day! US natural gas also fell 11.6% from its intraday peak. This sort of surge in price followed by a collapse often signals the end of a speculative blow-out.

The reversal may have been triggered by comments from Russian President Putin, who said his country could potentially export record volumes of natural gas to Europe this year. He didn’t specifically say how, but Deputy PM Novak said that one way to achieve it would be quick certification of the controversial Nord Stream 2 natural gas pipeline.

Bloomberg had a graph showing how supplies from Russia have been falling this year. September exports to Europe, Turkey, and China were down 12% yoy, according to Bloomberg calculations. Apparently the Russian heating season has started earlier than usual and domestic demand has increased. Nonetheless, the main European buyers of Russian gas say Gazprom has fully met its obligations under long-term contracts. 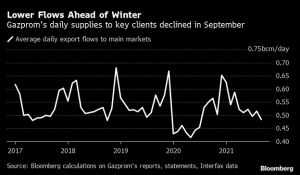 As gas prices came down, so too did oil prices, aided by the weekly inventory report from the US Dept of Energy, which showed inventories rising by a greater-than-expected 2.3mn barrels in the latest week (estimates 1.0mn). This makes two weeks in a row that oil inventories have risen. 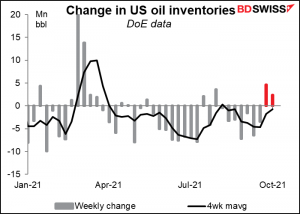 It was notable that CAD managed to gain despite the rise in oil prices. Perhaps people are looking forward to tonight’s speech by Bank of Canada Gov. Macklem?

CAD wasn’t the only baffling move in the FX market. It should’ve been a generally “risk-on” day, given the fall in oil prices and late recovery in stock markets (Euro Stoxx 50 was down 1.3% but S&P 500 up 0.41% and NASDAQ +0.47%). News that US Senate Democrats and Republicans neared a deal that would temporarily stave off a default on the government’s debts encouraged markets. The gap in yield between T-bills maturing before the 18th, when the US Treasury is likely to run out of money, and immediately afterward narrowed considerably, showing some confidence that a deal would be reached. 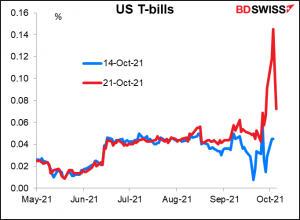 Yet the safe-haven CHF and JPY were two of the main gainers overnight. EUR/CHF weakened further and has now retraced the entire move higher since late August despite German 10y yields continuing to rise. 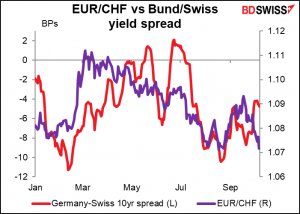 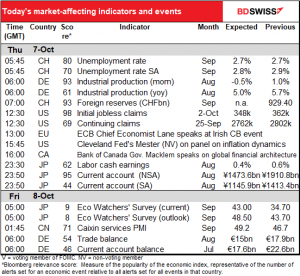 The first indicator we’ll talk about today is the dreaded US jobless claims.

Initial jobless claims are forecast to be down 14k. That would be great, because they haven’t been down for a while – the last three weeks, to be precise. In fact they’re back up to the level of early August. Not good!

However…things might not be all they seem. Apparently one of the main reasons why jobless claims have been rising is because California has been transferring “hundreds of thousands” of unemployed people from one federal program to another. That added over 17k to the unadjusted initial jobless claims a week for the last two weeks. There’s also some distortion caused by Hurricane Ida, which can’t be blamed on the economy. 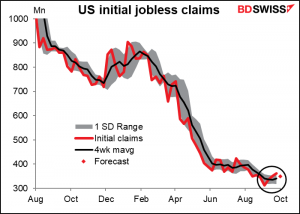 Continuing claims have been better behaved, although here too it’s been stop-and-go recently, or maybe I should say up-and-down, as continuing claims have risen three out of the last six weeks. The heartless Republican governors who decided to terminate their states’ Federal unemployment benefits early in the expectation that millions of lazy good-for-nothing plebs who are just sitting home collecting unemployment benefits while binge-watching Game of Thrones for the third time would be forced to get out and get a job have turned out to be wrong, wrong, wrong. 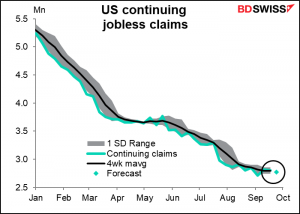 There’s also a conference on inflation (“Inflation: Drivers and Dynamics Conference 2021”) co-hosted by the Cleveland Fed and the European Central Bank, running today and tomorrow.

Overnight, Japan’s current account surplus for August is expected to fall on both a seasonally adjusted and unadjusted basis. Supply chain problems are eating into auto production. In September, six of Japan’s automakers revised down their production plans for the fiscal year (ending in March) by over 1mn vehicles. 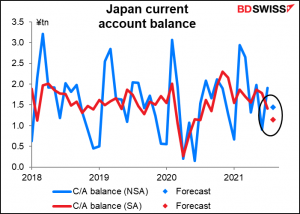 The problem stems from the shutdown of a STMicroelectronics plant in Malaysia. The factory supplies automotive microcontrollers to Toyota suppliers, but the re-emergence of the coronavirus has prevented employees from coming to work. Without the semiconductors, the component manufacturers can’t make their parts, and without the parts, the automakers can’t make cars. For want of a nail… 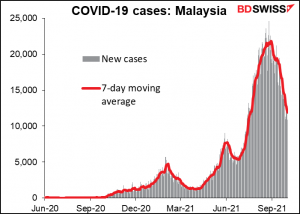 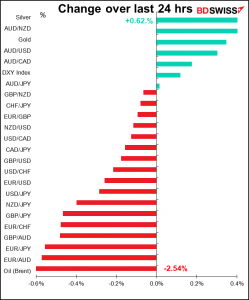