You are at:Home»MARKET PREVIEW»Commodity Currencies up, JPY down on COVID-19 treatments; US Consumer confidence, Kuroda Speech “Risk-on” continues as it seems there may be another medical breakthrough in the fight against COVID-19. The US Food and Drug Administration (FDA) is expected to authorize today pills from Pfizer and Merck to treat the virus. (Britain already approved the Merck treatment in early November.) Pfizer said that its pill, taken in combination with a drug used to treat HIV, reduced the risk of hospitalization or death by 89% in clinical trials when taken within three days of symptoms. Merck has said its pill can reduce the risk of hospitalization and death by 30% if taken within five days of the onset of symptoms.

President Biden gave a speech about the virus but didn’t make any major changes. The US will distribute virus tests free to Americans, create new vaccination and testing sites, and send some military medical personnel to help out in hospitals.

As the market turned optimistic about the virus, oil prices rose. The American Petroleum Institute (API) reported a 3.67mn barrel drawdown in US inventories over the last week, more than the 2.5mn bbl drawdown expected for today’s US Dept of Energy figures. 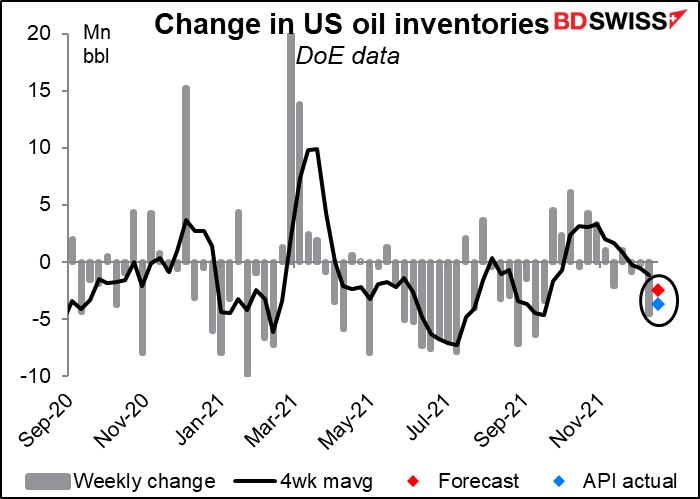 The news complicates monetary policy as prices rise but the economy weakens. If the European Central Bank (ECB) changes its mind about inflation and moves to tighten policy earlier, it could strengthen the euro. On the other hand, a tighter monetary policy won’t do anything to convince Russia to supply more gas so they may decide it’s not the correct tool in this case.

Elsewhere, the Turkish Lira (TRY) stabilized at a slightly stronger level after yesterday’s surprise move by the government. Other sources confirmed that this was the biggest one-day move ever seen in the FX market. You can tell your grandchildren: you were there! Moreover, the country’s 5-year credit default swap (CDS), a measure of the cost of insuring their debt against default, fell to 603.43 from 623.59. Personally, I don’t understand this. Everything I read agreed with my initial reaction: this is just the government writing a huge uncovered call option in USD/TRY that will leave them on the hook if the currency falls. Paying off depositors in case the currency falls will just force the government to borrow more and fuel the inflation that’s causing the currency to fall in the first place, as far as I – and anyone else – can see. But perhaps the market was impressed with the “circuit-breaker” effect and believes that now that the market has seen that TRY isn’t a one-way bet, more people will start buying. 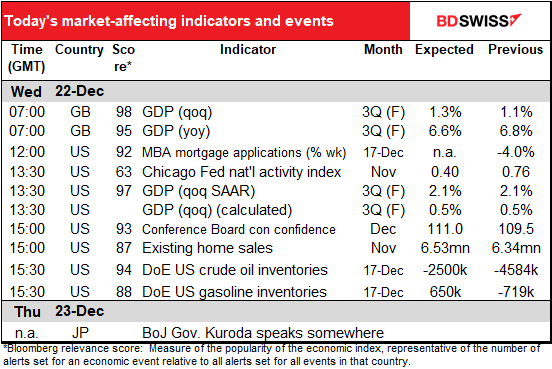 I haven’t posted a graph of Mortgage Bankers’ Association (MBA) mortgage applications in quite some time, so why not dust it off today? They’ve been quite high all year and are ending up high too. 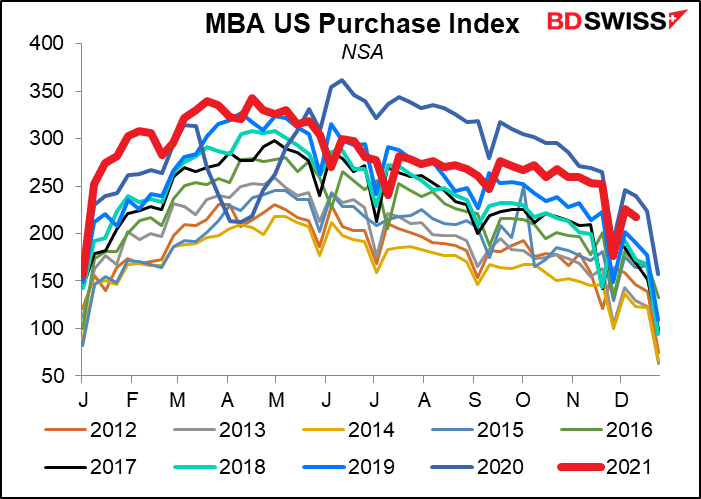 The third estimate of US Q3 GDP probably won’t cause that many waves. It’s ancient history by now, especially with the Fed changing its tune and the Omicron variant threatening the orchestra.

Conference Board US consumer confidence is expected to rise slightly. This would accord with the U of Michigan’s consumer sentiment index, which was up a bit in December. I wonder how long this will last though with the Omicron variant causing another surge in virus cases in the US. 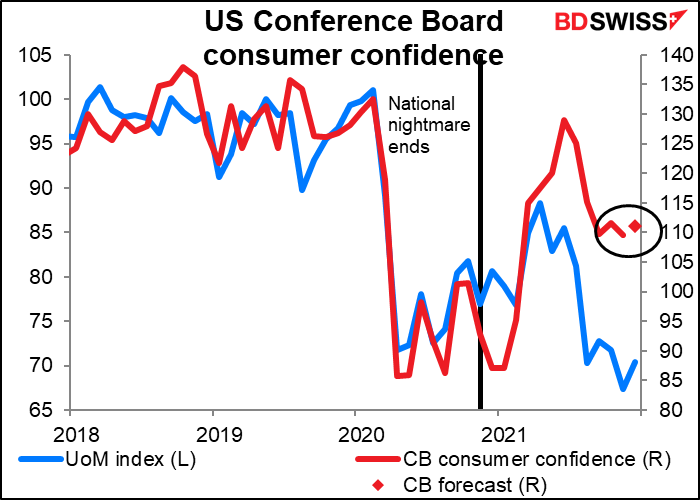 Overnight, Bank of Japan Gov. Kuroda will speak. It’ll be interesting to hear what he has to say. On Dec. 8, Deputy Gov. Amamiya gave a speech (Japan’s Economy and Monetary Policy) in which he explained why the Bank of Japan wouldn’t necessarily follow other central banks in tightening policy. Japan’s inflation rate is still far below the BoJ’s 2% target and the BoJ projects it will be around 1% even in FY 2023 (April 2023/March 2024). This contrasts with other central banks, where inflation is running well above target. Gov. Kuroda said basically the same thing in his press conference after last week’s Monetary Policy Meeting.

However…let’s look at the Bank of Japan’s decision last week to revise its special pandemic corporate financing support program. On the one hand it said it would extend its provisions for nongovernment-supported loans under its special pandemic funds-supplying operation by six months to September next year instead of allowing the program to expire in March.

On the other hand, funds for private debt pledged as collateral, a scheme introduced in April 2020, will be allowed to expire as scheduled in  March, as will its program to buy commercial paper and corporate bonds. It will subsequently revert to its pre-pandemic purchasing pace, gradually bringing the outstanding volume of CPs and corporate bonds back to their pre-pandemic levels of JPY 2tn and JPY 3tn, respectively, or JPY 5tn total. Those currently amount to JPY 11.4trn, so the BoJ’s action will mean a reduction of around JPY 6tn in its balance sheet.

The Bank of Japan has far and away the largest balance sheet relative to its economy of any of the major central banks and therefore has maintained the most accommodative stance from a stock point of view (although looking at the change in the size of the balance sheet, a flow basis, it was the Bank of Canada that had the biggest increase since the pandemic began). Last week’s move was a much bigger tightening of monetary conditions on the part of the BoJ than any other major central bank has announced. The Fed is just going to reduce the pace at which it buys bonds; it’s months if not a year or more away from beginning to shrink its balance sheet. Ditto for the ECB. The Bank of Canada too has decided to stop buying bonds but is planning on reinvesting maturity bonds, ie not yet shrinking its balance sheet. The BoJ is the first major central bank to announce “quantitative tightening.” How can the BoJ justify this change? In his press conference following the Monetary Policy Meeting last week, Gov. Kuroda explained that the BoJ buys corporate bonds with maturities up to five years. The BoJ’s holdings will therefore only decline gradually as these bond mature over the next five years. Still, “gradually” isn’t the same as “not.”

Probably because when the Bank began its “yield curve control” (YCC) program in Sep 2016, in which it pegged the 10-year bond yields to “more or less” 0%, the Bank effectively switched from a policy that emphasized the quantity of money to one centered around interest rates. Now with inflation rising and interest rates staying the same under YCC, real interest rates are likely to decline. That means monetary policy is getting easier regardless.

However, there are still a lot of people in the world who think that the quantity of money supplied (growth in the Bank’s balance sheet and narrow money) also has an impact on financial conditions. Gov. Kuroda will have to explain carefully what’s going on here and what the Bank intends to prevent the dreaded “confusion in the marketplace,” which is anathema in Japan.

If the BoJ really is moving away from the quantity theory of money, then the next step it might take is to revise the YCC policy sometime. It could expand further the range of movement it allows for the 10-year bond (currently ±25 bps) or it could shorten the maturity of the bond that it aims to control, thereby allowing the long end of the bond market more freedom to adjust.

We will be watching Gov. Kuroda’s speech for any change in views about the yen, the outlook for inflation in Japan, the BoJ’s strategy for raising inflation, and what might get them to go along with other central banks in normalizing policy. 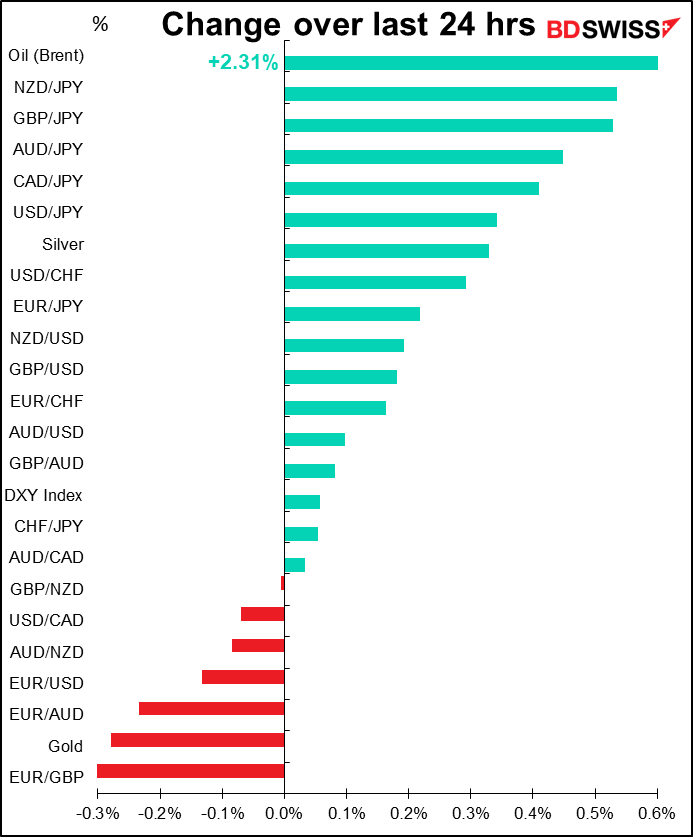