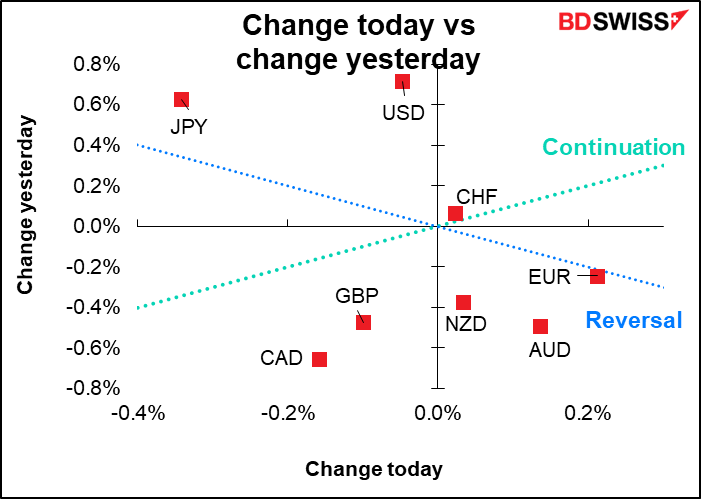 Remember I talked a few days ago about how a school of fish could change direction all of a sudden without any reason that’s immediately identifiable to the outside observer? Well to continue with the ocean analogies, yesterday was a sea of red in the stock markets, with the Euro Stoxx 50 down 1.3%, S&P 500 off 1.1% and NASDAQ down 1.2%. But this morning it’s a sea of green in Asian stock markets, with the Nikkei up 1.9%, Hang Seng +0.7% and KOSPI +0.6%. (Sorry for our Malaysian readers = Malay KLCI -0.03%).  The S&P 500 is indicated +0.8%.

What caused the reversal? Hard to say. Early on in the Asian day things weren’t looking so good. This is what the opening comment from Bloomberg Asia said:

Resource-linked currencies weakened against the dollar, with the Bloomberg Commodity Index falling the most in nearly three weeks. The Swiss franc advanced against the greenback as worries over the omicron variant and a setback to President Joe Biden’s economic agenda bolstered demand for haven assets.

But as commodity prices came back, so too did the commodity currencies.

The obdurate Senator Joe Manchin, a multimillionaire, outlined some possible changes to President Biden’s $2tn Build Back Better bill that might draw his support for spending a few bucks on child care and rebuilding crumbling bridges, even though he had no problems authorizing double that amount to pay for drone attacks on wedding parties worldwide. Of course the fact that the bill also includes measures to encourage clean energy and Mr. Manchin’s family has made a fortune selling waste coal from abandoned mines has nothing to do with his principled objection to this bill’s cost and impact on the deficit. Anyway the fact that he has made his negotiating points clear has raised hopes that maybe this bill can be passed after all when Congress returns in January.

Also reports said that there might be some rethinking of the Omicron variant, but I can scarcely believe that. If there is rethinking, it’s only thinking about how bad it’s likely to be. Even if it’s less serious, many times more people getting sick with a less lethal infection still means a lot more people in the hospital, which is the big worry.

The US Centers for Disease Control (CDC) said Omicron now makes up the majority of cases in the US. Right in time for everyone to get together for Christmas!  President Biden will make a speech tonight about the virus, but reports say he’s not planning on locking the country down (he can’t, anyway) but rather to encourage people to get vaccinated.

Although the US Federal government can’t lock the country down, Europe seems to be going in that direction. German Chancellor Scholz (my first time to write that!) yesterday said the country needs “new restrictions on personal contacts” and will talk with regional leaders today to discuss further measures.

On the other hand…Moderna announced that a booster dose of their vaccine increased antibodies against Omicron, while the European Commission has granted a conditional marketing authorization for Novavax’s vaccine, the fifth COVID-19 vaccine authorized in the EU. It’s the first protein-based vaccine authorized in the EU, whatever that means – I assume it’s a good thing to have another approach, but what do I know about this? Nothing, really. But m

We saw one of the most astonishing moves I’ve ever seen in my years in FX overnight as the Turkish lira (TRY) staged an amazing rebound. Yesterday the currency fell by 9% or so vs USD (depending on where you start) to a record low of 18.36 after Turkey’s President Erdogan said Islamic law required him to cut interest rates. It subsequently rebounded 65.5% to 11.10!!!! after the government announced measures to support the currency.

Erdogan revealed a new program that will protect savings from fluctuations in the exchange rate – the government will make up for losses incurred by holders of lira deposit should the lira’s declines against hard currencies exceed interest rates promised by banks.

Of course what this means is that the government will print up more money and give it to deposit holders, thereby fuelling the inflation that’s causing the currency to decline in the first place. 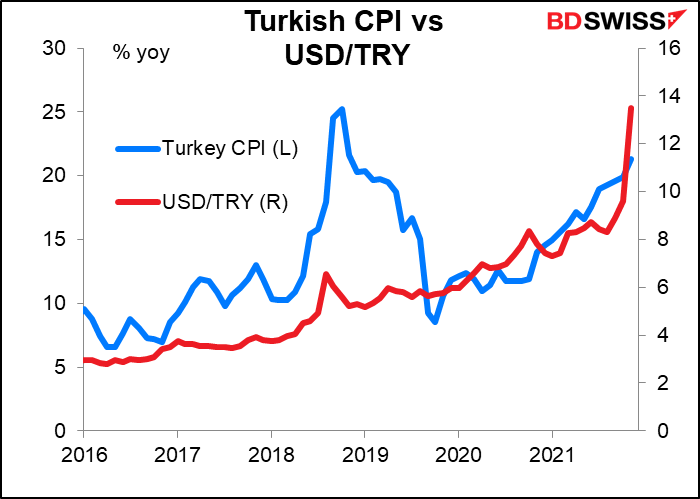 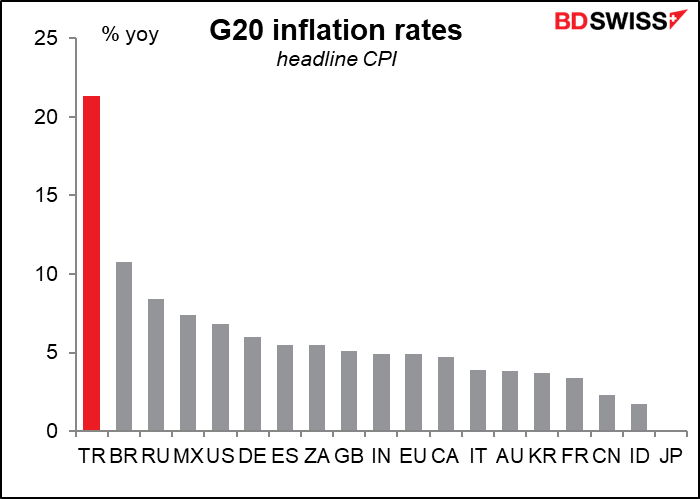 This program seems to have convinced a lot of people that the government will indemnify them against losses, but once they realize that the currency they’re being compensated in is just going to depreciate further, sparking further rounds of compensation that fuel inflation further, confidence is likely to erode again, in my view.

Nonetheless, the announcement acted as a “circuit breaker” that has bought the government a significant breathing space. And if confidence is the name of the game, this action may have been enough to stop the decline and change the market view, for now at least.

Before I’d invest my life savings in TRY though I’d want to see a decline in the country’s credit default swaps (CDS).  AT 624, the 5-year CDS is trading higher than at any time except a brief period during the Global Financial crisis (up from 578 on Friday).. We’ll have to see how that reacts today to evaluate how the professionals view the government’s move. 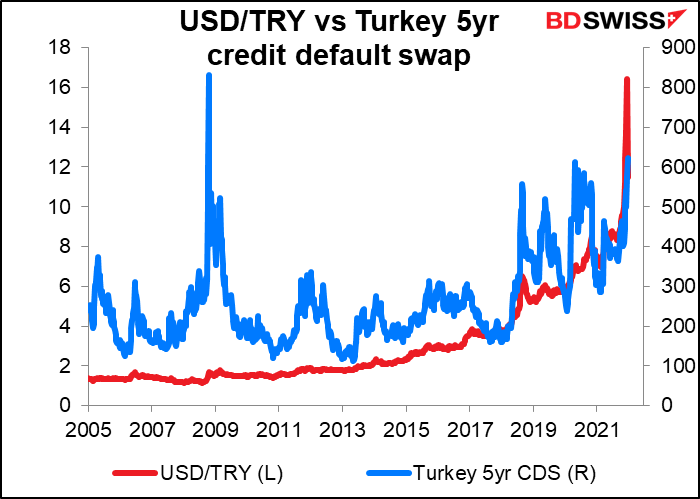 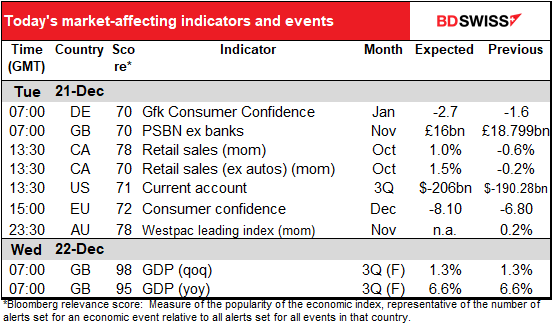 Another relatively quiet day in Indicatorland.

Canada’s retail sales is the main feature, such as it is – normally I don’t write anything about indicators with a Bloomberg relevance score below 80 unless they happen to be particularly significant for the FX market, like the Swiss sight deposits. But since I get paid by the word I have to write about something today or I won’t be able to afford Christmas presents for my kids!

Don’t expect much volatility around this number however. Not only is it not that widely watched, but Statistics Canada produces a preliminary retail sales figure, which was up 1% mom in October. Guess what the consensus forecast is for October? You only get one guess. 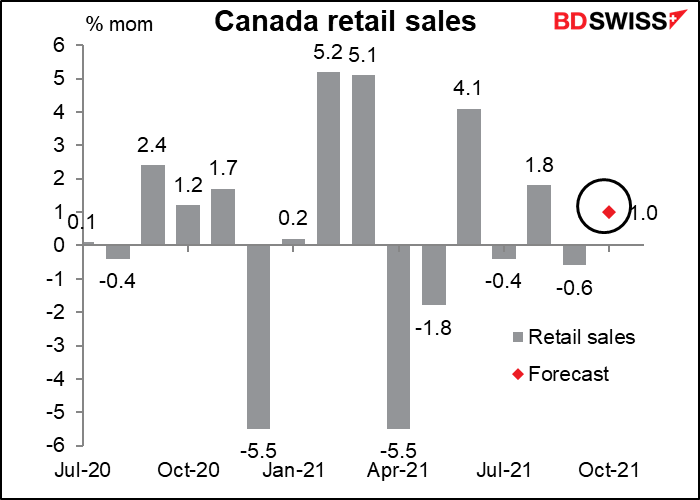 From looking at the reaction of USD/CAD following the announcement, retail sales ex-autos seem to be more important for the FX market than the headline figure. That’s expected to be up more. 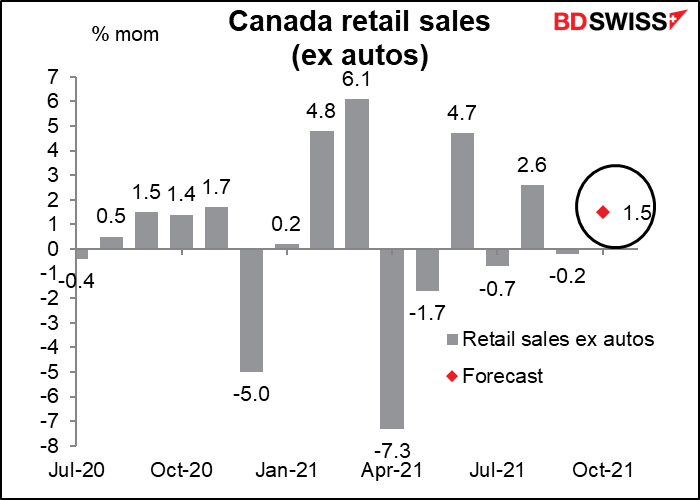 The US current account deficit is approaching the record levels set before the Global Financial Crisis. 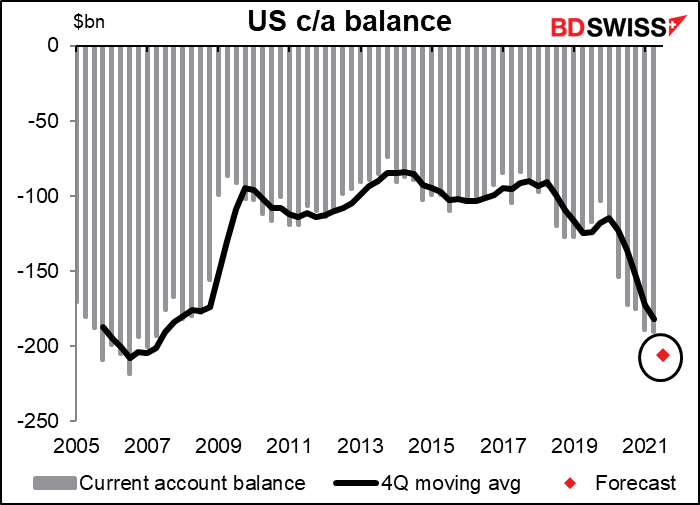 Does anyone care? It doesn’t seem to have any connection with the dollar. If anything, it seems to be the reverse of what one might expect – the trade-weighted dollar seems to increase as the current account deficit widens. 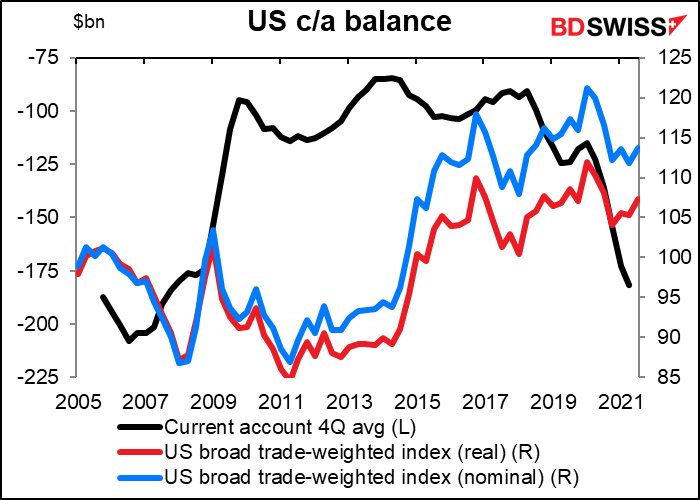 It’s the same when you look at the current account as a percent of GDP. 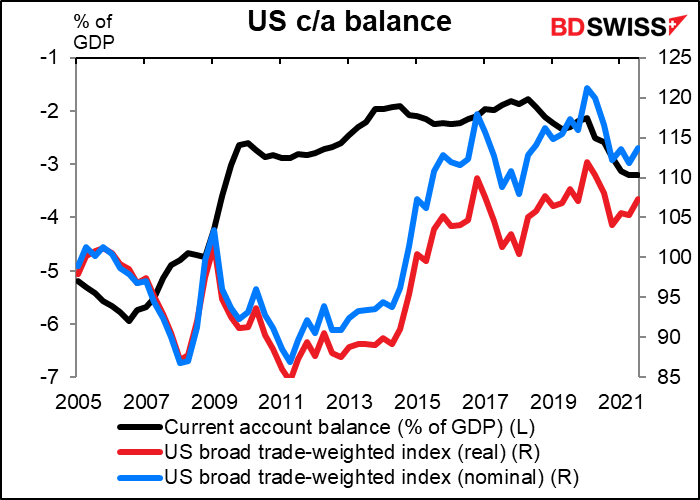 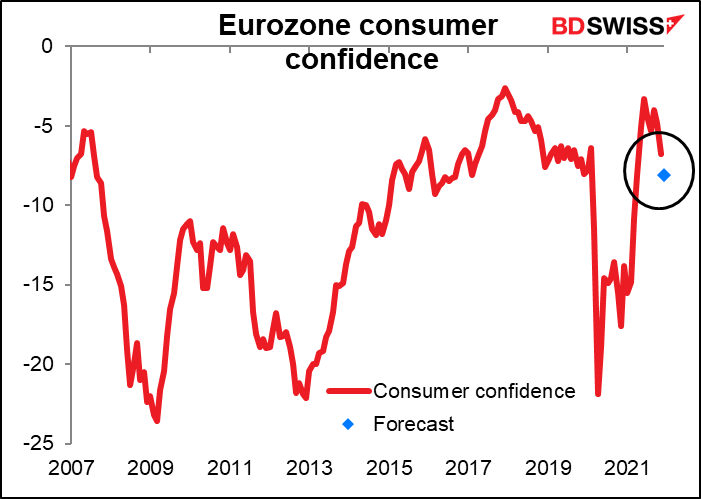 That’s not surprising. Eurozone consumer confidence is much higher than in the average OECD country. Given the resurgence in the virus and the spreading lockdowns, it’s no wonder that confidence would fall. It’ll probably fall further next month. 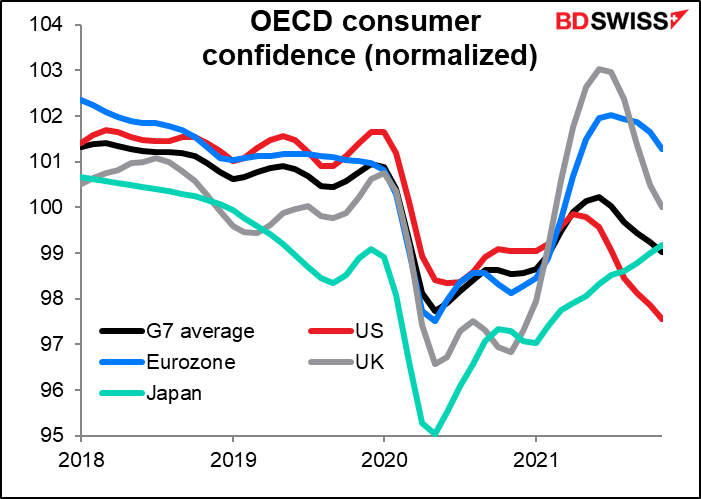 There’s no forecast for the Westpac leading index, but I thought you might want to see a graph of it anyway so you can see how it’s been trending. 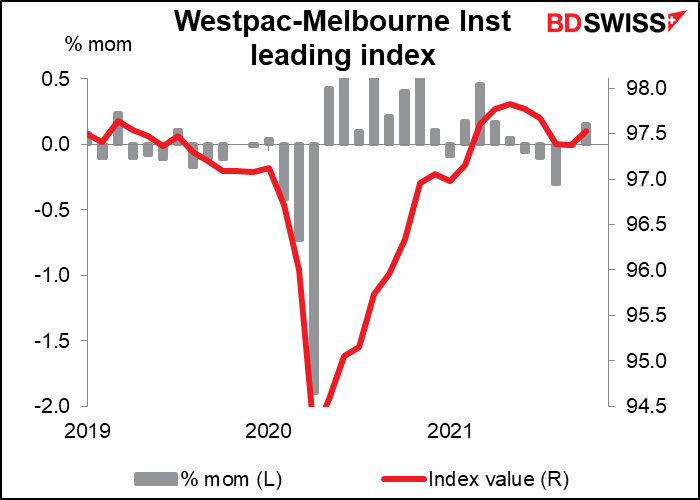 As for the final estimate of the UK Q3 GDP, it is often revised significantly, but with the country going back into limited lockdown in Q4 I don’t think Q3 is that relevant for predicting the future trend – therefore I doubt if this will be market-affecting. 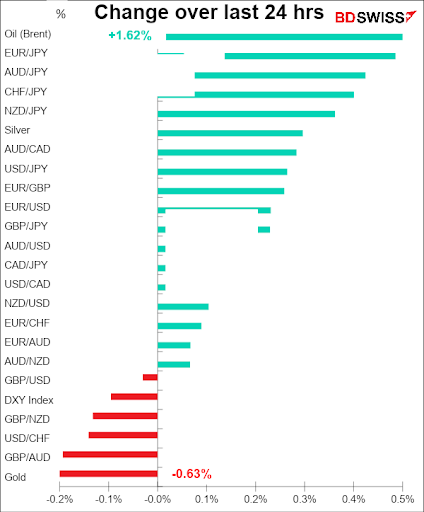