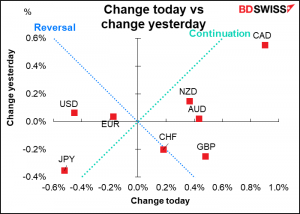 Really, that didn’t last long! Once more my equity screens are a sea of green: 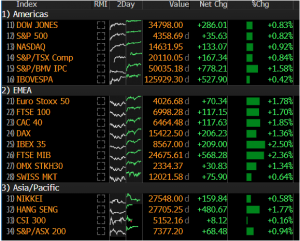 Decent earnings guidance helped the rally in stocks to continue. Monday’s rout is now a mere memory as the S&P 500 is up 0.7% so far this week, while the STOXX 600 had its best day in two months but remains a shade (0.2%) lower for the week — so far.
The lockdown vs freedom gauge, Peloton vs Planet Fitness, showed sentiment tipping back in favor of freedom – Planet Fitness (blue line) outperformed Peloton (red line), although Peloton was up slightly (+0.06%) anyway.

The market isn’t fully convinced of the return to normality however. Commodity prices were generally higher, but the economic-sensitive industrial metals didn’t all participate – zinc, nickel, and aluminum were lower while copper was up only 0.2% 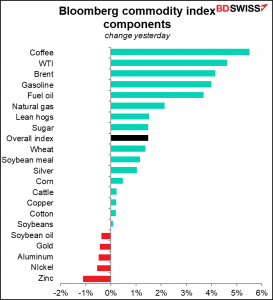 Copper, aluminum, and zinc are all below their recent highs. I don’t know whether this signals doubts about the recovery or just China’s attempt to rein in speculation in commodities. China sold the three metals from its national stockpiles on July 5th and 6th and yesterday said it will sell more on July 29th. Not only is it unusual for it to have two auctions so close together, but also the amounts sold at the second auction will be 50%-60% higher than at the earlier auction, a sign that they are serious about pushing prices down. 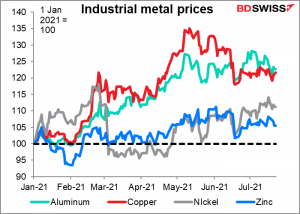 It was reported yesterday that China also offered to sell about 3mn tons or 22mn barrels of oil from its strategic state reserves. (This happened sometime this month, it’s unclear exactly when.) Nonetheless the energy complex had a great day! As usual, no specific reason that I could see except general macro enthusiasm. The price was rising before the US Dept of Energy released its figures and largely plateaued after that, as an unexpected rise in crude oil inventories was offset by a fall in fuel oil and distillate inventories (gasoline inventories fell too, but by less than expected). 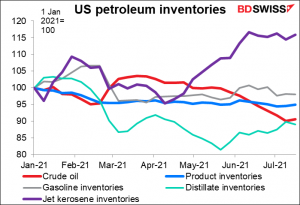 The rise in crude oil inventories was largely on the west coast, where the distribution system is isolated from the rest of the country. The more important inventories of crude at Cushing, Oklahoma fell to the lowest since Jan 2020. It seems to me at least that the supply/demand profile in the US is fairly tight. 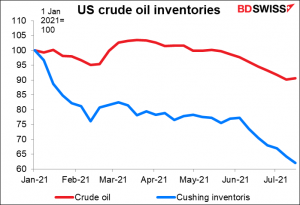 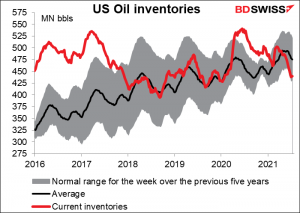 The move higher in oil explains why CAD finally had its day!

Canada is also one of the few places where the virus count isn’t climbing (I took the UK off the graph because it’s just too too high). 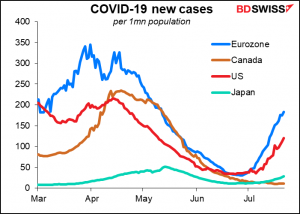 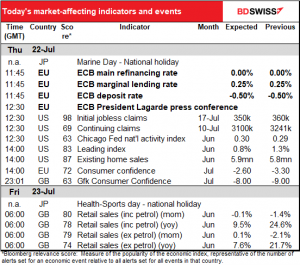 OK now we finally get some excitement! The Governing Council of the European Central Bank meets today to decide on policy.

What are they going to do? The short answer is, probably nothing. The long answer is…well, long. They recently completed a review of their strategy and came out with a new monetary policy strategy statement. Needless to say, I went into this in great depth and detail in my Weekly Outlook, so please refer there for the full insight. Just to recap, the new strategy includes:

● A shift to a symmetric inflation target, with undershoots given equal (or higher) weighing to overshoots
● Adding financial conditions to the basis for making policy decisions
● Adding housing to the inflation data (eventually)
● Adding climate change to its policy goals
● Updated communications

This time around we’re not likely to see any change except in the form of the communications. I would expect the statement immediately following the meeting to be somewhat simpler so as to be accessible to a wider audience. The format of the press conference may also change in some ways.

Any impact on the conduct of policy however is likely to wait until the September or October meetings, when they’ll have to decide what to do when the Pandemic Emergency Purchase Program (PEPP) is supposed to stop at the end of March.

Two in a row! Next up is the dreaded US weekly jobless claims. This week’s figures are particularly important because this is the survey week for the July employment data, including the nonfarm payrolls. The forecast level of 350k would be down 16% from the June survey week. 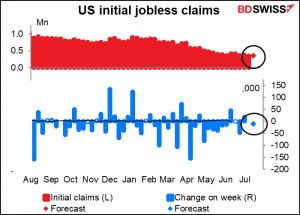 Continuing claims are expected to show a fairly steep drop of -141k. Is this a sign that the dastardly Republican plot of withdrawing benefits from people is having the desired effect of forcing them 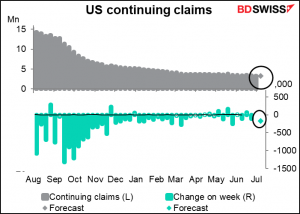 The US leading index seems to attract a lot of attention although it’s calculated from already-released indicators. It’s expected to be up 0.8%, which seems low compared to recent figures but is smashing by historical standards. Between 2000 and 2019 the leading index only hit or surpassed that level 31 times out of 240 months or 13% of the time. So it still signals pretty strong growth. 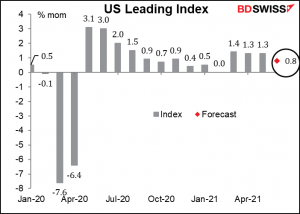 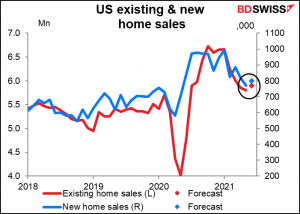 EU consumer confidence is expected to rise to the highest level since December 2017. That’s astonishing to me. Maybe people don’t follow the news any more? I guess they’re full of hope now that summer is here and things are opening up, by and large. 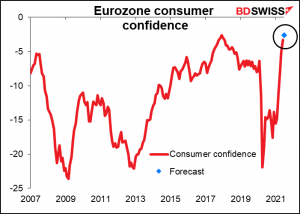 UK consumer confidence is also expected to improve, perhaps because the end of the lockdown period was within sight – even though the end of the pandemic certainly isn’t. 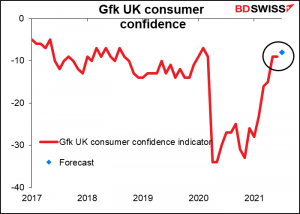 Then tomorrow morning we get the UK retail sales. There was a larger-than-expected decline in May and the market looks for another, albeit smaller, decline in June. But with “Freedom Day” having arrived, I think this will be seen as “old news” and not indicative of what’s to come for July, especially with consumer confidence so high (see above). I therefore don’t think it should affect the market much. 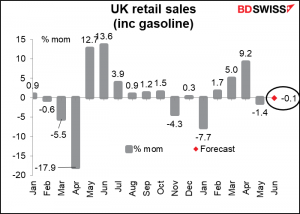 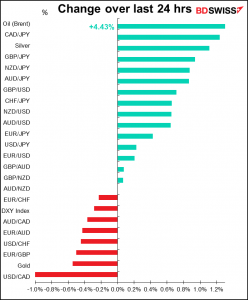