You are at:Home»MARKET PREVIEW»EUR Lower on Dovish ECB; Preliminary PMIs 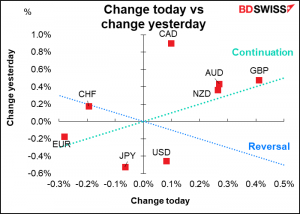 EUR rose briefly when the statement following the European Central Bank (ECB) meeting came out, but then came down during the press conference to finish the day lower. The initial strength in the currency was probably due to expectations that the ECB would be even more dovish than it was.

The new guidance is:

In support of its symmetric two per cent inflation target and in line with its monetary policy strategy, the Governing Council expects the key ECB interest rates to remain at their present or lower levels until it sees inflation reaching two per cent well ahead of the end of its projection horizon and durably for the rest of the projection horizon, and it judges that realised progress in underlying inflation is sufficiently advanced to be consistent with inflation stabilising at two per cent over the medium term. This may also imply a transitory period in which inflation is moderately above target.

The old guidance was:

The Governing Council expects the key ECB interest rates to remain at their present or lower levels until it has seen the inflation outlook robustly converge to a level sufficiently close to, but below, 2% within its projection horizon, and such convergence has been consistently reflected in underlying inflation dynamics.

Market implication: ECB rates will be lower for longer. This implies a weaker EUR. However, I think this was pretty well discounted in the market as this has been recognized as the implication of the change in strategy.

Elsewhere, AUD and NZD continued to gain as risk sentiment improved further. The Euro STOXX 600 closed up 0.6% while the S&P 500 finished +0.2% CAD, which had an extraordinary day Wednesday, also gained but not as much even though oil prices rose further.

GBP was the best-performing currency for reasons that aren’t entirely clear to me On the contrary, Bank of England Deputy Governor Broadbent said that the appropriate policy response to the current high inflation in the UK “could well be nothing” as he is “not convinced” that the high inflation will be persistent. 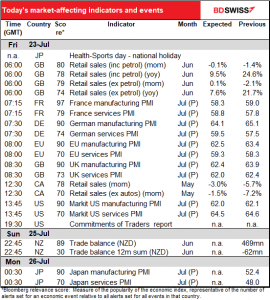 It’s PMI day! We get the preliminary purchasing managers’ indices (PMIs) for the major industrial countries today, except for Japan, which is on holiday.

It’s quite normal for the manufacturing PMIs to decline a bit once they get into the 60s. PMIs don’t rise forever.
The more important point is that the EU service-sector PMIs are expected to rise. That’s important because the service sector was harder hit by the virus and so the recovery there is important. The UK and US service-sector PMIs on the other hand are expected to fall, because those are above 60 and therefore as mentioned above don’t keep going up forever.

The result of the relative improvement of the Eurozone PMIs could be some EUR strength today. 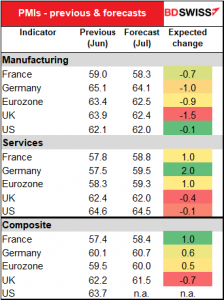 Canada’s retail sales are expected to be down slightly for the second consecutive month, thanks to the virus, which meant that non-essential stores were closed in several provinces. Also, auto sales fell during the month (after seasonal adjustment). I don’t think the figure will hurt sentiment toward CAD that much however as the continued rise in oil prices is more important. 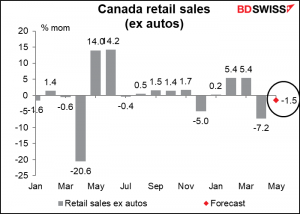 Also Canada is one of the few places in the world where the virus is not accelerating and deaths remain on a downtrend. 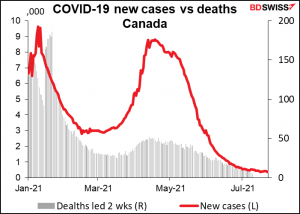 As a result, Canada should be able to continue loosening its restrictions, which should mean better data to come. CAD-neutral 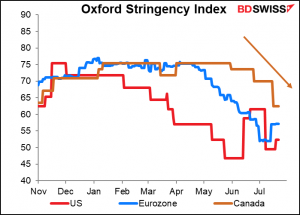 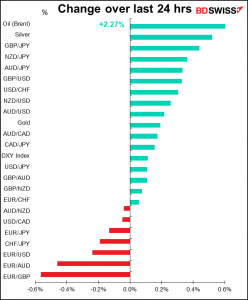