You are at:Home»MARKET PREVIEW»“Risk-On” as “Buy the Dip” Wins once again; US Oil Inventories 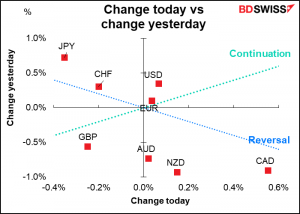 A big day of reversals in equity markets but not so much in FX.
On Monday my equity screens were a sea of red; indicating lower prices; today it’s a sea of green, indicating higher (except this morning’s Hang Seng index). The US market had a broad-based recovery, with 451 of the 500 S&P index companies moving higher. Cyclical industries, such as capital goods (+3.2%), consumer services (+2.7%) and banks (+2.6%) were the best-performing industries. So Monday’s fears became Tuesday’s buying opportunities. 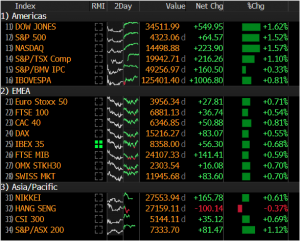 However not all the fear about the virus has dissipated, apparently. Peloton Interactive continued to outperform Planet Fitness, although Planet Fitness did recover somewhat. 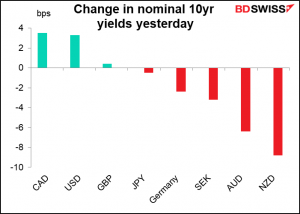 Just as Monday’s sell-off had no specific trigger, yesterday’s buying didn’t either – just the usual “buy the dip” mentality that has served investors so well over the last 10 years. So there’s unfortunately little to say about such dramatic moves

For we, which now behold these present days
Have eyes to wonder, but lack tongues to praise.

Oil prices fell after the American Petroleum Institute (API) reported an increase in inventories of 806k barrels during the latest week. Not much, but the market had been expecting a decline of 4.5mn barrels, so very different from expectations. 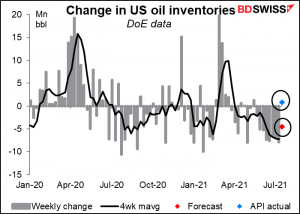 Of course the two don’t always agree – as the regression line shows, the API data tend to show less of a move than the Department of Energy’s data, and often (24% of the time) the two don’t even agree on whether inventories rose or fell in a particular week.. That’s usually the case when there are smaller changes in inventories, such as what the API reported this week. So we could still see the DoE figure showing a fall in inventories, although it’s unlikely to be as big as forecast. 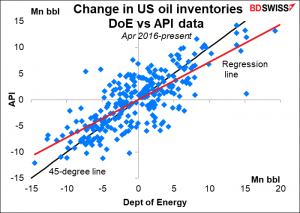 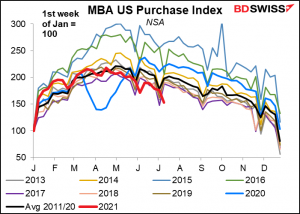 The one excitement I thought we might have today seems to be off the schedule. The Senate was supposed to take up the Biden Administration’s infrastructure bill today, but it seems that the Republicans are still balking at it – probably there’s too much money in it for workers and not enough for their donors. The hope is that they’ll be able to begin debating on Monday. 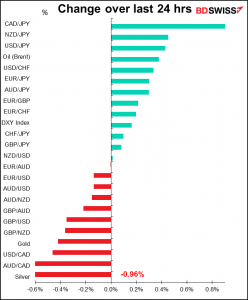