You are at:Home»MARKET PREVIEW»Commodity Currencies stage stunning recovery; US CPI

I did point out in my Weekly Outlook that just because it’s August doesn’t mean volatility goes away. On the contrary, thin holiday markets often are more volatile because there are fewer participants. That may be one reason why there were some dramatic moves yesterday. 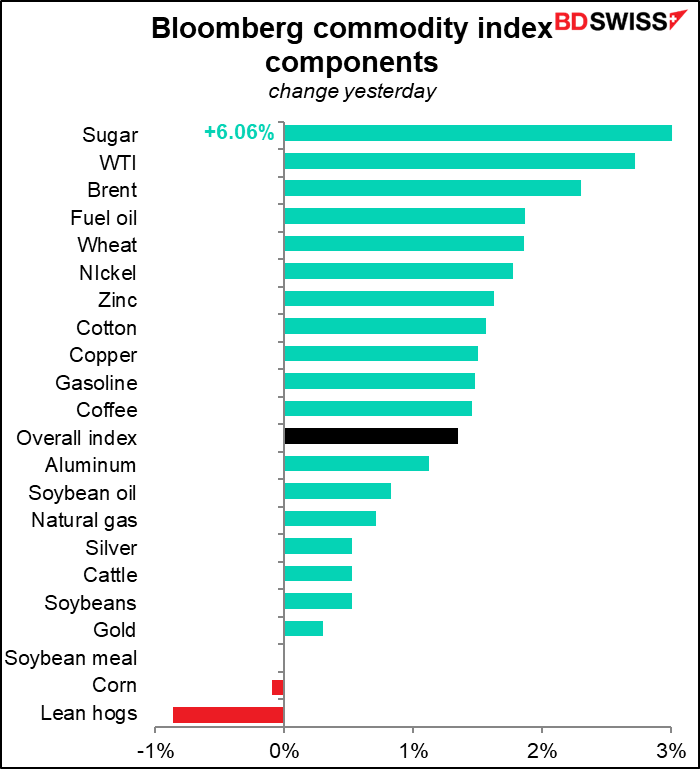 As a result, the commodity currencies staged a similarly stunning rebound, especially NZD.

As usual, we have to ask what caused the reversal, and there once again we wind up flipping through screens & reading news & coming up with nothing. If the fall in commodities on Monday was due to worries about the rapid spread of the delta variant, well then there’s only more bad news on that front. The China numbers continue to rise, as do those in the UK, which previously was in a nice downtrend. They’re even exploding in Israel, the country with perhaps the highest vaccination rate anywhere – and deaths are rising along with the new cases. 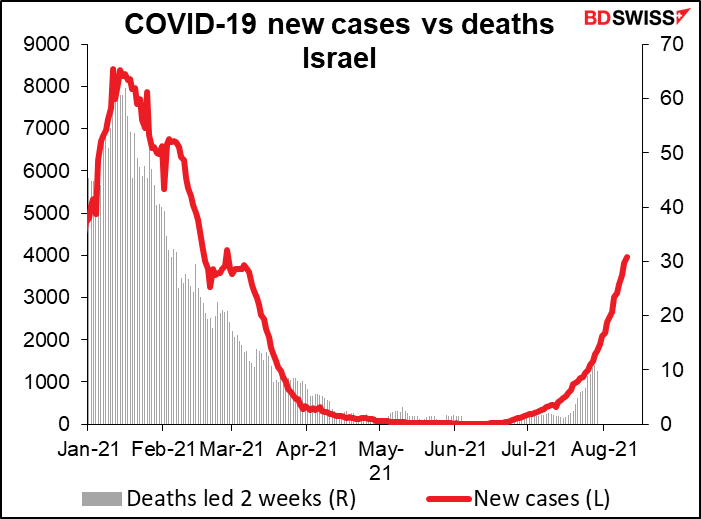 In the US, most states have seen new cases rise by 25%-50% just over the last week. In Florida, the worst-hit US state, the governor continues to fight to ban mandatory masking. Texas, which refuses to implement masking or vaccine requirements, is trying to poach health workers from other states because the Texas hospital system is at full capacity (this is also the state whose electricity grid gave out recently). 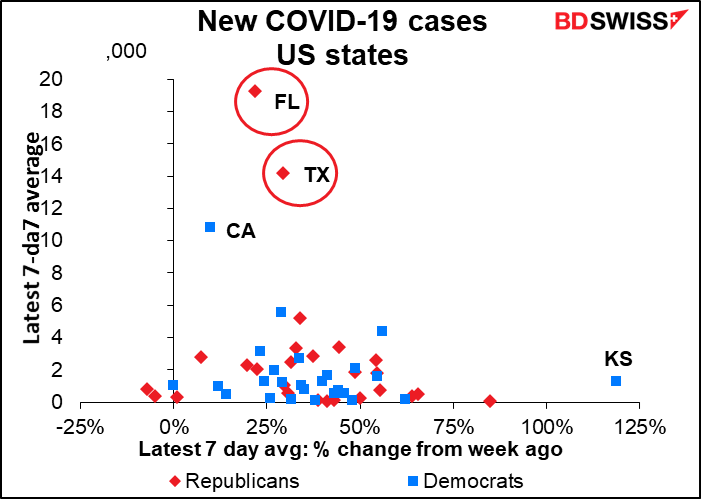 Meanwhile Australia has seen a 42% increase in cases in the last week and 90% in the last two weeks. 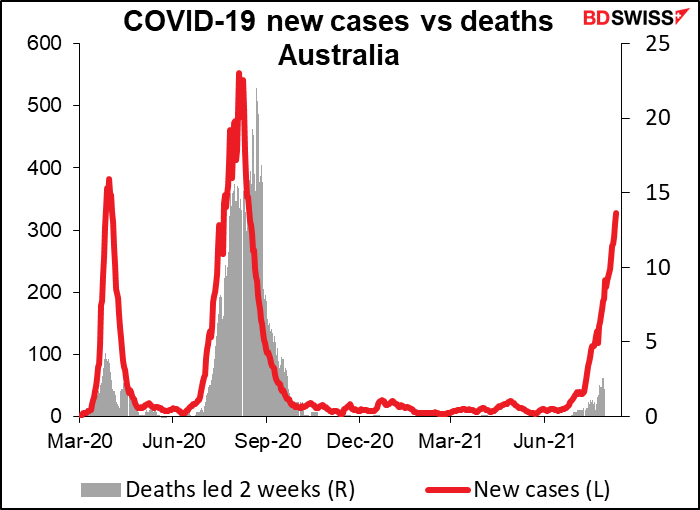 Yet it was generally a “risk-on” day, with the Euro STOXX 600 and the S&P 500 both moving further into record territory.

The only factor I can find that might be behind the move was the passage of the bipartisan US infrastructure bill in the Senate, with its $550bn in new spending commitments. This sets the stage for the even larger $3.5tn budget resolution to be considered in the Senate. However, neither are likely to be passed soon. House Speaker Pelosi refuses to bring the infrastructure bill up for a vote until the Senate completes reconciliation of the budget resolution. That will no doubt take some time and will probably run up against the debt ceiling negotiations. The final number is probably not going to be $3.5tn. So it may be premature for commodity prices to have exploded yesterday.

It could also be expectations of higher inflation behind the move ahead of today’s US consumer price index (CPI) (see below). The rates market continued to move up the expected date for when the Fed might start tightening rates. This expectation of earlier Fed tightening has supported the dollar and is likely to continue to do so. 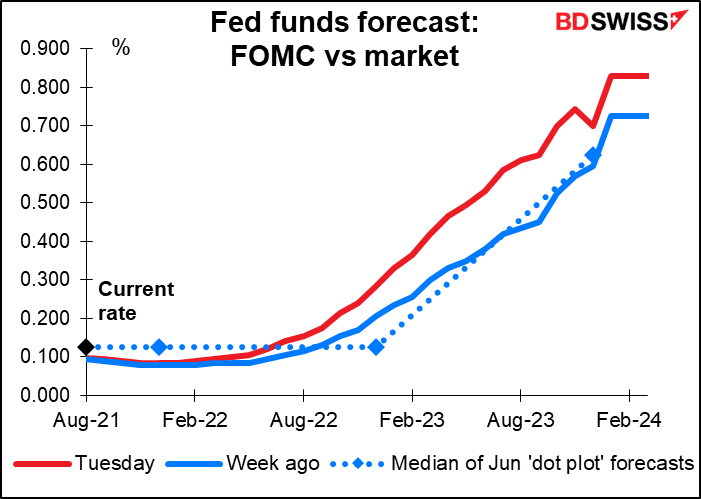 I mentioned yesterday that two voting members of the rate-setting Federal Open Market Committee (FOMC), Atlanta Fed President Bostic and Richmond Fed President Barkin, Monday both urged that the Fed start tapering down its monthly bond purchases relatively soon (Q4 according to Bostic).  Both these fellows said that they think the Fed has already hit their target of “inflation moderately above 2 percent for some time.” We’re likely to get further confirmation of that in today’s CPI. Even if it does show a decline in the rate of inflation, as long as it’s above 2%, the Fed has achieved half of its dual mandate.

With expectations of Fed tightening increasing, US bond yields also rose yesterday, supporting the dollar. That plus the general “risk-on” mood sent the CHF sharply lower. It’s noticeable that it even weakened vs EUR, which was weighed down by a big miss in yesterday’s ZEW survey (expectations fell to 40.4 from 63.3, far worse than the 55.0 consensus forecast). CHF bond yields are tied with German Bund yields for the lowest in the world, while the short-term policy rate of the Swiss National Bank (SNB) is the lowest interest rate in recorded history. Given the SNB’s frequently stated preference for a weaker currency, they’re likely to be among the last central banks in the world to tighten policy (fighting for that distinction with the Bank of Japan). Now that the market’s focus is on when countries might begin their tightening policy, that makes CHF an obvious target –at least until the next bout of risk aversion. 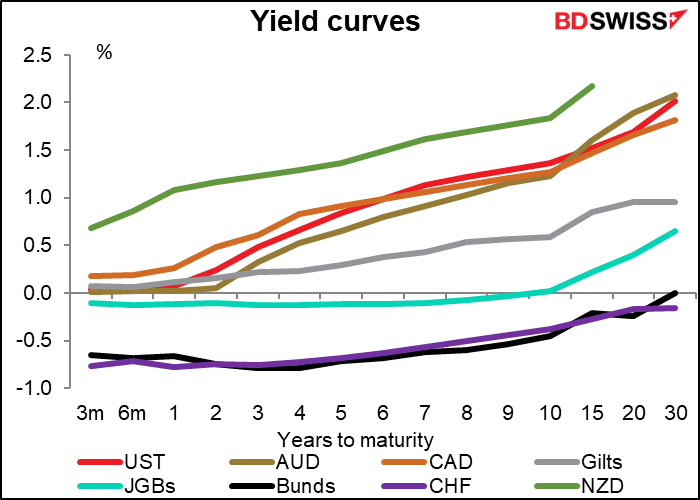 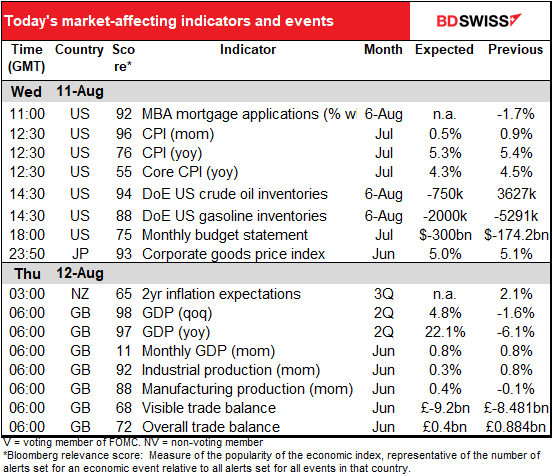 US mortgage applications aren’t doing so hot. Is it because house prices are so high, no one can afford them any more? That strikes me like Yogi Berra thinking – remember, he’s the guy who said about some restaurant, “Nobody goes there any more – it’s too crowded.” But I can’t think of any reason why the two can co-exist at the same time. 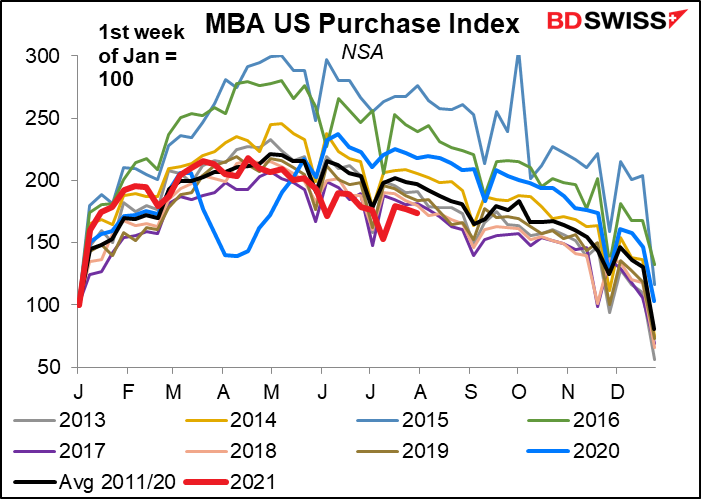 Then comes the biggie of the week: the US consumer price index (CPI). Needless to say, I delved into this deeply, dutifully describing dozens of details in that delightful document, my Weekly Outlook. I will deracinate the decisive paragraph and discuss it here:

The market is looking for the inflation rate to decline slightly in July. Will this confirm the Fed’s narrative that higher inflation is only “transitory”? This could be negative for the dollar. On the other hand, the absolute level of the CPI is expected to remain above 2%. That will confirm that they have achieved their target of “inflation moderately above 2 percent for some time” and bring forward the time when they can begin tapering down their support for the economy. That could be positive for the dollar. 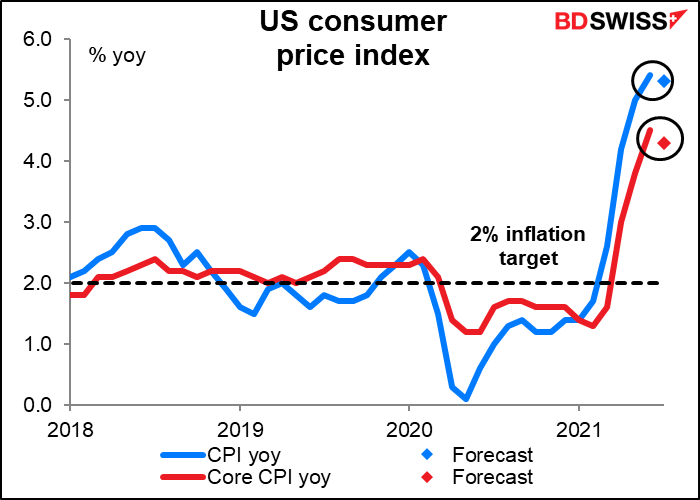 On balance, it seems to me that the market is in the mood to buy dollars. Hence I would expect a result in line with or above the consensus forecast to cause the dollar to strengthen further.

In fact though it’s hard to determine what the reaction of the dollar is going to be. It often confounds expectations. Looking at the last six times that inflation was higher than the market consensus (“positive”), lower than (“negative”), or exactly in line (“hit”), the reaction over the next few days seems to be the exact opposite of what one might think. Five ouf of the last six positive surprises resulted in an upward trend in EUR/USD (i.e., a weaker dollar)… 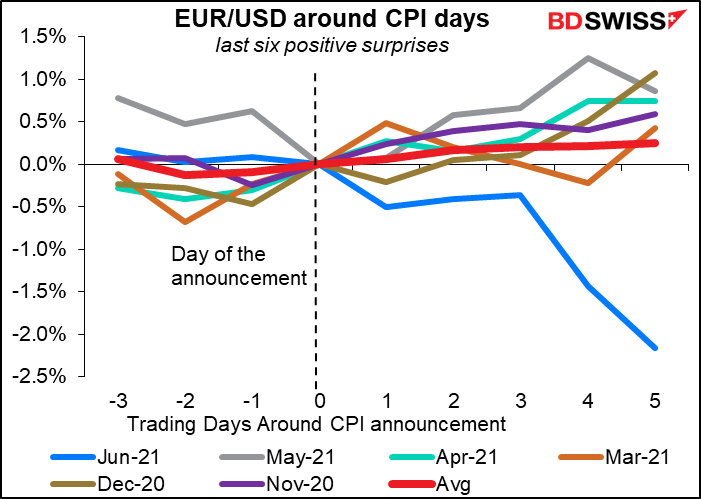 …while half the time the CPI missed estimates, the dollar appreciated. 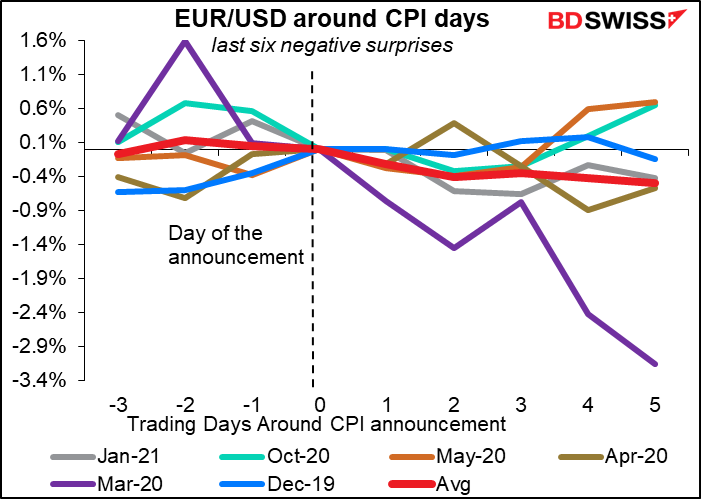 As it did when the consensus was spot on. So perhaps all we can say is, it’s hard to generalize. I know that isn’t at all helpful, but, in the immortal words of F. E. Smith, you may be “none the wiser but certainly better informed.” 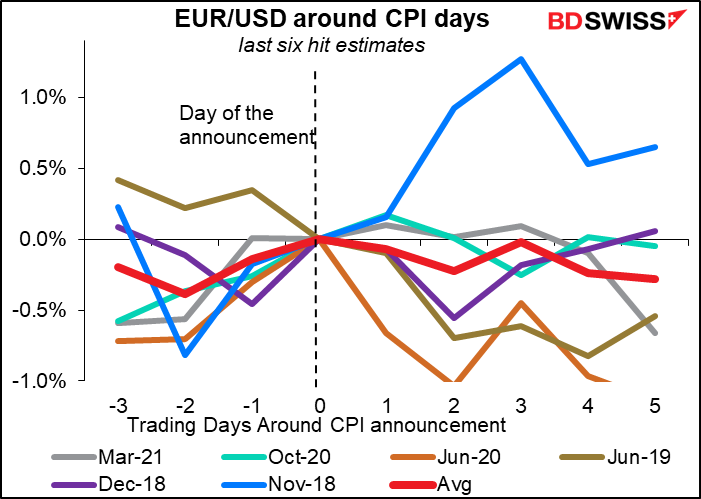 That’s it for the European and US day. When dawn breaks over Tokyo as the last stragglers stagger home from the Roppongi bars (actually, this indicator is released at 8:50 AM Tokyo time, so the last stragglers are long since in bed and the average salaryman is bracing for another day of battle in the corporate killing fields), Japan releases its corporate goods price index, which everywhere else is called the producer price index. It has a high Bloomberg relevance score so I always write about it, but I think this indicator is of more importance to equity market investors than the FX world, as higher producer prices in Japan never filter through to retail prices and so have no impact on monetary policy. They are however important for estimating corporate profit margins, which is probably why many people watch this index. 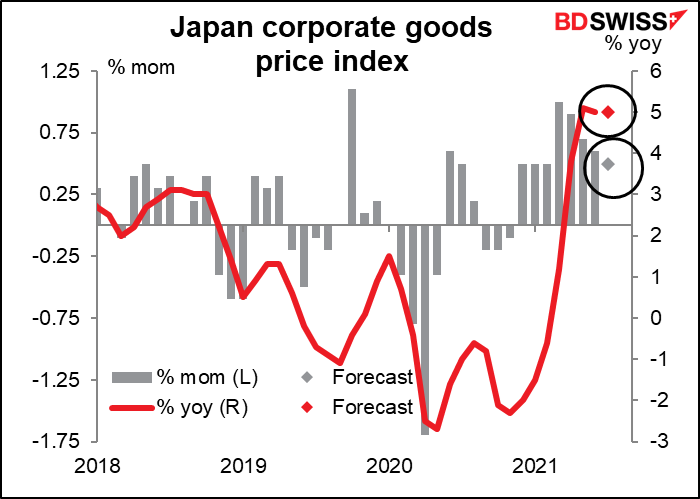 There’s no forecast for the New Zealand inflation expectations. So far, expectations are still well anchored around the center of the Reserve Bank of New Zealand (RBNZ) 1%-3% target range. 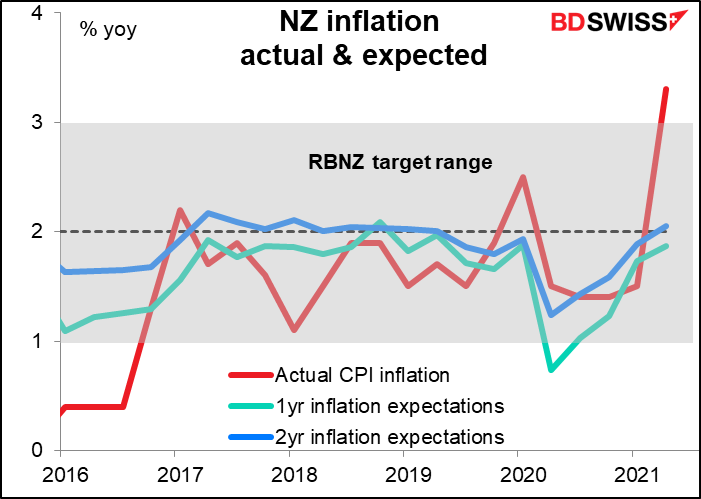 That may be because the market assumes the RBNZ will act before inflation gets out of hand. The rates market is already discounting a little over four rate hikes over the next year. 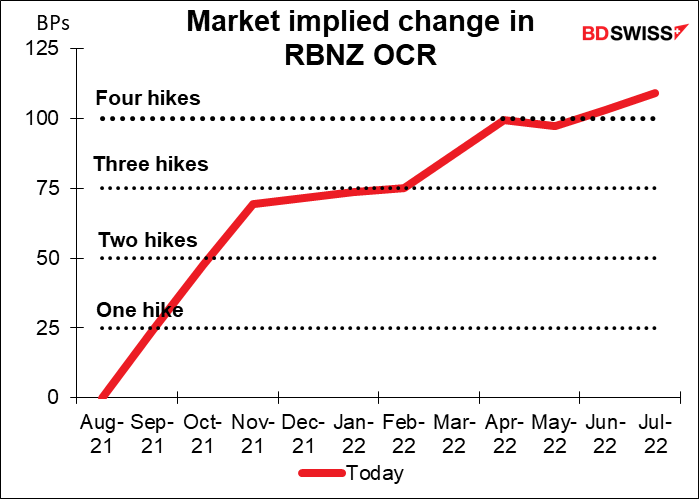 So this time yes, it is in the early early morning in Britain when they announce short-term indicator day, featuring the Q2 GDP report as well as industrial & manufacturing production and trade.

For Q2 GDP, The market’s 4.8% forecast is similar to the Bank of England’s expectations of a 5.0% qoq rise and so wouldn’t cause any change in BoE sentiment. Thus the figure should have little impact on the currency if it comes in as expected. 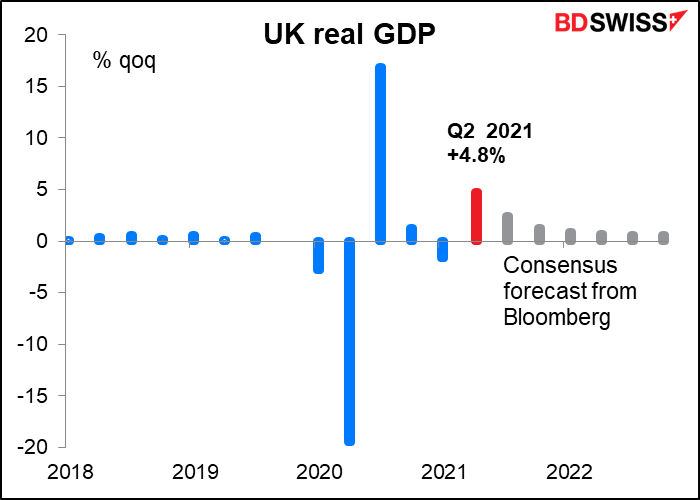 On a mom basis, it’s expected to rise at the same pace as the previous month. 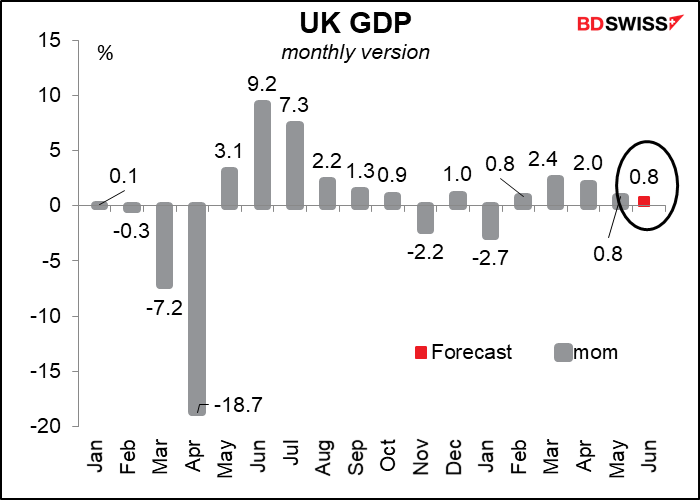 Both industrial and manufacturing production are expected to be up 0.3% mom, which is why there’s only one forecast dot on this graph. 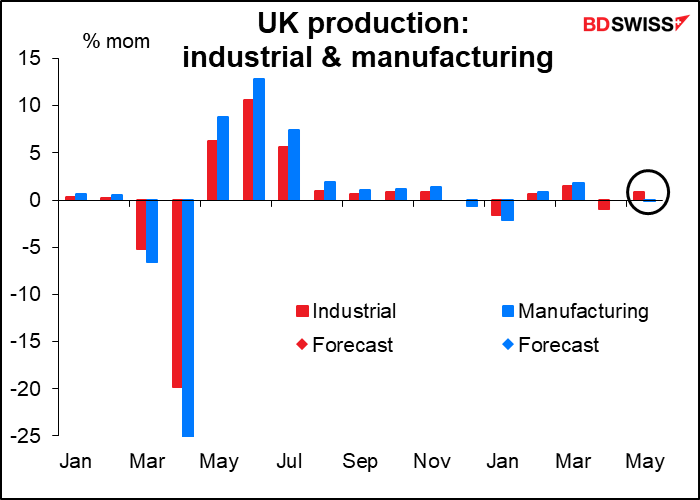 That would leave industrial production 2.2% below pre-pandemic levels and manufacturing, 2.4% below. 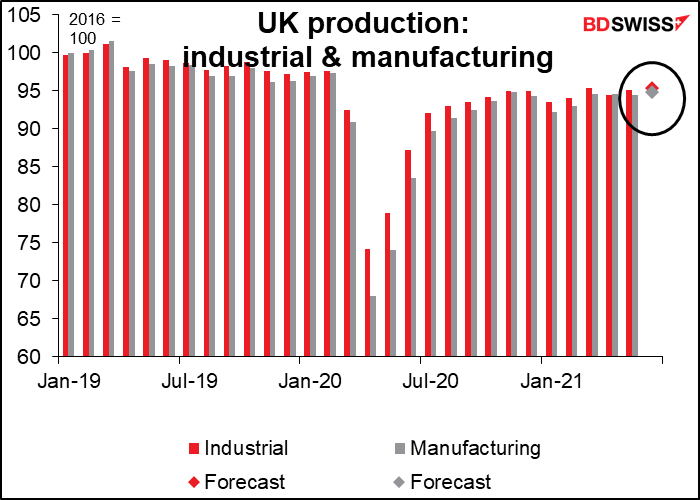 As for the UK trade data, it’s expected to show a slightly wider visible trade deficit and a slightly smaller overall trade surplus, but a trade surpus nonetheless. 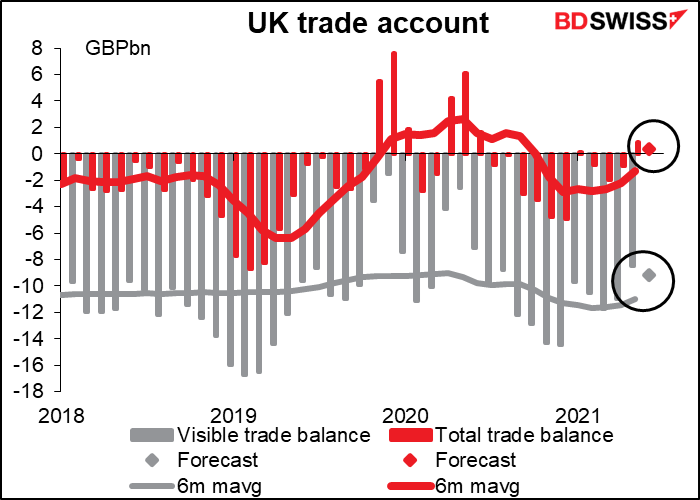 Out of all of these, the quarterly GDP is no doubt the most important and so the market reaction is likely to depend on whether the GDP figure beats or misses expectations. If it’s just around expectations, which are also in line with the Bank of England’s forecast, there shouldn’t be a major impact.

There could be more attention focused on the trade data this month, given the emerging problems with transporting food into Britain. You may well have seen pictures showing empty shelves in supermarkets and headlines about the government roping in the military to drive trucks. 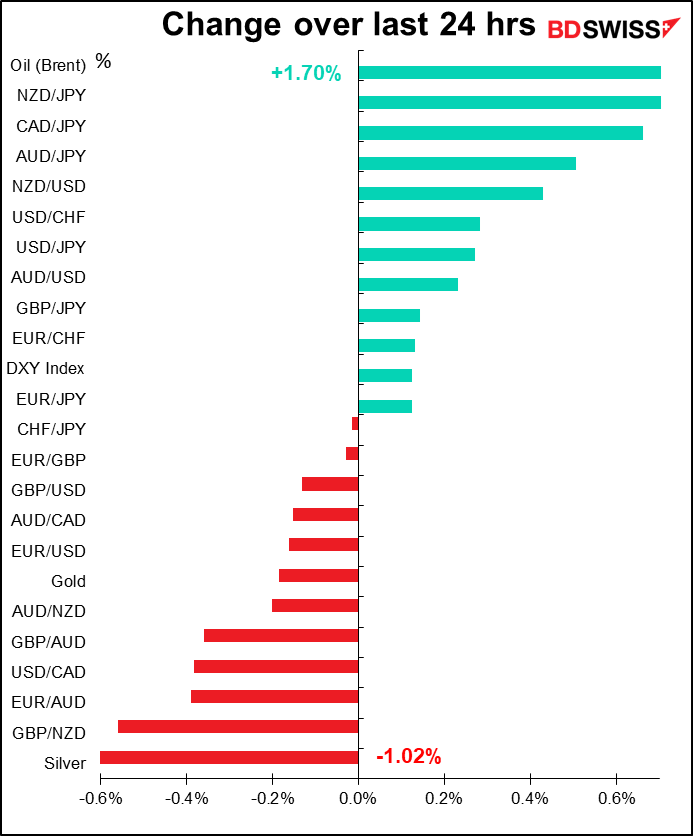