You are at:Home»MARKET PREVIEW»GBP Up on Rates Optimism, JPY Down on Positive Risk Sentiment; US PCE deflators

Once again, a fairly constrained FX market. Moves were mostly limited heading into the long weekend (the US and UK, which together account for 60% of global FX trading, will be on holiday Monday).

GBP was the best-performing G10 currency after Bank of England Monetary Policy Committee (MPC) member Vlieghe, who’s generally one of the most dovish MPC members, turned more neutral. In a speech entitled, “What are government bond yields telling us about the economic outlook?”, he said his “central scenario” was that “the first rise in Bank Rate is likely to become appropriate only well into next year, with some modest further tightening thereafter.” He noted that it will be “a major challenge…to integrate the large numbers of currently furloughed workers smoothly back into the labour market.” The market was particularly encouraged by his addition of a more optimistic scenario in which this transition out of furlough goes more smoothly than he expects. In that case, “then a somewhat earlier rise in Bank Rate would be appropriate.” That would be “soon after” 1Q 2022, with a “slightly steeper path” than in his central case. GBP gained and gilts yields rose 3bp-6bps across the curve.

CAD was the second best-performing currency as oil prices rose. The American Automobile Club (AAA) forecast that more than 37mn people will travel 50 or more miles from home over this long weekend, up 60% from last year (but still down 13% from 2019). figures. 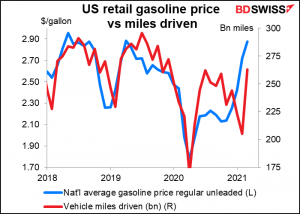 JPY was the major loser, for no reason having to do with Japan but rather just moving along with risk sentiment. First Europe’s STOXX 600 rose 0.3%, its sixth consecutive rise, to yet another record high. Then the S&P 500 gained slightly to within less than 1% of its record high. 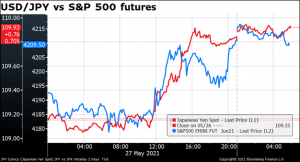 I expect USD/JPY to rise further (i.e. for JPY to depreciate more) due to Japan’s outlier status with regards to inflation (this morning’s Tokyo CPI for May showed the capital still in deflation, as expected) and the virus. Despite the start of the vaccine roll-out this week, the government Friday recommended extending the state of emergency that was to end on May 31st until June 20th, a little more than a month before the Tokyo Olympics are supposed to start. The extended restrictions (they can hardly be called a “lockdown” compared to what’s going on in other countries) are likely to drag on the economy. Although Monday’s industrial production may provide some respite, but retail sales may confirm the market’s bearish view (see below). 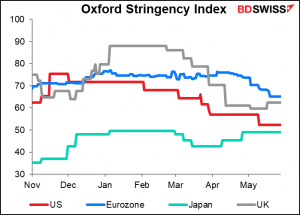 The range in USD/JPY so far this month has been a dismal 1.5%. There was a lower range in December 2019 (1.2%) and April 2019 (1.4%). After that you have to go back to May 1988 (1.2%) to find a slower month. I wonder if this sluggishness will embolden speculators and carry trader, who may feel that there is limited downside to shorting the currency. 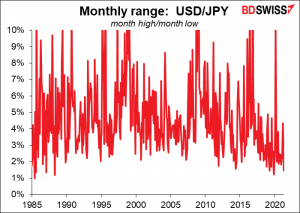 The G7 finance ministers and central bankers have an online meeting today ahead of next week’s in-person meeting of the finance ministers, which is ahead of the June 11-13 G7 Summit in Cornwall, England. According to Reuters, a draft agenda for today’s meeting points to a focus on the global economy, reducing greenhouse gas emissions, and digital payment technology such as central bank digital currencies.

Today is the data highlight of the week: the US personal income & expenditure figures, which bring with them the personal consumption expenditure (PCE) deflators. The PCE deflators are the Fed’s preferred inflation gauge, so while the consumer price index (CPI) gets a lot of attention, this is the real deal.

Both of the PCE deflators are expected to leap higher, although not as high as last week’s CPI did. Nonetheless they’re both expected to be well above the Fed’s 2% target. I don’t think the difference between them and the 4.2% yoy CPI is significant, however. It’s a binary question: are they above or below 2% yoy? Above 2% means Fed can eventually taper.

Nor is it all base effects. The forecast +0.6% mom rise in the core PCE deflator would be the largest rise since the bad old days of 1984, when the US was still struggling with high inflation and the Fed funds rate was as high as 11.75%, not 0.125% as it is today. (There is one month’s exception: in September 2001 the core PCE deflator plunged 0.6% mom and the next month it rebounded +0.7%, but that was obviously due to extraordinary circumstances.) As for the personal income & spending, incomes are expected to fall back to a more normal among after the leap higher in March, when the $1,400-per-person stimulus payments went out. The mom drop isn’t really significant here; what’s more important is that incomes would still be 9% higher than the pre-pandemic level on this forecast. 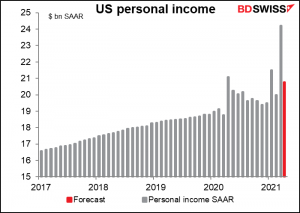 Amazingly, personal spending is expected to be up a bit in April. I presume it’s because not everyone finished spending their helicopter money. Bright and early Monday morning, Japan announces its industrial production. The domestic economy is still sluggish, thanks to the above-mentioned state of emergency, but the strong 5.2% mom growth in export volumes suggests that overseas shipments came to the rescue. Friday’s extension of the state of emergency suggests that the economy will remain dependent on overseas demand for the next several months. 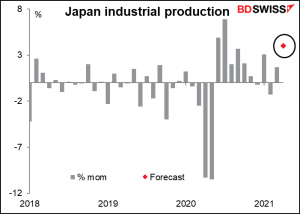 The sluggishness of the domestic economy should be evident in the expected mom fall in retail sales. 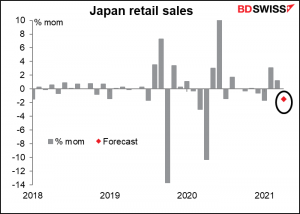 This decline in sales would put Japan well below other major economies and cement the view that their recovery is going to take longer than other countries, thereby encouraging shorts. 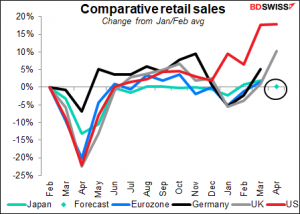 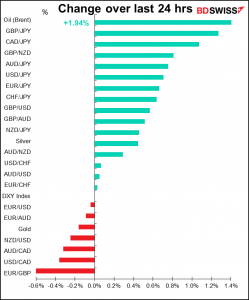