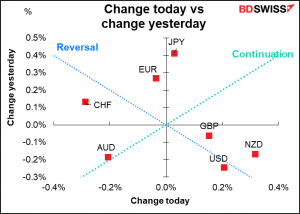 Yesterday was generally a “risk-off” day, for two reasons. One, the virus situation continues to worsen, as we’ve noted many times. New virus cases are rising both globally and in the G10 countries (more of that in my Weekly Outlook, coming soon). Secondly, as output recovers to pre-pandemic levels, central banks are starting to turn off the taps, as we saw Wednesday with the Reserve Bank of New Zealand (RBNZ) deciding to end its QE program and with the Bank of Canada cutting its bond purchases by CAD 1bn a week. This has raised the question of how long we can expect the current regime of extraordinary monetary policy around the globe to last.

As a result, everything fell: US stocks fell, oil fell, and US Treasury yields fell. Yield curves flattened too, which is another sign of fear of diminishing growth expectations. 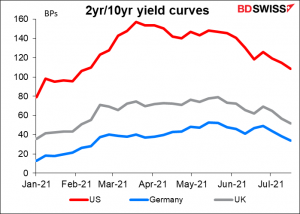 NZD was the best-performing currency after the NZ consumer price index soared past market expectations and out of the Reserve Bank of New Zealand (RBNZ)’s target range. This perhaps explains why the RBNZ decided at Wednesday’s meeting to stop its quantitative easing program and reinforces the idea that they’re likely to start hiking rates sooner rather than later. 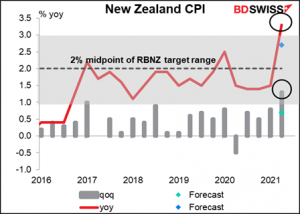 As a result, the market is now pricing in two whole rate cuts this year – a big jump even from Wednesday following the RBNZ meeting. 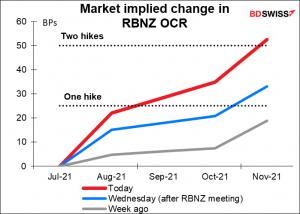 GBP also outperformed after some hawkish words by Bank of England Monetary Policy Committee (MPC) external member Saunders. He said it may “become appropriate fairly soon to withdraw some of the current monetary stimulus in order to return inflation to the 2% target on a sustained basis” and even outlined what he thought the most appropriate options would be, such as ending the QE program before the full GBP 150bn envelope has been used (as soon as in a month or two) and/or rate hikes next year. The comments were particularly impressive because he’s historically been one of the most dovish members of the MPC. They also followed Wednesday’s comments from MPC member Ramsden, who said he could “envisage those conditions for considering tightening being met somewhat sooner than previously thought.”

Still, the market is not yet pricing in even one 25 bps hike in Bank Rate, so there’s plenty more room to go, in my view. 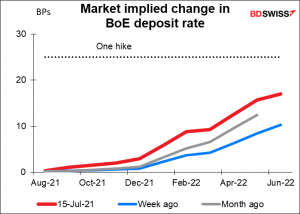 I highlighted the possibility of a lower EUR/GBP earlier this week – it seems to be moving in that direction.

The Bank of Japan meeting was every bit as exciting as I expected, which is to say not at all. Even its foray into green finance was timid: its new green financing scheme involves offering interest-free funds for banks to on-lend for climate-linked loans or investments its new green financing scheme. If it were really serious it could have paid interest to banks on these funds to encourage them to make such loans or set a target for purchases of green securities. It will also buy green bonds as part of its foreign reserve management. 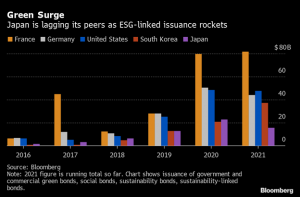 The BoJ raised its forecast for inflation this FY to a still far-below-target +0.6% from 0.1%, but the FY22 forecast was raised only 10 bps to +0.9% and the FY23 forecast unchanged at +1.0%. At a time when every other central bank is struggling to convince the market that its above-target inflation is only temporary, Japan is the outlier that is struggling indefinitely with below-target inflation. This is why I think JPY is the ultimate funding currency for carry trades and is likely to weaken over the longer term. 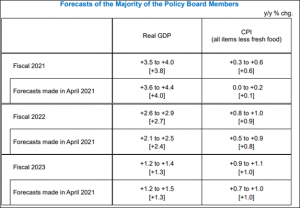 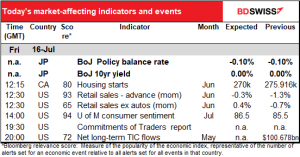 The main focus today is the US retail sales. It’s expected to be down mom again as the impact of the March supplementary payment continues to fade. 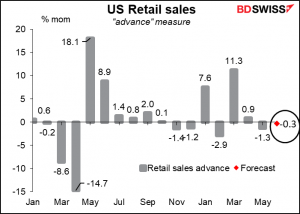 We’ll have to get used to weak retail sales figures from now. Even after two months of decline, retail sales are expected to be 17.5% above the pre-pandemic average. This just isn’t normal. As supplementary unemployment insurance fades from the scene and incomes come back to normal, it’s likely that retail sales will come back to normal, too. This will be a crucial determinant of growth in the future. As the fiscal boost from extraordinary government spending fades, the burden of supporting the economy falls on the consumer, who may well be unemployed still. That could be a challenge for growth prospects in the future, not only in the US but all over the world. 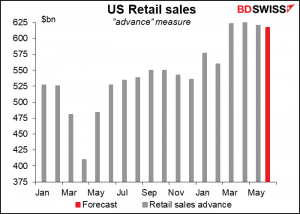 The University of Michigan’s consumer sentiment index is expected to show a rise in sentiment now as well as an improvement in expectations. This is a good sign for consumer spending going forward, although note that confidence is still well below the pre-pandemic levels. 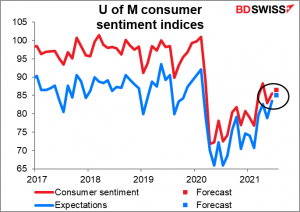 Inflation expectations in the survey are going bananas. The one-year inflation expectations, which dipped last month, are expected to rise slightly (+10 bps). Evidently Joe & Jill Public disagree with the Fed about whether the current high inflation rate is likely to be “transitory.” That could prove disturbing for the market. I think this part of the U of M announcement will be the more important part as the Fed es that inflation expectations may be becoming unanchored from their 2% target. 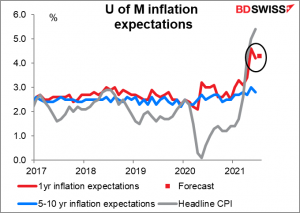 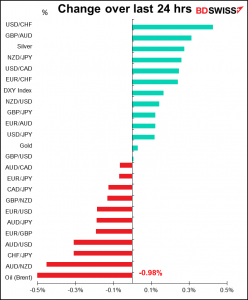