The rates scream “holiday market.” With the UK and US on holiday today, it appears that traders decided to knock off early on Friday and haven’t come back yet. It’s hard for me to get excited explaining & discussing movements of ±0.2% or less. Furthermore, looking at the screens I can find no good explanation of the small movements that did take place, except for such generic comments as “end-month portfolio rebalancing” and “ahead of Tuesday’s Reserve Bank of Australia meeting,” etc.

Once again the dominant trade was selling dollars, mostly against EUR, GBP, and CHF. This is the sixth consecutive week that specs have increased their net short USD position. The selling was not very aggressive however. The increase in EUR positions was small despite EUR/USD returning back above the 1.22 level.

The CHF trade was notable in that it represented a large portion of the relatively small CHF position. Specs went from short 4,265 contracts to short 1,203 contracts. Traders have generally been long CHF over the last two years and have been short only since late April. 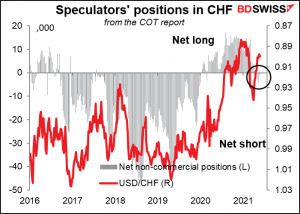 On the other hand, specs flipped from being slightly long AUD to slightly short. There was little change in the other two commodity currencies. 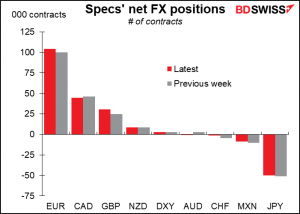 Hedge funds also cut their AUD positions and increased their GBP longs, as well as increasing their CAD and NZD longs too. They too flipped from short CHF to long. However their JPY positions were virtually unchanged. 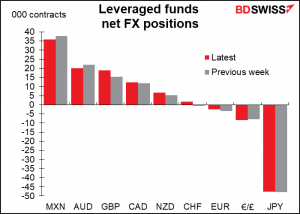 Speculators increased their gold longs but reduced their silver longs. 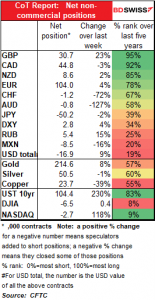 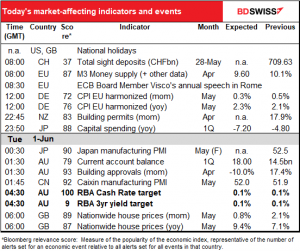 It’s a holiday today in both the UK and US, so activity is likely to be light – these two centers together account for 60% of global FX trading. That can work both ways though. Sometimes thin trading leads to greater volatility owing to fewer market participants to absorb large orders. Or if something big happens, like an earthquake or a war, there’s not the depth in the market to absorb the buying & selling. Most of the time though it just means fewer large orders and therefore less volatility. 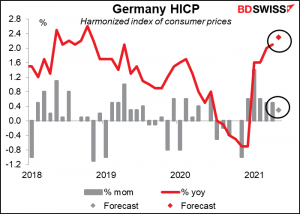 This confirms what European Central Bank (ECB) Governing Council member Panetta said in an interview last week. He stated that he sees no justification for the central bank to slow the pace of bond purchases in its Pandemic Emergency Purchase Program (PEPP) at its next meeting on June 10th. “Only a sustained increase in inflationary pressures, reflected in an upward trend in underlying inflation and bringing inflation and inflation expectations in line with our aim, could justify a reduction in our purchases,” he said. “But this is not what we projected in March. And, since then, I have not seen changes in financing conditions or the economic outlook that would shift the inflation path upward.”

As of the latest data, neither the actual CPI rate (red line) or inflation expectations, as measured by the 5yr/5yr inflation swap (the expected rate of inflation for the five years beginning five years from now) is even at the ECB’s target 2% level, much less above it. 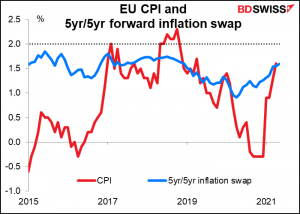 Following the German CPI today, tomorrow’s EU-wide CPI is expected to hit the ECB’s target of “close to, but below, 2%,” but with inflation expectations swill well below that level there’s no thought that the ECB might begin tapering down its support for the economy.

Overnight the release of the final manufacturing purchasing managers’ indices (PMIs) for those countries that have already released their preliminaries begins with Japan. Usually these aren’t revised that much and don’t make big waves in the market.

For those countries that don’t have preliminary versions, there can be some excitement, but not today from China, it appears. The market expects the May version to be just one tick higher than in April. 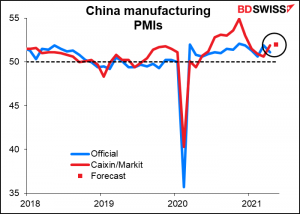 But of course, the RBA meeting is the big event of the day for AUD. The other two commodity currency central banks have already started normalizing policy: the Bank of Canada over a month ago started tapering down its bond purchases, while the Reserve Bank of New Zealand (RBNZ) earlier this week published a forecast for its official cash rate that incorporated a rate hike in 2Q next year.

Will the RBA follow along? Probably not. At their May meeting they said they would make key decisions about their yield curve control and quantitive easing programs at their July meeting. That means little to decide this week. According to the minutes of the May meeting, the decision in July will be influenced by recent data and financial conditions. Thus, I’d expect them to spend their time discussing such matters.

The main point of interest will probably be their assessment of labor market conditions after the disappointing April labor force survey (31k decline in jobs instead of +20k rise as expected). If they express concern about the pace of jobs growth, this could be negative for AUD. Confidence on the other hand would be positive. 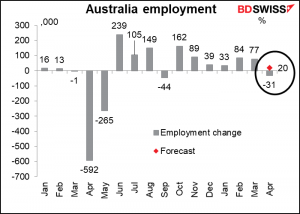 While Australia is one of the few countries where employment has recovered to the pre-pandemic level, it’s still nowhere near where employment would have been if jobs had continued to increase at the same pace as before. 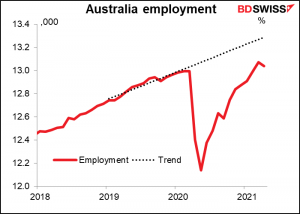 Then in the early early morning UK time, the Nationwide Building Society releases its house price index. It’s a good example of base effect, as the mom rate of change is expected to slow but the yoy rate of change soar. Either way though, the fact of the matter is that housing prices are on their way up in the UK, as they are most everywhere else. This may be yet another confirmation of the rebound in the UK economy. 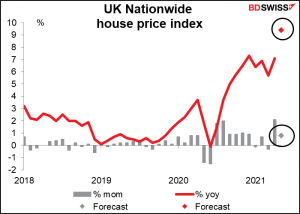 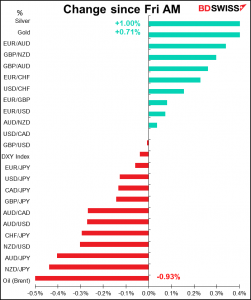