You are at:Home»MARKET PREVIEW»Commodity Currencies Up, Safe Havens Down as US Yields Retreat; UK budget, ADP report

US markets were down yesterday, but stocks are up pretty much across the board in Asia this morning. The FX market reflects the good mood, with a “risk-on” profile across the board: the commodity currencies up and the safe-haven USD, CHF and JPY down. US breakeven inflation rates rose while yields declined, pushing down real yields. That helped the dollar to fall to the bottom of the list despite the fall in US equities during the US day, which might otherwise have sparked a “risk-off” move that would’ve supported the dollar.

Treasury yields were pushed back down by comments from Fed Gov. Brainard, who as I mentioned before is the only registered Democrat on the Federal Open Market Committee and therefore a good candidate to replace Fed Chair Powell when his term is up next year. She gently pushed back against the recent sharp moves in Treasury yields, which she said “caught my eye.” She would be concerned if she saw disorderly conditions, or persistent tightening of financial conditions, that could potentially hinder progress toward the Fed’s goals. She repeated the Fed’s usual mantra that “the economy remains far from our goals in terms of both employment and inflation and it will take some time to achieve substantial further progress.” “Even after the conditions for liftoff have been met, changes in that policy rate are likely to be only gradual,” she added.

As a result, the market started to retrace some of the increase in the fed funds rate that it’s been pricing in recently. This trend may lead to further dollar weakness. 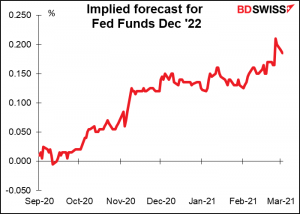 EUR/CHF continued its recent rise, tracking the move in Eurozone equities for most of the European day. The pair historically doesn’t have the best correlation with European stocks – more traditional risk-sensitive pairs, such as AUD/JPY and USD/NOK have a higher correlation – but we should watch this correlation closely. The reason why CHF has consistently been one of if not the most overvalued currencies in the G10 is the reluctance of Swiss investors to recycle the country’s huge current account surplus by investing abroad. 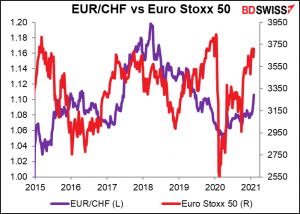 But a lot depends on how Swiss stocks perform relative to European stocks. Recently they’ve been underperforming, which tends to go along with a weaker CHF as Swiss investors move money into the better-performing markets. 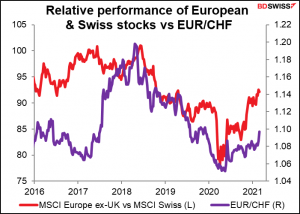 On the other hand, Switzerland has finally gotten its virus situation under control, more or less. A few months ago, it was among the worst in Europe, but now it’s on par with Germany. But I’m not sure the FX market is paying much attention to virus cases in Switzerland, otherwise the currency would’ve collapsed back in November. 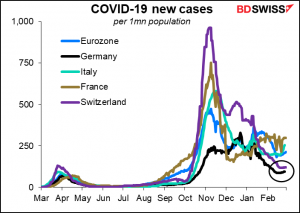 Oil fell during the day on concerns about tomorrow’s OPEC+ meeting, which is likely to decide to increase output by some 1.5mn barrels a day (b/d). Late in the day the American Petroleum Institute (API) announced an enormous surprise increase in crude oil inventories (+7.4mn barrels vs -1.3mn expected), 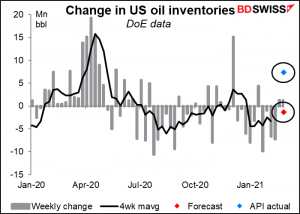 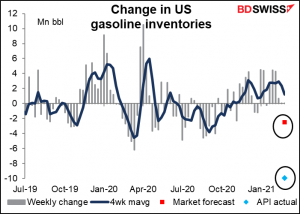 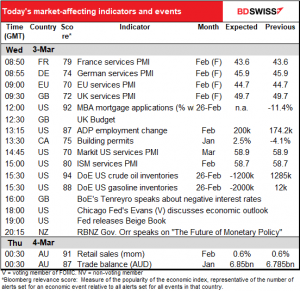 The big event today is the UK Budget. I have no particular insight into what’s likely to appear in the budget – all I know is what I read in the papers, just like you. The way most commentators are describing the Budget is as a “balancing act.” On the one hand, Chancellor Sunak has to continue supporting the economy until the pandemic is over and things can get back to “normal,” whatever that might be eventually. With some 6mn people on government-supported job furloughs, that means continued extraordinary spending.

On the other hand, the budget deficit has exploded already and there is some need to get it under control sooner or later. 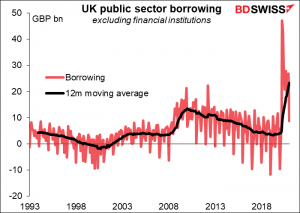 As a result, Sunak is likely to raise some taxes while increasing spending to support the economy through the last few months of lockdown. The main question that people have is, which is he going to do more of?

I would expect Sunak to talk a good fight for fiscal discipline but to put off any concrete moves to rein in spending until the Autumn budget, when not only should the pandemic be over but also the initial shock from Brexit. He’s likely to get some help from the Office for Budget Responsibility (OBR), which should show that the government is keeping to its projections from last November, particularly as borrowing has been lower than expected recently. That gives him some breathing space to hold off tightening until the worst is over. The FT suggested that he would phase out support for the economy only slowly in tandem with the government’s plans for gradually lifting restrictions between March and June. That means extending some of the key support measures, such as the furlough program for workers and corporate tax & VAT relief for some businesses, at least until the end of June. At the same time, he may well warn of tax hikes to come and indeed he could implement some, but not enough to reduce the overall fiscal impulse.

The impact on the pound depends on what Sunak decides. The market nowadays is rewarding future growth prospects. If he prioritizes supporting the economy over getting the country’s fiscal house in order and provides further accelerant, then the pound could gain on the news. On the other hand, given the better-than-expected turnout in the debt department so far, he could reduce net spending somewhat and still argue he was taking an expansionary stance. In that case however I think the FX market is likely to penalize him.

Currently, the UK is expected to have the slowest recovery of the four major economies. Anything Sunak can do to boost that growth will probably boost the pound, too. 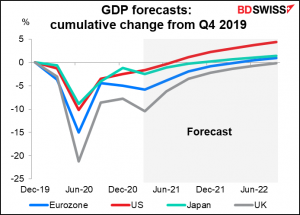 As for the indicators, today we get the final service-sector purchasing managers’ indices (PMIs) for the major industrial economies and the one-and-only versions for most other countries. The initial versions were all over the map, with only the US over the crucial 50 “boom or bust” line. Britain made a tremendous leap, going from 39.5 to 49.7. Will it be revised to over 50? Monday’s manufacturing PMIs were generally revised a bit higher, we’ll have to see if these are too. 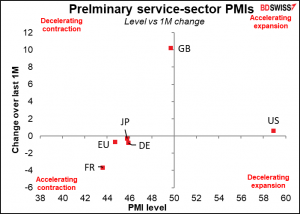 The US Institute of Supply Management (ISM) version of this index is expected to be unchanged at 58.7, which is almost identical to the 58.9 of the Markit version, so it should be greeted with a major yawn if it comes in as expected. 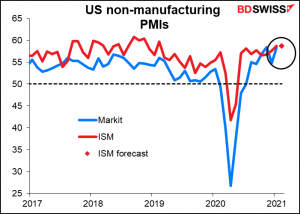 Now comes the long-awaited ADP employment report. Automated Data Processing Inc. (ADP) is an outsourcing company that handles about one-fifth of the private payrolls in the US, so its client base is a pretty sizeable sample of the US labor market as a whole. It’s therefore watched closely to get an idea of what Friday’s US nonfarm payrolls (NFP) figure might be. One point to note: the ADP adjusts its figures to match the final estimate of NFP, not the initial estimate that we get this Friday. So, while it’s one of the best guides to the NFP that we have, it’s not perfect by any means – in fact, neither is the NFP figure itself, since it’s always revised.

The market is expecting a pathetic 200k increase in jobs. This was the kind of number we often had back before the pandemic hit, when the unemployment rate was 4% or so. With the Fed estimating that the real unemployment rate is around 10%, we should be seeing better job growth than this. Given the Fed’s new emphasis on supporting the job market as opposed to its previous emphasis on restraining inflation, I think pitifully low numbers like this imply lower-for-longer monetary policy and therefore a weaker dollar. 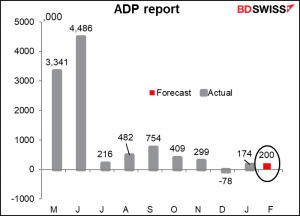 The Fed releases the “Summary of Commentary on Current Economic Conditions,” aka The Beige Book (which actually looks green to me, at least the version you can buy in the store) as always two weeks before the next FOMC meeting. It’s significant for the market because the first paragraph of the statement following each FOMC meeting tends to mirror the tone of the Beige Book’s characterization of the economy. The book doesn’t have any number attached to it that quantifies its contents, but many research firms do calculate a “Beige Book index” by counting how many times various words appear, such as “uncertain.” In any case, the book is largely anecdotal, so you’ll just have to watch the headlines as they come out.

Overnight we get a couple of indicators from Australia.

Australian retail sales are expected to be up +0.6% mom for the second month in a row. This indicator isn’t that market-affecting anymore now that the Australia Bureau of Statistics is releasing a preliminary version two weeks ahead of time, which – surprise surprise! – was for a 0.6% mom rise. 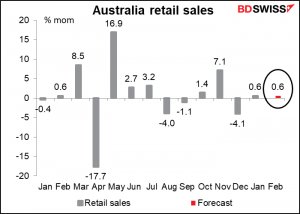 The trade balance is expected to be almost exactly the same as in the previous month. 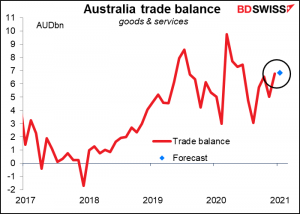 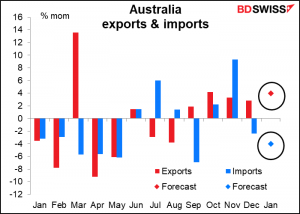 The country’s improving terms of trade is one of the factors supporting the AUD. 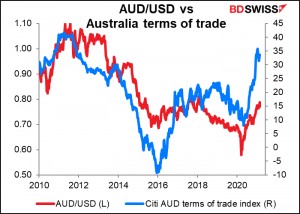 This has nothing to do with FX, but I saw it on Twitter and found it amusing. Apparently some Britons are surprised that now that they’re out of the EU, they can’t stay on the Continent for more than 90 days a time without a visa. Even more amazingly, they blame Spain! Given that one of the main reasons for Britain leaving the EU was allegedly to regain control over Britain’s borders (i.e., to prevent people from the Continent moving to Britain) this must rank as one of the greatest “cake-isms” of the event (as in, trying to “have your cake and eat it too.”) 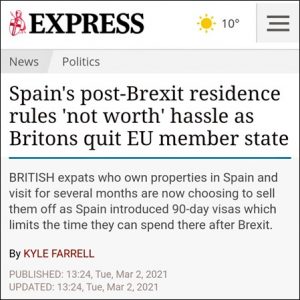 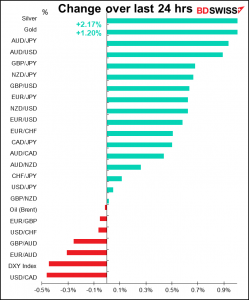