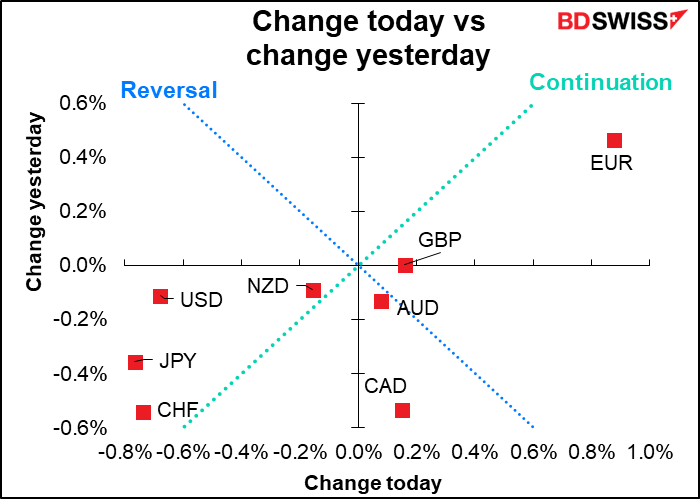 Wild volatility in the markets!

Stock markets rose – in some cases, soared – and commodity prices fell following remarks from a top foreign policy aide to Ukrainian President Volodymyr Zelensky on Wednesday. The official said Ukraine is open to discussing Russia’s demand of neutrality as long as it’s given security guarantees — though it won’t surrender a “single inch” of territory. Furthermore, the Russian and Ukrainian foreign ministers will meet today in Turkey. This will be the first cabinet-level meeting between the two sides since the invasion began. The meeting hopes to pave the way for a meeting between President Zelensky and Putin.

Some of the commodities that have been strongly affected by the fighting, such as wheat, fell sharply. Bloomberg’s Commodity Spot Index fell 5.20%, the biggest one-day fall since 2008.

Gold and silver came down as demand for safe-haven assets receded.

Oil plunged after the United Arab Emirates (UAE) ambassador to Washington called for OPEC+ to increase production. The European benchmark Brent was down 13.7% this morning from where it was yesterday morning.

The UAE seems to be alone in this position so far though. It’s not obvious that it will result in anything more than another argument between the UAE and Saudi Arabia.

At the same time, the talks toward a renewed nuclear deal with Iran are making further progress, although a final agreement remains out of reach. And US Energy Secretary Granholm urged domestic producers to increase oil output and said that US energy strategy was on an emergency “war footing.”

The euphoria about a possible settlement sent EUR sharply higher and the safe-haven JPY, CHF, and USD lower.

I would warn that talking doesn’t equal settling. A lot depends on whether a settlement can be found that allows both sides to claim some degree of victory. Putin’s demands that Russian-speaking areas be carved out of Ukraine and ceded to Russia may be a step too far for any leader to concede. There’s bound to be more volatility to come, but at least we know now that the market movements won’t all be in one direction. 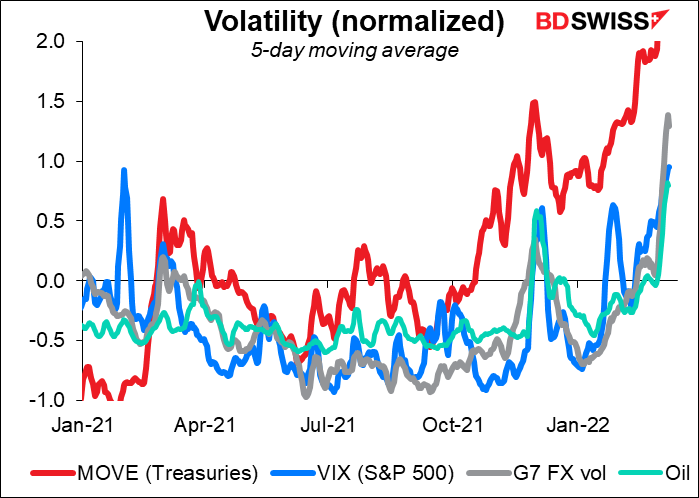 AUD was little changed even though Reserve Bank of Australia (RBA) Gov. Lowe set the stage for a possible hike in rates, saying “it is plausible that the cash rate will be increased later this year.” AUD/NZD moved slightly higher but that seems to have been more due to the general improvement in risk sentiment rather than Gov. Lowe’s statement. After all, he was just acknowledging what everyone else has been thinking for some time, as reflected in market pricing of a rate hike by June or July. 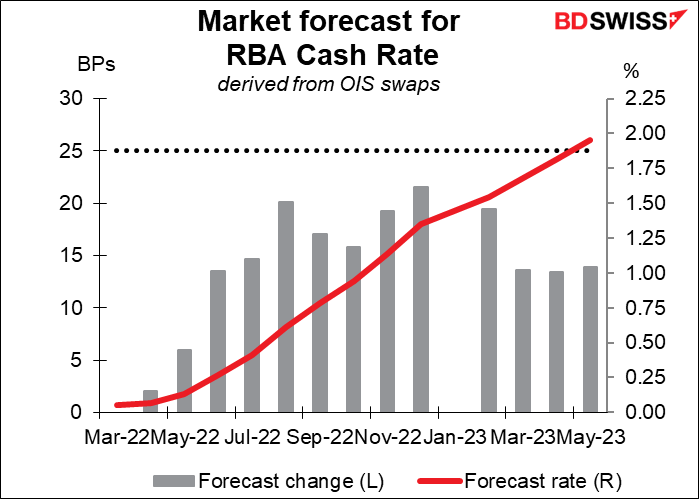 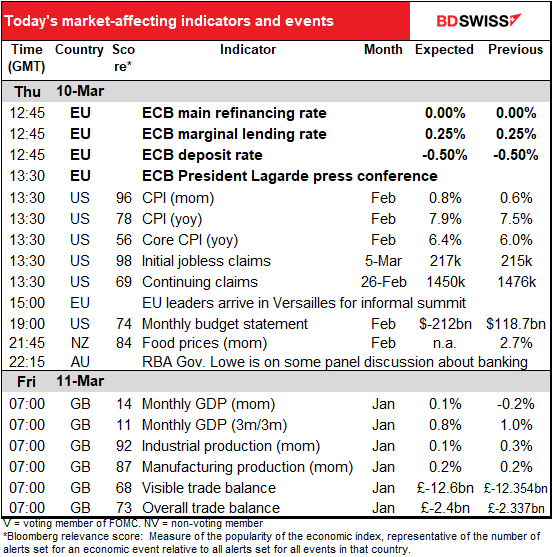 Today’s a really big day for the markets. Three crucial events: 1) the European Central Bank (ECB) meets; 2) the US consumer price index (CPI) is released, and 3) there will be an informal meeting of the EU heads to discuss “Russia’s aggression against Ukraine” and “Strengthening European sovereignty.”

I wrote about the first two of these events in my Weekly Outlook, The return of stagflation?  And for the ECB, I also did a major piece that ran on the NASDAQ website, March ECB Meeting: Hawkishly Neutral?  Which you are of course welcome to read if you want to know the nuts-and-bolts. But here I’ll just summarize here what I said in these other pieces.

For the ECB, the big question they will address at this meeting is, how will the fighting in Ukraine affect the inflation outlook? The impact isn’t clear. On the one hand, surging commodity prices, particularly oil and gas, are bound to push up inflation and keep it elevated longer than anticipated. On the other hand, the increase in uncertainty caused by the fighting, plus the hit to consumer spending from higher food and energy costs, is bound to dampen the economy. So do they tighten or loosen?

They will get new staff forecasts at this meeting. In normal times, if the crucial 2024 forecast for inflation is at the 2% target or above, that would trigger the start of policy normalization. 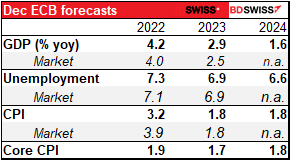 This time however they are likely to put the normalization process on pause while they wait to see how things develop in Ukraine. However, this would just mean policy normalization is delayed, not derailed.

The market reaction is therefore likely to depend on what they say about the fighting and how long it’s likely to delay them. I expect them to stress that their decision will depend on the duration and extent of the Ukraine conflict, which no one has any solid insight into. The delay to “lift-off” is likely to weaken the euro further, in my view. 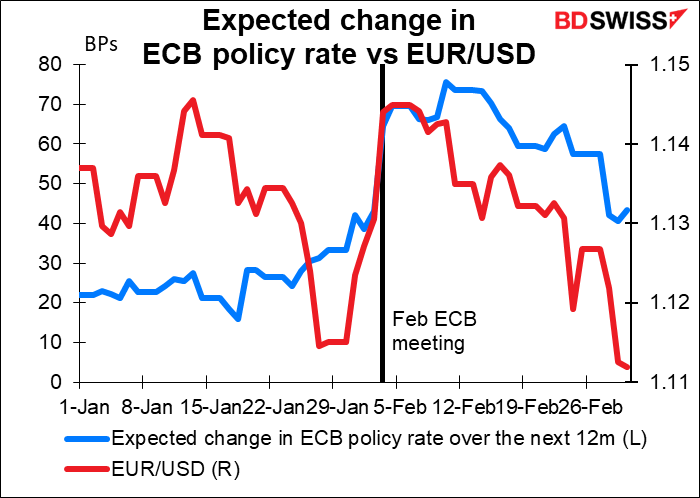 It comes exactly a week before the meeting of the rate-setting Federal Open Market Committee and so will set the tone for that meeting. But Fed Chair Powell already told Congress that he would propose a 25 bps rate hike at that meeting. 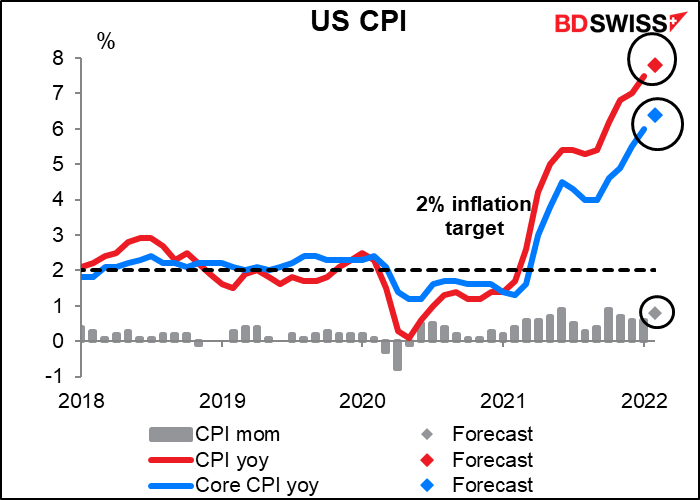 Nonetheless, if it beats expectations (as usual: 8 beats, 4 equals, 1 miss since Jan. 2021), it could increase expectations for rate hikes later in the year which could be positive for the dollar. 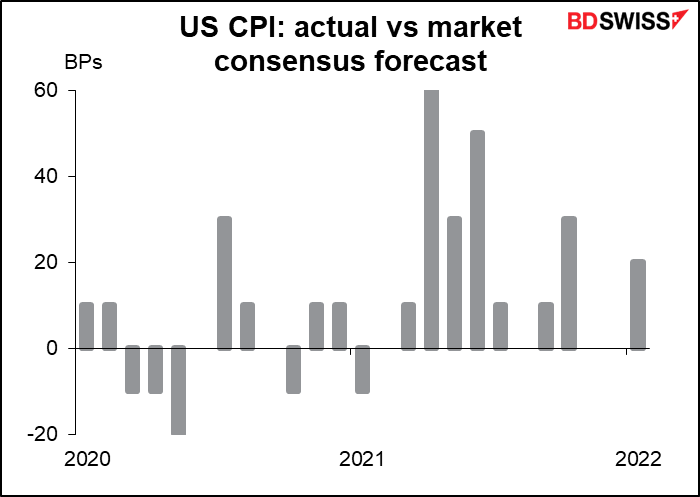 The graph shows the response of EUR/USD to the figure, but USD/JPY is probably the best currency pair to play it with if you’re interested, especially for the half hour or hour following the release. Note though that EUR/USD both rose and fell on positive surprises meaning that it may not work just to assume higher-than-expected = USD+, especially after 30 minutes.

As for the EU summit, according to the EU website, “EU leaders will discuss the latest developments of the conflict and its consequences during the informal meeting.” They will also discuss “how to strengthen European sovereignty, reduce dependencies and design a new growth and investment model.” This involves “three key issues: 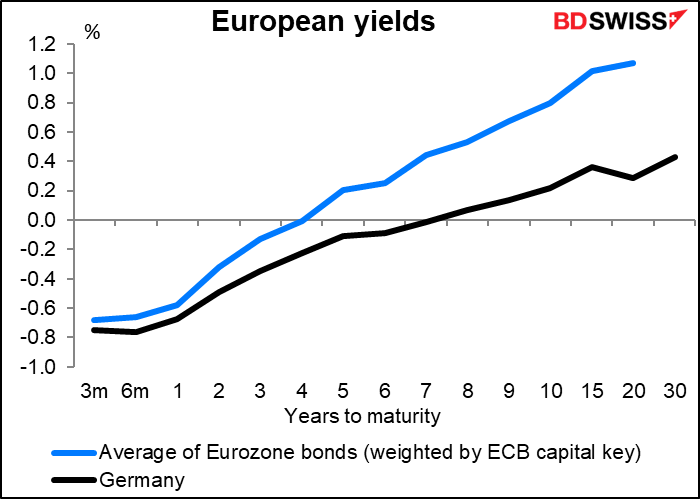 According to the Financial Times, a French official said that the summit will see the “first exchanges” on the possibility of a new European resilience and investment plan, with a particular focus on energy and defense. Some of the northern European countries are not so keen on the idea though so there’s likely to be some debate about it.

US initial jobless claims are expected to be up 4k after being down 18k the previous week. Really they’re just moving sideways and no longer a big deal. 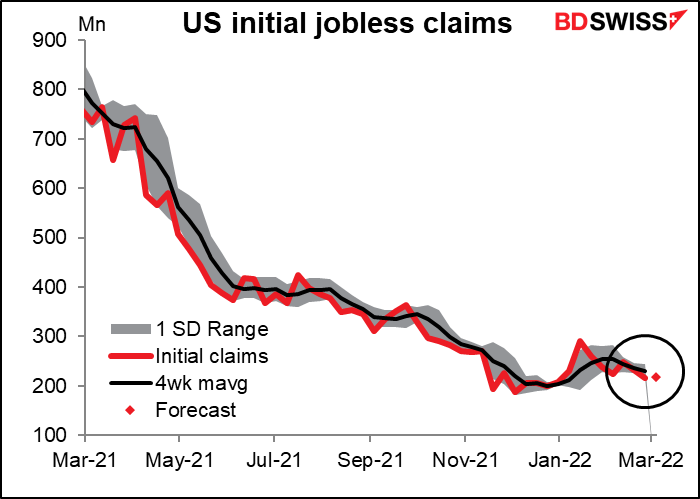 Then that’s about it for the important indicators. By looking at the Bloomberg relevance score you might think that New Zealand food prices are important, but that’s just because they’re a big part of the CPI and people with inflation-linked bonds worry about the figure.

So then we wait until early Friday morning and the UK short-term indicator day, which is the day that they release several indicators that help us to determine the direction of the economy over the near term.

First and foremost among these is the monthly UK GDP figure.

Growth momentum was slowing at the end of the year under the weight of the omicron variant and the market expects only a small increase in output in January. Household consumption has been slowing as the cost of living rises, plus business investment remains pretty sluggish. Finally, some of the growth came from increased health spending thanks to more testing and vaccinations – that too has fallen off.

Still, I think as long as output doesn’t contract in January, people will be looking forward to a stronger rebound in February, when the “Plan B” restrictions came off, and the Bank of England is likely to remain on a tightening trend. That should be positive for GBP. 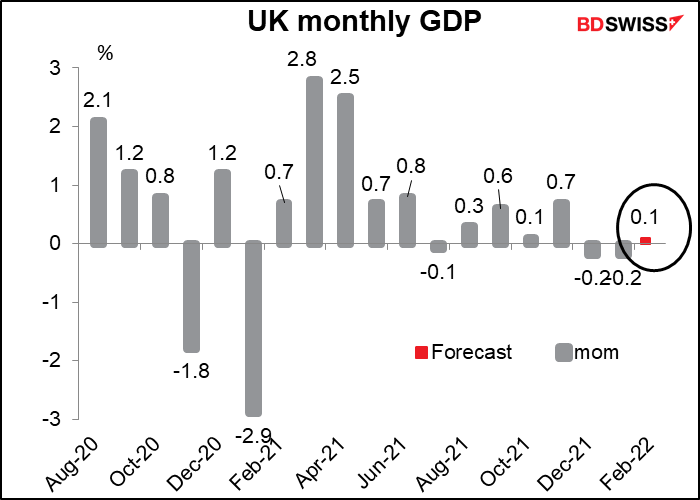 Reflecting the sluggish rebound, industrial & manufacturing output are both expected to be up only +0.1% mom (hence only one dot visible in the chart). 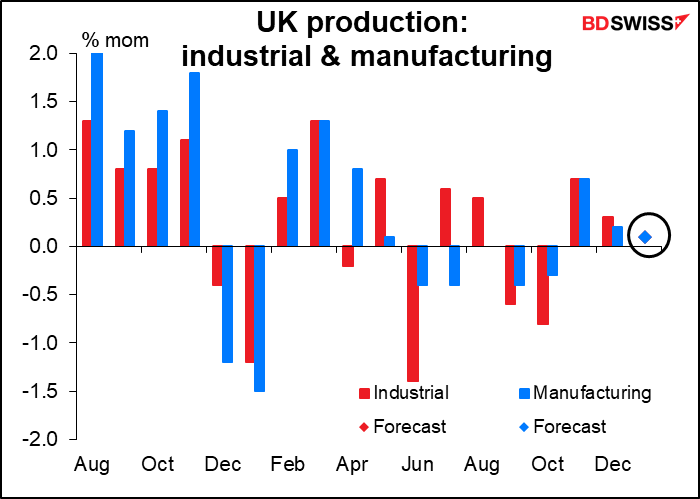 The trade figures are expected to be little changed. 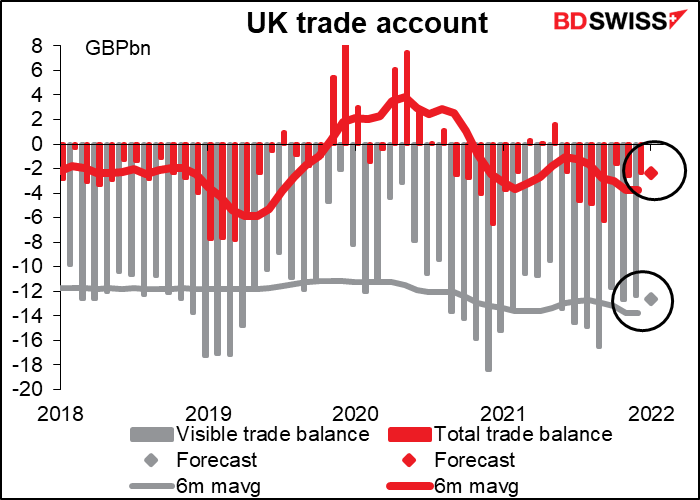 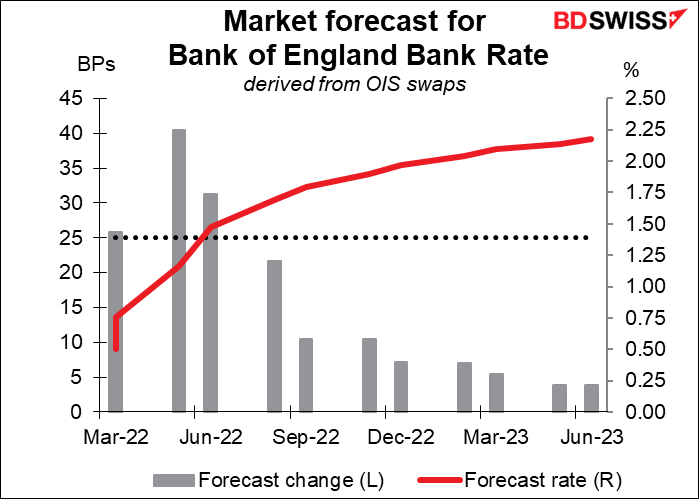 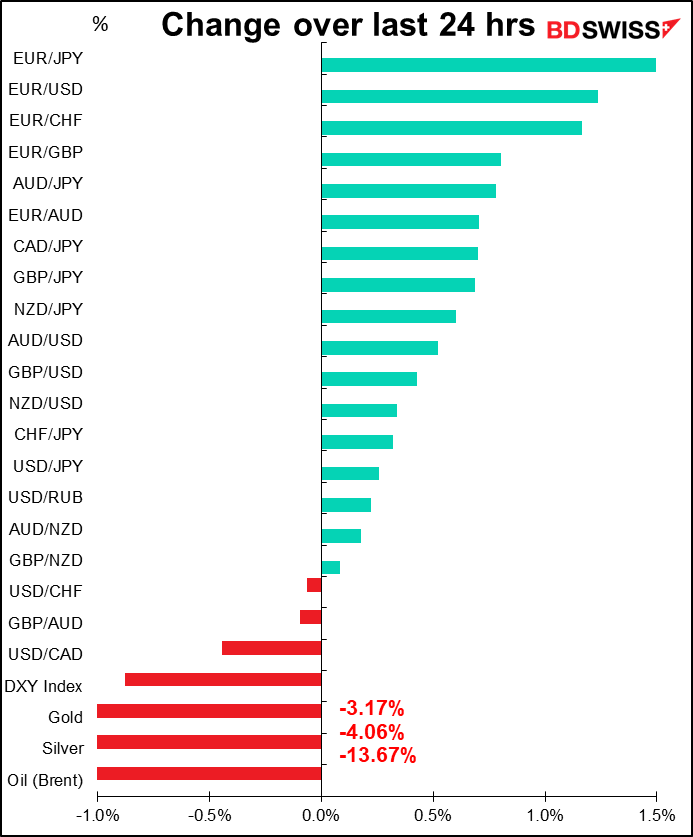