You are at:Home»Market Preview»Commodity Currencies Up, USD Down as Oil Roars Back; US Leading Index 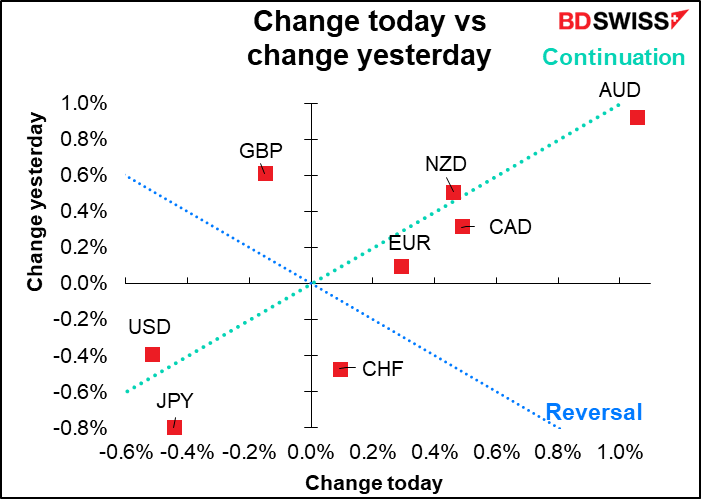 In fact maybe I wasn’t exactly right – as it turns out the Bank of England was even more dovish than I had expected. In February the Monetary Policy Committee (MPC) voted 5-4 to hike by 25 bps, with the four dissenters wanting a 50 bps hike. I expected there would be fewer people wanting a 50 bps hike this time and that that would surprise the market and weaken the pound. But what I didn’t expect – and indeed few if any people expected – is that not only would there be no votes for 50 bps but indeed the only dissenter would be someone who wanted to keep rates unchanged! Deputy Gov. Cunliffe wanted to keep rates steady owing to the uncertainty caused by the Ukraine invasion.

Given the sharp rise in inflation and inflation expectations in Britain, the market clearly expected a split in the other direction: that if there were any dissents they’d be in favor of a bigger hike, not to keep rates on hold. The plunge in GBP/USD in a few seconds from 1.3202 to 1.3091 shows what a surprise this was.

And whereas the Fed’s estimates for rates were above what the market had already priced in, the Bank of England’s Monetary Policy Committee (MPC) tried to push back against market expectations for the pace and extent of future rate hikes. They softened their forward guidance, from “some further modest tightening in monetary policy is likely to be appropriate in the coming months” to “…may be appropriate…but there are risks on both sides of that judgment” (emphasis added).

As a result, rate expectations fell, with the market pricing out about half a rate hike over the next year or so, and little chance of a 50 bps hike any time. 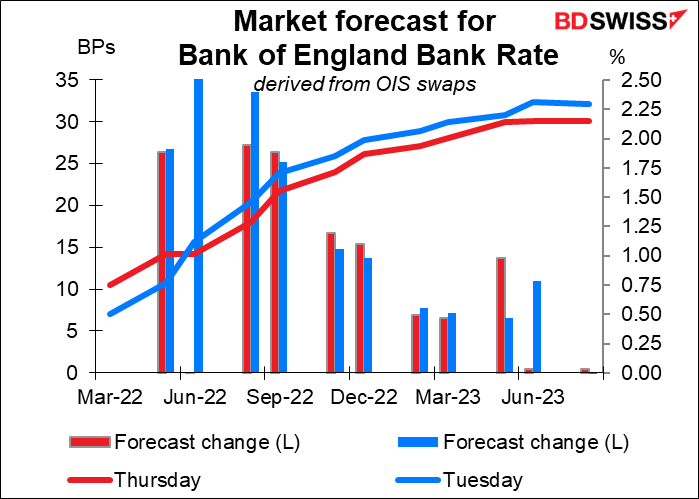 The question then is: why is GBP up modestly vs USD this morning? Why is USD at the bottom of my trade-weighted index table?

Once again, the dollar is trading along with “risk,” not monetary policy, as shown by the close co-movement of the USD trade-weighted index and the S&P 500 futures (inverted).

So the next question has to be, why did stocks do so well when oil prices were soaring? The US benchmark crude West Texas Intermediate (WTI) is up 9.6% this morning over where it was this time yesterday, the biggest jump in 16 months apparently. But the S&P 500 was up 1.2% yesterday and most Asian stock markets are up this morning too, e.g. Tokyo’s Nikkei index is +0.7% (except Hong Kong’s Hang Seng index, -0.2%).

Oil is up after a Russian spokesman said yesterday’s report in the FT of significant progress in negotiations over Ukraine was “incorrect,” but that discussions will continue.

US Secretary of State Blinken also played down the possibility of a negotiated settlement. “…Diplomacy obviously requires both sides engaging in good faith to de-escalate,” Blinken said in a press conference Thursday. “The actions that we’re seeing Russia take every single day, virtually every minute of every day, are in total contrast to any serious diplomatic effort to end the war.”

Some analysts have suggested that the negotiations are simply a stalling mechanism for Russia so that it can resupply its troops, which are bogged down in Ukraine.

Still, there were some encouraging developments regarding China. Chinese media has started reporting that Russian troops are killing civilians, which could be how they prepare the public for a change in China’s stance toward the conflict. Meanwhile, Russian Foreign Minister Lavrov’s plane was in flight to Beijing when it turned around and returned to Moscow and China’s UN envoy called for “maximum restraint” in the Ukraine war. This suggests the Chinese have taken to heart US President Biden’s warnings that China would face “costs” if it rescued Russia by providing them with military gear and financial assistance. President Biden is slated to speak with Chinese President Xi today. If China turns against Russia, then its isolation will be nearly complete. That will make it much more difficult for Russia to continue to pursue the war.

So…getting back to stock markets: why were stocks up when oil was up too? One reason of course was that the oil sector did quite well.The bigger reason may be that Russia managed to make some coupon payments in dollars to bond holders, according to Reuters. The Russian finance ministry said that it had sent funds to cover $117mn in coupon payments on two dollar-denominated sovereign bonds. These coupons are the first of several, with another $615mn falling due over the rest of the month. The first principal payment is due on April 4 when a $2bn bond matures. The fact that they received payment suggests that the sanctions will not cause a sovereign default, which was encouraging. Russian companies too have nearly $100bn in hard currency bonds outstanding, of which around a fifth are held by international investors.

As a result, the spread of Russian bonds over US Treasuries has come in considerably, although it remains a multiple of where it was before the invasion. 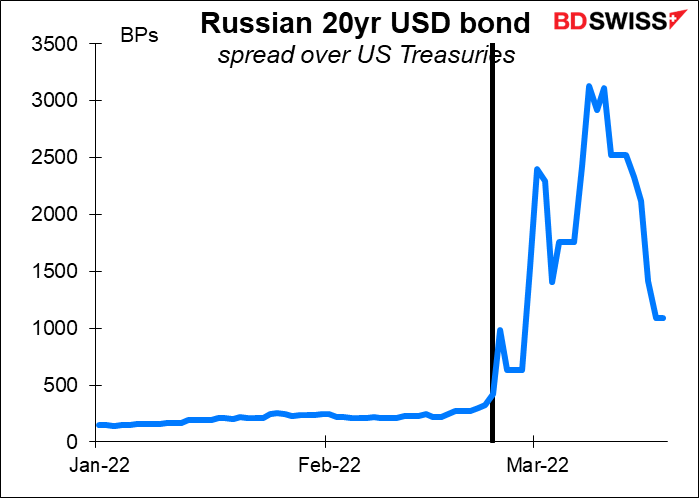 As for the Bank of Japan meeting, that went as expected, with the BoJ holding policy steady once again (surprise surprise). It warned of risks from COVID-19 and “extremely high uncertainties” from the war in Ukraine and downgraded its economic assessment just two months after it was upgraded. Against this background, the BoJ is likely to be the last central bank to start tightening, which means JPY can probably continue to weaken so long as risk sentiment doesn’t dominate.

Japan’s national CPI was in line with expectations at +0.9% yoy and the core rate (excluding fresh food) at +0.6% yoy. The BoJ said that “The year-on-year rate of change in the CPI (all items less fresh food) is likely to increase clearly in positive territory for the time being due to a significant rise in energy prices, a pass-through of raw material cost increases, and dissipation of the effects of the reduction in mobile phone charges.” So get ready for a change in the Japan inflation picture in April, once mobile phone charges drop out of the calculation.

Separately, Dutch central bank governor and ECB Governing Council Member Knot said a rate hike this year is “a realistic expectation but by no means a certainty.” He also didn’t rule out two rate hikes. He stressed that inflation is currently the central bank’s main concern. 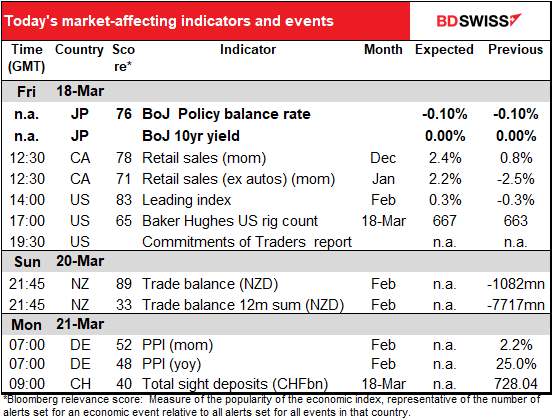 With the Bank of Japan meeting and BoJ Gov. Kuroda’s press conference out of the way, there’s nothing on the schedule until North America opens for business and Canada announces its retail sales. They’re expected to be up a pretty healthy amount, much higher than average for the last six months (+0.3% mom). Auto sales rose during the month and gasoline station receipts will probably be boosted by higher pump prices. 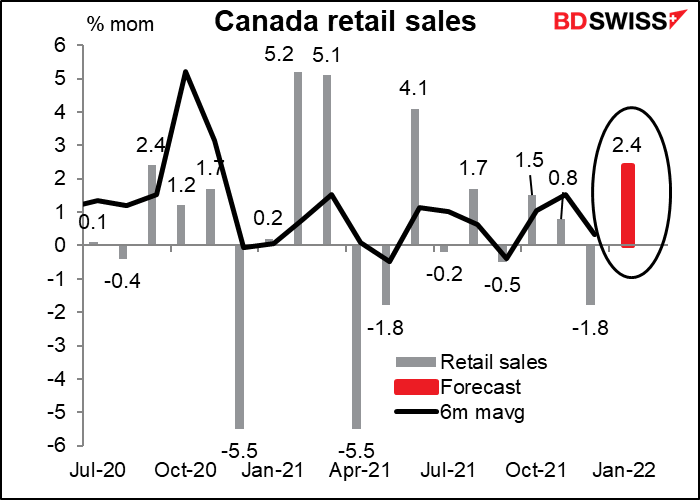 If you want to trade the figures, I suggest you trade them quickly! USD/CAD responds in a fairly predictable way to the data in the first five minutes, but the correlation fades quickly after that. It’s even worse for the ex-autos figure, at least over the last year. 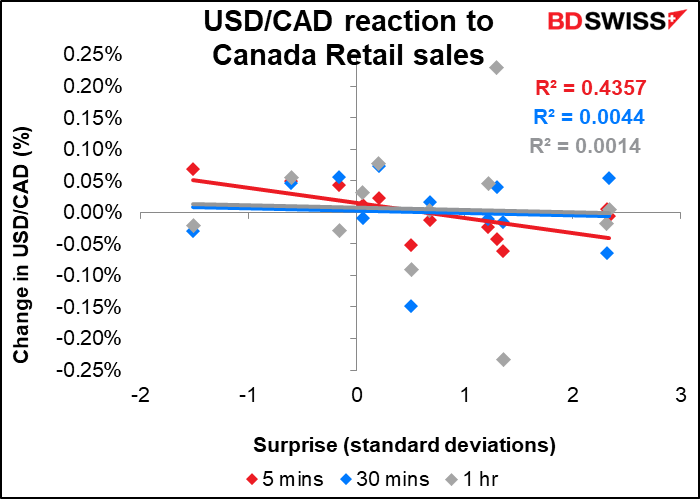 Or you might want to trade EUR/CAD rather than USD/CAD the five-minute correlation between the two is similar, but EUR/CAD has a better correlation after one hour. This may be because USD/CAD will be affected by any US indicators coming out at that time whereas EUR/CAD wouldn’t be. 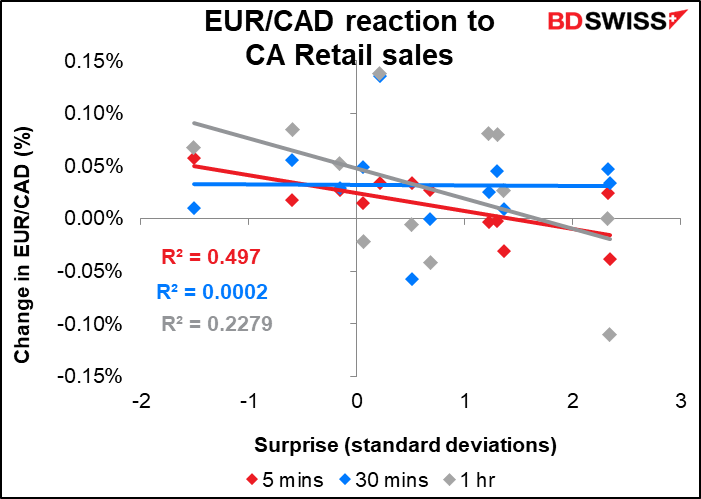 The US leading index is expected to rise modestly. That’s better than the previous month’s decline but it’s still expected to be below trend, showing a slowdown in the US economy. This would be consistent with what we’ve seen from a few other statistics, such as the Empire State manufacturing index, which unexpectedly plunged into negative territory for March. The Atlanta Fed’s GDPNow forecast for Q1 GDP is +0.5% qoq SAAR, a slowdown from +3.1% in Q4 of last year. 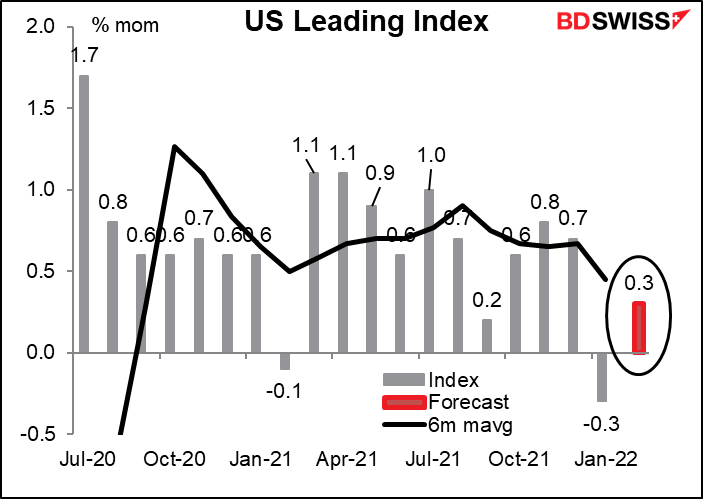 Then early Monday, New Zealand announces its trade data. There are no forecasts for it but I love making graphs so here’s a graph anyway. As you can see from the 12-month moving average, it’s trending lower (i.e. the trade deficit is tending to widen). There would have to be a trade surplus of NZD 206mn for the 12-month moving average to remain unchanged at NZD -643mn. That would be almost the same as last February’s surplus (+205mn), so it’s not out of the realm of the possible. The Lunar New Year in China was in the beginning of February this year and was in the middle of February last year, so it probably caused more disruption to New Zealand’s trade with China last year than this year. 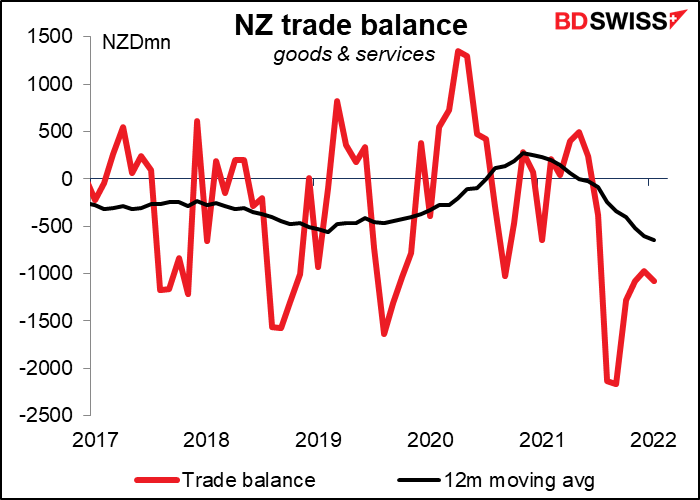 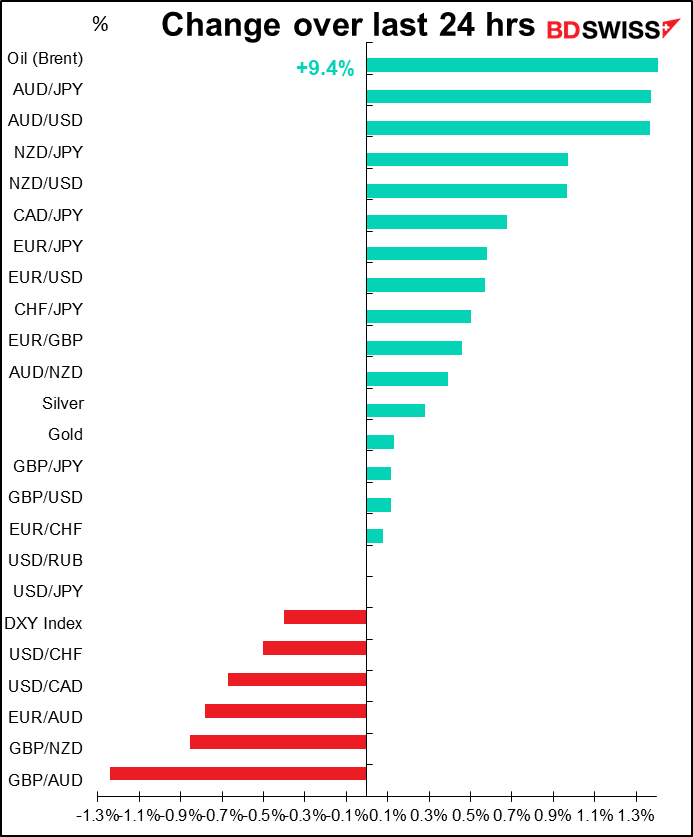