You are at:Home»Market Preview»AUD Up, NZD Down; US Jobless Claims, Existing Home Sales, Japan CPI etc 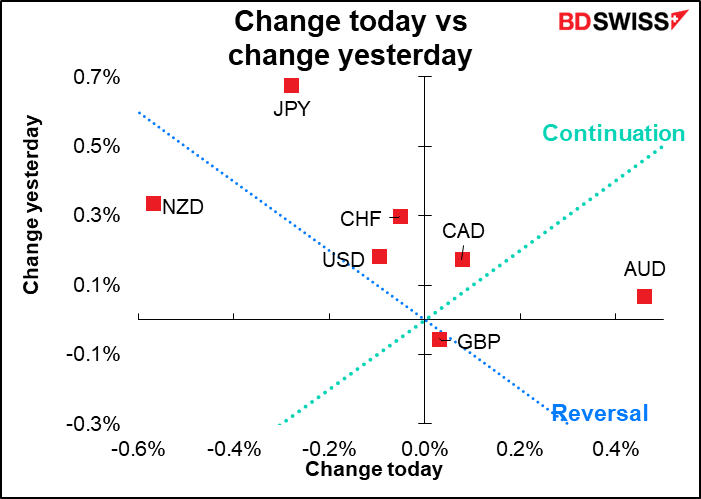 Interesting day when AUD is at the top of the list and NZD is at the bottom.

AUD rallied during most of the European day yesterday. It fell back a bit during the US day. Then this morning it took another leg up after the employment data came out. The change in employment was pretty much as expected, but the unemployment rate fell by much more than expected to the lowest level since 2008, and with a steady participation rate – a good sign. Moreover, most of the new jobs were full-time employment as well.

The result was an increase in expectations that the Reserve Bank of Australia (RBA) would tighten policy this year. Westpac issued a report saying that they now expect the RBA to start raising rates in August, vs the RBA’s forecast that it won’t be in a position to start hiking rates until late in 2023. The market is forecasting a rate hike in June and at least two more hikes during the year. We’ll get an updated view on the RBA’s thinking when it holds its first meeting of the year on Feb. 1st.

The mystery to me though is why NZD was down so much. The immediate answer is probably that people buying AUD did so vs NZD, but that fails to explain why they were taking that position when NZD yields jumped so much more than AUD yields did. The NZD move was aided but not caused by one of the local banks revising up their call for the Reserve Bank of New Zealand (RBNZ)’s official cash rate to hit a peak of 3%. I think the rise in AUD/NZD is unwarranted and I would expect it to fall back somewhat today. 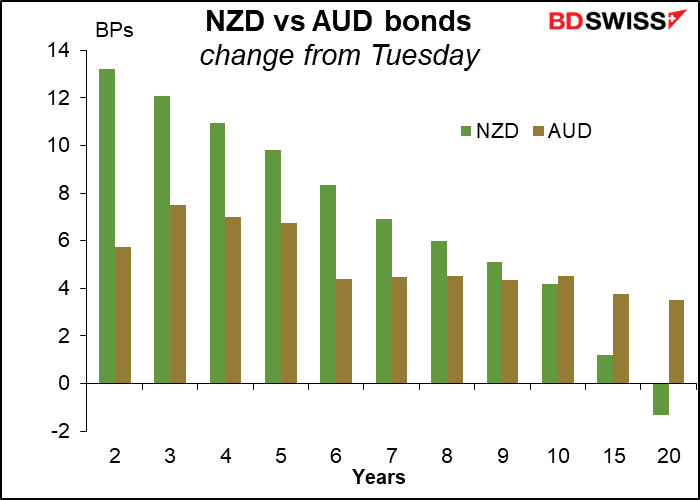 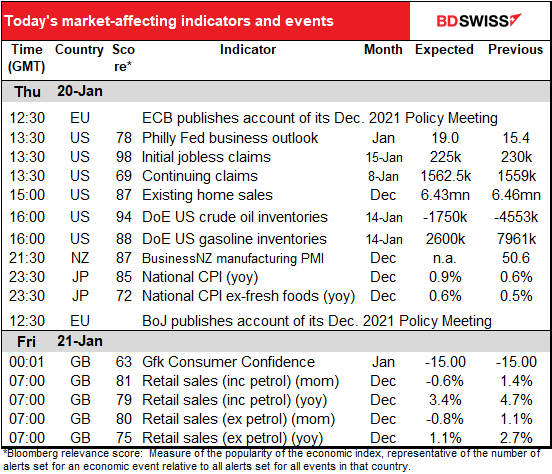 A quiet morning in Europe.

In the afternoon, the European Central Bank (ECB) publishes the account of its December meeting. That’s when the ECB confirmed that its Pandemic Emergency Purchase Programme (PEPP) would slow the pace of its bond-buying and stop buying bonds entirely at the end of March (as expected). That was a turning point for ECB policy. The account will therefore be read to understand further what caused the Governing Council to change tack and especially how they might react if inflation doesn’t come down as quickly as they are forecasting. They’ve become much more focused on flexibility recently and so they may have some contingency plans for what they’d do if things don’t work out as they expect.

Then it’s the Philadelphia Fed business outlook. The market expects it to be slightly higher. Tuesday’s Empire State manufacturing survey was expected to be a bit lower, perhaps the idea being that the two would converge. In the event, the Empire State index plunged (-0.7 from +31.9, +25.0 expected) as the region was hit by the Omicron variant. However, this headline figure is a gauge of general business conditions and isn’t calculated from the components of the index, like other similar indices such as the Purchasing Managers’ Indices (PMIs) are. Some of the sub-indices, such as for future prices and orders, weren’t as bad as the headline suggests. 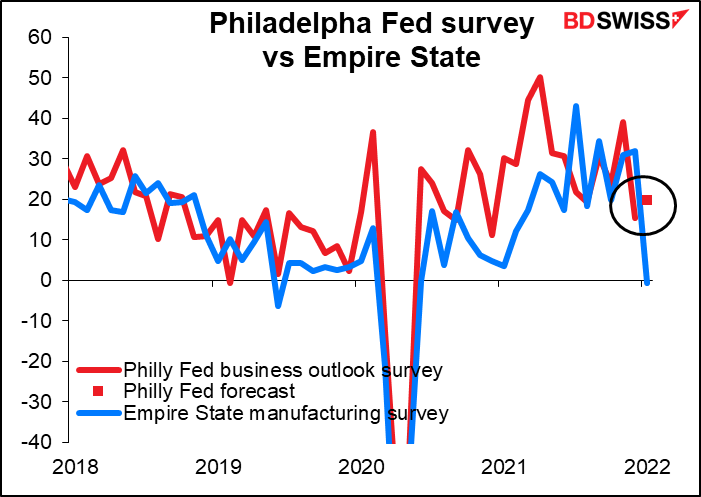 Are initial jobless claims trending upward? They hit a near-record-low of 188k the first week of December, only to bounce back up to 230k last week, above the 4-week moving average of 211k. Last week there was a surprise rise of 23k, the biggest rise since early September. That suggests the dreaded Omicron variant has disrupted the labor market somewhat. This week’s figure is particularly significant because it’s the week that the survey for the January payrolls data is being taken. A bad number could give the Fed cause to pause. It’s expected to show a small decline again (-5k) while remaining within the recent range. 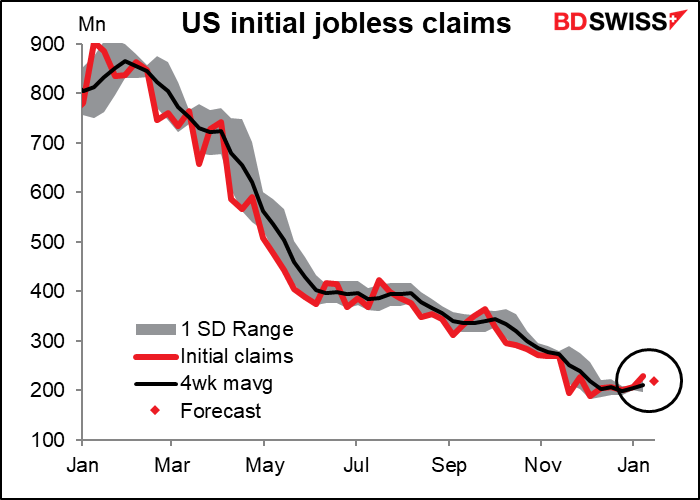 Then again, several Fed officials last week said that while Omicron may pose risks to economic activity in the near-term, they don’t expect a lasting impact given continued progress on vaccinations (although the fact is, the US lags behind most other countries in vaccinating people, mostly because it’s become a political issue –  a Gallup poll in September found 56% of Republicans had been vaccinated, vs 92% of Democrats and 68% of independents. Others say it’s an age thing, but in that case, Republicans – who tend to be older than Democrats – should have a higher vaccination rate.) 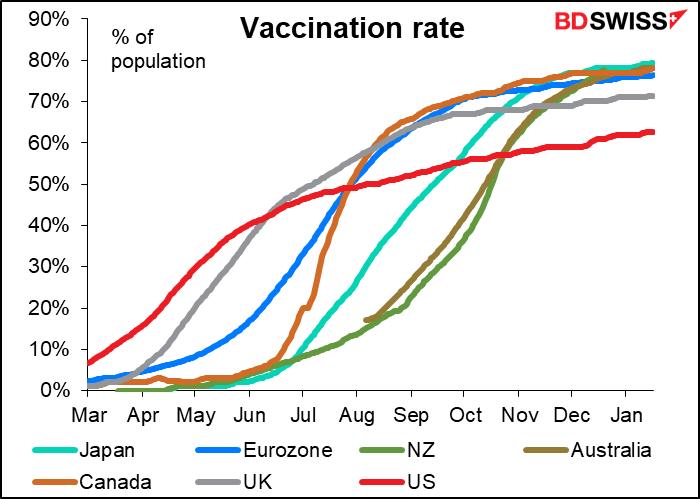 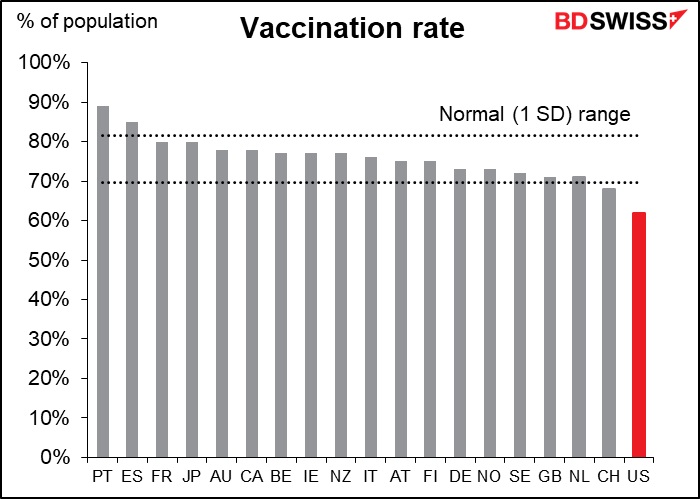 Continuing claims on the other hand just keep falling and falling. 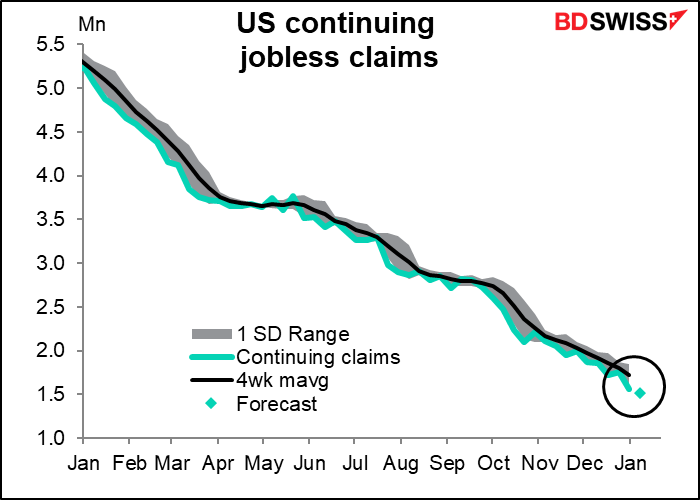 Is that because more and more people are getting jobs, or because more and more people are becoming ineligible for unemployment benefits? Probably the former, because the average length of unemployment seems to be falling. At least, the percent of people unemployed for 27 weeks and over – the group in danger of falling off the unemployment rolls — has been declining. (The median length of unemployment, 12.9 weeks, is down from the post-pandemic peak of 19.6 weeks but still well above the 2019 average of 9.2 weeks.) 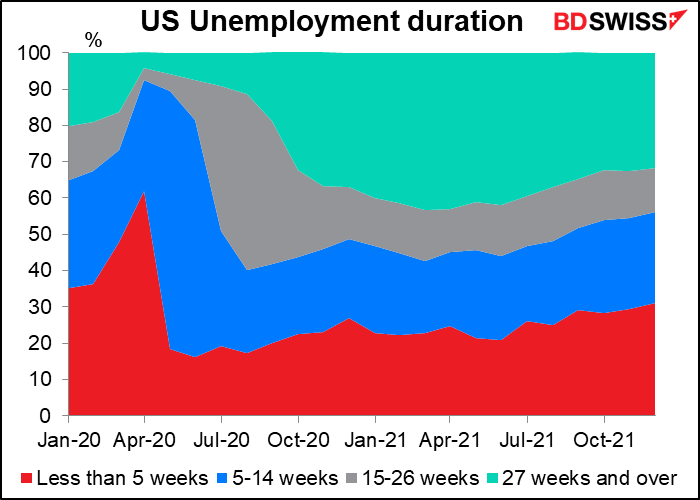 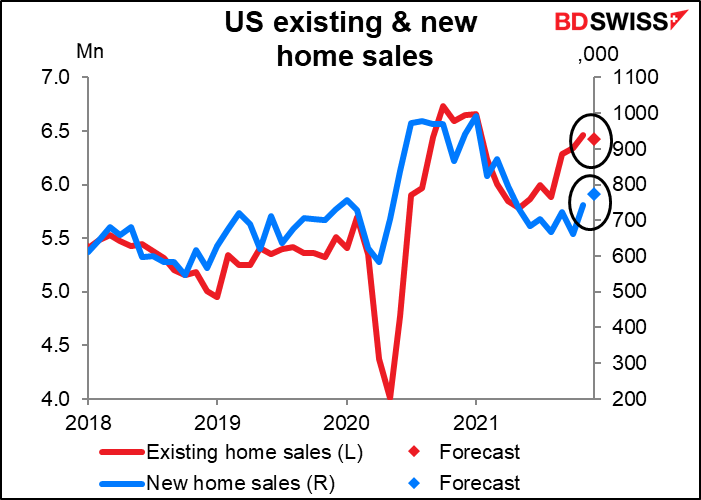 Then we sit back and wait for the Tokyo market to open and the release of the Japan national consumer price index (CPI). It’s forecast to rise 30 bps to 0.90% yoy, slightly above the Tokyo CPI (+0.8% yoy). But the BoJ’s “core-core” measure, which excludes both food and energy (in line with most countries’ “core” measures of inflation) is expected to remain at -0.6% yoy. While headline inflation may be rising, it’s hard to see the Bank of Japan normalizing policy any time soon when the country is still in deflation on that measure. 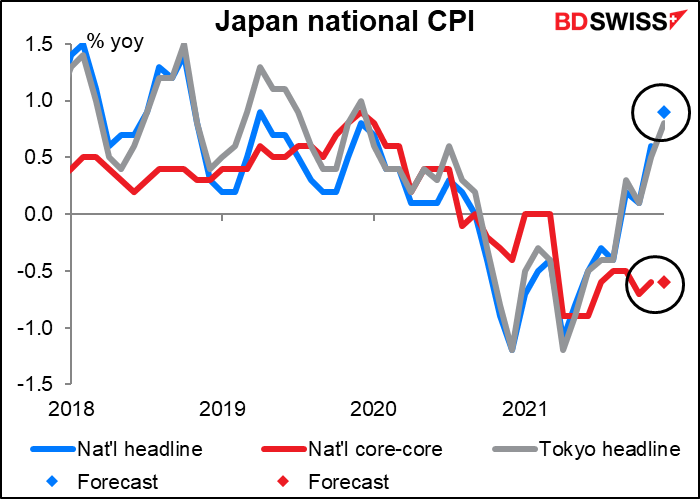 Although as I mentioned Tuesday, much if not most of the decline in prices is due to mobile phone charges, which the government has forced down. (According to the following graph from Morgan Stanley research, inflation would already be 2% yoy if it weren’t for this government-mandated move. Once the reduction in mobile phone charges falls out of the yoy calculation we could see a very rapid change in the inflation picture in Japan and a correspondingly rapid change in the market’s view of JPY. 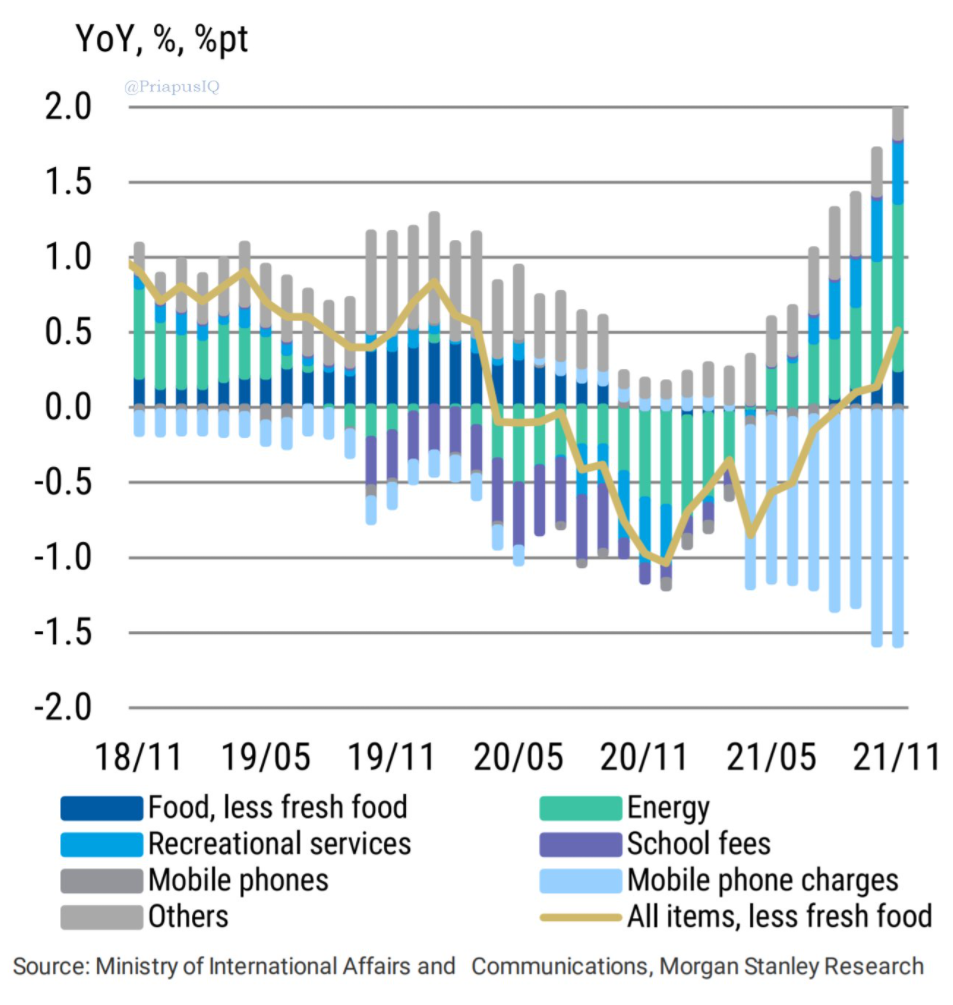 The BoJ also releases the minutes of its December Monetary Policy Meeting. The focus will be on what discussion if any they had regarding the possible decrease in the monetary base as they ended part of their pandemic financial support measures.

Then we wait for dawn over London and the UK retail sales figures. The data will be important in that they will give the market the first sense of the impact of ‘Plan B’ restrictions. They’re expected to fall mom because a lot of the spending that usually takes place in December took place instead during the blow-out Black Friday sales in November. Moreover, the spread of Omicron during December slowed attendance at footfall games. At the margin this could be negative for GBP, but I think people are more concerned about inflation and the Bank of England. Yesterday’s higher-than-expected CPI (+5.4% yoy vs +5.2% expected) sent rate expectations for March up only 3 bps and for end-2022 up 4 bps, which makes me think that Bank of England action is already baked into the price pretty solidly. The market is convinced that the Bank will tighten and even a disappointing figure probably won’t affect GBP. 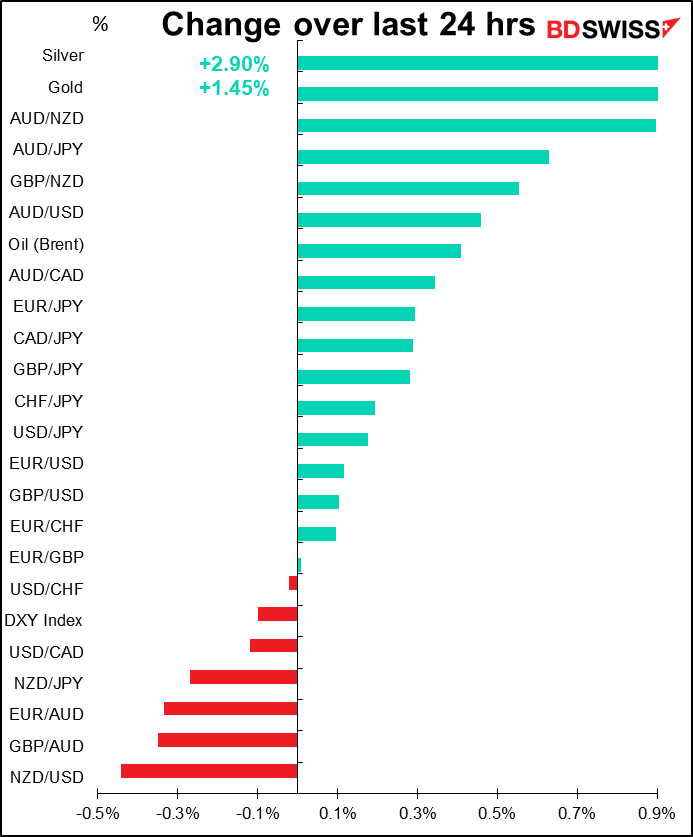