You are at:Home»Market Preview»EUR Weakens Despite ECB Surprise; EU summit, U of M Consumer Sentiment 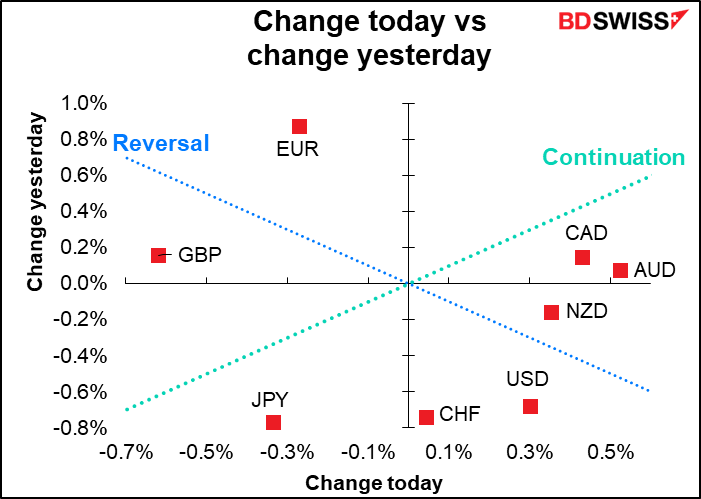 The question everyone had is, what will central banks do when confronted with rising inflation vs falling growth? Will they prioritize the fight against inflation or will they hold off to see how things go with Ukraine? 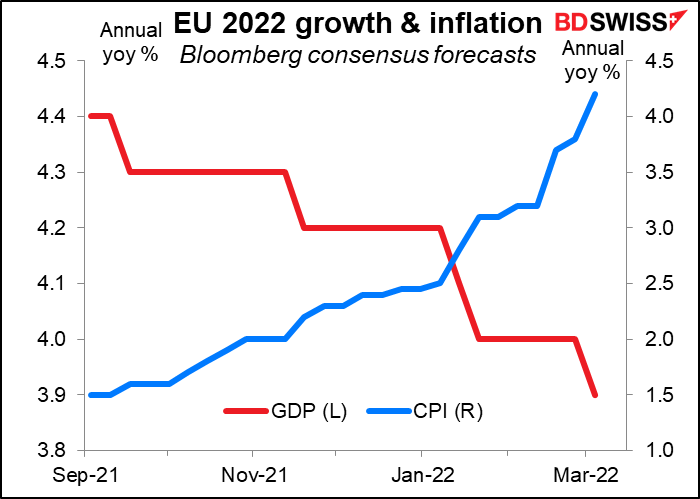 We got the answer from the European Central Bank (ECB): their mandate is inflation and that’s what they’re going to prioritize. Accordingly they took steps to reduce their aid to the markets.

They confirmed that their EUR 1.85tn Pandemic Emergency Purchase Programme (PEPP) would end on schedule by the end of March and said that they would taper down their Asset Purchase Programme (APP) faster than expected, down to EUR 20bn a month by June from EUR 40bn a month now, and will end them completely in Q3 if the data (and the economic situation) allow it. They provided guidance that “any adjustment to the key ECB interest rates will take place some time after the end” of the APP program and will be “gradual.” In other words, they could start raising rates “some time” after the June meeting, however long “some time” is. Note that this is a subtle change from what President Lagarde said in February, that rates would rise “shortly” after they ended the APP.

The tone at the press conference confirmed that their commitment is to “price stability,” not economic management. The Ukraine war is important to their thinking insofar as it affects their forecast for inflation.

I had thought that given the uncertainties of Ukraine they would hold off making any decisions at this meeting. Instead they went ahead and began tapering down their bond purchases but left open what would happen later. In short, they started normalization but retained “optionality” and “flexibility,” two of their recent buzzwords, for policy in the second half of the year.

As a result, expectations for Eurozone interest rates this year (red line) rose. They’re not back to where they were before the intervention (grey line) but they’re higher than they were a week ago (blue line). 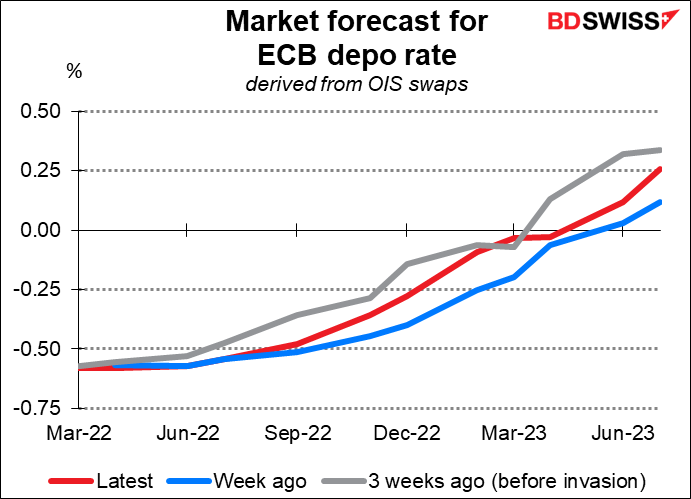 European bond yields rose across the curve on the news. 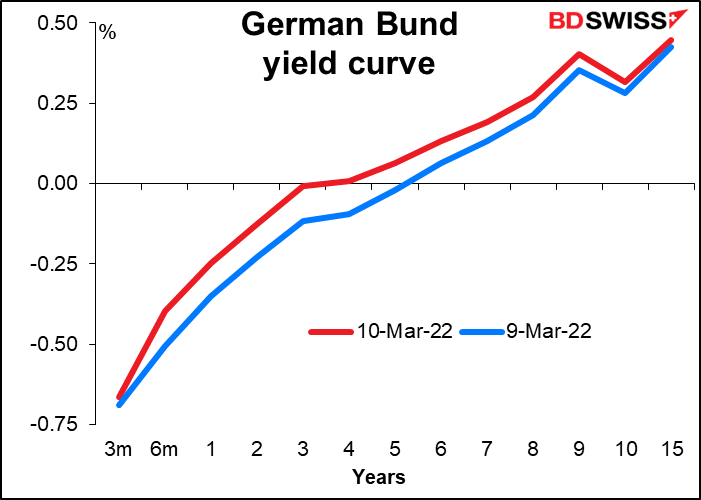 The curious thing to me though was that the euro didn’t benefit. It jumped on the news but then quickly lost all the gains. EUR/GBP is higher this morning but EUR/USD and EUR/CHF are lower. That may be because of the relatively dovish tone that President Lagarde adopted in the press conference. She emphasized the ECB’s new state-contingent forward guidance: any adjustments to policy rates will take place “some time after” the end of APP, not “shortly” after, as she said last month, and will depend on the data (“The calibration of our policies will remain data-dependent and reflect our evolving assessment of the outlook.”) This formulation is slightly more dovish than purely calendar-based guidance and leaves open the possibility that “lift-off” will be delayed into next year if the data disappoint.

Nor did the slight recovery in risk sentiment later in the day (as proxied by the S&P 500 futures) rescue the currency. 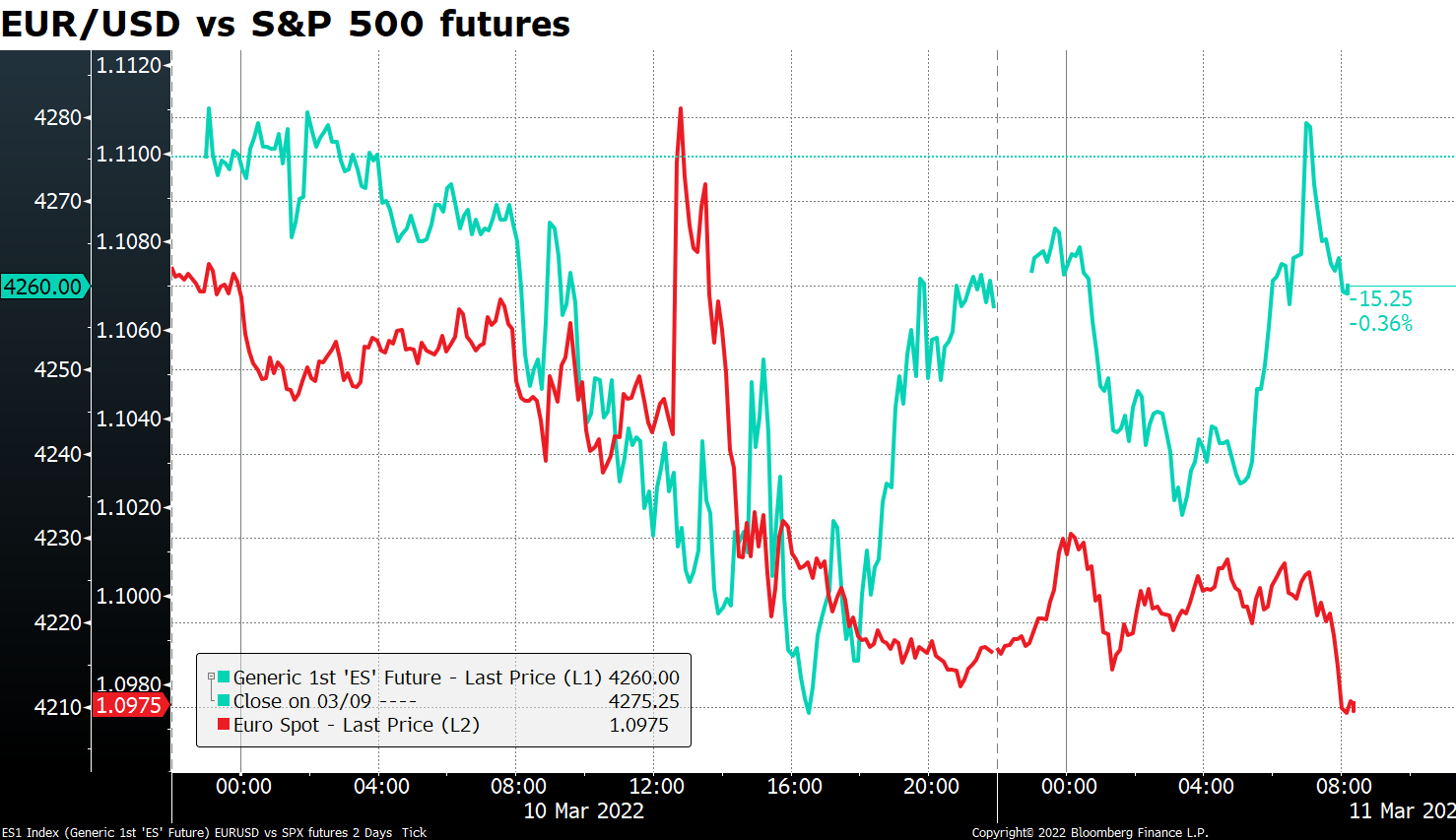 By the way, if you want to see some professional-level trolling, the Head of the National Agency on Corruption Prevention of Ukraine (NACP), Oleksandr Novikov, sent a thank you letter to the Minister of Defence of the Russian Federation, Sergei Shoigu, praising the latter’s efforts to ensure the high level of corruption in the Russian army. The letter observes that thanks to the high level of corruption, Russian troops are outfitted with bulletproof vests made of cardboard and transportation with no protection. 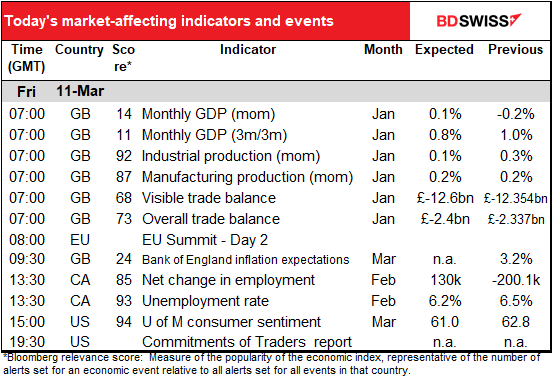 The UK short-term indicators – monthly GDP, industrial & manufacturing production, and trade – are already out. They were mostly better than expected, with GDP rising 0.8% mom instead of only +0.1% as forecast.

However the trade deficit blew up, with the visible deficit more than double expectations and the overall deficit widening to GBP 16.2bn vs GBP 2.4bn expected.  Imports of goods excluding precious metals increased 11% mom due to a surge in shipments from the EU while exports fell 8.7% mom, with sales to the EU down sharply. Thank you Brexit! 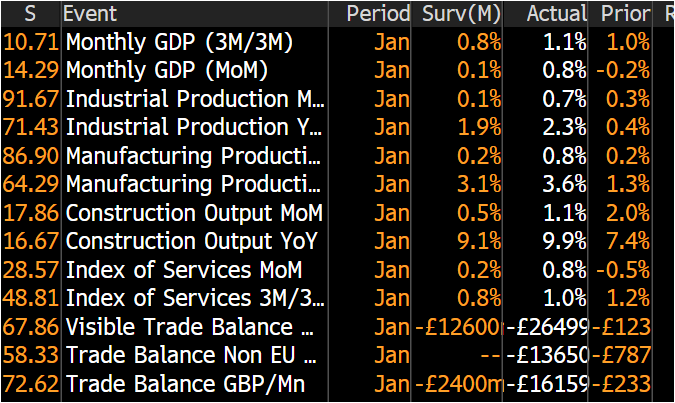 Today is Day Two of the European Summit. As I discussed yesterday, the European Council said the summit will discuss

Yesterday the group discussed Ukraine’s application to join the EU. The leaders issued a joint statement saying they would support Ukraine “in pursuing its European path,” but are split in how long they think that path should be. Some Eastern European countries want the bloc to give Ukraine’s application special consideration, but others replied that “there is no such thing as fast-tracking accession” (Dutch PM Mark Rutte). It was reported that the communique following the meeting would say that “Ukraine belongs to our European family,” which is a nice way of avoiding the issue.

Also, European Commission President von der Leyen outlined her plans to the group to propose in May measures to phase out Europe’s dependence on Russian fossil fuels by 2027. However there also seems to be a split there too, again with the Eastern European countries all in favor of further distance from Russia and the Western European countries that depend on Russian energy imports saying not so fast.

We await the press conference at the end of the meeting to hear what they have to say about these issues. 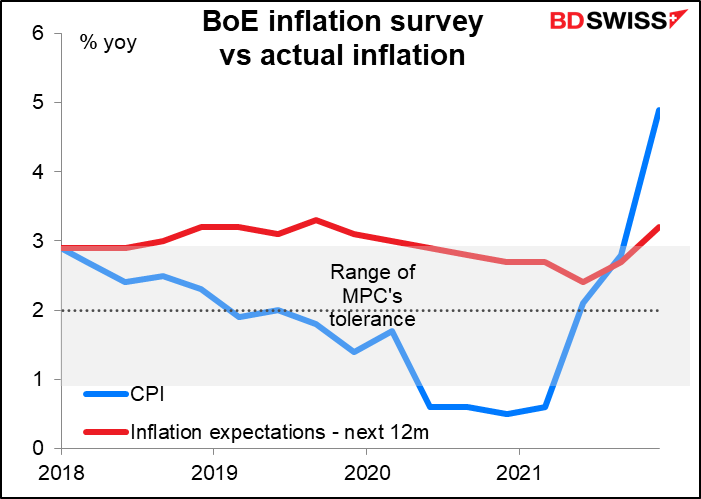 This is one of the rare months when Canada doesn’t announce its employment data at the same time as the US does but rather announces it the following week. The market looks for a fairly good increase in employment and a sharp in the unemployment rate. That’s only natural as the government relaxed some virus-related restrictions during the month. The news is likely to cement expectations of further Bank of Canada tightening and may therefore be positive for CAD. 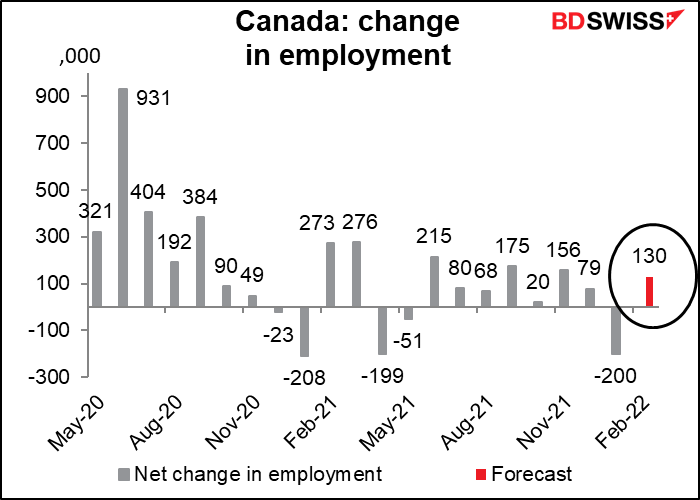 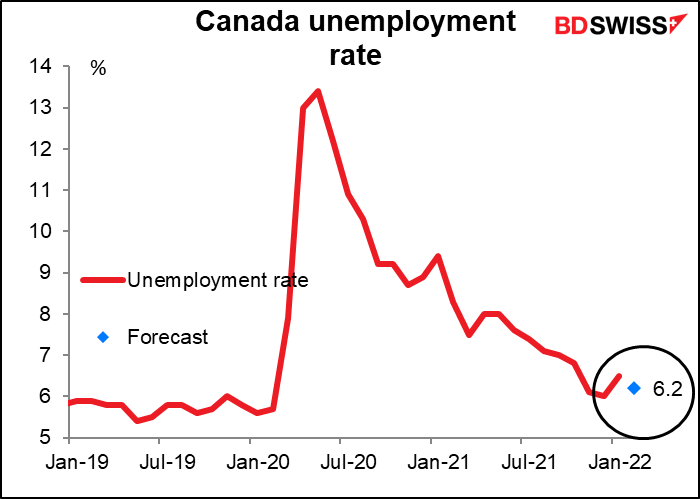 As for the US, the only point of interest is the University of Michigan consumer sentiment survey. This survey has been going down, down, down for ages and is expected to go further down this month too. 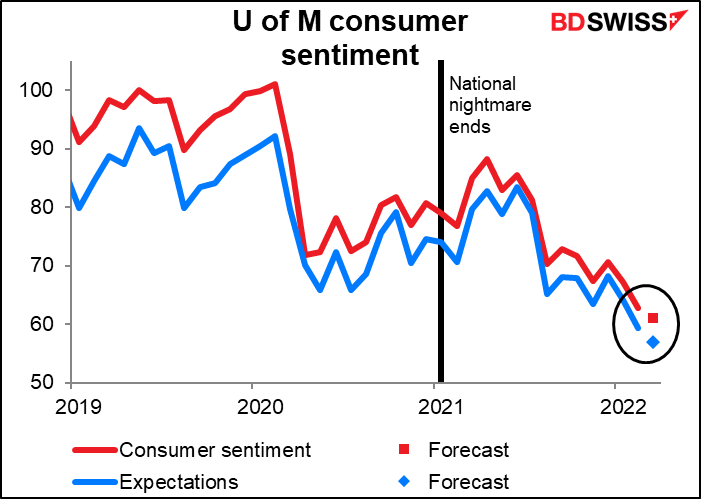 That’s because it emphasizes individual household finances, which are taking a hit from higher inflation (especially gasoline prices) and the falling stock market. 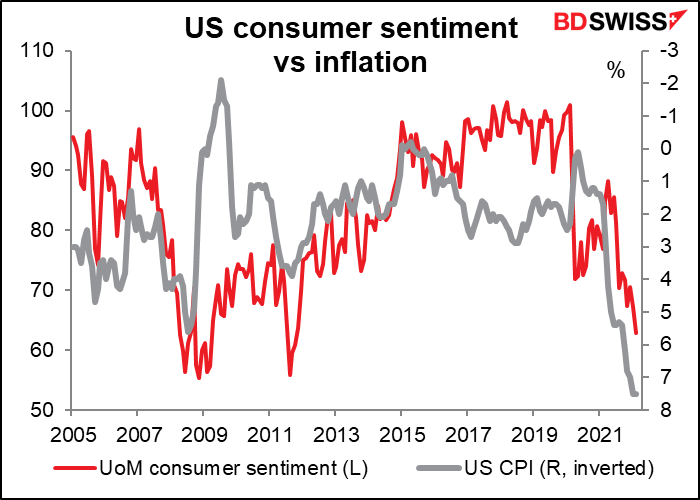 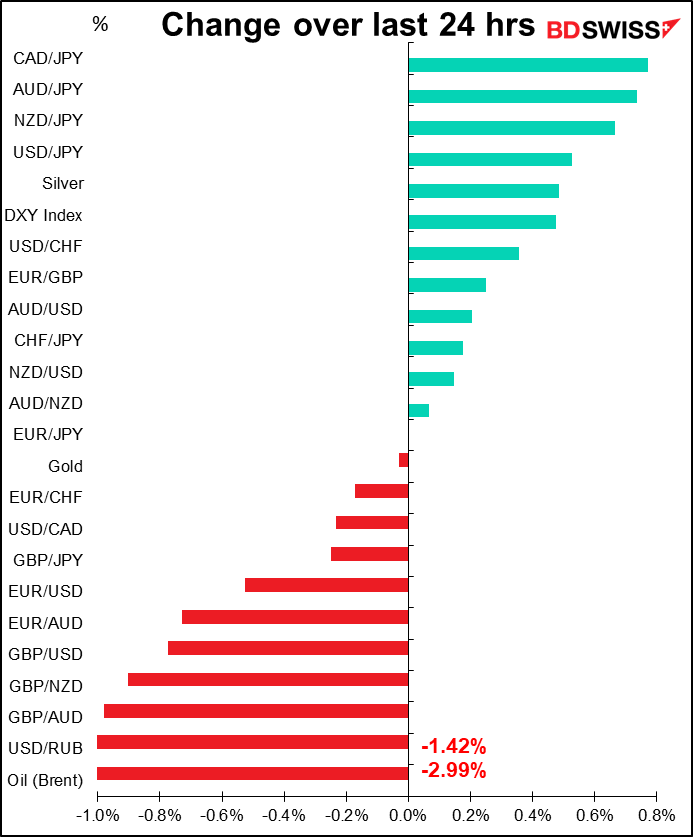