You are at:Home»Market Preview»USD Gains as Market finally Starts to Believe in Fed tightening; BoJ meeting 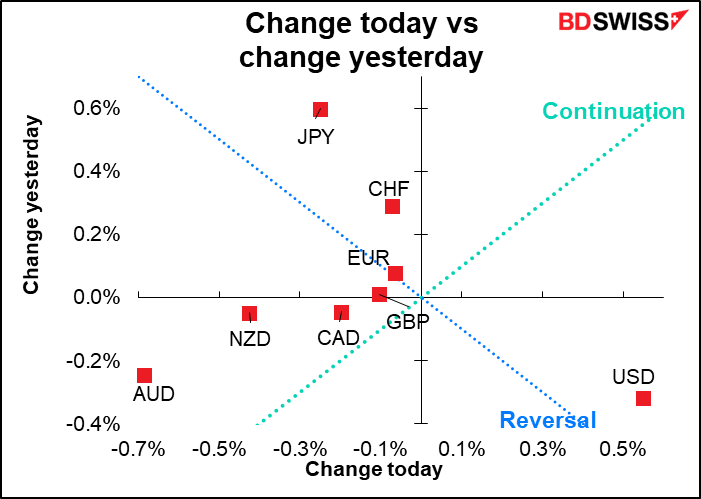 The big rally in USD Friday, continuing today, is somewhat confusing. Friday’s US economic indicators all missed expectations:  retail sales, industrial production, and the U of Michigan consumer sentiment survey all came in below consensus expectations. Nonetheless US bond yields move higher across the curve in a fairly parallel fashion (2-year yields +7.4 bps, 30-year yields +7.9 bps). Breakevens were little changed so this was a significant rise in real yields.

The rise in bond yields spread globally, but it doesn’t seem to have helped currencies besides USD. NZD and AUD bond yields rose substantially and yet those currencies were down more than JPY even though JPY yields were little changed.

The rise in bond yields seems to be that people are finally believing that the Fed is likely to move rapidly to tighten policy. New York Fed President Williams Friday said that the next step for monetary policy will be to bring the fed funds rate “back to more normal levels.” “Given the clear signs of a very strong labor market, we are approaching a decision to get that process underway,” he said. That would probably begin at the March FOMC meeting (the market now sees an 86% probability of a 25-bps hike at that meeting and even a 7.5% probability of a 50 bps hike). Meanwhile, the odds of two rate hikes by the June meeting are falling and the odds of three are rising. 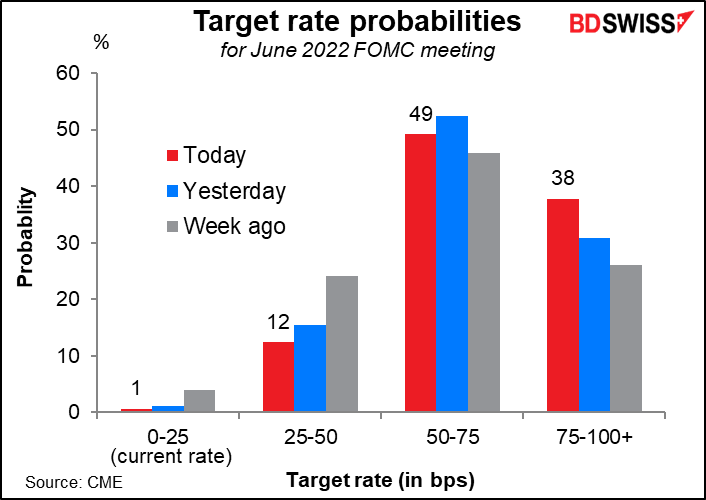 The big news of the day, China GDP, is already out. It was kind of odd; it showed a slowdown in growth on a yoy basis but an acceleration on a qoq basis. So which was it? Did growth slow or speed up? Most news outlets I saw, such as the Financial Times and Bloomberg, go with the yoy rate of change, which is what China historically emphasizes, and talk about slowing growth.

That seems to be how the Chinese authorities saw things too as the People’s Bank of China (PBoC), the central bank, cut its key interest rate by 10 bps to 2.85% from 2.95%, the first cut since April 2020. This follows a reduction in the Required Reserve Ratio (RRR) and a 5 bps cut in the one-year loan prime rate back in December. 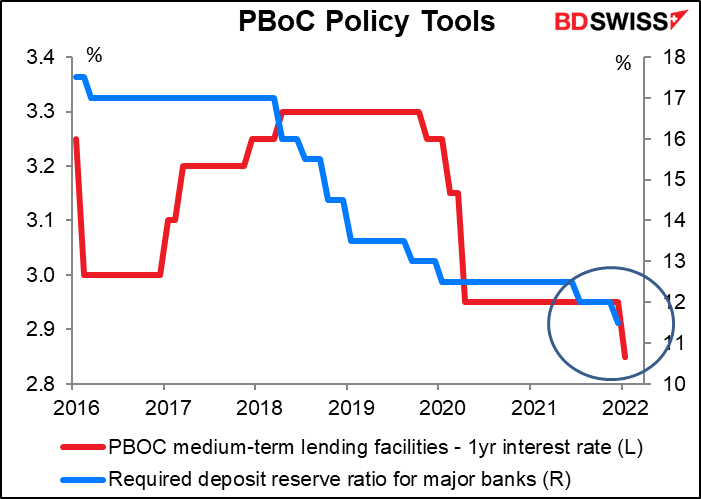 The outlook for the Chinese economy is unclear as the country continues with its zero-tolerance policy toward COVID-19 and imposes more stringent measures against the virus. 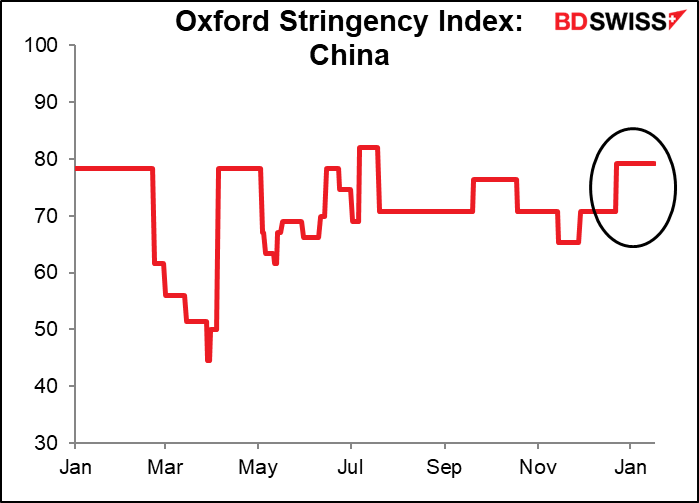 This is what the New York Times had to say this morning: 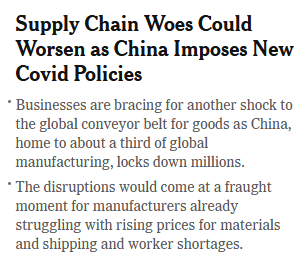 One is tempted to say that the weak China GDP is what hit AUD and NZD, but in fact both currencies fell on Friday and were little changed today. I have to confess that it doesn’t all make sense to me – US stocks were stable Friday (S&P 500 +0.08%, NASDAQ +0.59%) so it wasn’t a “risk-off” move pushing those currencies down. And oil prices continued to rise, hitting a two-year high, so we can’t say that commodities were weak either.

The continued rally in oil failed to boost CAD significantly too. The two moved mostly in tandem during the Asian and European days Friday but then when Canada opened for business, USD/CAD turned higher even though oil kept rising. There were no Canadian economic reports out to explain the move so I’m simply at a loss.

Hmm…The CoT Report shows that speculators increased their short JPY positions by a large 25k contracts. This just a few days before that Reuters story saying that the Bank of Japan might declare victory against inflation and start raising rates sometime in the next two years. No cause for immediate action perhaps but no cause to be increasing your short positions by 41%!

The next largest move was in GBP, where they cut their shorts by 10k contracts. Perhaps the likelihood of Boris being ejected from #10 is bullish GBP?

In fact they trimmed their shorts in all other currencies (except for JPY and AUD slightly), flipped to slightly long EUR from slightly short, and also cut their DXY longs a bit. Overall there was virtually no change in their net USD exposure, but I don’t think that’s the full story, I think they’re more bearish JPY and less bullish USD, which is natural as the dollar has been reacting less and less to the change in interest rate expectations. 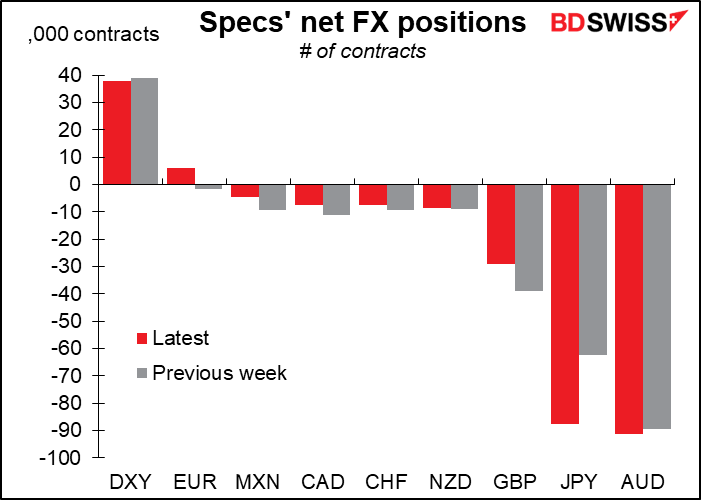 Hedge funds:  The increase in short JPY positions was mostly due to a big increase by hedge funds, who otherwise remain short currencies/long USD across the board although they trimmed most of their short positions. Short EUR is still their biggest position, in contrast to the overall speculators’ position. 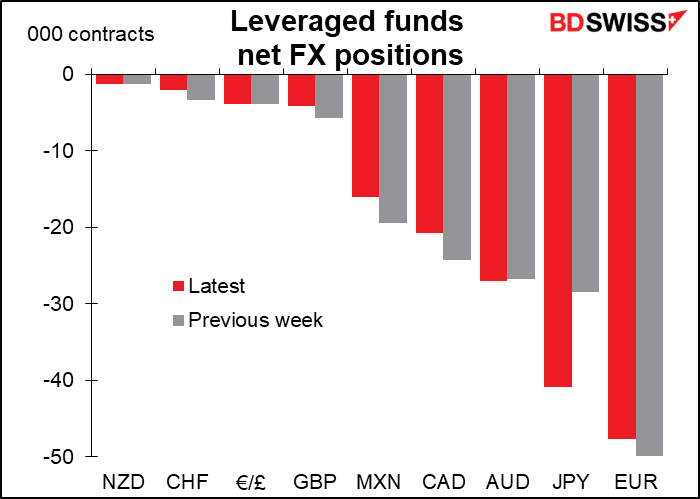 Retail:  Retail increased their CAD longs while increasing their CHF shorts. They also trimmed their GBP and JPY shorts. 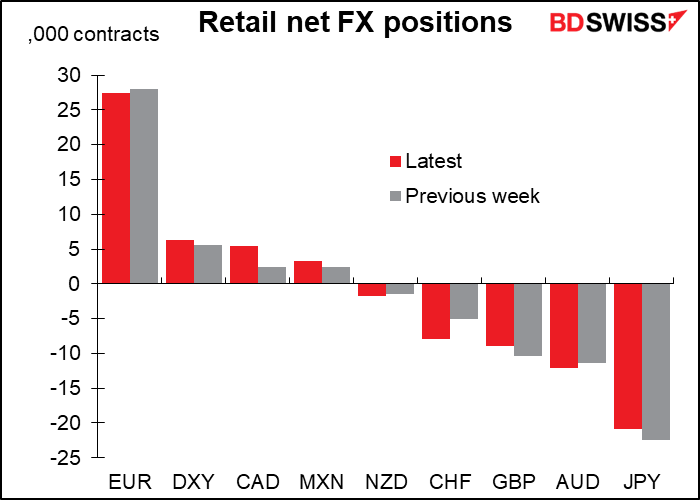 Precious metals: Specs trimmed their long gold and silver positions, but nothing significant. 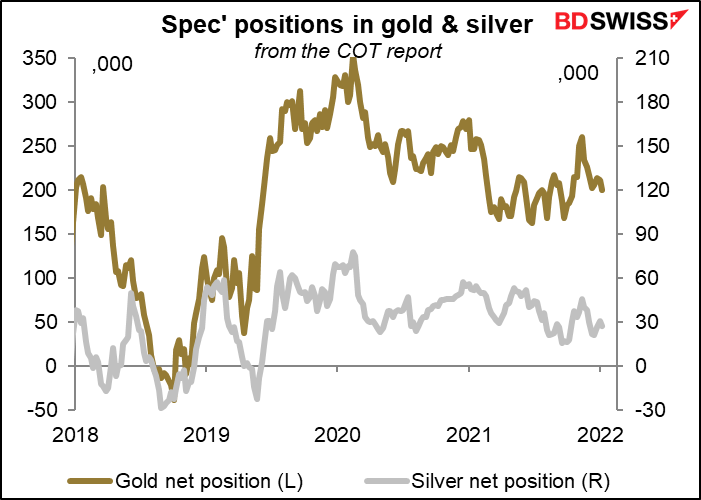 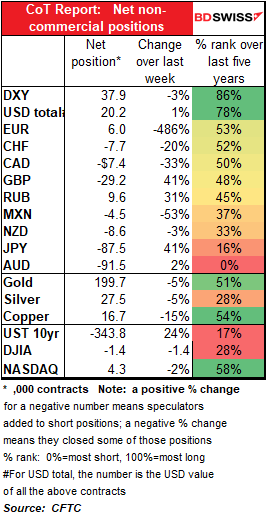 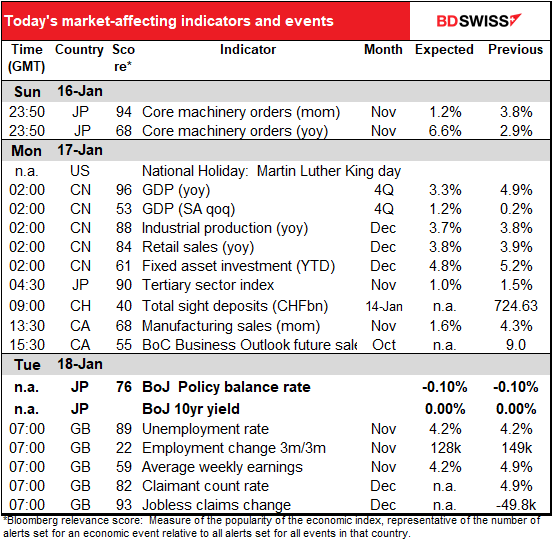 The weekly Swiss sight deposits have shown that the Swiss National Bank is starting to fight back! EUR/CHF has started to move higher, perhaps as a result. Will we see more action this week? Stay tuned! 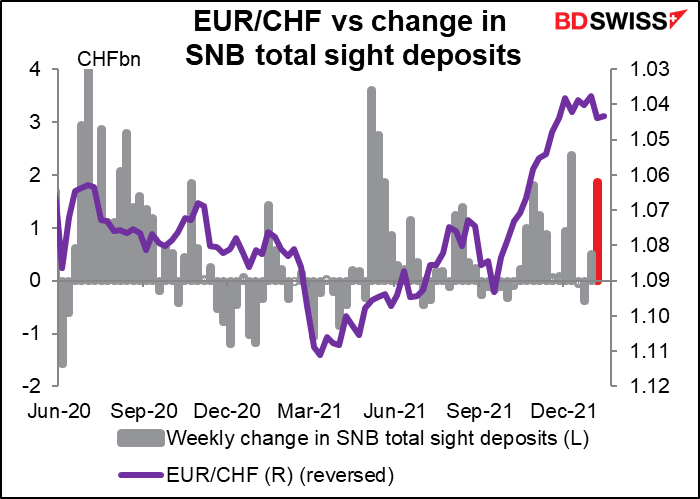 After that, nothing from the US today as it’s a national holiday, Martin Luther King Day. If you want to hear something stirring, listen to his “I Have a Dream” speech at the March on Washington for Jobs and Freedom on August 28, 1963. (The link is to an edited version that gives the highlights.) I wonder what he would think if he were alive today; would he think his dream has been realized by now? Hint: he also said that “We cannot be satisfied as long as a Negro in Mississippi cannot vote and a Negro in New York believes he has nothing for which to vote.” (You can read the speech here if you wish.)

There are a couple of second-tier indicators out of Canada. The Bank of Canada Business Outlook survey isn’t a big market-mover but the Bank of Canada is likely to take it into account when considering what to do. Notice that their survey on inflation expectations back in September showed that 45% of those surveyed thought inflation would be above their 1%-3% target range over the next 12 months while no one thought it would be below. Let’s see how that one comes out this quarter. Central banks always worry about inflation expectations becoming “unanchored” because they fear that can start an inflationary spiral (although recent research by an economist in the research division of the Fed Board has called the idea into question.) 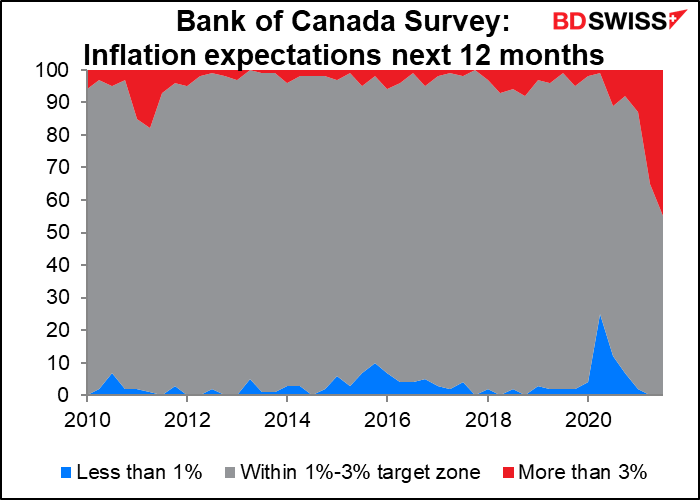 After that we wait for the Bank of Japan Monetary Policy Meeting (MPM) overnight and Gov. Kuroda’s press conference afterward. There’s no set time for the meeting to break up so it could meet up with the beginning of the European day.

I discuss the Bank of Japan meeting in some detail in my Weekly Outlook. According to a recent Reuters story, the Bank is feeling more confident about the outlook for inflation. Accordingly even if they don’t change policy, they could revise up the inflation outlook in their quarterly Outlook for Economic Activity and Prices and perhaps remove the part that says “risks to prices are skewed to the downside.”

They may also remove the downward bias in the forward guidance for policy rates that was introduced at the Oct. 2019 meeting. That would mean replacing the current statement that the Bank “expects short- and long-term policy interest rates to remain at their present or lower levels” with something like what they had before the change, namely “the Bank intends to maintain the current extremely low levels of short- and long-term interest rates for an extended period of time.” (That change was suggested in the aforementioned Reuters article.)

Investors will also be watching Gov. Kuroda’s press conference following the MPM for his views regarding the possibility of higher inflation and also on the implications of the weak yen for the economy and monetary policy. Historically the Japanese establishment has favored a weak yen as a way to promote exports, but recently officials have expressed more concern about the impact of a weak yen on consumers’ purchasing power now that Japan often runs a deficit on its merchandise trade account.

After that we wait for the morning in Britain and the UK employment data. The unemployment rate is forecast to be unchanged even as the number of people working rises – presumably that means a higher participation rate. 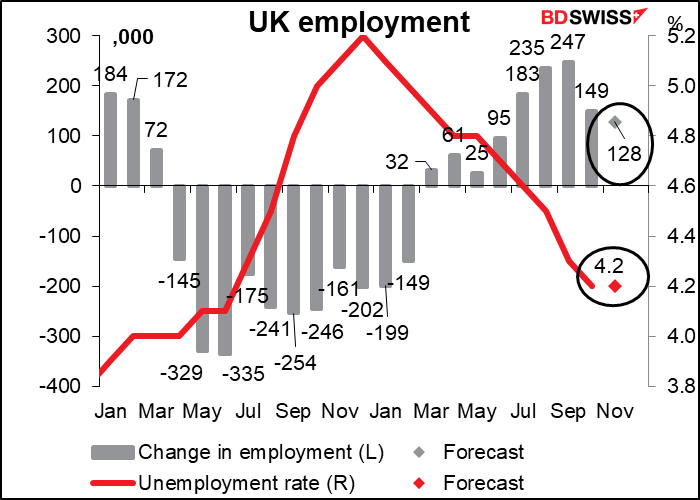 In Britain, like in America, the participation rate hasn’t come back even as the unemployment rate approaches pre-pandemic levels. It’s still a full percentage point below where it was before the pandemic (63.3 vs 64.3). 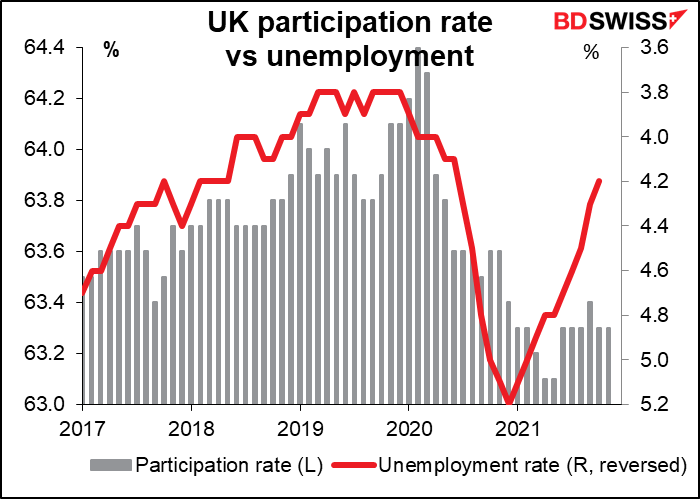 Growth in average wages is expected to slow but to remain higher than before the pandemic. In any case it’s expected to be below the rate of inflation, meaning on average people are taking a pay cut. This is in line with the Bank of England’s expectations. In the minutes to their December meeting they said, “Earnings growth was also expected to fall back from its current rate. As a result, inflation was projected to fall back materially from the second half of next year.” A rise in the pace of earnings growth, contrary to expectations, would therefore be a major surprise that could send the pound higher. 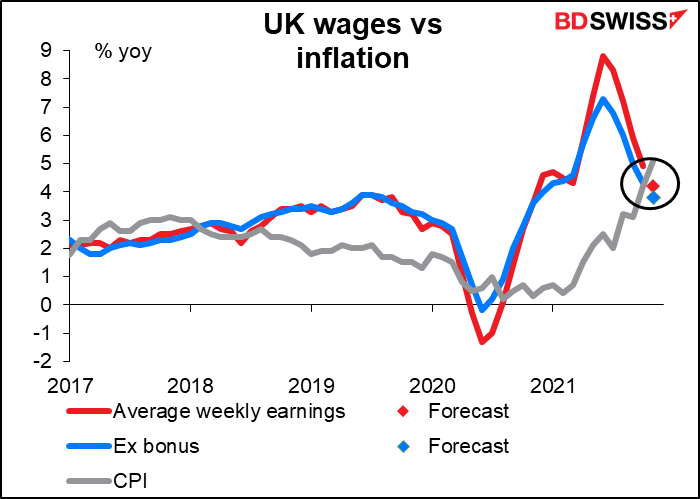 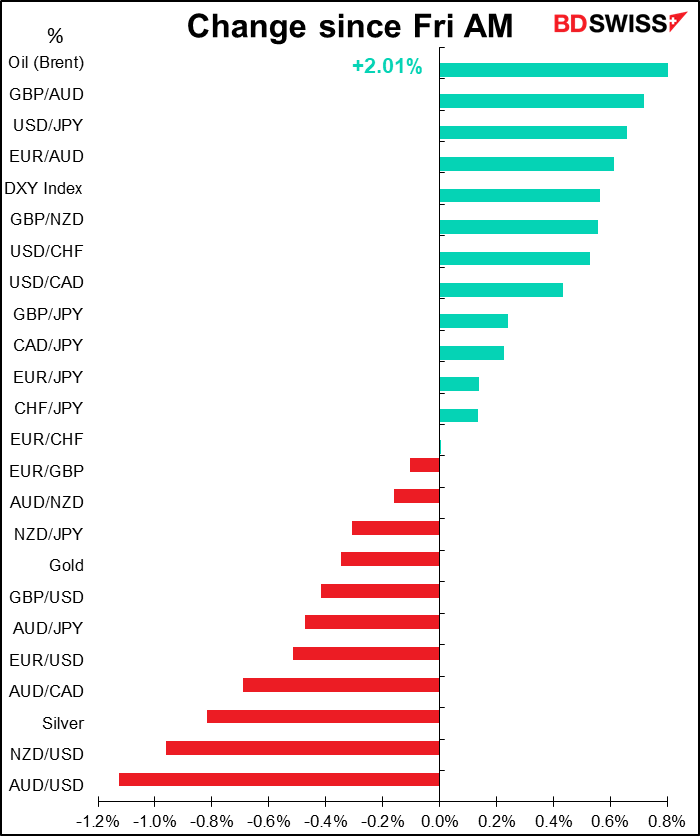