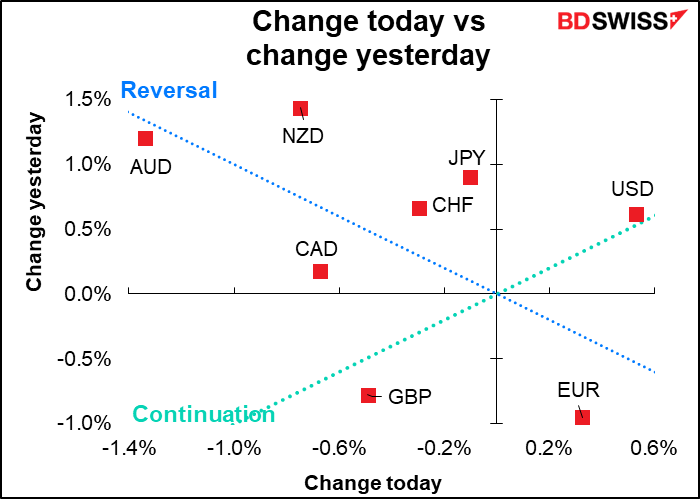 The market remains focused on the fighting in Ukraine and in particular its implicatios for commodity prices. Various commodities saw wild swings yesterday as market participants reacted to news and rumors.

Energy was particularly wild as investors first worried that the West might put a total embargo on Russian oil. German Chancellor Scholz came out against this idea however saying that oil and gas imports are of “essential importance.” The result was that although Brent hit a high of $139.13 early in the day it was trading this morning lower than it was 24 hours ago.

Dutch natural gas was up 80% on the day at one point.

With energy prices soaring, Spanish electricity prices rose 23% in one day. They’ve more than doubled in a week. Imagine the shock when you get your electric bill. No me digas! Que broma, chico!

The situation concerning Russian energy imports seems fluid, if I may use that term. Politicians may simply not want to anger their voters by raising energy prices, but voters may be angrier at Russia than at their heating bills. There was a survey in the German newspaper Handelsblatt that showed a majority of Germans support an immediate embargo on Russian oil and gas. The EU summit on Thursday will take up this issue. A new draft of the communique says the 27 EU member states want to “gradually reduce their dependency on Russian gas, oil and coal imports.” The European Commission’s climate chief will introduce plans to “substantially reduce” the Continent’s reliance on Russian gas.

Meanwhile back in the States, Congressional leaders agreed to ban Russian energy imports into the US regardless of what Europe does. President Biden hasn’t made a decision yet. It’s a lot easier for the US to act virtuously as it only imports about 700k barrels a day of oil from Russia out of the 11mn or so it uses.

The other star of the show yesterday was nickel, which jumped by an astonishing 63% on the day (up 88% at one point). Russia accounts for around 7% of global production of nickel, which is used to make stainless steel and batteries for electric vehicles.

Also astonishing was that other metal prices actually closed lower! (Copper, aluminum, tin, lead) That’s probably why the commodity currencies generally weakened. EG AUD/USD followed copper prices higher and then lower during the day. The thought is that the sharply higher prices for some commodities, especially energy, are likely to dampen growth and therefore dampen demand for other commodities.

With energy prices soaring, inflation estimates soared as well. The US 2- and 10-year breakeven inflation rates hit record highs (4.33% & 2.85%, respectively). Same with Germany, although the data I have there only goes back for 10 years. 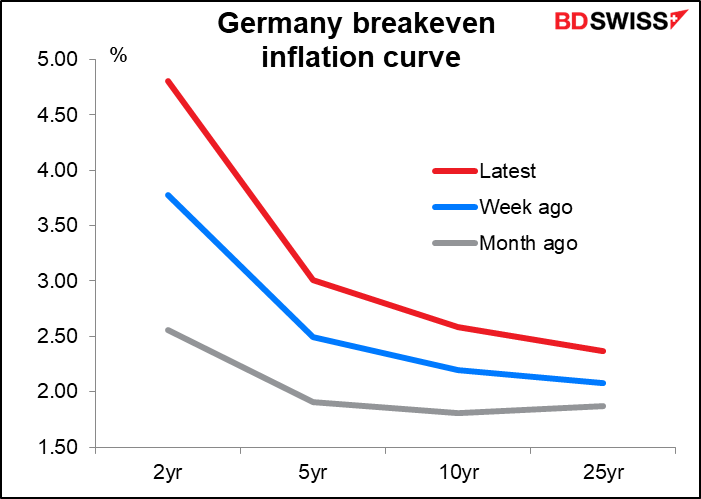 That sent bond yields up too. Bonds are no hedge against falling stock prices in this environment.

But bond yields didn’t go up as much as inflation expectations did, meaning that real yields fell in most markets.

So despite all the fears of central banks withdrawing stimulus, real interest rates are near or at record lows! 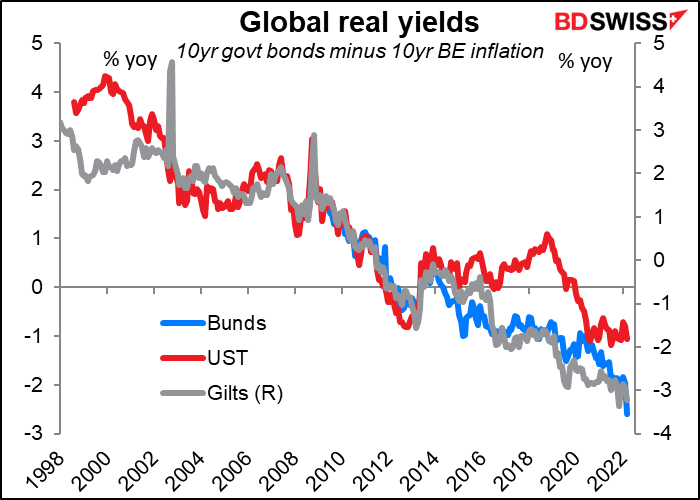 There was a big flight to safety move in the markets, with JPY and CHF outperforming the commodity currencies. USD proves to be the safest haven of all. Rising bond yields provide no support for GBP.

EUR gained though as the Swiss National Bank issued a statement to remind the market that “The franc continues to be highly valued…The central bank is still ready to intervene in the foreign exchange market if necessary.” Although it said “individual currency pairs don’t play a special role,” I find that hard to believe. The timing of the statement – shortly after EUR/CHF broke parity – also belies that. 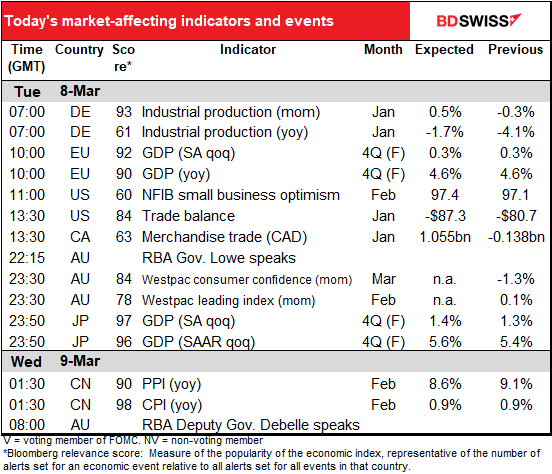 We’ve already had the German industrial production figures. The final version of the EU 4Q GDP figures are rarely revised, and if they are it’s only by 0.10 percentage point so it usually doesn’t matter.

In the US, the National Federation of Independent Business (NFIB) small business optimism survey is important, but the most important point of it – the “hiring plans” diffusion index – is already out, diluting the impact of the overall figure. Most people in the US who don’t work for Walmart or the government work for small businesses, so their hiring plans are important for the labor market.

The hiring plan index is the percent of companies saying they intend to increase employment over the next three months minus the percent that say they intend to decrease employment. From 2005-2019 the average was around 10, so the February level of 19, although down sharply from 26 in January, is still on the strong side. But down sharply nonetheless. But that may have something to do with the “job openings hard to fill” DI, which hit a record high of 51 in September and has come down only to 48. Perhaps they’re just giving up trying to hire people because it’s too hard. 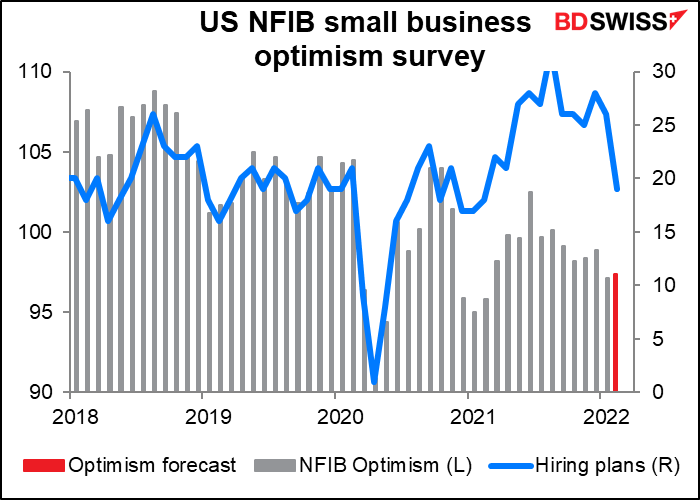 The US trade balance – more accurately, the US trade deficit, since it’s been decades since the US has had a trade surplus — is expected to widen by $6.6bn. Oddly enough the advance trade deficit was $7.2bn wider. It’s no surprise that the two move in tandem, there’s a 93% correlation between them. According to the data, the US surplus in services is rising, which is offsetting some of (but not all) the widening deficit in trade in goods.

Overnight, the final revision of Japan’s 4Q GDP figures will probably suffer greater revision than the Eurozone’s will, but probably no one will care anymore. Given the rapid changes in the world – the virus plus the enormous rise in commodity prices – Q4 2021 might as well be a decade ago insofar as the financial markets are concerned. Anyway Japan’s GDP figures are notorious for being revised over and over again. We won’t find out what the real final figure is for about two years. 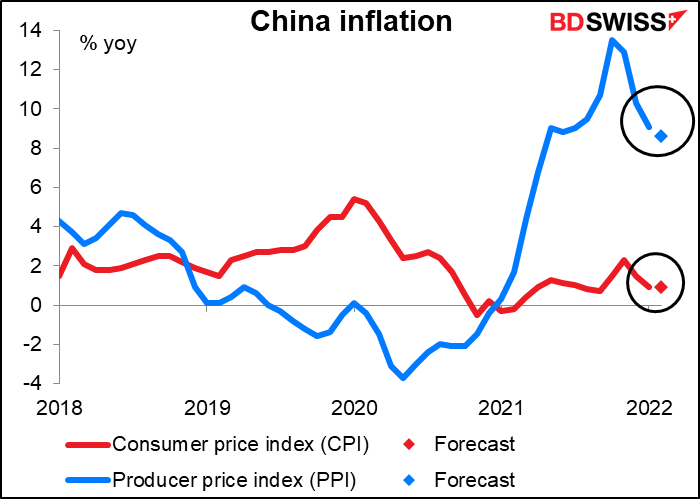 China’s CPI has benefited from a fall in food prices – not just a fall in the rate of increase, but an actual fall in prices. One doubts whether that will persist for long. Nevertheless, note that it’s producer prices that matter for other countries, not consumer prices – China’s PPI is a big component of other countries’ import price index. So slowing inflation there is good news even if it is just slowing modestly to a still-high rate of increase. 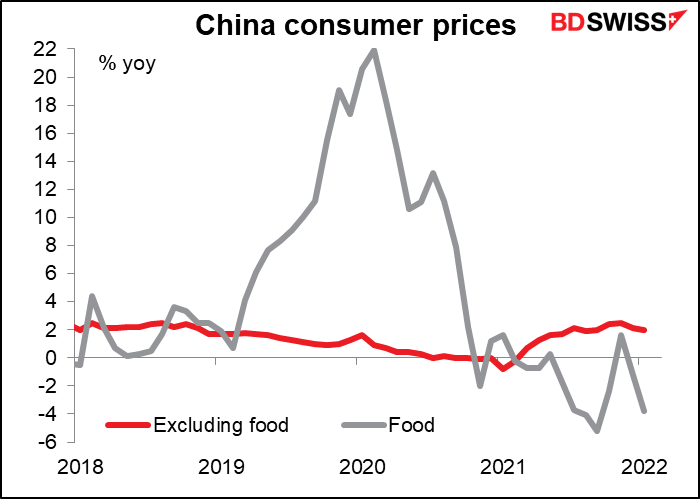 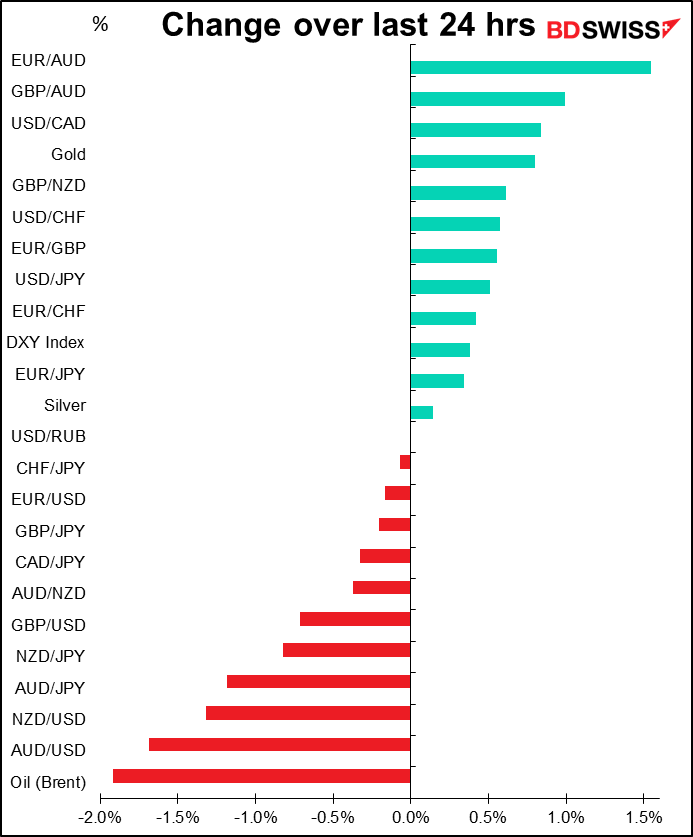