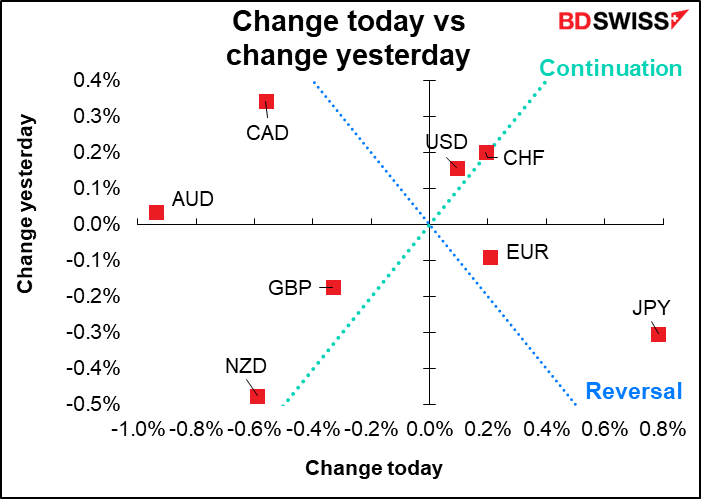 We’ve been watching with trepidation the increase in virus cases in Europe. Now comes something else to worry about. According to Bloomberg, scientists in South Africa are studying a new coronavirus variant that officials there say is of « serious concern. » The discovery, called B.1.1.529, carries an unusually large number of mutations and is “clearly very different” from previous incarnations.

As this graph from the Financial Times shows, the variant seems to be much more efficient than previous variants. We don’t know yet whether it’s more harmful though. 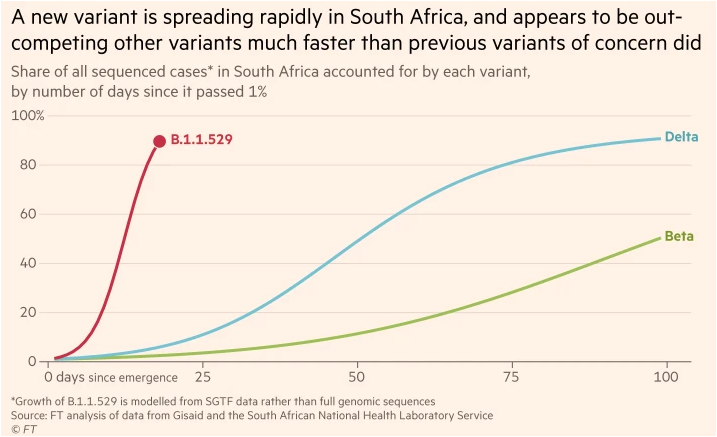 According to the South African Center for Health Journalism, some of the mutations of the B.1.1.529  variant are situated around the spike protein that might affect how well our antibodies neutralize the #SARSCoV2 virus (so it might escape immunity to some extent). Some of these mutations look similar to mutations that have been found to enhance other variants’ transmissibility.

The World Health Organization (WHO) called a meeting on Friday to discuss B.1.1.529 and decide if it will be officially designated a « variant of interest or concern. » If it does, it will receive a Greek letter name under the WHO naming scheme, likely the letter « nu. » Governments will likely also be taking action on border and travel controls in response to news of the variant. The UK has temporarily banned flights from South Africa while Singapore and Israel have banned visitors from the country. The fear is that as the variant spreads, these bans could spread to other countries as well, once again sending world travel  — and oil demand — into a tailspin.

South Africa’s caseload is currently quite low, both relative to its past and relative to other countries, but we’ve all learned how quickly that can change with exponential growth. 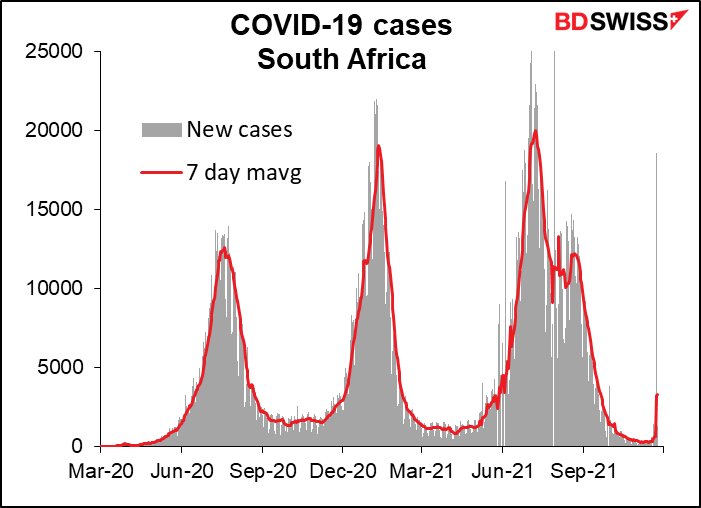 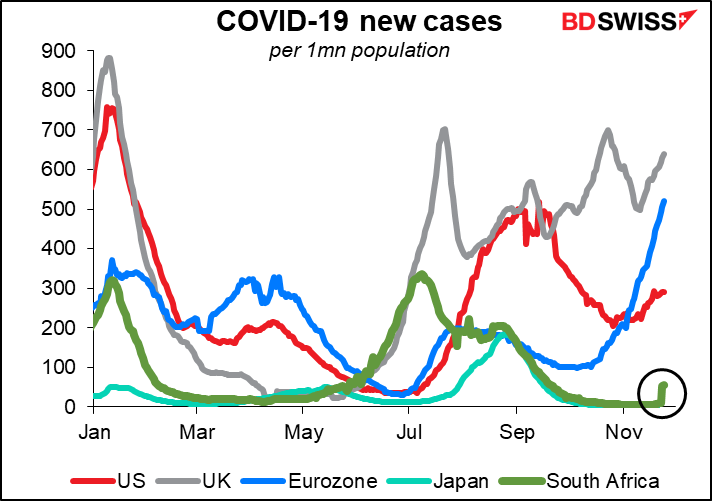 I’m not a doctor so I can’t give an opinion on whether this new variant is anything to worry about. Mutations can be more or less severe, we don’t know yet.

But of course we don’t need no doctor to know how this plays out in the markets: risk aversion. The growth-sensitive commodity currencies down, safe-haven JPY and CHF up.

It was notable that USD wasn’t included in the safe-haven currencies this time, perhaps in recognition of the country’s poor performance in the vaccine ratings – bottom of the list among the major industrial countries. Although Switzerland is next-to-last and has a much higher infection rate than the US (690 new cases a day per 1mn people vs 290 cases for the US), so clearly « safe haven » doesn’t necessarily mean safe from infection. 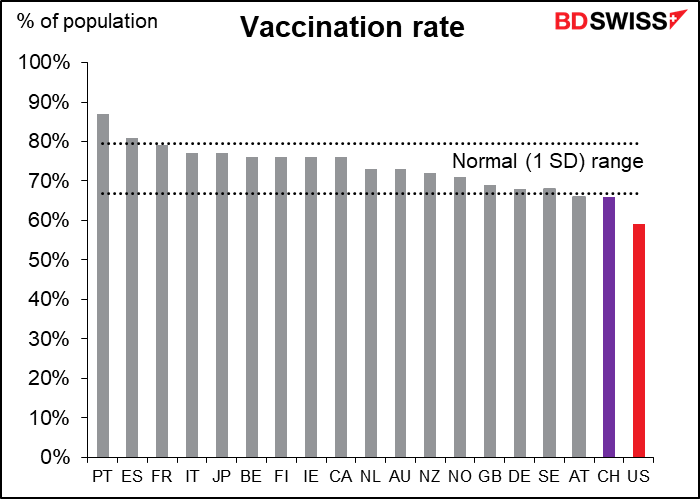 It was also noticeable that CAD outperformed AUD despite the 2.7% fall in the price of oil. AUD is apparently the barometer of world economic activity and as usual AUD/JPY is the barometer of risk appetite.

News of the new variant and risks to global travel (as well as more domestic lockdowns) are certain to be topics of discussion at next Thursday’s OPEC+ meeting. The cartel was already expected to consider pausing its schedule of output increases (« reverse tapering? ») in retaliation for the US and six other oil-consuming nations deciding this week to release oil from their Strategic Petroleum Reserves. The risk to oil demand from another increase in virus cases globally is another reason for them to consider pausing. Expect more volatility in oil as the date approaches.

Ultimately the real fear is that if the variant spreads internationally, it could start to hit supply chains, e.g. cause semiconductor plants to shut down or ports to close due to a lack of workers, and boost inflation while dampening growth. But that’s a few weeks down the line – we’ll have to hear what the WHO has to say.

If you thought things were quiet yesterday…

The big thing today isn’t that big, at least not for us – it’s the ECB Legal Conference 2021. It started yesterday but there was nothing significant for the markets, except maybe a 10-minute introductory speech by ECB President Lagarde, which I didn’t even bother putting on the schedule. Today she’ll talk for half an hour. There will also be a panel discussion on Relationship between law and markets chaired by the ECB’s Isabel Schnabel and one Digitalisation of finance: the challenges from a central bank and supervisory perspective, chaired by the ECB’s Fabio Panetta.

Aside from that, the riveting EU money supply data will tell whether there’s been any pick-up  in lending (or borrowing, depending on how you want to look at it). Most of the lending nowadays is for mortgages; other borrowers are pretty inactive. I’m sure that’s not what the ECB would like to see. Corporate borrowing did pick up a bit, but still remains sluggish. The figures are significant in that they’re the last bank lending data before the December ECB meeting and so will feed into their decision on asset purchases and lending. 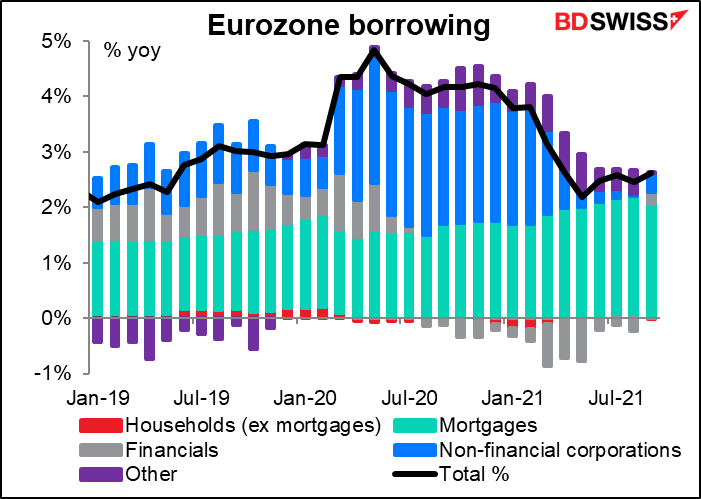 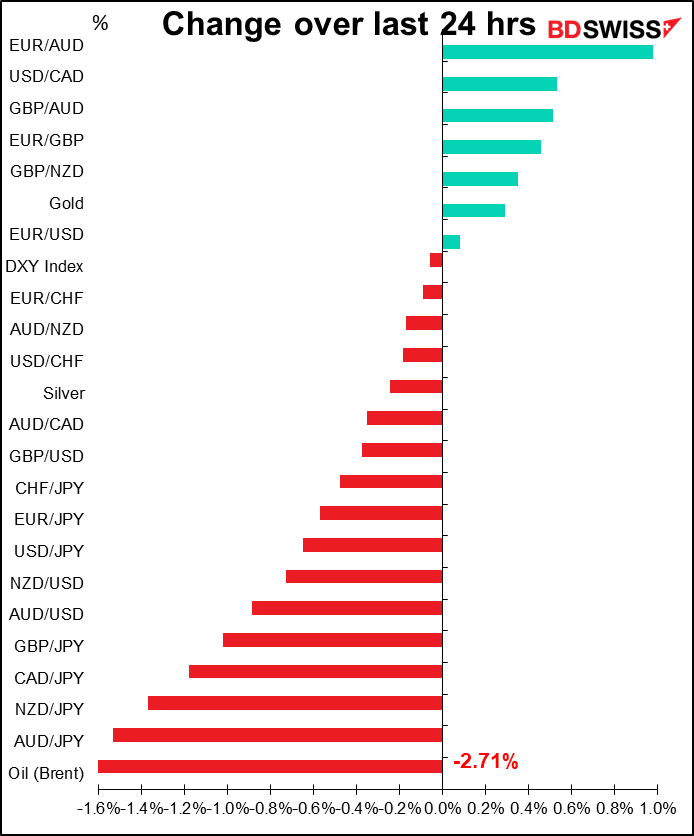